Wheeler Cruises to Group A Qualifying Round Win at Stage Three 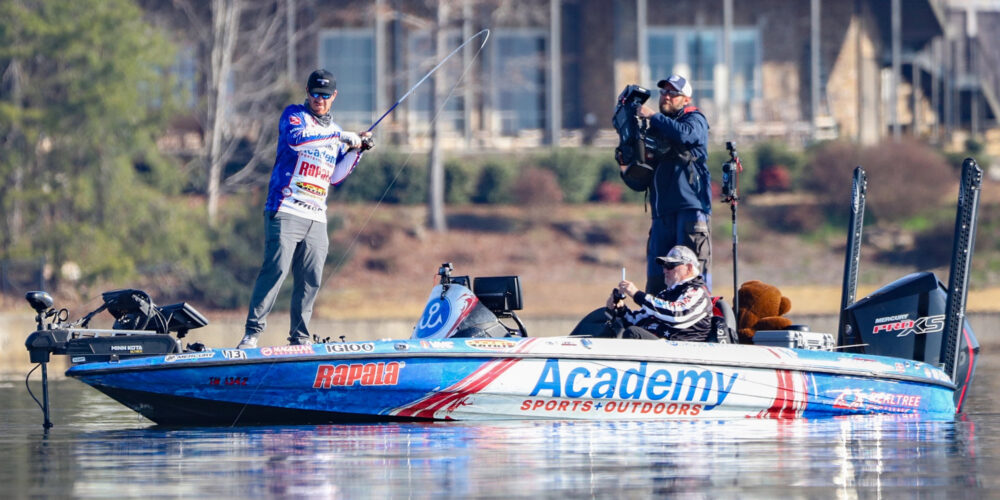 CULLMAN, Ala. – Academy Sports + Outdoors pro Jacob Wheeler of Harrison, Tennessee caught 11 scorable bass weighing 23 pounds, 12 ounces to earn the win Friday and advance directly to his seventh straight Championship Round at the Favorite Fishing Stage Three on Lewis Smith Lake Presented by Mercury in Cullman, Alabama. This will mark the fourth time Wheeler has earned an automatic berth to the Championship Round on the Bass Pro Tour.

The six-day event, hosted by Cullman Parks, Recreation and Sports Tourism, Cullman County Parks and Rec and the Cullman Area Chamber of Commerce, showcases 80 of the top professional bass fishing anglers in the world competing for a total purse of $805,000, including a top cash prize of $100,000 to the winner.

“Suspended fish can be one of the toughest to catch,” Wheeler said. “I targeted a lot of suspended fish today with the Rapala Jigging Rap and a (Storm) Largo Shad. I had a solid lead going into today, so I was just trying to figure out if there was a pattern to it. I figured out some areas and things that helped me dial in and find the bass a little quicker. Overall, it seems to be less of a pattern and more of a zone that I need to target on Monday.”

Wheeler is sitting in a great spot once again, with two days off and the entire weekend to rest and put his game plan together for the Championship Round.

“It’s been a good week so far,” Wheeler said. “We finished on top, and it feels great to advance straight to the Championship Round.

“I know a lot is going to change between now and then, so I’ll probably rig up a mixture of rods and be ready to try a variety of techniques when we get back out here on Monday. Obviously, the docks will definitely play more down the lake, but with the conditions we are expecting, I’ll just have to pay attention to what the weather is doing.

“We’ll sort of hodge-podge it up,” Wheeler said. “I guarantee you it’s going to be a hodge-podge kind of day on Championship Monday.”

There was additional excitement around the Toro Cut Line during the final period, with pro John Murray of Spring City, Tennessee, beginning the third period in 32nd place before catching a flurry of 14 bass weighing 20-12 to catapult into 10th place.

“Man, what a struggle today,” VanDam said. “I went the whole first period and didn’t catch a scorable bass, despite running some really good stuff. I’m just thrilled to be moving on to the Knockout Round and to have a chance to continue fishing this event.

“Obviously, some of the other guys have really got something figured out, but on this lake, anything can happen at any point. I’ve had some pretty good flurries and have seen what’s possible here, so that’s what we’re going to be shooting for in the Knockout Round.”

Bass Pro Tour newcomer Jeremy Lawyer of Sarcoxie, Missouri was sweating it out during his first time on the Toro Cut Line before finishing the day in 20th place.

“I’m the last guy in, and it was a grind today – that third period just chewed me up,” Lawyer said. “I had a game plan of sticking with the docks and finesse-fishing around the docks with a couple of little swimbaits on a Freedom Lures Swimbait Head, and almost got caught. But that’s the best thing about the Bass Pro Tour – when we start on the water again on Sunday, we’re all even. Doesn’t matter if you’re first or 20th. I’m just thankful to be out here and to go see what we can do in the Knockout Round.”

The Top 20 anglers from Group A will now enjoy an off day, while the 40 anglers in Qualifying Group B will complete their two-day Qualifying Round of competition on Saturday. The Knockout Round, featuring 38 anglers competing to finish in the Top 8, will take place Sunday. Monday’s Championship Round will feature Wheeler, Saturday’s Group B winner, and the Top 8 anglers from the Knockout Round competing in a final-day shootout for the top prize of $100,000.

The Top 20 pros in Qualifying Group A that now advance to Sunday’s Knockout Round on Lewis Smith Lake are:

Overall, there were 300 scorable bass weighing 616 pounds, 12 ounces caught by the 40 pros Friday.

The 40 Anglers in Group A competed in their two-day qualifying round on Wednesday and Friday – the 40 anglers in Group B on Thursday and Saturday. After each two-day qualifying round is complete, the anglers that finish in second through 20th place from both groups advance to Sunday’s Knockout Round, while the winner of each group advances directly to Monday’s Championship Round. In the Knockout Round, weights are zeroed, and the remaining 38 anglers compete to finish in the Top 8 to advance to the Championship Round. In the final day Championship Round, weights are zeroed, and the highest one-day total wins the top prize of $100,000.

Anglers will launch each day at 7:30 a.m. from the Smith Lake State Park, located at 403 County Road 386 in Cullman, Alabama. Each day’s General Tire Takeout will be held at the park, beginning at 4:30 p.m. Fans are welcome to attend all launch and takeout events and also encouraged to follow the event online throughout the day on the MLF NOW! live stream and SCORETRACKER® coverage at MajorLeagueFishing.com.

The Favorite Fishing Stage Three on Lewis Smith Lake Presented by Mercury features anglers competing with a 1-pound, 8-ounce minimum weight requirement for a bass to be deemed scorable. Minimum weights are determined individually for each competition waters that the Bass Pro Tour visits, based on the productivity, bass population and anticipated average size of fish in each fishery.

The MLF NOW! broadcast team of Chad McKee, Marty Stone and J.T. Kenney will break down the extended action on all six days of competition from 7:45 a.m. to 4:30 p.m. CT. MLF NOW!  will be live streamed on MajorLeagueFishing.com and the MyOutdoorTV (MOTV) app.

Television coverage of the Favorite Fishing Stage Three on Lewis Smith Lake Presented by Mercury will premiere at 7 a.m. ET, Oct. 1 on the Discovery Channel. New MLF episodes premiere each Saturday morning on the Discovery Channel, with additional re-airings on the Outdoor Channel. Each two-hour long reality-based episode goes in-depth to break down each day of competition.