Wheeler Leads Group B After a Chilly Day on Lake Eufaula 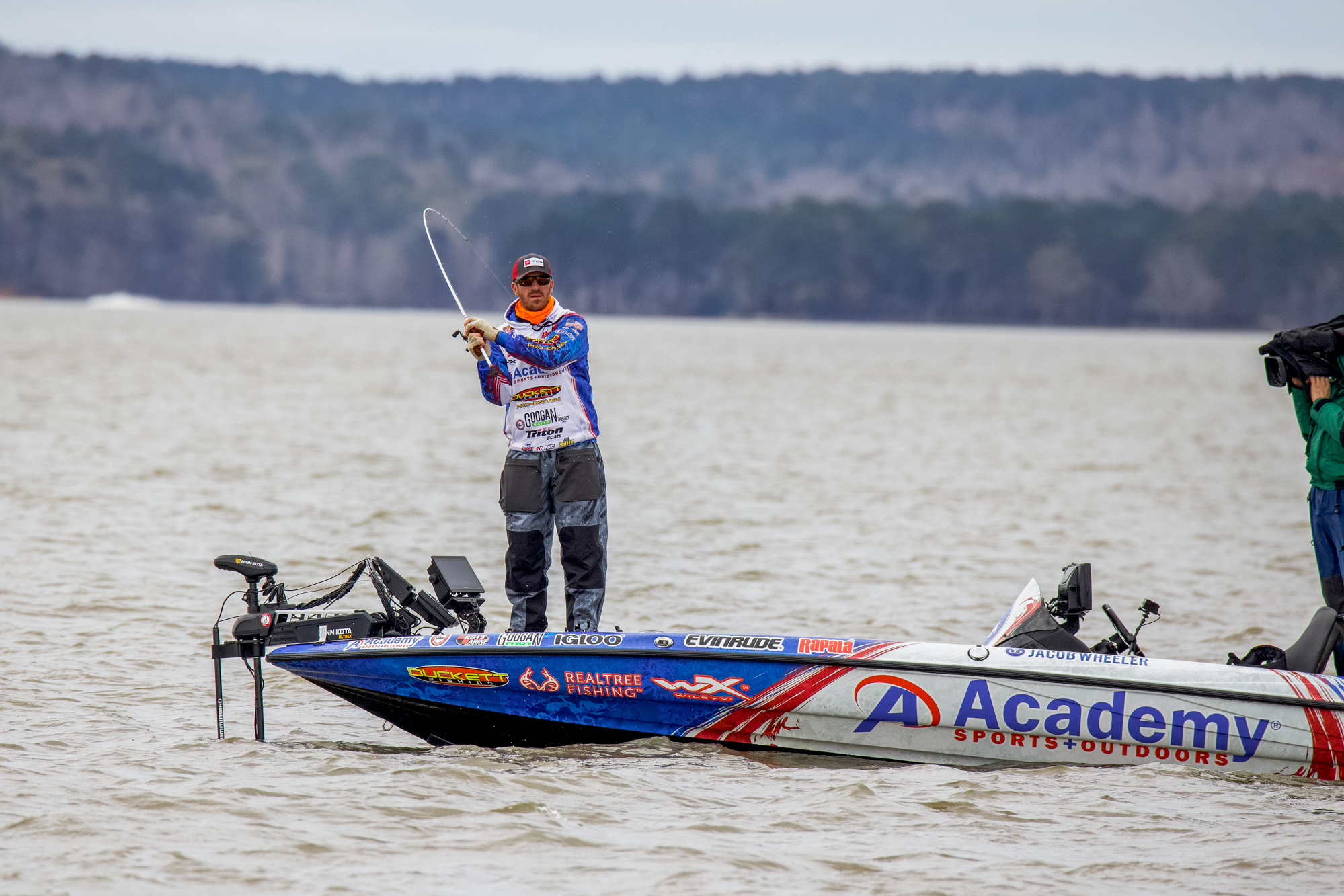 Jacob Wheeler maintained his early lead, ending the round with 42 pounds, 5 ounces, nearly 10 pounds ahead of second place. Photo by Jesse Schultz

February 8, 2020 (Eufaula, Ala.) – Jacob Wheeler, 2019 MLF General Tire World Champion, assumed the lead from Bobby Lane early in day two of the 2020 Bass Pro Tour and never looked back, finishing in first place with 15 scorable bass totaling 42 pounds, 5 ounces. The B&W Trailer Hitches Stage One Presented by Power-Pole opened for the anglers in Group B on Lake Eufaula with chilly temperatures in the mid-30s and rain throughout the day. Wesley Strader finished second with nine fish totaling 36-6. Justin Atkins earned the Berkley Big Bass of the day award with a 6-13 largemouth, while MLF rookie David Dudley rose to fifth by the end of the day.

Indiana native (Tennessee resident) Jacob Wheeler caught Floridian Bobby Lane, brother to Group A leader Chris Lane, at 9:30 a.m. local time. Fishing a mainly offshore pattern with a variety of tactics, the Academy Sports pro went against the grain in a tournament where most of the other anglers were beating the bank and targeting shallow cover.

“Today was a great day, and I was fortunate to catch them on a rotation of baits, but I’m still trying to figure out what’s going on the lake,” Wheeler said. “You have to keep an open mind because each day is unique this time of year, and you have to start over every morning.”

Fellow Tennessean Wesley Strader finished second by a spread of 6 pounds, one1 ounce and the only angler within striking distance of Wheeler. The 48-year-old angler with a rich history of FLW wins before joining the Bass Pro Tour in 2018 found that the high water impacted his ability to advance further.

“It was a really good day, but it could have been even better,” Strader admitted. “I wish the water would drop a little bit because that will pull some more fish out of the thick cover, and I think I can get more bites doing what I’m doing.”

MLF rookie David Dudley showed that he can compete well in all fishing formats by finishing in fifth place with six bass totaling 22-15. Today was the first day Dudley competed using the catch-weigh-immediately release format and rules.

“It was a fun day,” recapped Dudley. “I loved SCORETRACKER® and kept telling my official all day to give me another update. I like hearing that people are catching or not catching fish, because it helps me process my day.”

Despite remaining scoreless until Period 3, Kevin VanDam rallied to finish 13th overall with four fish weighing in at 13-11.

The competition continues Sunday as Group A returns to finish the Qualifying Round. Chris Lane hopes to retain his lead and earn the automatic Championship Round berth. New for 2020, the winner of each Group in the Qualifying Round advances directly to the Championship Round. The weather forecast calls for a slightly warmer day calling for a high of 65 degrees with no rain in the forecast.

The Bass Pro Tour began in 2019 and features 80 of the best professional anglers in the world, including Kevin VanDam, Edwin Evers, Aaron Martens, Mike Iaconelli, Jordan Lee, and Skeet Reese. Each stage includes six days of competition using the Major League Fishing catch-weigh-and-immediately-release format, where every bass over a variable minimum weight, which is two pounds on Lake Eufaula for Stage One, toward a cumulative weight total for the day. Variable minimum weights are determined by fishery akin to a golf course handicap. The field of 80 anglers is divided into two groups of 40 to compete on days one and two respectively for the Qualifying Rounds. On days three and four, the field is culled based on a combined 2-day total weight from each angler’s Qualifying Rounds. The winner of each Qualifying Round advances automatically to the Championship Round. The Top 18 anglers from each group in the Qualifying Round (38 total) advance to the Knockout Round on day five, which determines who will compete on that final day, the Championship Round, for the Stage title and $100,000.

In addition to the economic impact on a host community, Major League Fishing showcases the region through their award-winning, live and linear programming. Each Stage of the Bass Pro Tour is broadcast live on the Major League Fishing app, MyOutdoorTV (MOTV), and MajorLeagueFishing.com, totaling more than 325 hours of original programming. Fans can follow the fast-paced nature of the MLF format as it unfolds on the live leaderboard through SCORETRACKER® updates. Highlights from each Stage of the 2020 Bass Pro Tour will air on Discovery beginning in July 2020 and Sportsman Channel in early 2021.