38-Angler Knockout Round Set for Tuesday 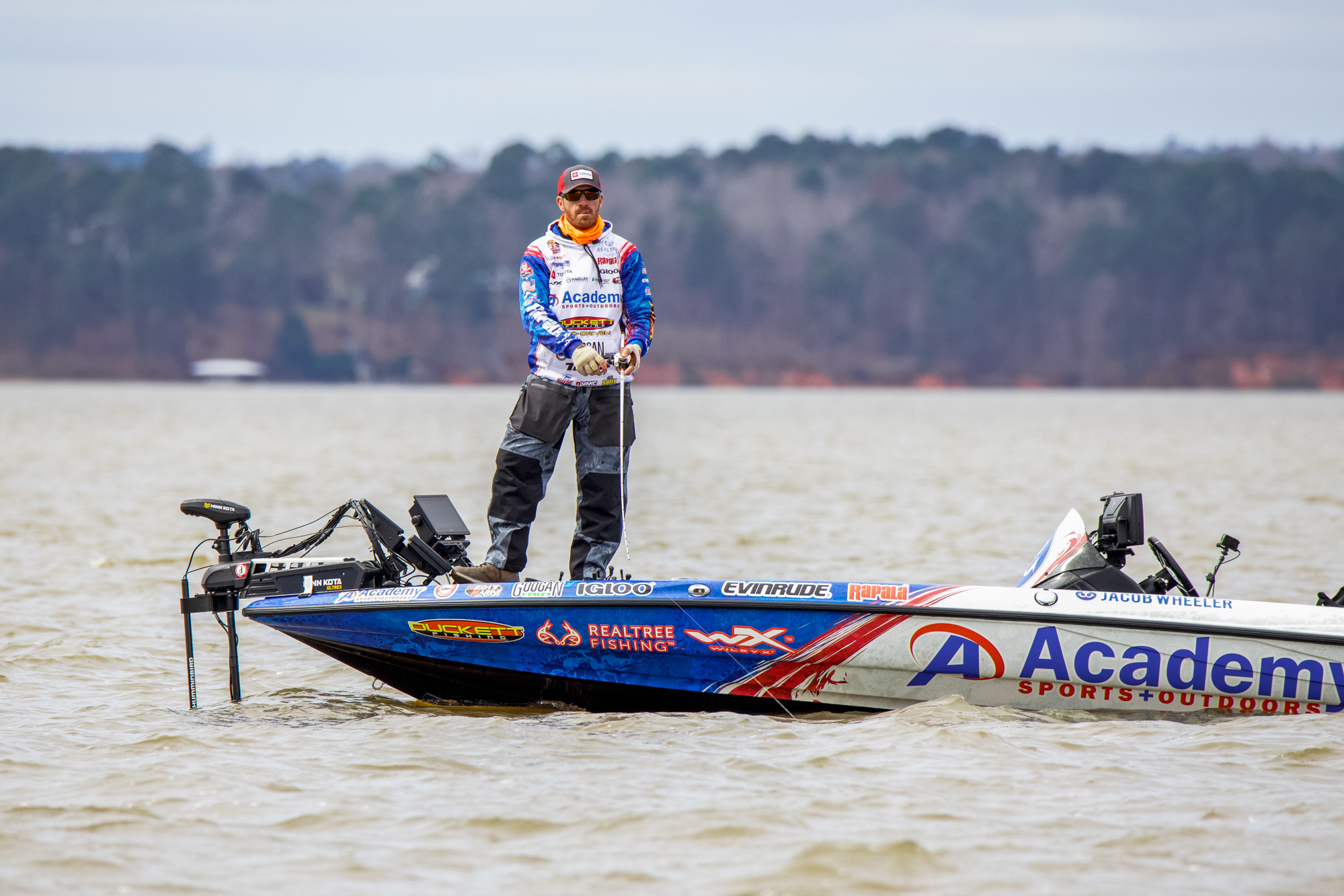 February 10, 2020 (Eufaula, Ala.) – Jacob Wheeler, 2019 General Tire World Champion, held onto his lead over Group B despite a valiant run by Randall Tharp who rose into second place by day’s end. Wheeler began day two nearly 10 pounds ahead of Wesley Strader and a 14 pound, 8 ounce lead over Tharp but today was a tougher day for the Academy Sports pro who only caught 9 pounds, 1 ounce in three periods. As the winner of Group B, Wheeler advances directly to Wednesday’s Championship Round and receives a minimum payout of $12,000 as one of the Top 10.

“I’m going to have to change up a couple of things going into the Championship Round,” said Wheeler. “Today was a tough day; I just could not get those fish to bite; I could literally see them and not get them to bite.”

The drama of B&W Hitches Stage One Presented by Power-Pole unfolded live on MLF NOW! as the field changed with each catch. Mike Iaconelli kicked off the day with a 6-13 largemouth only six minutes after lines in. He went on to catch two more over 5 pounds (23-03 total), rising from 40th place and zero pounds on Saturday to 18th place today, thus securing a spot in the Knockout Round on Tuesday.

“Just goes to show you, never give up,” reflected Iaconelli during his interview on the General Tire Takeout as he returned to the ramp. “To be able to salvage the points to fish another day, that is a good thing.”

Randall Tharp contributed to today’s storyline as he narrowed the gap to within 8 ounces. In the final minutes, Tharp caught what turned out to be an unscorable bass just shy of the 2-pound minimum required per MLF rules preventing him from taking the lead.

“I wasn’t planning on exerting myself much today but ended up fishing pretty hard in Period 3,” Tharp said. “For about an hour, I was one bite away from winning the round.”

Instead of getting a day off and an automatic berth to the Championship Round, Tharp will head back to Lake Eufaula for Tuesday’s Knockout Round.

“I have enough history here that I would rather have the day off, but that day of fishing tomorrow could be an asset to stay on top of what the fish are doing,” Tharp believes. “I’m just thankful I put a little heat on Wheeler, that last hour had to be nerve-wracking for him.”

Edwin Evers, the 2019 Bass Pro Tour Points Champion, snuck over the Elimination Line toward the end of Period 3 into 19th place after catching a 6-10 largemouth with less than 20 minutes to go. He finished the Qualifying Round in 18th place with 22 pounds, 12 ounces after ending Saturday (day one) with only one, 2-pound catch.

The Top 10 of the Qualifying Round, Group B finished day two as follows:

Daiwa pro Ish Monroe landed today’s Berkley Big Bass weighing in at 7 pounds, 2 ounces. Monroe finished 34th overall and will not advance into the Knockout Round but will favor well this Stage toward his Heavy Hitters qualifying weight. MLF Heavy Hitters Presented by Venmo brings together the 30 anglers with the heaviest “virtual bags” after five Stages of the Bass Pro Tour. Anglers will compete for over $750,000 in prizes including a Berkley Big Bass payout ranging from $25,000 to $100,000 per day. Heavy Hitters takes place on the Kissimmee Chain (Fla.) May 16-20, 2020.

Today’s event concluded the Qualifying Round of the B&W Trailer Hitches Stage One Presented by Power-Pole. Two anglers advanced directly into the Championship Round on Wednesday: Bryan Thrift, winner of Group A and Jacob Wheeler, winner of Group B. The remaining eight spots in the Championship Round will be determined in Tuesday’s Knockout Round, in which the anglers who finished in places 2-20 will compete in a field of 38 for the top eight spots.

The 38 anglers competing in the Knockout Round include:

In addition to the economic impact on a host community, Major League Fishing showcases the region through their award-winning, live and linear programming. Each Stage of the Bass Pro Tour is broadcast live on the Major League Fishing app, MyOutdoorTV (MOTV), and majorleaguefishing.com, totaling more than 325 hours of original programming. Fans can follow the fast-paced nature of the MLF format as it unfolds on the live leaderboard through SCORETRACKER® updates. Highlights from each Stage of the 2020 Bass Pro Tour will air on Discovery beginning in July 2020 and Sportsman Channel in early 2021.