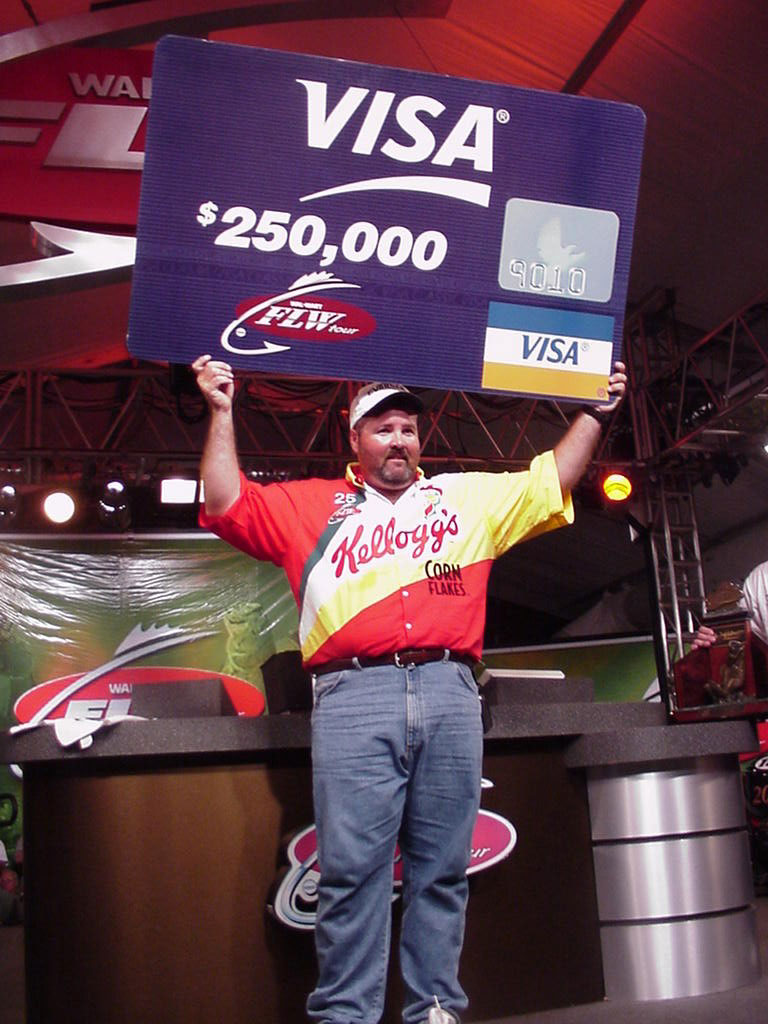 For second-place Biffle, it’s deja vu all over again

SHREVEPORT, La. – Dion Hibdon knew it was going to be close. With only one fish remaining in his livewell, Hibdon saw that less than 2 pounds separated himself from the current leader, Tommy Biffle.

In reality, the FLW Championship was only 1 pound, 12 ounces away.

The crowd grew silent as ESPN host Tommy Sanders called on Hibdon to bring up his last fish. For a brief moment Hibdon paused, looked into the crowd and spied his father, Guido Hibdon.

Guido Hibdon, a fishing legend in his own right, wanted nothing more than his son to walk away with the championship. And Dion Hibdon knew it.

As the crowd grew silent, Hibdon strode to his live well, picked up the last fish and thrust it high into the air.

It was immediately apparent from the size of the fish – even to most angling novices – that Hibdon was not to be denied. Not this time. Biffle knew it. So did the other three finalists – Craig Powers, Larry Nixon and Darrel Robertson.

The FLW Championship, one of the most prestigious bass fishing honors in the country, was going to Dion Hibdon of Stover, Mo.

“I’ll tell you what, it’s just been a lot of fun all week. I’m tickled to death,” said Hibdon, who caught most of his 10-pound, 7-ounce catch on a 3/8-ounce jig. “If my father taught me anything in the world, it’s patience. And today it paid off.”

While proud of his son’s accomplishments, the elder Hibdon dismissed any notion that he had anything to do with Dion’s championship week.

“I think he did a great job. He’s quite a kid,” said Hibdon of his son. “But I’ll tell you what, he accomplished this all by himself. It had nothing to do with me. He’s just an incredible fisherman.”

Meanwhile, Biffle had to settle for second place in an FLW Championship for the third time in four years. However, while it was undoubtedly tough for Biffle to get this close to victory again and not go home with the first-place trophy, he had nothing but good things to say about the experience. After all, how many anglers can say they placed second in a major bass fishing championship even once?

“I had a pretty tough week of fishing, but I can’t complain,” said Biffle, who recorded second-place finishes in the FLW Championship in 1997, 1998 and again in 2000. “These are just hard tournaments to win. I didn’t miss any fish. And I had a really good time. I guess it just wasn’t my turn.”

Biffle, who recorded a final catch of 9 pounds, 10 ounces while walking away with a $25,000 second-place check, took the opportunity to praise the tour as well.

“These Wal-Mart FLW tournaments are just excellent tournaments,” he said. “And I always look forward to coming to them. I just wish one of these times I could win one.”

Powers, who placed third with a catch of 8 pounds, 10 ounces, said he had a fantastic experience as well.

“Look at all the people who are here. It doesn’t get any better than this,” said Powers, a native of Rockwood, Tenn. “You guys have no idea what a compliment it is for me that you guys come here to watch us weigh in some silly fish. We spend a lot of time on the road away from our families, but you guys are like a second family to me. And I really appreciate it.”

Arkansas native Larry Nixon, who led the overall standings after Friday’s competition, said that the major problem was that his primary fishing hole dried up when it counted the most.

“I knew I was in trouble yesterday,” said Nixon, who recorded a final catch of 3 pounds, 11 ounces. “But I just kept hoping and praying something would happen. I just wasn’t able to pull it off.”

Darrel Robertson of Jay, Okla., said he lost much of his confidence heading into the final round as well.

“With the fish I was catching (earlier), I didn’t think I could win the tournament,” said Robertson, who only managed a one-pound catch in the finals. “I probably got beat mentally.”

But after everything was said and done, the day clearly belonged to Hibdon – who brought his wife, Jill, and his three boys, Payden, 8, Lawson, 5, and Connar, 5, on stage for the awards presentation. For the Hibdon family, it truly was a family affair.

However, as the crowd slowly filtered out, one gentleman in the audience could not help but wonder whether that very same kid had grown up right before his eyes.