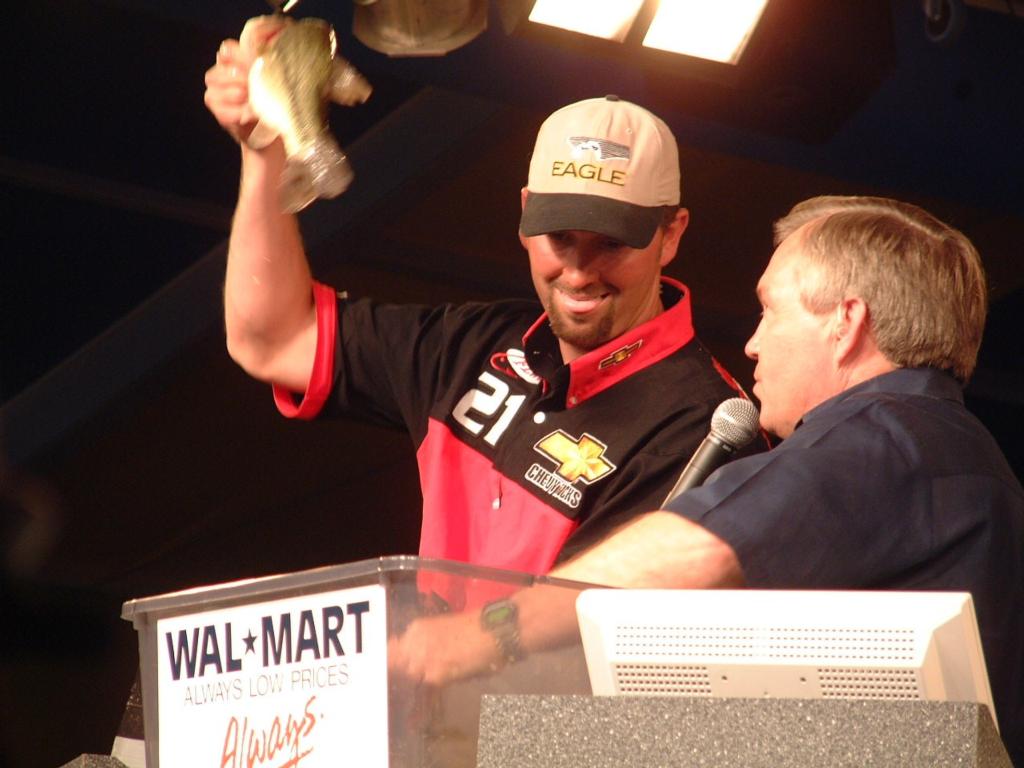 Practice pays off … Pro Gerald Swindle of Warrior, Ala., readily admits his shortcomings as a sight fisherman. But that didn’t stop the former Wal-Mart Open champion from coming into this week’s competition with guns blazing. He weighed in 10 pounds, 7 ounces of bass to take fourth place today and positioned himself for a possible repeat victory at Beaver Lake – which would be a first. But his success has been no accident. Swindle knew this tournament would belong to the sight fishermen, so he prepared accordingly by working to improve on one of his weaknesses. “Starting about two months ago,” he said, “every chance I had I dedicated to becoming better at sight fishing.” There’s a lesson in there somewhere for all of us.

Maybe it worked out for the best … The other final-round pro qualifier with a Wal-Mart Open win already under his belt, Clark Wendlandt of Cedar Park, Texas, had some trouble with one fish today. “I spent about two hours (fishing) for one I didn’t catch. It was about 5 pounds.” Still, he managed to catch five fish weighing 10 pounds, 11 ounces and nestled into third place today. The 5-pounder he left behind will likely still be there tomorrow, and it could be his ticket to a repeat victory and $200,000.

Howell about that … Today’s pro leader, Randy Howell, said he had to scramble a little bit yesterday just to make the top-10 cut. The Trussville, Ala., native ran out of fish in his designated spots and had to make some adjustments on the fly. He went looking for new quarry, which most of the time spells trouble for an angler in the heat of a tournament. Lucky for him, it’s not too hard to find fish in the shallows of Beaver Lake this week. “You just go where the wind isn’t blowing and you’ll find fish that are spawning,” he said.

Is this sanctioned by the NCAA? … It was an all-SEC battle at the climax of today’s Co-Angler Division finals weigh-in. Arkansas native Hoot Gibson had taken the lead with five fish weighing 5 pounds, 15 ounces. The last finalist to weigh-in with a chance to defeat Gibson was Alabama native David Hudson, who had led the Co-Angler Division throughout the tournament. As Hudson stepped up to the scale, FLW host Charlie Evans asked Gibson his thoughts on the tense situation. Gibson threw down the gauntlet. “Arkansas will whoop Alabama,” the 25-year bass-tournament veteran prodded. Hudson laughed and pulled out two fish that collectively weighed 1-12. Then he reached into his sack a third time. However, he came up empty-handed and said, “Arkansas wins.” Understandably, the crowd in the tent here in Rogers went wild.

Back in the penalty box … The co-angler finals saw two more competitors suffer penalties this week. This time, Pat Grimm of West, Texas, and David Gee of Plymouth, Ind., were each penalized a pound for bringing in a bass that didn’t meet the lake length requirements. While neither would have won the tournament had they avoided penalties, it did cost them both several thousand dollars in prize money.

Awards pay rewards … Kudos to pro Keith Williams of Conway, Ark., who won the $1,000 Pepsi/Frito Lay Biggest Bass of the Tournament award. On day one he caught a 4-pound, 13-ounce largemouth, which also earned him $1,250 for the day-one Big Bass award. The calculator says that Williams’ one fish was worth over $467 per pound to him. … Congratulations also to pro finalist Mark Pack of Mineola, Texas, who won the new Conseco “Step Up” award for being the pro who made the biggest jump from his previous personal best finish into the FLW semifinal round. Pack’s previous best FLW finish was 19th. He earned $1,000 in Conseco stock for the award.

15 million: According to the Arkansas Game and Fish Commission, estimated number of bass spawning on the beds this week in Beaver Lake.

“If I’d have been penalized a pound, I would have been in the hole.”
– Ninth-place co-angler Al Little of Greensboro, N.C., who caught around 15 fish today, but they were all just under the length minimum. The one fish he did weigh in just broke the size limit and weighed 1 pound, 1 ounce.

“Boat 21 has fired a shot!”
– An excited pro Gerald Swindle, fishing out of boat number 21, to the TV camera after he caught his first bass of the day.

And here are three nuggets from the very quotable Fred Hill, who placed second in the Co-Angler Division:

“I’ve got a lot of respect for her. I like her a lot.”
– On his wife. He explained that she was the one who convinced him to quit work at age 62 and fish competitively.

“We’re going to get even with Wal-Mart. That’s how much I’ve spent there.”
– On how he feels about his $20,000 in tournament winnings this week.