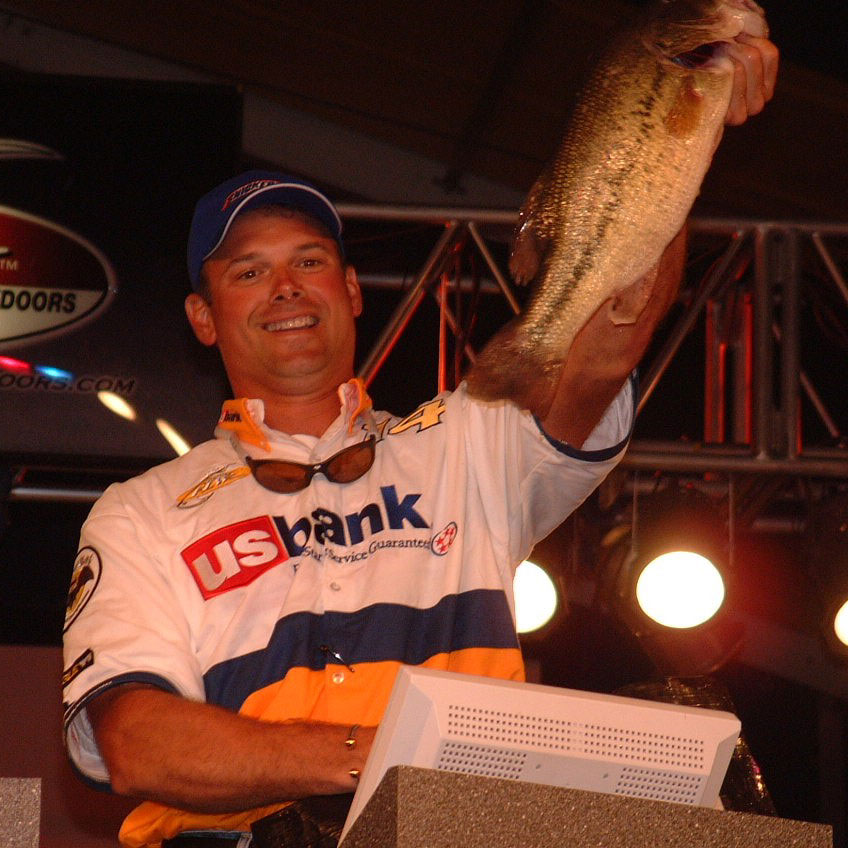 GALLATIN, Tenn. – After turning in consecutive top-20 appearances in the previous two FLW tournaments, John Sappington of Wyandotte, Okla., desperately wanted to crack into the top 10 for the first time all year. As it turned out, he got his wish. Bolstered by a healthy 16-pound, 13-ounce catch, Sappington not only accomplished his immediate goal, but he also managed to grab hold of first place in the process.

“Obviously it feels pretty good,” said Sappington of his performance. “I feel blessed to be where I am. Whether or not I can catch a fish tomorrow, that’s the $1 million question. But I sure had fun out there today.”

After two successful days fishing a Lassic jig on rocky banks, Sappington said that he was forced to change strategies early in the day in order to qualify for the finals.

“I caught two fish with a jig right off the bat today, but then my fish dried up,” said Sappington. “I went for about two hours without catching another fish and I realized that I probably couldn’t win the tournament with the pattern I was on, so I changed to something else.”

Although Sappington wouldn’t be specific about his change in tactics, he said he moved out of the current and began targeting fish in shallow water. It is a change that Sappington hopes will propel him to the first FLW title of his career.

“Nobody is fishing in my area, so I feel pretty good about my chances tomorrow,” said Sappington. “I’m ready to go right now. My highest finish on the tour so far has been a fifth-place finish, so I’m finally ready to go out and win this thing. But if I don’t catch anything tomorrow, I’m blessed to have gotten this far.”

Frank Ippoliti has been nothing but consistently amazing over the first three days of FLW action on Old Hickory Lake. Bolstered by a 13-pound, 4-ounce stringer, Ippoliti managed to grab hold of second place and uphold his streak of five-fish stringers weighing in at least 13 pounds – a feat that no other angler has accomplished this tournament.

“Everything is going as planned. I really feel dialed into the fish right now,” said Ippoliti, who recently moved from Mount Airy, Md., to Fayetteville, Ark., in order to go into the restaurant business. “No matter what happens, this will be the best finish of my career on the FLW Tour.”

Like Sappington, Ippoliti said he was also forced to change up strategies on the fly during today’s competition.

“The first two days the fish were really aggressive, but today they didn’t bite nearly as well,” he said. “I wound up losing my first three fish and decided to change to a smaller jig. Then, when I switched over to a tube bait, it really started to make a difference. That’s when I really started doing pretty well.”

Although Ippoliti changed baits, he said he continued to target largemouth bass on rock and wood cover near bluffs. He also said that he would use the same strategy during tomorrow’s competition.

“I’ll probably wind up doing the same thing tomorrow,” he said. “But the key is going to be who gets the big bites. My guess is that it is going to take 15 pounds to win it all. But if you don’t get that 5-pound fish, it’s going to be tough to win it.”

Basil Bacon of Springfield, Mo., captured third place after landing a 12-pound catch while Mark Pack of Mineola, Texas, finished the day in fourth place with a stringer weighing in at 11 pounds, 11 ounces.

Kevin VanDam, 2001 FLW Angler of the Year, qualified for the finals in fifth place after recording a total catch weighing 11 pounds, 4 ounces.