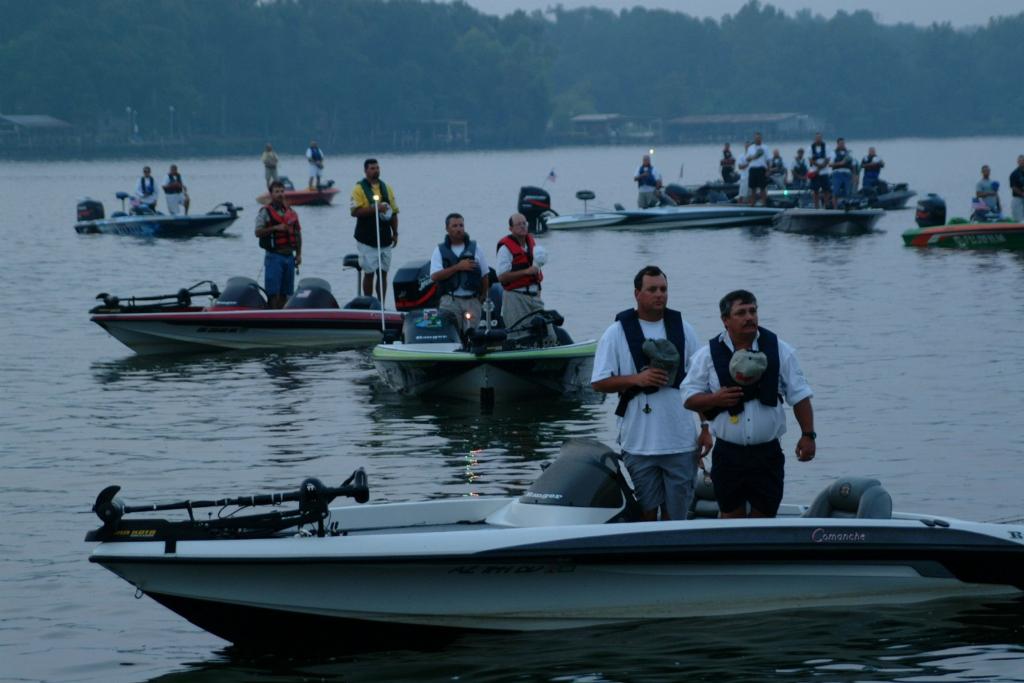 Anglers cover their hearts and stand aboard their boats for the playing of the National Anthem from the shore of Cross Lake in Louisiana. Photo by Patrick Baker.
September 12, 2002 • Patrick Baker • Archives

SHREVEPORT, La. – Anglers raced across the surface of Cross Lake shortly after 7 a.m. in search of open waters rich with fish. Thursday marked the second day of the 2002 Wal-Mart FLW Tour Championship and the final day for anglers to out-fish their bracket mates, a mandatory steppingstone along the path to the semifinals.

A field of 48 pros and 48 co-anglers challenged the lake’s bass population Wednesday and weighed in almost 200 fish despite a slot limit that many had predicted would hamper fishing efforts during the tournament. Though first-day catches paled in comparison to those at the last FLW Tour event, in June, there was no shortage of exciting competition as anglers faced off in head-to-head bracket competition.

Anglers who hauled in less bass than their bracket counterparts Wednesday began day two of the tournament with something to prove. But any pro could still walk away with the $260,000 first prize.

The goal for today is simple: Each pro angler must catch more bass than the man against whom he is paired. The new bracket-style championship competition pits the No. 1 seed coming into the tournament against the No. 48 seed, the No. 2 seed against the No. 47 seed, and so on.

An angler’s cumulative weight for days one and two will determine whether he advances to the semifinal round of competition slated to begin Friday. Anglers within a bracket who caught close to the same weight Wednesday will be on a relatively even playing field today, while those who fell far behind their bracket leaders on day one face an uphill battle on day two.

The champion of the Co-angler Division will be decided based upon cumulative weight throughout the tournament, as co-anglers are not fishing head-to-head.

Cross Lake’s slot limit sets the stage for anglers having to develop interesting fishing strategies. Only four fish 17 inches long or greater can be kept, and no bass between 14 and 17 inches long can be kept. Fish shorter than 14 inches are fair game.

The slot limit contributed to many anglers weighing in fewer bass than a five-fish limit allows. However, fish were certainly caught. Though many of the fish were not quite in the lunker category, some weighed in at heavier than five pounds. Whether anglers gamble on the big bass, play it safe with limits of little ones or use a combination of strategies, the competition is close and the results are unpredictable.

Today’s weigh-in begins at 3:30 p.m. outside the Wal-Mart Supercenter on Pines Road in Shreveport. Friday’s takeoff will commence at 7 a.m. at the American Legion Boat Ramp.