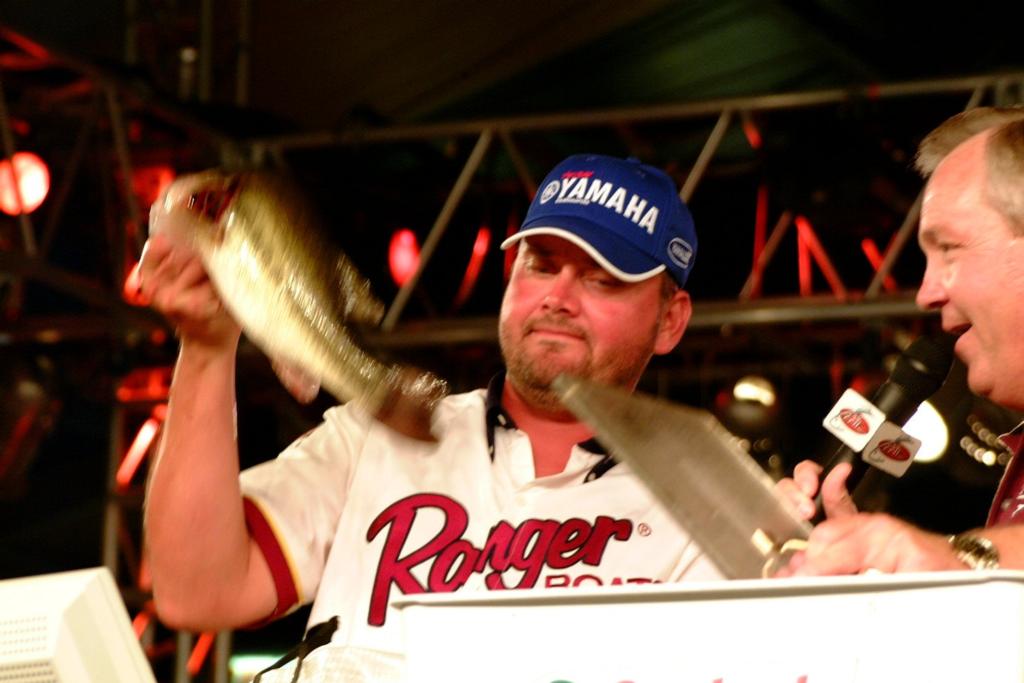 SHREVEPORT, La. – Day-one leader Greg Hackney picked up right where he left off. On the strength of a 6-pound, 1-ounce catch in today’s competition, Hackney compiled a two-day total of 21 pounds, 14 ounces to solidify his overall lead at the 2002 FLW Championship and put himself in prime position to make a run at the $260,000 title.

Hackney, a resident of Oak Ridge, La., said he was more than happy with his performance to date.

However, unlike yesterday’s competition, Hackney had to work overtime just to land three keeper fish.

“I had to work really hard for all of my fish today,” he said. “Because of the slot limit, I had to throw back four pretty nice fish. I did exactly the same thing as yesterday, but I just wasn’t able to catch as many big fish.”

However, despite his struggles, Hackney’s performance afforded him a nice cushion heading into tomorrow’s round of competition as he maintained an overall lead of 3 pounds, 4 ounces over his nearest competitor. But as Hackney is well aware, his overall weight will be meaningless unless he can knock off tomorrow’s powerful rival, Brent Chapman.

“Brent Chapman is going to be tough,” he said. “I’m just going to approach tomorrow as if the first two days didn’t even matter. I have a couple of good spots. And I have a lot of confidence. But I’m going to need some big bites if I want to advance to the finals.”

After turning in a fourth-place performance in yesterday’s competition, Pat Fisher of Stone Mountain, Ga., said he wanted to turn up the pressure on his opponents during today’s action. And that’s exactly what happened. Bolstered by another strong outing, Fisher produced a two-day total of 18 pounds, 10 ounces to grab second place overall heading into tomorrow’s semifinal round of competition.

“I really tried to get my weight up there today and it pretty much worked out,” said Fisher, who has now qualified for the FLW Championship two years in a row despite the fact that he only started fishing the FLW Tour in 2001. “So far, I haven’t really felt any pressure and I think that’s helped me. I had a pretty good day yesterday and I had a limit by 2 p.m. today. It’s been awesome so far.”

Fisher, who is targeting largemouth bass near boat docks with a red and black Zoom tube bait, said that he has landed most of his catch in extremely shallow water.

“I caught two of my keepers today in 4 inches of water,” he said. “And the rest of my fish were caught in about 1 foot of water. They’re very shallow.”

Although Fisher is fishing as well as anyone in the tournament, he said that he had a bad feeling heading into the championship.

“I felt horrible coming in here. I had a terrible practice and I really couldn’t figure anything out,” he said. “But the first day of the tournament, I finally figured out what the fish were doing. Of course with a slot limit in place there is a lot of luck involved. But I’m really feeling confident right now.”

In fact, Fisher is only afraid of one thing during tomorrow’s competition.

“The only thing that worries me is that I’m fishing against Alton Jones,” he said.

Perhaps the biggest hard-luck story of the entire tournament falls to Craig Powers of Rockwood, Tenn. Despite landing 15 pounds of fish over the first two days of the tournament, Powers is going home solely because he was pitted against Alton Jones, who turned in an impressive two-day catch of 16 pounds, 9 ounces. Despite the fact that Powers had more weight than 19 of the 24 anglers who advanced to the next round, Powers couldn’t produce enough weight to knock off Jones.

However, the news was not all that great for Jones either. Due to the quirky nature of the head-to-head bracket format, Jones’ next opponent is Fisher – the angler with the second most weight in the tournament to date.

However, if the Jones/Powers/Fisher matchups were tough, consider Brent Chapman’s bracket. Not only did he have to knock off Wesley Strader, one of the hottest pros on the FLW Tour this year, but now he’s faced with the prospect of battling Hackney, the tournament’s overall leader, in a head-to-head matchup tomorrow. That’s the thanks he gets for turning in the third-largest two-day stringer of the entire tournament.

“Tomorrow is definitely going to be one of the biggest days of the tournament,” he said. “And as luck would have it, I have to fish against Greg tomorrow. And he’s definitely not going to make it easy for me.”

However, after landing a combined weight of 17 pounds, 5 ounces over the first two days, Chapman said he is happy to have made it this far.

“This is one tough lake and one tough slot limit,” said the resident of Shawnee, Kansas. “So I’m tickled to death just to be here. It’s gone well so far, but if I want to advance, I’m definitely going to have to have another great day.”

Although Kevin VanDam turned in a sub-par performance in yesterday’s competition, the world’s top pro overcame a 2-ounce deficit to turn in an impressive two-day total of 14 pounds, 14 ounces to knock off Marty Stone. Aaron Martens also stepped it up a notch during today’s competition, turning in an 11-pound, 12-ounce performance to easily defeat Rob Kilby. Mike Wurm used a dominating 12-pound, 6-ounce catch to turn things around and defeat Randy Blaukat in the process. Going into today’s competition, Wurm had only managed a 2-pound, 6-ounce stringer.

Larry Nixon led the pack in the “close-call” department. Although he failed to record one keeper fish in today’s competition, his opponent, Tom Mann Jr., failed even to show up at the weigh-in podium. Consequently, Nixon advanced with a slim two-day total of 5 pounds, 14 ounces.

2002 FLW Angler of the Year Jay Yelas also had a little help from his opponent. Despite only managing a two-day total of 6 pounds, 11 ounces, Yelas was able to advance when Harmon Davis turned in a two-day performance of 2 pounds, 14 ounces.

With the majority of the field struggling throughout the first two days of competition, day-one leader Danny Strand of Champaign, Ill., made it look easy once again. On the strength of a two-day weight of 13 pounds, 5 ounces, Strand easily maintained his overall lead in the Co-angler Division.

Alex Ormand of Bessemer City took over second place in the overall standings with a two-day catch of 10 pounds, 5 ounces.

Languishing in 23rd place after the first day of competition, Frank Divis, Sr., of Fayetteville, Ark., made one of the biggest moves in the entire tournament when he produced a 7-pound, 4-ounce largemouth bass during today’s weigh-in. Although he only caught one fish during today’s competition, it was enough total weight – 8 pounds, 7 ounces – to grab third place overall in the Co-angler Division.

Friday’s takeoff is scheduled to take place at 7 a.m. at the American Legion, located at 5315 Southlake Shore Drive in Shreveport.