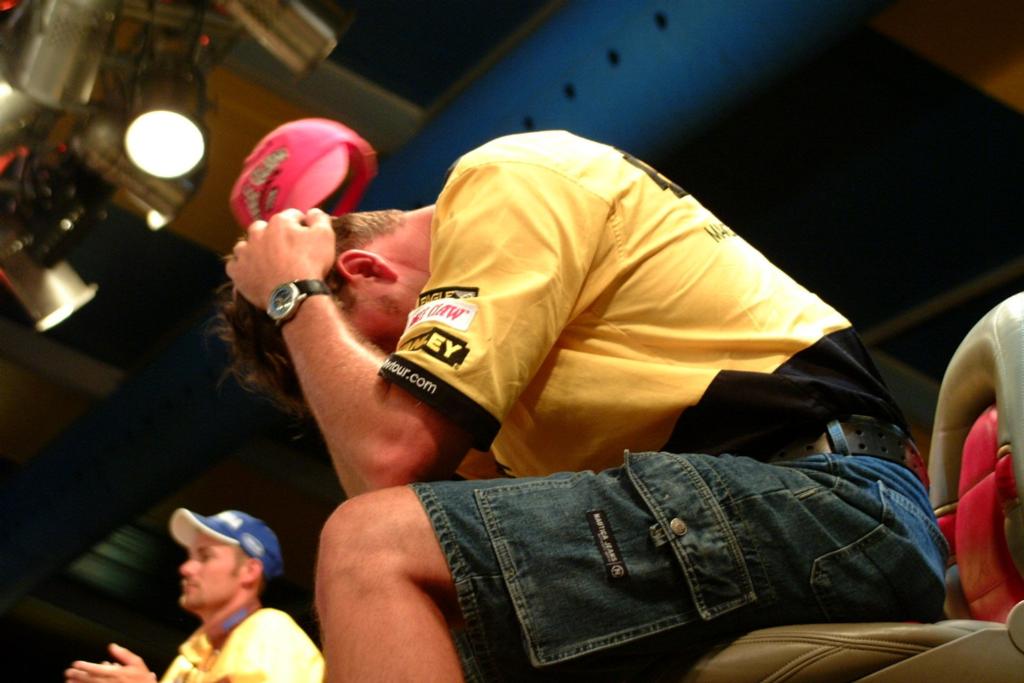 Gerald Swindle felt the pressure while waiting to find out if he had enough weight on the final day of the 2002 Wal-Mart FLW Tour Championship to be victorious. He missed the mark by only five ounces. Photo by Patrick Baker. Angler: Gerald Swindle.
September 14, 2002 • Patrick Baker • Archives

SHREVEPORT, La. – John Sappington and Gerald Swindle proved Saturday that the competitive spirit can conquer adversity – or maybe it’s the thought of a $260,000 paycheck. Either way, these two anglers showed they had a right to be fishing for the title of champion of the 2002 FLW Tour by fishing well ahead of the pack and creating an exciting, down-to-the-wire weigh-in that held the audience transfixed until the very end.

Anglers tried to outmaneuver a slot limit on Cross Lake all week, a factor that usually led to few keepers being caught and low catch weights for most. Adding to the difficulty of turning in top performances was the fact that the smallest lake on the FLW Tour got fished hard many days in row by some of the world’s most successful fishermen.

But somehow Sappington of Wyandotte, Okla., and Swindle of Hayden, Ala., rose to the challenge of strong fishing pressure and a tricky no-catch zone for bass between 14 and 17 inches long. They offered the weigh-in and television audiences more than 9 pounds of bass apiece – some of the healthiest catches of the entire tournament – on the final day. 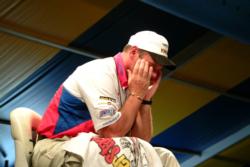 Both anglers were visibly shaken by anxiety as they waited their turns to weigh their fish, neither knowing what the other had lurking in his bag. You could see the tension build as Sappington and Swindle anticipated the final round of their championship matchup.

With sweat pouring down his face, Sappington tried to keep his cool while answering questions from television announcers before the last weigh-in began. He admitted he was extremely nervous.

“Let’s get the show on the road,” he said. “Why don’t you go interview (Swindle), and let’s get the fish up there.”

Though Swindle is said to rarely be short of witticisms and humorous comments, he said the pressure had engulfed his ability to joke about the situation. He added that “there’s nothing funny about two guys” pitted against one another when there’s $260,000 on the line. However, he rallied long enough to elicit quite a bit of laughter from those in attendance while adding commentary to video footage of his fishing day.

Finally the fish were being weighed, one at a time, beginning with the smallest. It seemed as though each angler could match the other within just a few ounces until Sappington pulled out his fourth and final fish, and it was a large one. Swindle shook his head, despite the fact that he had a fifth fish to weigh, as he suspected correctly that it would not make the grade.

In a week that saw pros yielding one- and two-fish catches, including most of the rest of the finalists on Saturday, Sappington and Swindle managed final-day catches of 9 pounds, 12 ounces and 9 pounds, 7 ounces, respectively. It is doubtful that anyone would ask for a more exciting finish to a pro angling season.

With a few months off of the Wal-Mart FLW Tour before the beginning of the 2003 season, some pros will be taking a break from the game. Others will still be fishing in various tournaments this fall or recreationally, but these hard-core professional anglers need to mix it up when they have the time. 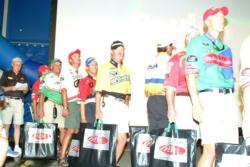 Here is what a few FLW Tour pros will be doing before the end of the year:

Fifth-place finisher Dion Hibdon of Stover, Mo., said his children keep him on his toes year-round, whether he’s on the tournament trail or trying to take a break from the action.

“I don’t really ever have time off,” he said. “You see those three little boys there? I’m always busy.”

Just as Hibdon’s father – the great bass fisherman Guido – passed on his love for bass fishing, Hibdon is doing the same thing. He said he enjoys time away from the FLW Tour in the fall fishing, hunting and getting involved in other activities with his children.

“I’m going to enjoy my time with my boys,” he said.

Tenth-place finisher Kevin Vida of Clare, Mich., is also an avid outdoorsman and a bit of a family man, himself.

Vida said, “I always go hunting, and it’s my fun fishing time – in the fall. And I’ll spend time with my family.”

But Vida also reserves some time to enjoy the other side of the athlete-spectator equation.

Right in line with his fellow fishermen and what appears to be the nature of the angler, third-place Brent Chapman of Shawnee, Kan., said he spends a good portion of the fall in pursuit of animals that don’t live underwater. However, he qualified that by saying he’s also got two more fishing tournaments to finish this year.

“One thing I love to do during the fall is goose hunting and bow hunting,” he said. “… And spending quality time at home, because I’ll be on the road another six months next year.”

Fourth-place finisher Pat Fisher of Stone Mountain, Ga., said he’s got a couple more tournaments to complete this year, but then he’s going to kick back for a bit.

“I’m going to relax,” he said. Not one to buck the system, however, Fisher added that he’s also “going to bow hunt.”

Second-place Swindle made it a clean sweep of those surveyed. Like a good dog or a good FLW angler, he, too, will hunt.

“I hunt every day,” he said. “It’s not so much killing as it is being out there … and being in nature: things like knowing the wind and understanding an animal and its patterns.”

Swindle, who also cites bow hunting as one of his favorite types of hunting, said he’s not thinking about trophies or competing when he’s off the water.

“There’s a tremendous amount of pressure in bass fishing; so, if you’re a competitor, you can drive yourself crazy out there,” he said. “Hunting is my time to get away from it all.”

A dozen pros fishing in today’s final round weighed in a total of 25 bass weighing 42 pounds, 3 ounces, all of which were released alive. Only one five-bass limit was caught.