Beats Yamamoto with his own bait 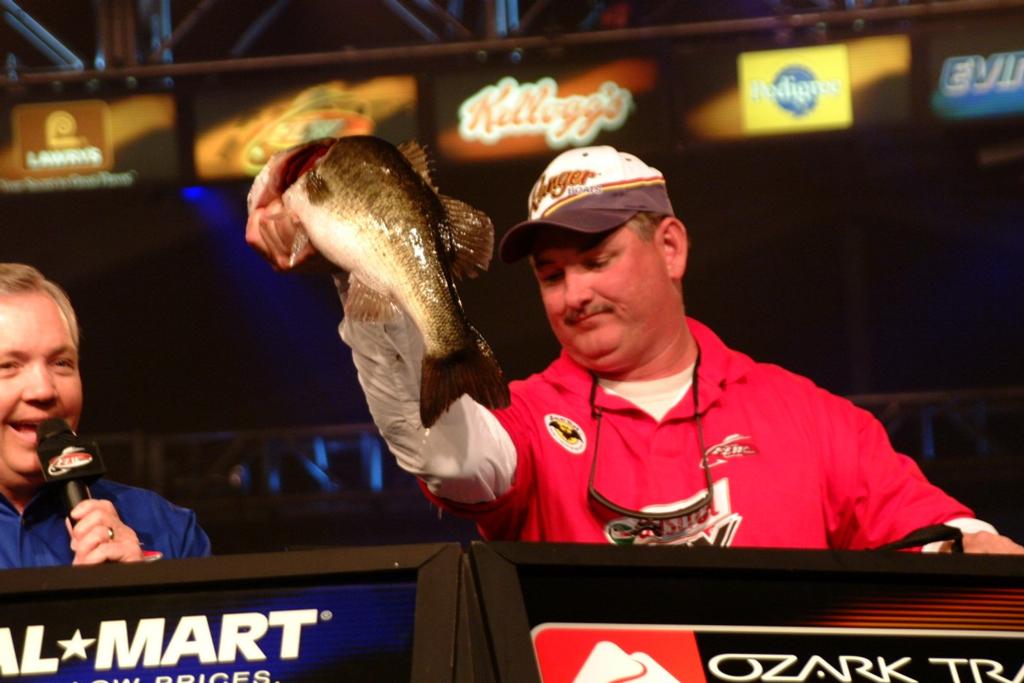 CLEWISTON, Fla. – Robert Kimbrough is a big fan of Derek Yamamoto. All week long Yamamoto’s Kinami Baits have been popular go-to lures in Wal-Mart FLW Tour competition at Lake Okeechobee, probably no more so than for Kimbrough. In Friday’s final round in the Co-angler Division, Kimbrough won the $15,000 title by using a Kinami bait – and he beat Yamamoto in doing so.

In fact, Kimbrough applied the lure-design expertise of the entire Yamamoto family in claiming the win. Thursday in the opening round, Kimbrough caught an enormous 21-pound sack of bass from the back of the boat using mainly a Senko, which is designed by Derek Yamamoto’s father, longtime pro angler and lure designer Gary Yamamoto. Friday he switched to a Kinami Flash, which is designed by Derek Yamamoto. With it, Kimbrough caught three bass weighing 7 pounds, 1 ounce and beat the younger Yamamoto by 9 ounces.

“All of their baits are what caught my fish this week,” said Kimbrough, a 48-year-old store manager from Vero Beach, Fla., competing in his first FLW tournament. “This is awesome, especially since I was 13th on the waiting list to fish this week.”

Kimbrough, who fished with pro Chris McCall Friday, worked his watermelon-colored Kinami Flash around blow-down grass and reeds in the windy conditions in South Bay.

“He was flipping, and I was fishing the outside,” Kimbrough said. “We fished some popular water. There were a lot of beds, but most of them had been plucked clean. It was funny, where I fished today, I fish all the time.”

The key to Kimbrough’s winning three-fish sack was his kicker bass. Due to the conditions, most of the co-angler finalists could only manage to bring 1- or 2-pound fish to the scale – including runner-up Yamamoto, who caught a five-bass limit that weighed just 6-8 – but Kimbrough hooked into a nice 4 1/2-pound bass that made all the difference.

“It was really slow when we started,” Kimbrough said. “I was throwing a spinnerbait. Then I slowed down and went with the Kinami bait. I know you have to fish slow on this lake especially with cold fronts like this.”

Yamamoto, who won $6,000 for second place, also used his own brand of bait, but found lesser success on this day due mainly to the conditions.

“It’s sad when you come to one of the world’s best big-bass lakes and all you catch are little ones,” he said.

Ken Keirsey of Owasso, Okla., finished in third place ($4,000) with a five-bass weight of 5 pounds, 11 ounces. Keirsey is the Co-angler Division champion from the 2003 FLW Championship at the James River.

“It was a tough day,” he said. “The wind really hurt us, and it was pretty cold out there.”

The final day of FLW Tour competition at Lake Okeechobee begins at 7 a.m. EST as the 10 pro finalists take off from Roland Martin’s Marina located at 920 E. Del Monte Ave. in Clewiston. The heaviest two-day weight from Friday and Saturday combined will determine the tournament’s $100,000 winner.