Big day at the office

Round of 24 ensues at FLW Championship; co-angler champion to be crowned 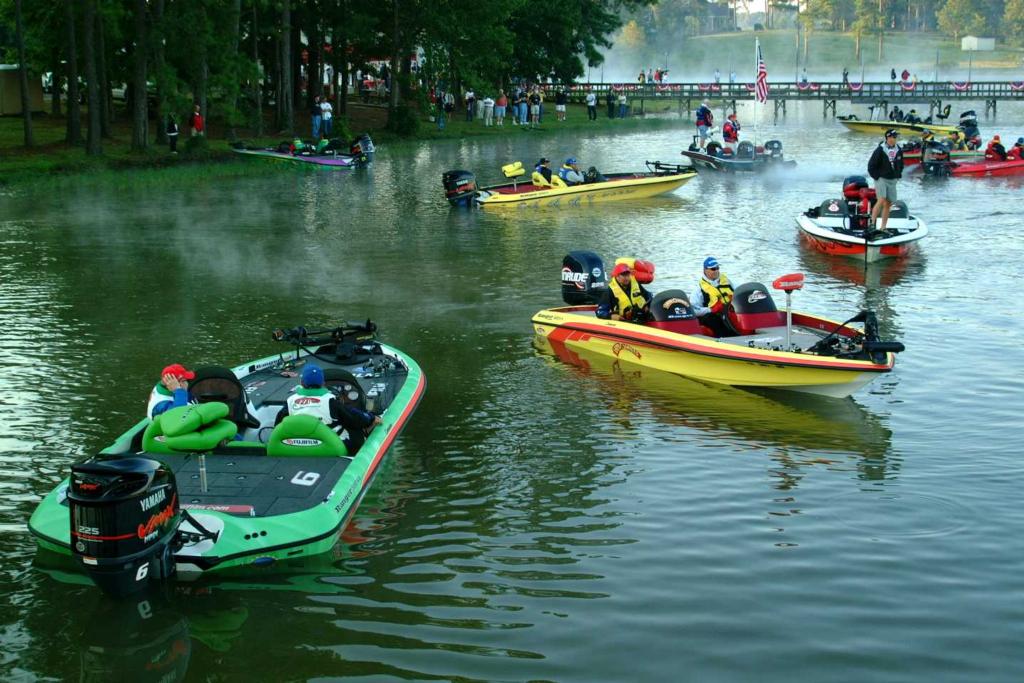 BIRMINGHAM, Ala. – After many close races in the opening round of brackets at the Wal-Mart FLW Tour Championship, the 24 pros who escaped to fish another day at Logan Martin Lake barely had time to breathe as they prepared to take the next step toward collecting professional fishing’s richest reward, $500,000.

“Neither one of us is really setting them on fire,” said pro Brent Chapman of Shawnee, Kan., who is competing against Clark Wendlandt of Cedar Park, Texas, in Friday’s semifinal-round bracket.

Chapman cleared the opening round with a middling weight in the 15-pound range, as did Wendlandt. But Wendlandt made a big comeback to make the cut Thursday with a l0-pound limit and showed that he might have found some better fish.

“It’s just going to come down to which one of us can figure them out tomorrow,” Chapman said. “If I can catch five (bass), then Clark will have to catch five, too.”

And that pretty much sums up most competitors’ approaches to Friday’s one-day shootout. Weights could conceivably rise on day three as some pros who were able to sandbag a little in the opening round now start to target their bigger fish in an effort to make it into day four.

“I didn’t want to show my cards so early,” said Dean Rojas of Grand Saline, Texas, who qualified for today with a relatively low weight – 13 pounds, 12 ounces. “It’s nice to move into the next round. It’s time to bring out the heavy artillery.”

The residual effects of the hurricane systems in the Gulf that brought rain and clouds to the first two days’ action in Alabama seem to have subsided. Clear, sunny skies and calm water was the order of the day as the semifinalists took off from Pell City Lakeside Park Marina at 7 a.m. That could alter some strategies Friday if anglers decide they want to go looking for shallow bass.

“With this weather, I’m not sure where I should start fishing,” pro Kevin Vida of Clare, Mich., said prior to takeoff. “The first day I fished upriver, but yesterday I caught them all right here near the ramp where the water’s clearer. I don’t know if I should catch a limit quick here first or not.”

Vida qualified via one of the harder-fought matchups in the opening round. He caught the fourth-heaviest weight of the opening round – 22 pounds, 13 ounces – and needed almost all of that to slip past Ray Scheide of Russellville, Ark., who caught 20-6. Friday, Vida is fishing against Tracy Adams of Wilkesboro, N.C., who caught 15-10 the first two days.

While everybody’s weight was reset to zero today, many eyes are on the big-gun bracket matchup of Luke Clausen vs. Greg Hackney. Clausen, of Spokane, Wash., led all pros in weight with 26 pounds, 3 ounces in the opening round and Hackney, of Gonzales, La., caught 18-15 and advanced by virtue of a tiebreaker with Todd Ary of Birmingham.

“I won’t feel comfortable unless I catch 18 pounds,” Clausen said. “I mean, I’m fishing against Hackney.”

Another marquee matchup could be Mickey Bruce vs. Shinichi Fukae. Buford, Georgia’s Bruce – with 25 pounds, 10 ounces in the opening round – showed that he is on some serious bass this week. Osaka, Japan’s Fukae showed why he earned this year’s Land O’Lakes Angler of the Year award by rebounding Thursday with a good limit to make the cut.

Also keep your eye on Dave Lefebre of Erie, Pa., vs. Mark Rose of Marion, Ark., who both caught more than 20 pounds the first two days.

“It feels kind of like Old Hickory (Lake) here,” said Lefebre, who won this year’s FLW event at the Nashville-area impoundment. “If we were going by accumulated weight, I’d feel really good about this tournament.”

Co-angler competition to be decided

The top 24 co-anglers are fishing in a one-day shootout Friday to decide the winner of the championship.

So far, Greg Gulledge of Monticello, Ark., has thoroughly dominated the back-of-the-boat division, catching exactly 26 pounds of bass the first two days. It was the second-heaviest overall weight of the event in the opening round – pro or co-angler – and led his closest challenger, T.R. Fuller of Auburn, Ala., by more than 7 pounds.

That means little in Friday’s co-angler finals, however, since everybody’s weight was reset to zero.

Win the first Ranger Z-Series off the line

The outdoor show in conjunction with this week’s championship runs from noon until 9 p.m. Friday at the Birmingham-Jefferson Convention Complex. Fans attending the show can register for a chance to win a drawing for the newly unveiled Ranger Z-Series Comanche powered by Yamaha. The boat to be given away is the first Z-Series off the production line.

Not only that, one lucky fan attending Saturday’s final weigh-in will win a NASCAR Limited Series Ranger 521VX Comanche powered by Evinrude, courtesy of The Birmingham News and Birmingham Post-Herald.

Thanks to some innovative technology, bass-fishing enthusiasts have access to all of the sights and sounds of each day’s weigh-in from the Aug. 11-14 Wal-Mart FLW Tour Championship at Logan Martin Lake. Fans will get up-to-the-second weigh-in results, live streaming video and real-time audio immediately on “FLW Live™” – a new feature on FLWOutdoors.com that brings the live weigh-in format right to your computer screen.

To locate FLW Live, simply go to the FLW Tour home page and click on FLW Live, located on the left-hand navigation bar. The start page will appear. Follow the directions to activate FLW Live.