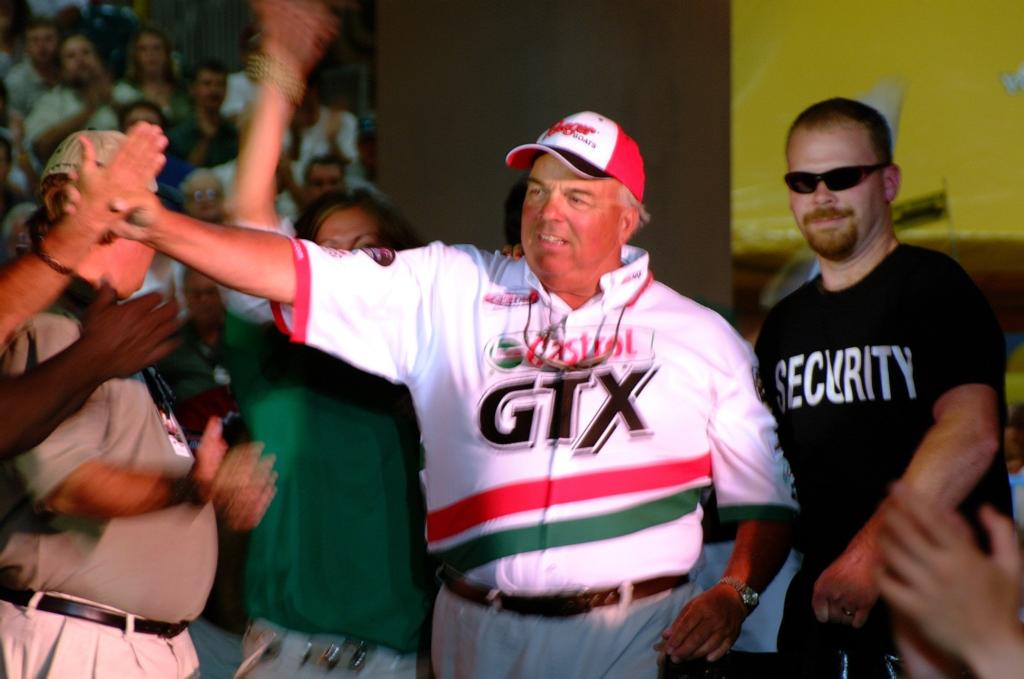 Big-buck bassing … Over the course of the four-day 2004 FLW Championship, several pro anglers expressed their thankfulness for fishing a tournament circuit that leaves a $500,000 pot of gold at the end of the season. Eighth-place pro Charlie Ingram thanked FLW Outdoors Chairman Irwin Jacobs for making that kind of payoff possible as well as the considerable purse money that is awarded throughout the season, which allows many pro anglers to actually make a living doing what they love. Ingram said he asked Jacobs several years ago how he intended to make FLW Outdoors circuits successful. “He said, `I’m going to do it by raising the ante,’ and by God, he did,” Ingram said. “FLW Outdoors” co-host and pro angling legend Hank Parker described before the final weigh-in how it’s hard to believe pros can be fishing for a half-million-dollar first prize. He said all the many wins he had during his career combined, including two Bassmaster Classic wins, wouldn’t equal the first-place payoff in today’s championship.

Deja two … Of all the 12 finalists who battled it out Saturday to take home the FLW Championship trophy, only two were in the same boat last year: John Crews and Jimmy Millsaps. Crews, who has made the finals both times he has fished the FLW Championship, qualified for the 2003 year-ender in only his second year as an FLW Tour pro. Millsaps, a six-year tour pro, has qualified for three FLW championships in his career, two of which he fished in the last two season.

The real heroes … Ranger Boats founder Forrest L. Wood kicked off Saturday’s final weigh-in by addressing the thousands of members of the military serving the United States, both abroad and at home, who were watching the FLW Championship live on the Armed Forces Network. “This weigh-in is for these people here today, but really it’s for all these people around the world,” Wood said, adding that he wanted to let them all know “how much we appreciate what you do for us and our country.” He said he is proud to be able to see how far tournament fishing has come over the past few decades, as evidenced by the 12 talented finalists fishing for the title, but that the real heroes are the men and women who risk their lives to defend America.

Foto finish … Fujifilm’s mascot, Foto, was the winner of the inaugural Sponsor Mascot Tournament at the championship. Foto was able to catch more fish at the Fujifilm trout pond than the likes of Tony the Tiger, Energizer Bunny or Eagle Claw’s Ernie the Eagle, who was the tournament runner-up. For the picturesque win, FLW Outdoors donated $1,000 to the Children’s Miracle Network in Fuji’s name.

This one goes to 11 … Satsuma, Ala., pro Jason Kilpatrick was given a standing ovation by his home crowd and loyal fans, despite placing 11th in the championship finals. After three of four Alabamans fell to foes in the bracket-style championship, Kilpatrick was the last chance the host state had for laying claim to the winner. But the fans still seemed quite proud of their second-year FLW Tour pro, who vowed to win an FLW title in the near future. “I’ve been up here on this (finals) stage three out of the last four times (FLW has hosted tournaments),” Kilpatrick said. “I want to get it done.”

4: Number of fishermen from the West who qualified for the 2004 FLW Tour Championship, including two anglers and two co-anglers. 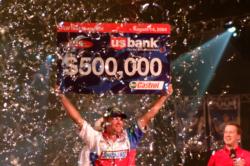 2: Number of fishermen from the West who won championship titles this year: pro Luke Clausen of Spokane, Wash., and co-angler Stephen Tosh Jr. of Waterford, Calif.

“The only thing I see wrong with it is that it’s not hooked up to my Suburban.”

– Parker, recounting what he told Ranger Boats President Randy Hopper about the new Z-Series Comanche model boat after getting a sneak peak.

“I want to say something about this crowd, and Birmingham, and Pell City and Alabama. You rock!”

– Pro Kevin Vida, addressing the capacity crowd at the Birmingham-Jefferson Convention Complex during the final weigh-in.

“You keep saying you’re just proud to be here, but I know you better than that. I know you wanted to win more than anything in the world.”

– Parker, giving Ingram a hard time about his congeniality in the face of defeat in the finals.

– Millsaps, after finally landing a bass that was swimming around with 4 feet of his slacked line after the fish tangled it around a board. When he brought it away from the dock and into his boat, as seen by the weigh-in crowd on a monitor, the piece of wood was still attached.