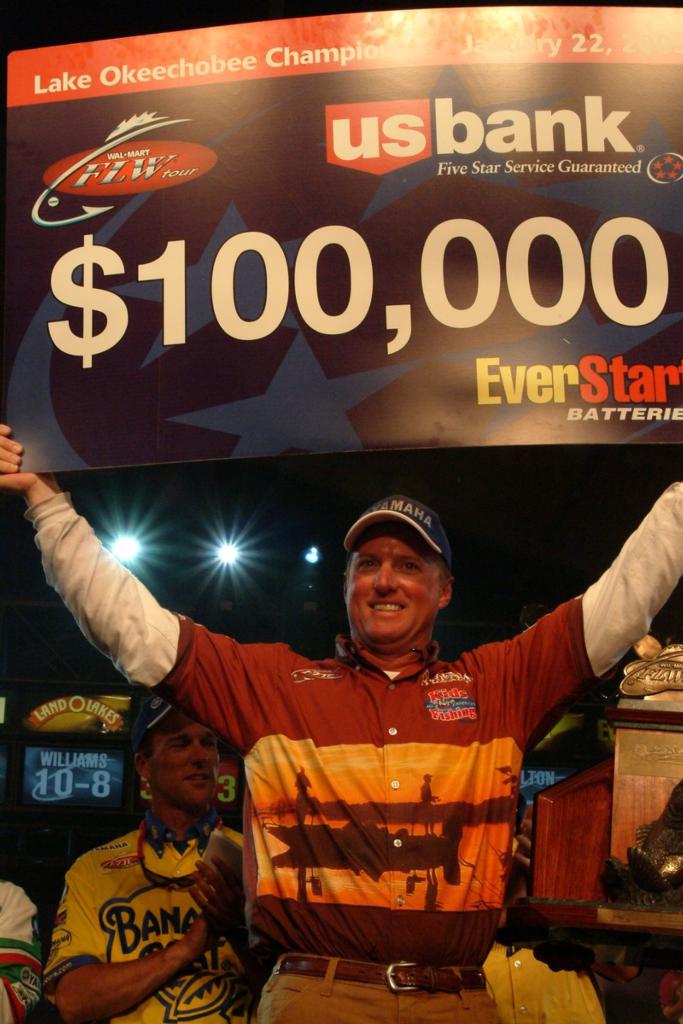 To make matters worse for Jordon, the scheduled 7 a.m. takeoff didn’t even commence until 8:30 a.m. due to a severe fog delay. With only four and a half hours of actual fishing time on the docket, a ton of ground to make up and some of the best anglers in the nation ahead of him in the standings, it seemed that Jordon had every conceivable obstacle standing between him and a championship.

But as everyone knows, no one is ever completely out of a tournament – especially if they are fishing on the Big O.

Skyrocketing up the leaderboard with a stunning catch of 23 pounds in today’s final contest, Jordon shocked the tournament field, outfishing his nearest rival over the final two days by more than 4 pounds. Even more impressive was the fact that he did it all with only four fish in the finals.

Despite the highly stressful affair, Jordon said he wouldn’t have had it any other way.

“That was amazing,” said Jordon in perhaps the understatement of the day. “I had a 30-minute streak today where I caught almost all of my fish. It was the most amazing 30 minutes of my life. It was just one of those deals where everything lined up.”

Although Jordon knew that he had a day that he wouldn’t ever forget, he was doubtful he had enough fish to put him over the top heading back to the boat ramp.

“I felt great coming in, but I didn’t think I had it,” said Jordon, who only managed a four-fish stringer despite his best efforts. “I thought I’d make a pretty good push on the leaders, but I still thought I needed one more fish.

“It’s just such a great accomplishment. I’ve never won on the FLW Tour before. It is extremely exciting. I don’t know what else to say.”

Jordon said part of the reason he won the tournament was that he made a gamble, which ultimately paid big dividends. Instead of going to a spot where he knew he could catch a limit, he went straight for an area he thought had a high concentration of big fish.

“This was a big-fish tournament, and I knew that whoever was going to win was going to have to get the big bites,” he said. “I went to an area and tried to find the thickest (grass mat) cover I could find. Even though I didn’t catch a limit, I knew that I made the right decision. I never second-guessed myself.”

Jordon targeted largemouth bass in the heavily fished “Monkey Box” area – flipping a Lake Fork Tackle Craw Tube in a June bug color, accompanied with 65-pound Spider wire and a 1 3/8-ounce weight. It was a rig and presentation he’ll remember for a long time to come.

“This is one of my favorite lakes, so this win is very special to me,” said Jordon, who won a first-place check totaling $100,000. “I’ll cherish this forever.”

Although day-three leader Steve Kennedy fished one of the best tournaments of his career, his final two-day catch of 26 pounds, 9 ounces came up just little short. However, in the end, Kennedy managed to be gracious in defeat.

“Kelly Jordon is the man. He deserved it,” said Kennedy, who was gunning for his second FLW Tour title. “I would have loved to have won it. I really felt like the short day was playing into my hands. But you need to get those big bites”

Kennedy said that heading back to the boat ramp he had a feeling it was going to come down to the wire.

“Coming in, I was extremely nervous,” the resident of Auburn, Ala., said. “I thought, `I need 20 pounds today to feel comfortable,’ and I didn’t even have 10 pounds. It was a rough day today. I had a lot of bites. But I just couldn’t get that one big bite I needed.”

Kennedy – who was flipping hydrilla mats in the Monkey Box area with a Gambler cricket and 4-inch craw with a 1 ¾-ounce weight – said he had few regrets.

Dean Rojas of Grand Saline, Texas, really thought this was his time. Heading into the finals, Rojas was only 7 ounces off the leaderboard. In addition, he had a great area with lots of big fish and six FLW Tour top-10 finishes under his belt. However, in the end, Rojas ran into a combination of factors that were too difficult to overcome.

“It’s just the way it goes,” he said. “When I got to my area this morning, there were 10 or 12 boats already around my spot. The grass was all torn up. It was a mess. There was a local tournament going on, and there’s really nothing you can do about it. I fished hard but I just couldn’t get the big bites today.”

Rojas said the hardest part was that he believed he finally had the winning formula to nail down his first-ever FLW title.

“Man this hurts,” he said. “I was in the right area; I was doing the right technique; but it just didn’t happen today. But, on the bright side, I’m fishing really well right now. And I’m really looking forward to (FLW Tour stop No. 2) Lake Toho in a few weeks.”

As well he should. At Lake Toho in 2001, Rojas set the record for the largest, single-day stringer ever recorded at 45 pounds, 2 ounces.

For now, however, Rojas was content to settle for a nice consolation prize as well as a hefty check for $25,000.

Although Shinichi Fukae grabbed most of the international headlines during the 2004 FLW Tour, Toshinari Namiki of Tokyo made a huge statement of his own during today’s finals. Using a two-day catch of 19 pounds, 5 ounces, Namiki took home a fourth-place finish, a check for $20,000 and the added respect of some of the nation’s top pros.

“I thought if the water was clearer, I could catch some fish,” Namiki said of his tough final day of fishing. “But it was a great tournament. I’m looking forward to Lake Toho.”

Although Terry Bolton of Paducah, Ky., wanted a tournament title just like every top-10 finalist, he said that he had a pretty good idea today’s finals were going to be tough.

“I kind of knew yesterday that I didn’t have many fish left,” said Bolton, who recorded a two-day catch of 17 pounds, 11 ounces. “I just picked up my spinnerbait today and fished real slowly. I was patient. I stayed at my spot all day. It just didn’t work out.”

For his efforts, Bolton walked away with $18,000 in prize money.

Rounding out the top 10 finalists were the following: