Jordon motors back into FLW lead at Wheeler 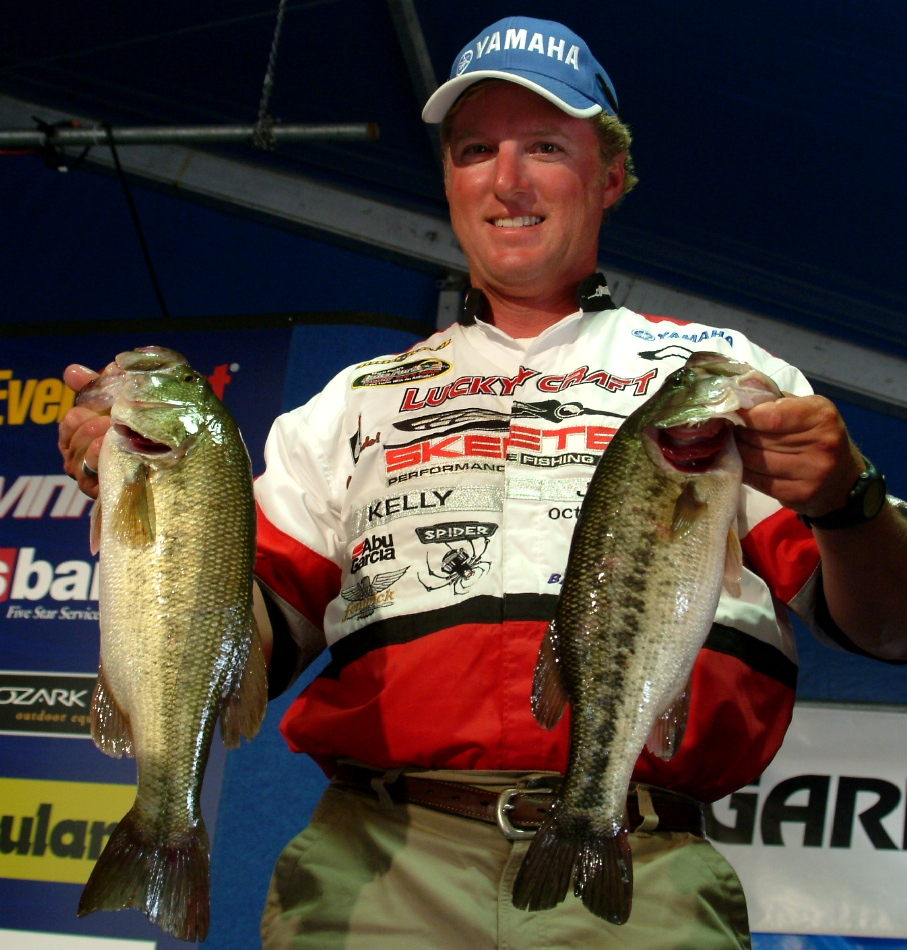 The pro from Mineola, Texas, last seen winning $100,000 at Lake Okeechobee, returned to the top of the Wal-Mart FLW Tour leaderboard Thursday at Wheeler Lake by catching a two-day total weight of 37 pounds, 1 ounce in the opening round.

Jordon started strong Wednesday with a third-place limit weighing 22 pounds, 15 ounces. Thursday he caught another limit, this one weighing 14-2, to take the lead, but he had to work for it.

At takeoff, Jordon ran all the way back up to Guntersville Lake, where most of the leading stringers were caught yesterday. After fishing just a short while, he tried to move to another spot and discovered that his rear motor trim was stuck in the down position.

“It was tucked all the way under the boat. My maximum speed with the motor like that was about 45 mph,” Jordon said. “I was 30 miles up Guntersville, and I only had one fish when it happened.”

Worried about making the two-hour run back to Wheeler for weigh-in, Jordon MacGyvered a trim for his motor. Using a miniature saw blade on his multitool knife, he sawed off a piece of two-by-four that he found on the riverbank and jammed it underneath his motor. With the motor wedged up a little bit, he was able to run at about 60 mph.

After catching one bass off a bed, he then returned to the trusty bream-feeding pattern in offshore shallows that treated him well on day one. Throwing a Lake Fork Baby Creature, he filled out his limit quickly and made a hasty retreat back downriver to ensure he could traverse the lock and return to Decatur on time.

“I didn’t even get to go to my really big ones today. I’ve got some 5-pounders that I’m still saving,” he said. “With my trim deal and everything, I’m tickled to death to have 14 pounds, but I would have liked to have some more practice time. If it doesn’t get too windy tomorrow, I’ll be fine.”

Jordon, as well as a few other pros caught sight-fishing Thursday, were excited by the number of fish they saw still on bed here in the heat of the Alabama May.

“Some fish are coming in to spawn right now,” Jordon said. “They’re not done yet.”

“It was not intentional. I’m kind of like Larry (Nixon, who just missed the cut in 12th place after placing second on day one), I panicked today,” Suggs said. “I was looking to catch 15 pounds, and I lost five fish today. If it didn’t happen today, it’s my fault. I just didn’t perform.”

Ouachita River finalist Mike Hawkes of Sabinal, Texas, returned to the pro finals here by catching the heaviest limit Thursday – 20 pounds, 10 ounces – and leaping into the third position with an opening-round weight of 33-7.

Another Ouachita River pro finalist, Alvin Shaw of State Road, N.C., continued his stellar run of FLW tournaments by making his third finals in a row. (He also top-10ed at Beaver Lake.) Shaw sight-fished his way to solid limits both days of the opening round on Guntersville Lake and posted a two-day weight of 32 pounds, 3 ounces. 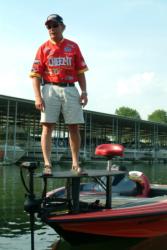 “I was able to see the holes a little bit differently than some of the other guys,” Shaw said. “Koby Kreiger beat me to my spot this morning and picked off all the ones you could see, so I just backed off and went a little deeper.”

Shaw said he fished beds that he couldn’t necessarily see, but that he knew were there. And how he was able to perceive them in deeper water was the result of another MacGyver move that rivaled Jordon’s. Shaw built himself a custom-made sight-fishing deck for his boat – a platform elevated about a foot and a half above the regular front deck – and stood on that to find fish on Guntersville this week.

“You know how you’re always standing on the trolling motor to find fish?” he explained. “With this, I put my trolling motor pedal on it and can even attach my GPS to it.”

Shaw holds the distinction of being the only angler to compete in the FLW Championship every year since 1996. By making the cut here, he joined Bobby Lane as the only angler to make three FLW cuts in a row this season. Unofficially, Rick Clunn, in 2000, was the last pro before them to pull off the feat.

Rounding out the return of the Ouachita River finalists was Toshinari Namiki of Tokyo, Japan, who won the tournament in Louisiana. He placed fifth in the Wheeler opening round with a weight of 32 pounds, 3 ounces.

This is also Namiki’s third FLW finals appearance this season, although not in a row.

Rounding out the top 10 pros on day two at Wheeler Lake:

The limit count was down Thursday, compared to Wednesday. The pros weighed in 55 limits.

Mark Hardin of Canton, Ga., earned the day’s Snickers Big Bass award of $750 in the Pro Division with an 8-pound, 4-ounce largemouth. Pro Ray Scheide of Russellville, Ark., earned the overall Snickers Big Bass award of $1,000 for catching the heaviest bass in either division during the opening round. Scheide caught an 8-pound, 10-ounce largemouth on a 10-inch worm while fishing isolated grass Wednesday.

Jones keeps it up, leads co-anglers

Co-angler Greg Fleming of Holly Lake Ranch, Texas, grabbed the second slot with an opening-round weight of 24 pounds even.

Bill Rogers of Jasper, Texas, placed third for the co-anglers with an opening-round weight of 22 pounds, 10 ounces.

Co-angler Dwight Ameling of Fremont, Ind., who won at Lake Okeechobee earlier this season, placed fourth with a two-day weight of 21 pounds, 15 ounces.

Rounding out the top 10 co-anglers on day two at Wheeler Lake:

Ken Keirsey of Owasso, Okla., claimed the Snickers Big Bass award and $375 in the Co-angler Division with a 6-pound, 14-ounce bass that he caught on a green-pumpkin Senko.

Day three of competition at Wheeler Lake begins as the 10 pros and 10 co-anglers take off from Riverwalk Marina at 7 a.m. Central time Friday for the second half of competition. The co-anglers will wrap up competition Friday while the pros are fishing the first half of a two-day final round.