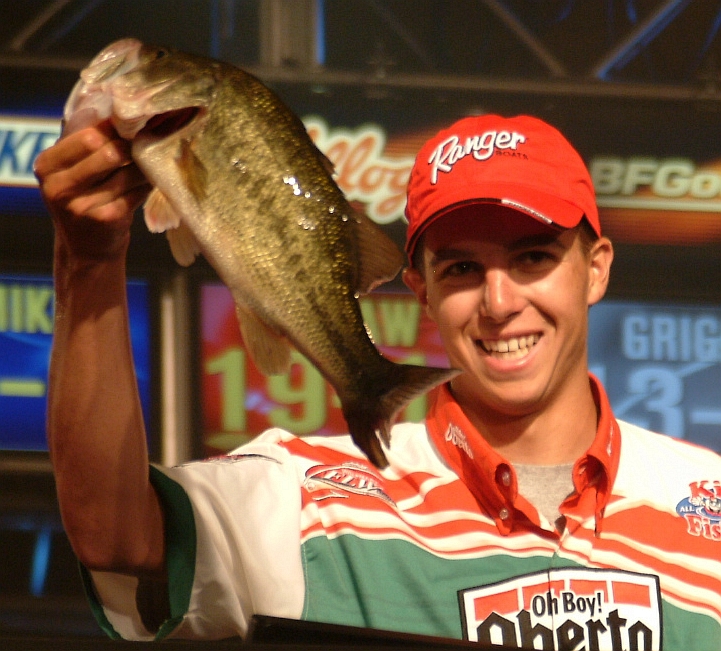 Ice man … When 21-year-old Michael Bennett took the stage at his first FLW Tour top-10 this week, he remained remarkably calm in the midst of all the cameras, lights and attention. Turns out it was just an act. “Today I was a nervous wreck,” he said. “I didn’t know what was going on. I thought Kelly (Jordon) was going to win for sure. I went from really high to really low really quick.” That low didn’t last long, though – even if a win wasn’t in the cards for Bennett today, he’s still thrilled with his runner-up finish. “It was an awesome experience to make the top 10,” he said. “It’s a dream come true.” … What’s remarkable about Bennett is not only can he remain so collected under pressure at such a young age, but that he got himself in such a position at merely 21. He says he got there with a lot of hard work, taking in as much information as he could every time he hit the water.

Oh brother, where art thou? … Michael Bennett’s older brother R.J. almost took the first Bennett brother FLW Tour top-10 – he says he was one fish away, but had he caught that fish and earned a top-10, it would have knocked Michael out of the finals. Michael slipped into the finals in the last qualifying position while R.J. ended the tournament in 24th. “I’m happy for him,” R.J. said. “I would say that I would like for it to be me, but I could not have done as well as he did in the top 10.”

Back to school … Winner Alvin Shaw couldn’t help but get choked up Saturday in the aftermath of his first FLW Tour win. The victory was a long time coming and very well-deserved – Shaw has fished the tour since its inception 10 years ago but has gone winless despite racking up seven top-10s over the years. “It’s really hard to explain,” Shaw said. “I can’t believe how many people were pulling for me. I’m emotional.” … Years ago, Shaw sold his construction business in order to try to make a go in the pro fishing world. “My first goal was to compete against these guys, and that happened the first year,” he said. “I’ve got some milestones, but after making those goals, you definitely want to win.” … The best Shaw had ever finished on the tour before now was fourth, and his win today is especially sweet given the fact that he started 2005 deep in the hole, finishing below 100th in the season’s first two events. He turned it around in dramatic fashion, however, scoring three consecutive top-10s capped off by a victory. He credits the turnaround to a lot of studying done at his North Carolina home. “That got me back going – all the hard work at home and studying,” he said. “There are so many things available on the Internet.”

The gambler … Mike Hawkes may be a Texan, but he does pretty well on Alabama’s Wheeler Lake. Hawkes was the only final-round pro to stick with Wheeler the duration of the tournament while practically everyone else was catching the big ones out of Guntersville.

He finished 10th this week, and in previous FLW Tour events on Wheeler Lake, he has finished 11th and 13th, and he did it by becoming very familiar with the infamous Decatur Flats area. His 11th-place finish there in 2002, his first full season on tour, gave him a lot of confidence, he said. When he returned in 2003, he was already a lock for the championship, which eased a lot of pressure. “I got to know those flats really well,” he said. “I’ve fished 20 days over there the last few years. I never seriously practiced anywhere else. The flats are not on right now, but there’s lots of fish out there. I found a couple places I hadn’t caught any fish on, but I knew there had to be some living there.” It was at that spot that Hawkes slammed a 20-pound bag on day two, moving him 47 spots up the leaderboard and into the final round. The spot never produced those numbers again. “Unfortunately, by the third day, I had milked it for all it was worth,” he said. “I knew it was a big chance, but I stayed out there. That’s the way it goes.” Nevertheless, Hawkes’ top-10 performance this week put him in 13th place in the points standings, meaning he’s a near shoo-in for the year-end championship. As such, he says, “this tournament was worth more than $13,000 to me.”

Still the one … The results are in, and with one tournament left on the schedule, J.T. Kenney remains the points leader, though by a razor-thin margin. Only two points behind him is Anthony Gagliardi, who sits 14 points ahead of No. 3 Greg Hackney. Rounding out the top five Angler of the Year contenders are Toshinari Namiki in fourth and Matt Herren in fifth. Only the top 48 have a chance to fish for $500,000 at the championship, and on the bubble right now is former champion David Walker.

1: Number of bass brought in on the final day by Kelly Jordon, who led days two and three.

3: Approximate number of hours of fishing time left for the anglers fishing Guntersville today after losing about four hours in transit.

5-8: Weight, in pounds and ounces, of Kelly Jordon’s one fish.

67: Number of FLW Tour events fished by Alvin Shaw before his first win.

“I did twice as good as yesterday.” – No. 10 pro Mike Hawkes, looking at the bright side of a two-bass, 5-pound, 11-ounce catch. He caught one bass weighing 2-1 yesterday.

“I think those guys get a kick out of driving really fast with their lights on.” – Mike Hawkes on the police escort that accompanies final-round competitors from the lake to the Wal-Mart weigh-in site.

“We got tested by Mother Nature this afternoon.” – No. 6 pro Scott Suggs on today’s higher winds and heavy rain following three days of intense heat and sunshine.

“It just gets worse every day I go out, doesn’t it?” – No. 9 pro Chip Harrison, whose weights have indeed decreased each day.

“I might catch 30 pounds today.” – What ran through Toshinari Namiki’s mind after he caught his first bass of the day, a solid keeper. Unfortunately, Namiki only caught one more for a total weight of 5-11, good enough for fifth place.

“Just get it over with.” – Alvin Shaw while waiting for Kelly Jordon to weigh in another fish that would have handed Jordon the win. As it turned out, he had none.

“I stayed on my big ones to a fault.” – Kelly Jordon on why he could only produce one keeper today.