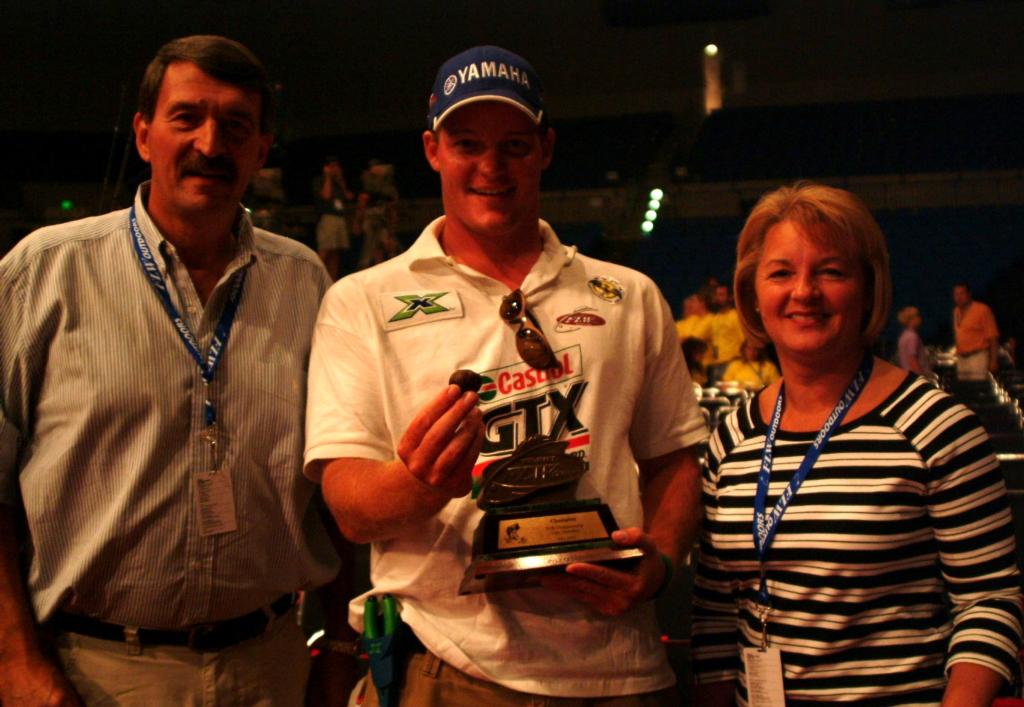 Nutty behavior … For his $25,000 victory as the 2005 co-angler champion, Trevor Jancasz can thank his momma and a lucky chestnut. It seems Neda Jancasz likes to give her son three lucky chestnuts before each tournament – “because the third time’s a charm,” Trevor said. Turns out, today’s blessed nut also brought the young Michigan co-angler luck back in February on Lake Toho. “I kind of ran out,” Jancasz said regarding his chestnut supply. “This is my luckiest one. At Toho, I threw out a Senko, put my hand in my pocket and caught a 10-pounder.” On stage today, Jancasz had his hand back in his pocket, saying, “Mom, I’m rubbing my chestnut right now, and I hope you’re rubbing yours.” That’s right – for every lucky chestnut Jancasz keeps in his pocket, Mom has one to match.

From zero to hero … Robert Karbas Jr. gave new meaning to the phrase after earning a chance to fish on the final day despite catching nary a fish on day three. For the first time since the bracket system was instituted in 2002, both anglers in a bracket did not catch a fish. Karbas’ goose egg defeated Lendell Martin Jr. by virtue of his higher seed – Karbas entered the tournament as the No. 19 seed while Martin was 43rd. “I feel like I’ve been shot at and missed,” Karbas said. “Obviously I’m ecstatic, but at the same time I feel sorry for Lendell. The best thing to say is I’ll do the best I can, and hopefully I’ll make a good representation of myself.” … When the pair approached the weigh-in scale without bags, weighmaster Charlie Evans declared they’d have to race around the convention center for the final-round slot. “I’d wrather wressle,” Martin said, to which Karbas replied, “I don’t want to fall off the stage. I’d just as soon run.”

The General still in command … One of the day’s biggest surprises was Larry Nixon’s win over bracket-mate and No. 1 seed Greg Hackney. The surprise factor was not of Nixon’s ability – he is, after all, a legend – but rather that he had all but eliminated himself before Hackney ever weighed in a fish. “They wouldn’t eat,” he said in premature defeat. “I wouldn’t know what to do if I did make the cut now.” Much to Nixon’s surprise, the Hack Attack could only muster 12 ounces today, allowing Nixon to fish another day. In relief, Nixon said, “I’d already packed my bags! I knew I was history.” As for Hackney, he said he had nothing to complain about and admitted he had trouble getting bites today. “Yesterday I really figured something out, but today they wouldn’t take the bait,” he said. “I got a little overconfident, I guess.” Nixon fans and fellow competitors, take note – the man they call The General thinks he knows a little something about how to catch them tomorrow and take home the $500,000 top prize. “I know where there are four or five fish out there that could win this thing,” he said.

Sayonara … Though there were no huge weights brought in today that nonetheless resulted in a competitor not advancing, No. 39 seed Mickey Bruce did walk off the stage today with the heaviest weight that didn’t win a bracket. Bruce’s 5-pound, 6-ounce day-three stringer fell short of Takahiro Omori’s 7 pounds, 2 ounces. Also going home are local favorite Scott Suggs, who slipped into the semifinal round but lost out to Chip Harrison on day three by more than 3 pounds. Opening-round weight leader Tracy Adams also failed to make it to day four, bringing in just 4 pounds, 2 ounces – a far cry from his opening-round weights – to succumb to No. 29 seed Wesley Strader, who caught 7 pounds. Matt Herren and Danny Correia also performed well in the opening round but slipped on day three to lose to their respective bracket-mates, Dean Rojas and Alton Jones.

Notable advances … Fishing on day four with the lowest semifinal-round weight is No. 3 seed Anthony Gagliardi, who defeated Zell Rowland after the Texas pro came up empty-handed. “I’m going to take to dinner the person who came up with the bracket format,” Gagliardi said. Another noteworthy finalist is Takahiro Omori, the No. 15 seed from Emory, Texas. Omori is the reigning Bassmaster Classic champion, and with a slot in the final round, he now has a chance to add Forrest L. Wood Championship winner to his list of titles.

8-11: Weight, in pounds and ounces, of the heaviest weight brought in today on the pro side, caught by J.T. Kenney.

10: Weight, in ounces, of the smallest fish weighed in at the tournament, brought in on day three by co-angler Bill Rogers.

15: Number of years finalist George Cochran has lived on the shores of Lake Hamilton.

6: Number of top-12 finalists with an FLW Tour win under their belt.

“My wife Nina may want to get in there.” – Legendary founder of Ranger Boats, Forrest L. Wood, on the upcoming $2.5 million Ranger Owners Championship (ROC).

“I never thought I could do it.” – Co-angler Bill Rogers, in mock astonishment over his miniscule 10-ounce bass.

“Surprisingly, I didn’t fall and break my nose on the way to the stage.” – Co-angler Chris Koester, who lost his cap, broke his rod and caught no fish on day three.

“I think I’m going to be a little light, unless this one’s made of tungsten.” – Co-angler Frank Meyer on his one-bass catch today that weighed only 13 ounces.

“I’m sorry I didn’t catch more. I think I need a hug.” – Co-angler Kim Bain to her mother, who responded by opening her arms.

“He had a bit of a home-field disadvantage.” – Chip Harrison on bracket-mate Scott Suggs, an Arkansas pro.

“Her life’s been pretty miserable for the past nine months. I think I’m going to take her home.” – Two-tour pro Zell Rowland on the toll the road life has taken on his wife, Kim.

“You don’t know that.” – Chad Grigsby, in response to Charlie Evans’ remark that he couldn’t win $500,000 with 7 pounds, Grigsby’s approximate day-three weight.