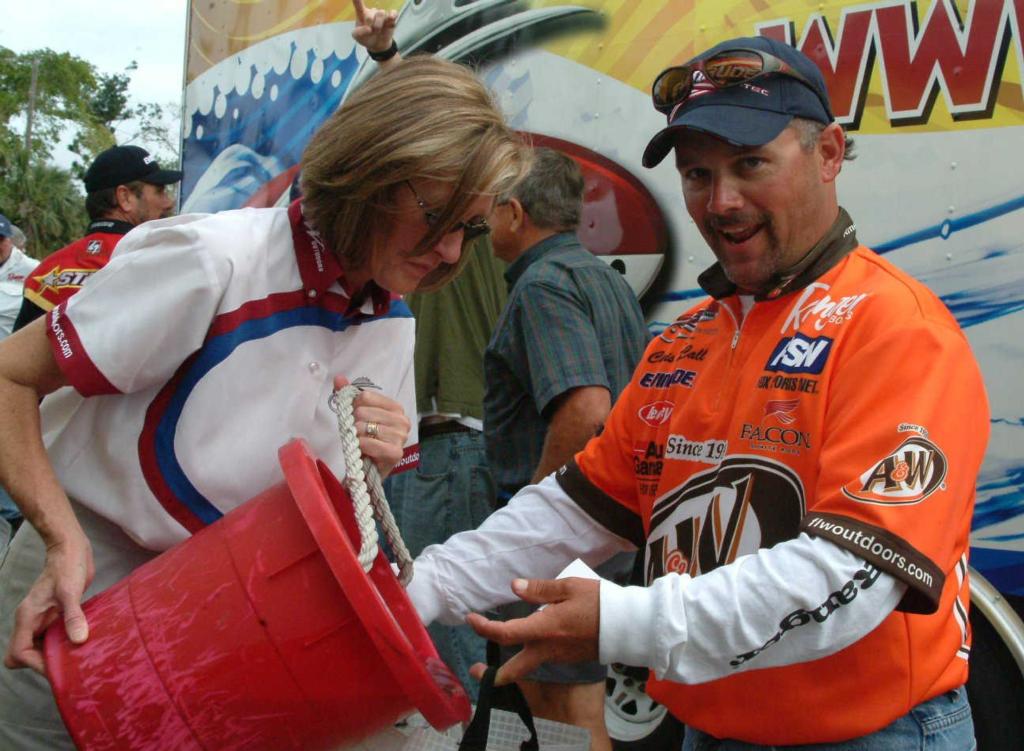 Fly fishing … Texas pro Chris McCall and his day-two partner Robert Horick may have left Lake Okeechobee without a check, but at least they have the best fishing story. The two had trouble catching them despite the fact that the fish were literally throwing themselves at them. “They even tried to surrender to us,” McCall said. “A 14-incher flew into the boat and landed by (Horick’s) feet and just laid there.” The only problem with a volunteer fish is that jurisdiction then becomes a problem. Said McCall, “(Horick) said, `What’s the rule here?’ I said, `It’s my boat.’ He said, `It hit me in the leg.'” Unable to settle the dispute, the two decided just to throw it back.

Mama’s boy … Co-angler Randy Clark is getting his season off to a good start with a final-round position on Lake Okeechobee brought on in part by a sizable bass he enthusiastically brought to the scales. While lots of anglers like to give credit to the folks back home for their success, we’re sort of hoping Clark’s catchphrase of choice won’t catch on. “You know how different fishermen have different calls, like Roland Martin says `Son!'” Clark said. “It’s kind of embarrassing, but when I hooked that fish, I said, `I want my mommy.'” Here’s hoping dear old Mom caught that on FLW Live.

Rookie report … The top three co-anglers of 2005 all made the switch to the pro side in 2006 with varying results. Jason Knapp, last year’s No. 3 co-angler, fared best, finishing the tournament in 18th place and earning an $11,000 check. “You talk about excited – I’m super excited,” Knapp said. Not finishing so high were last year’s Co-angler of the Year Tee Watkins (157th) and runner-up Derek Jones (161st). “I fished just like a rookie today,” Watkins said. Jones too felt the sting: “I’m pretty disappointed.” Cheer up, guys – Okeechobee is tough on lots of folks.

Hope she got a nice gift … Pros Brian and Renee Hensley are celebrating their fourth wedding anniversary today, and they planned to spend it doing what they love best – fishing. The twist is, Brian is here in Okeechobee this week while Renee was scheduled for ice-fishing tournaments on two Michigan lakes. Unfortunately for Renee, things didn’t work out as planned. After all, it’s hard to ice-fish without any ice. “It’s the first year we haven’t had ice this time of year,” Brian said. So with his wife far apart and disappointed on their anniversary, Brian had better be thinking of something really nice to get her, but he won’t be buying anything with tournament winnings. Hensley finished the event 189th with a two-day catch of 6 pounds, 9 ounces.

Changes of fortune … Perhaps most notable about the top 10 finalists on the pro side is how hard some of them had to work to get there. Three of the top 10 made quantum leaps from the bottom of the barrel to the top of the heap, with the biggest jump made by No. 4 pro Mark Hardin, who ended day one in the 102nd position. Chad Grigsby also made the jump, moving from 79th to seventh, and rookie pro Keith Pace, a former co-angler points champ, bounced from 97th to 10th. … On the co-angler side, Clark was by far the biggest gainer, jumping from 131st to ninth to earn his first top-10.

History in the making? … In 1999 and 2000, Gary Klein claimed FLW Tour victories on the Mississippi River at Memphis, Tenn., making him the only angler in FLW Tour history to win a tournament on the same body of water two years in a row. Sure, competitors have won in the same place more than once – Clark Wendlandt at Beaver Lake comes to mind – but only Klein has done it in consecutive years. With a two-day sack of bass weighing 31 pounds, 5 ounces, 2005 Okeechobee champion Kelly Jordon ended this week’s opening round in second place, putting him in contention for another Okeechobee win. Of a potential repeat, Jordon said, “That’s pretty tough. I haven’t done it yet, and I’d love to.” … Judging by Jordon’s performance not only this week but in years past, he certainly shouldn’t be counted out. Last year he milked the Monkey Box for a $100,000 victory and said yesterday he’s using the exact same method this year, only in a different area. Also, Jordon has earned four tournament victories on various tournament trails since 2001, one for each year except for 2003, so he certainly knows how to win.

Making a Mark … Arkansas pro Mark Davis is widely considered one of the greatest bass anglers not only of this era but of all time, and this season he is back on the FLW Tour after a seven-year absence. His first day back was inauspicious, as he managed only 5 pounds, 1 ounce to end day one in 169th place. Today, however, the living legend showed his chops, as he brought in 14 pounds, 12 ounces to ultimately finish the tournament in 37th place – enough to earn a check for $10,250. Turns out, the payday wasn’t exactly what Davis was expecting after his meager opening-day performance. “If I make a check it’ll be a miracle after the stunt I pulled yesterday,” Davis said.

9-2: Weight, in pounds and ounces, of the heaviest bass caught on day two.

3: Number of tagged fish swimming in Lake Okeechobee that are worth $1,000 each, thanks to tour sponsor Tyson.

“I’m Japanese.” – No. 13 co-angler Kenta Kimura, who has a Livingston, Texas, address, after TV host Charlie Evans jokingly said he looked like a long, tall Texan.

“That would be the perfect ending to my trip to Florida.” – Pro Stephen Tosh Jr., who nearly slipped and fell on a mixture of fish sludge and water on stage. Tosh finished the tournament in 183rd place.

“It’s a long way down.” – Day-one leader Mike Hawkes, who caught more than 19 pounds yesterday but caught only one weighing 1 pound, 7 ounces today to fall to 27th place.

“I’ve got to tell you, Roger, you really stunk it up.” – Evans to pro Roger Crafton, who finished sixth at the Stren Series Okeechobee event two weeks ago but could only muster a 154th-place finish at this week’s FLW Tour event.

“I don’t want to wish bad luck, but I hope nobody else caught anything.” – Grigsby, whose 72-spot vault up the leaderboard held up long enough to give him his fourth FLW Tour top-10 in two seasons.

“The moon’s too bright, the sun’s too bright, a butterfly landed on my head, a bird pooped on me … I could go on and on.” – The always-colorful Cody Bird, offering excuses as to why he had a tough time catching Okeechobee bass. He finished the tournament in 120th place.

“I tell them I intimidate people all the time with my size and deep voice.” – Petite co-angler Melinda Mize, sharing her response to people who say she’s too small and girly to be in the National Guard.