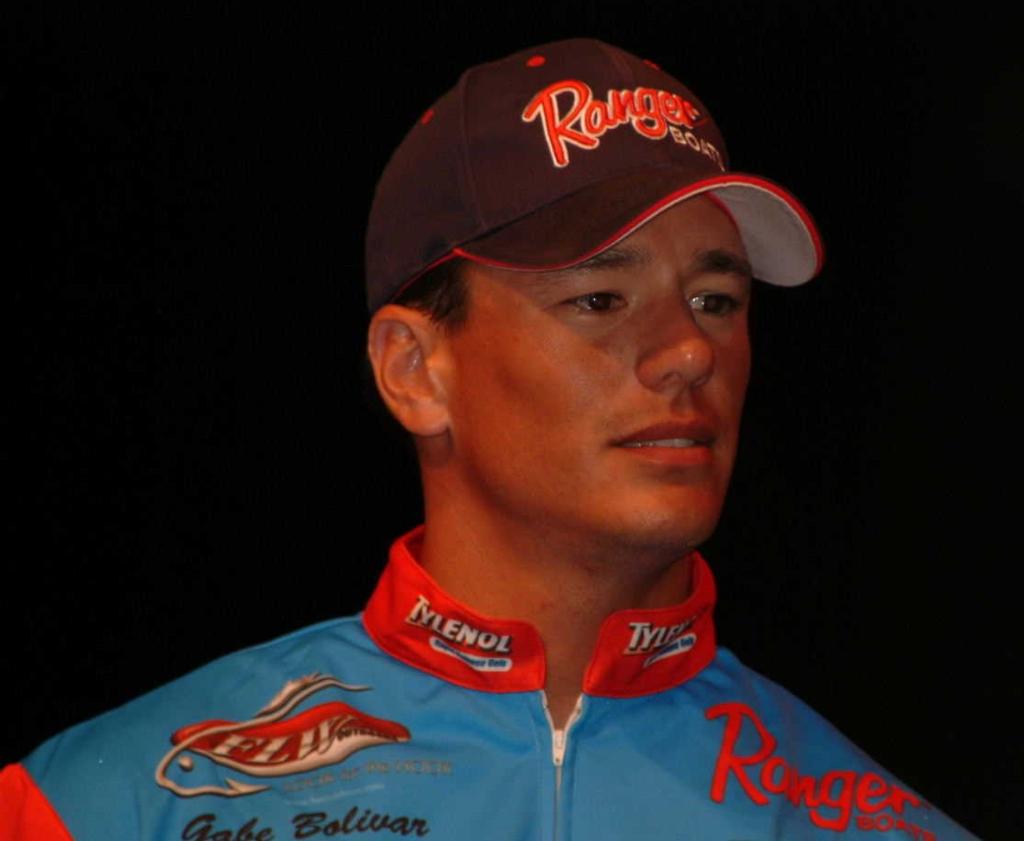 One-ounce wonder … Being eliminated from the Wal-Mart FLW Tour Championship by only an ounce would be a bitter pill for any pro to swallow. But for Rookie of the Year Gabe Bolivar, it’s a particularly jagged little pill because it’s a situation he’s been in before. At last year’s Stren Series Championship, Sam Newby took the title by 1 ounce. Who was the runner-up? Bolivar. Fast forward to today, when Bolivar brought in a limit of bass with no penalties to bring his two-day total to 17 pounds, 4 ounces, only to watch his competition, Gary Yamamoto, end the opening round with 17 pounds, 5 ounces. Yamamoto will live to fish another day, while Bolivar will live to work another Fun Zone. “I’m kind of speechless,” Bolivar said. “I’m happy I’m coming close, but I want to break through so badly. At the Stren, I felt so fortunate to be there, but I’m trying to expect more of myself. When you come up short again, it’s frustrating. It’s a never-ending process, and then to come up 1 ounce short, it deflates you.” … Though the situation is no doubt frustrating, Bolivar has no reason to doubt he has broken through. Not only is he the inaugural Gain Rookie of the Year for 2006, but he made a serious run at the coveted Land O’Lakes Angler of the Year title in his first year in the big show. 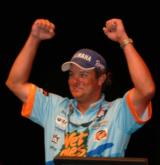 Bosley the baby daddy … No. 19 seed Brennan Bosley proudly walked into tournament registration Tuesday night cradling a tiny baby girl who was only two weeks old. While it was obvious the Bosley family had been blessed with a new addition, what was not so obvious is that for Brennan, it was blessings times two. “It’s been a pretty exciting couple of weeks in the Bosley family,” he said. “On July 18, my daughter was born, and on the same day, I got to adopt my stepdaughter.” Indeed, the paperwork for Bosley to adopt his stepdaughter, Haley, was signed by the judge on her new sister Savannah’s birthday. “I got two girls in one day that are 11 years apart,” Bosley said. … Adding to the excitement for the Bosley bunch was Brennan’s incredible day-two comeback that saw him overcome a 5-pound, 11-ounce deficit to defeat Alvin Shaw by nearly 4 pounds. “It was a fun day – probably my second most fun day since South Carolina,” he said, referring to his top-10 performance in the record-breaking FLW Tour stop on Lake Murray earlier this year.

Close but no cigar … Bolivar isn’t the only one losing by only an ounce, as Alton Jones succumbed to Shinichi Fukae in the other tightest race of the opening round. In a classy defeat, Jones acknowledged Fukae’s incredible talent, declaring, “To almost keep up with him, I know I’ve done the best I could.” However, he might not have done Fukae any favors – the Japanese superstar now will face Luke Clausen, who handily defeated Tom Monsoor in his quest to earn a second championship victory on this very lake. “I love this lake – I love Birmingham,” Clausen said. … Darrel Robertson also just missed, losing to fellow Castrol pro David Dudley by only 2 ounces. “Guess I’ll be working the Fun Zone now,” Robertson joked. “There’s nobody I’d rather beat than Dave, and there’s nobody I’d rather have beat me than Dave.” … Also losing out in a tight race were Jim Moynagh, who fell just 4 ounces behind his bracketmate Kim Stricker, and Terry Bolton, who lost to his good friend Dean Rojas by only 7 ounces.

Smoked them like a cigar … Anthony Gagliardi completed his slaying of Ishama Monroe today, beating the California pro by an almost-unbelievable 19 pounds, 14 ounces. Monroe, who’s certainly no slouch, fell victim to Gagliardi’s momentum, conceding, “I don’t think practice would have helped me.” … In other annihilations, Glenn Browne lost out to Rob Kilby by 13 pounds, saying, “I couldn’t get a shallow bite going.” Several anglers defeated their competition by 6 or 7 pounds or more, with the Andy Morgan-Dan Morehead matchup being the next-closest killer with a 7-pound, 11-ounce margin of victory for Morgan. Morehead took the defeat in stride, saying he’d be heading out to the upcoming Stren Series event on the Mississippi River.

With friends like these … Today’s elimination round made for some pretty strong matchups for tomorrow’s semifinals, particularly the Hot Springs hookup of George Cochran and Rob Kilby. First, Cochran had to get past longtime buddy and distant relative Larry Nixon, only to find himself paired up against another close friend from Arkansas. “Rob and I have been sharing a room together (while traveling to tournaments) for 20 years, so he’s a friend just like Larry,” Cochran lamented. “It’ll be a shootout.” Last year, Cochran won the FLW Tour Championship on his and Kilby’s home turf, Lake Hamilton. “It was my dream come true last year, but I guess another one could top it,” Cochran said. … Nixon had nothing but kind words for his best buddy and bracketmate, but that may be because the ol’ General thinks there’s something in it for him if Cochran can once again go the distance. “Nothing would tickle me more for George to win another one,” Nixon said. “Maybe he’d buy me a cabin.”

Bracket giveth, bracket taketh away … Jones holds the dubious distinction of being the angler eliminated with the heaviest weight, as his two-day catch totaled 22 pounds, 15 ounces, but was just an ounce too short to advance to the finals. On the flip side, Dion Hibdon benefited mightily from the bracket format, as he will fish tomorrow despite catching only 10 pounds, 15 ounces in the opening round.

6: Ounces that kept No. 25 co-angler Sondra Rankin out of the 24-man final round.

13: Number of brackets won by the lower seed.

4: Number of pros who did not bring in a limit on day two.

0: Number of those pros who advanced to the semifinals.

9: Co-angler Matthew Parker’s lead over No. 2 Fred Martin, in ounces.

“I will catch a lot tomorrow, that’s what’s important.” – Clark Wendlandt to his day-three competition, Toshinari Namiki, after Namiki asked Wendlandt how much he caught in the opening round.

“It’s nice to see the old follies can still do it.” – Yamamoto, after unseating rookie Bolivar.

“Twice, two, three, 10 more times, it doesn’t matter.” – Dudley, in response to the question of whether or not he’d like to win a championship title twice.

“Logan Martin never really has been my lake. Lay Lake is my lake.” – Matt Herren, on the idea that he was a pretournament favorite because he lives in nearby Trussville.

“I think his fish coughed up stuff in the livewell bigger than what I weighed in today.” – Hibdon, regarding Bosley’s hefty day-two sack. Hibdon and Bosley will face off tomorrow in the semifinal round.