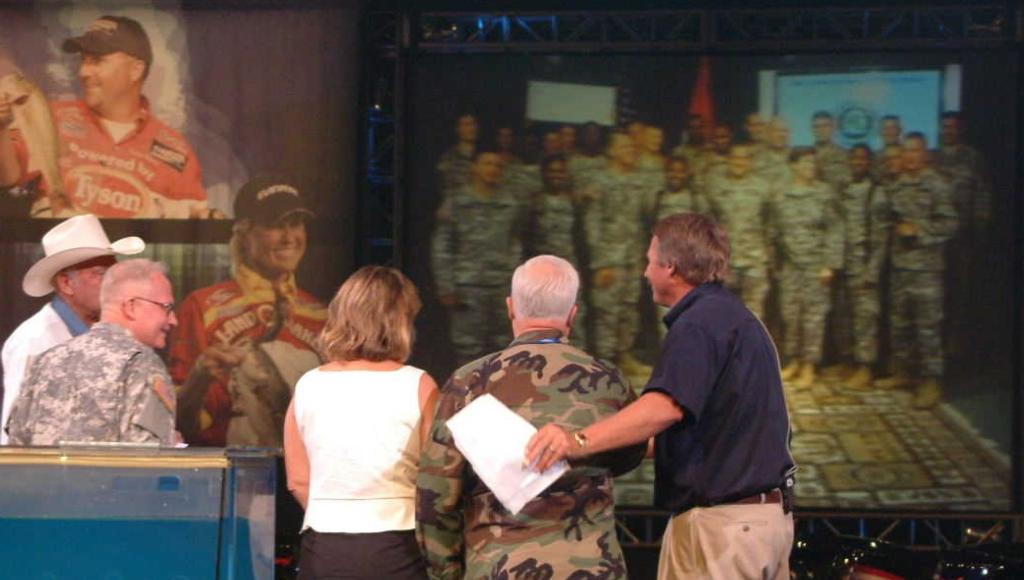 Family reunion … One of the most moving experiences of the FLW Tour season occurred today as members of the National Guard from Alabama who are serving in Iraq joined the weigh-in live via satellite. Making the situation all the more remarkable, though, is that one of the soldiers stationed was able to visit with his parents, who were in attendance at the weigh-in. “That’s my son on the far right,” Lt. Col. Ron Yarbrough told the crowd. “We look a lot alike – we’re both tall, thin and young.” His son, Matt, volleyed a response: “I think a lot of people would disagree.” The joking remarks brought a lighthearted feel to the otherwise bittersweet scenario that brought even Hank Parker to tears. “We want to thank you as a group for all of you out there praying for us and thinking of us,” Matt Yarbrough said. … The unit’s commander said the soldiers came together from 22 units to form one that would serve in Baghdad. 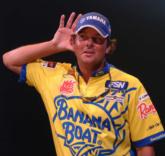 Air and water … After a day of pressure-filled fishing on Logan Martin, the top 12 anglers were escorted back to the Birmingham-Jefferson Convention Complex not by police escort but rather by helicopter, courtesy of the 131st Airborne Division of the Alabama Army National Guard, which served our country in Afghanistan. Today, though, they gave the top 12 anglers the ride of a lifetime. “The door was wide open, and I was back there in the back seat,” said Steve Kennedy. “It was pretty amazing.” Brennan Bosley reiterated Kennedy’s observation that before they knew it, they were hundreds of feet off the ground. “I could tell everybody was nervous, with that wind blowing through there at 40 mph,” Bosley said. “You get the feeling you are moving, and you look down and you’re 300 feet off the ground.” … Bosley said the nervousness quickly gave way to the true purposes of such a helicopter. “We were talking about what it would be like to be in the National Guard, going off to war,” he said. “It makes you think.” 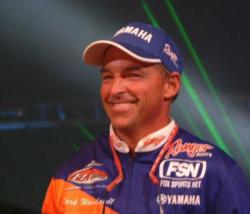 Two’s a crowd … Ten years ago, Clark Wendlandt fished a BASS event on Logan Martin and found a sweet spot that he has used to collect quite a bit of money here in several events. Had it not been for a storm that muddied the place up, Wendlandt said he could have used it to win here two years ago at the FLW Tour Championship. At this year’s event, Wendlandt kept the spot in his back pocket for use at crunch time, as his strategy involved using other spots to secure a place in the finals and then milking the sweet spot for $500,000. The first part of that strategy worked – Wendlandt did make it into the finals. But what he didn’t count on was running into eventual runner-up Ray Scheide at the honeyhole. “I didn’t start there first thing, because my docks were better in the morning,” Wendlandt said. “I went there about 10:30, and nobody was there. I started fishing it, and five minutes later, I heard a boat, and I could tell it was Ray Scheide.” When Wendlandt spotted his competition, he remembered a conversation he’d had with Scheide earlier in the week. “I had told him I’d saved a spot, and I had the impression he was fishing something similar to that,” Wendlandt said. When Scheide got there, though, Wendlandt began to realize just how dried up the spot must be. “I caught one, and he caught one,” Wendlandt said. “He cut me off only because he had been there all week. He had caught all his big fish in a stretch. If Ray hadn’t fished it, I’d have won easily. But I rolled the dice, and unfortunately, somebody was fishing it.” … Wendlandt wound up in third with a day-three catch of 13 pounds, 9 ounces, good for $40,000. 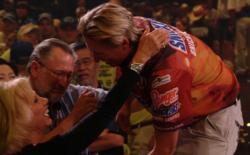 View from the top … Prior to this week’s event, winner Brent Ehrler’s father Butch had never seen his son compete in an FLW Tour event. He picked a mighty fine one to start, as he was on hand to watch his son earn $500,000 for five fish. The younger Ehrler’s triumph in Birmingham is a far cry from his former glory days in the backyard swimming pool, as Butch recalls. “I gave him a fishing pole for Christmas when he was 3 years old,” he said. “He fished all winter in the pool.” That fishing pole would turn out to be the gift that keeps on giving, as it ignited a passion that possesses Brent Ehrler to this day. “If there was water, we knew where he would be,” Butch said. Nowadays, a more accurate statement might be, “if there was a championship, we knew where he would be” – Ehrler’s FLW Tour Championship trophy will join one from the 2004 Stren Series Championship on his mantle.

Fan favorite … The Alabama crowd got rowdy for Auburn native Kennedy during the weigh-ins, but during the day, many of them spent their time crowding around No. 5 finisher Jay Yelas. Yelas is one of competitive fishing’s most recognized and rewarded competitors, and at one point during the day, one observer counted at least 27 boats watching the Texas pro catch fish. For most competitors, having that kind of crowd around them when you’re hunting for half a million would be difficult to take, but not the affable Yelas. “It doesn’t affect me at all,” he said. “I like it because it’s just fan support. People are cheering for you.” Yelas said such attention is to be expected at an event of this magnitude, and he credits the fishing fans in Alabama for being able to respect a competitor’s boundaries. “These Alabama fans, they’re very courteous,” he said. “They know fishing tournaments, and they know the proper etiquette on the water.” … Fans were able to see Yelas boat five keepers that weighed 13 pounds, 2 ounces, worth $30,000. 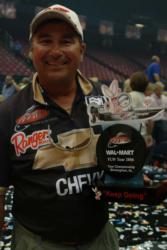 There he goes … No. 12 finisher Kim Stricker was this event’s recipient of the Energizer “Keeps on Going” Award, which is given to the pro who comes the farthest to make it to the final round. In this case, Stricker was the final-round angler with the lowest seed coming into the tournament, as he was ranked 46th out of 48 championship competitors. “Does this go forever?” Stricker joked. “I think it’s fantastic. I’m very fortunate to keep plugging away. I had kind of a funny tournament. With this bracket format, anything can happen. I do keep going, though, that’s for sure.” … Indeed, Stricker was the final-round angler with the lowest weight heading into day four, a benefit of the bracket system, as his day-three competitor Tony Couch also brought in a low weight, enabling Stricker to advance when his weight would not have gotten him far in most of the other brackets. Stricker caught two weighing 1 pound, 12 ounces today to earn $18,000. 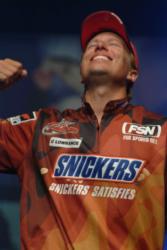 1,000: Value, in dollars, of the gas cards given to the top 12 finalists by BP, one of the newest companies to join FLW Outdoors’ lineup of sponsors.

6: Number of finalists who improved their weight today from day three.

11: Number of top 12 finalists who brought in a five-bass limit on day four.

2: Number of events Ehrler has won in his three-year FLW Outdoors career.

100: Percentage of those events that were championships. 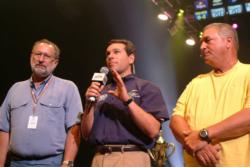 “Hey, Brent, can I have a hundred bucks to go to dinner tonight?” – Butch Ehrler to his son, who could not walk away with less than $18,000 but, of course, ultimately won the half-million.

“I have never missed one of his tournaments since he started, and I will never miss another one as long as I live.” – Anthony Gagliardi’s father – and biggest fan – to TV host Keith Lebowitz.

“I think we need to have all championships from now on.” – Ehrler, who can now claim FLW Tour champion and Stren Series champion on his resume.

“I might have slept 45 minutes last night; I was so excited.” – No. 6 pro Andy Morgan on his half-million-dollar jitters.

“We have surpassed my original dream, which is unusual for me.” – Innovative FLW Outdoors Chairman Irwin Jacobs, on the phenomenal growth of the FLW Tour.