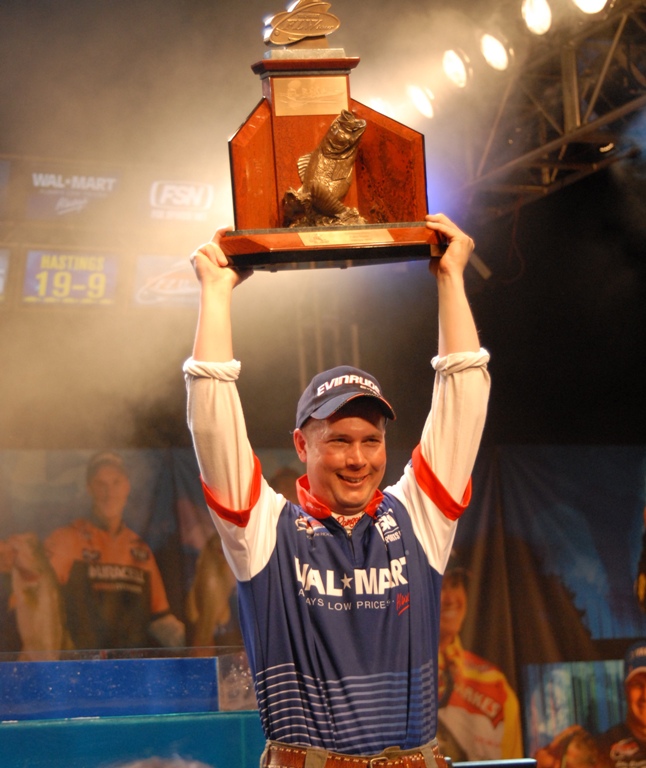 Hastings’ hardships …Today, Aaron Hastings of Middletown, Md., was bathed in the sweet limelight of victory and his pockets were lined with $125,000 as the winner of the Wal-Mart FLW Tour event on Lake Travis. Easy fame and fortune, right? Not so for Hastings. Since 2000, Hastings, who owns a commercial cleaning business in Maryland, has been trying to forge a professional fishing career. In 2003, he qualified for the BASS Tour, saved up every penny and gave it a go. At the very first event of that year, his entire rig – boat and truck – was stolen. With limited insurance on the thousands of dollars in tackle in his boat, the loss completely took the wind out of his professional-fishing sails. He was forced to go back to square one and start all over. He had to sit the rest of the season out and work long hours just to fortify his losses. He returned with a great Stren Series season in 2005, claiming the points race in the Northeast Division and qualifying for the 2006 FLW Tour. But his rookie season on the FLW Tour was unkind to him. He never claimed a check all year, and his highest finish was 79th. From the looks of things this afternoon, Hastings has finally turned the corner. “This tournament is a testament to believing in oneself,” he said. “Given the luck I’ve had over the past five years, I should have quit a long time ago. But deep inside, I know I have what it takes to compete. I kept getting knocked down, but I kept getting back up and making another run at it. You’ve got to have that kind of determination to make it out here.”

of the Lake Travis FLW event was fishing marinas. Large marina docks played a key role in the catches of the top four anglers. Hastings, the winner, noted that his fish were not so much relating to the docks as they were the deep bottom contour breaks under the marinas. “I was making presentations to those marina docks, and while it may have looked like I was keying on the docks themselves, I was actually more interested in specific contour breaks under the docks.” Hastings also believed the water under the docks was less pressured, simply because the vast docks act as barriers to fishing pressure. Fourth-place pro Clark Wendlandt was also using marina docks for part of his catches during the week. “The marinas hold a ton of baitfish under those docks, and it seems that the fish that come from marinas are of a little better quality.” Third-place pro Craig Dowling targeted large dock structures as well. “The bigger docks just have a lot of cables, crossbeams and debris around them,” Dowling said. “Those things only help sweeten the natural bank contours.”

The Beaver Lake connection…Of Wendlandt’s 21 FLW Tour top-10s, five have been collected at the Wal-Mart Open on Beaver Lake in Arkansas, which includes two victories, earning him the moniker Mr.

Beaver Lake. If you have ever wondered why the Kellogg’s pro is so dominant on Beaver, some light was shed on that this week while the FLW Tour visited his home lake. Lake Travis and Beaver Lake could be considered sister lakes, both in their physical features and the way the largemouth bass relate to the two lakes’ similar covers. “I learned how to bass fish here on Travis,” Wendlandt revealed. “And the first time I went to Beaver, I felt like I was fishing Travis. The biggest difference is that Beaver has spotted bass and deep timber, which kind of go hand in hand. If you removed the spotted bass and deep timber from Beaver, what’s left are largemouths that act almost identical to Lake Travis bass in terms of seasonal patterns. And that’s the way I have always treated Beaver: block out the timber and spotted bass and focus just on the largemouth. Especially during the prespawn and spawn, Beaver Lake largemouths relate almost to the exact same types of bank compositions and transitions as in Lake Travis.”

What may have never been … Hastings’ win today may have never happened without the help of National Guard pro Scott Martin. “On day one, after I caught a decent limit, I went to start my motor to head back into weigh-in, and my battery was dead,” Hastings recounted. “Just then Scott Martin pulled in. I told him my predicament, and he quit fishing long enough to give us a tow back in.” When Keith Lebowitz asked Martin if he deserved a portion of Hastings’ money for the favor, Martin said, “No, that’s what FLW is all about: family and sportsmanship. We don’t leave people out on the water. Whether they’ve got no fish or 25 pounds, we’re going to help them out to get back in. And I’d have to believe that anyone else in the tournament would have done the same thing for Aaron.”

40: Depth, in feet, at which pro Jerry Green said he caught most of his fish this week.

6: Pound-test of Hastings’ Berkley Vanish fishing line that landed all his fish today.

10-9: Weight, in pounds and ounces, of the biggest five-bass limit weighed in today by pro Bryan Thrift.

“You’ve got your face on the side of a truck. How cool is that?”

“His daughters were watching; of course I let him win.”

“The colder, the better.”

“It doesn’t get any better than this.”