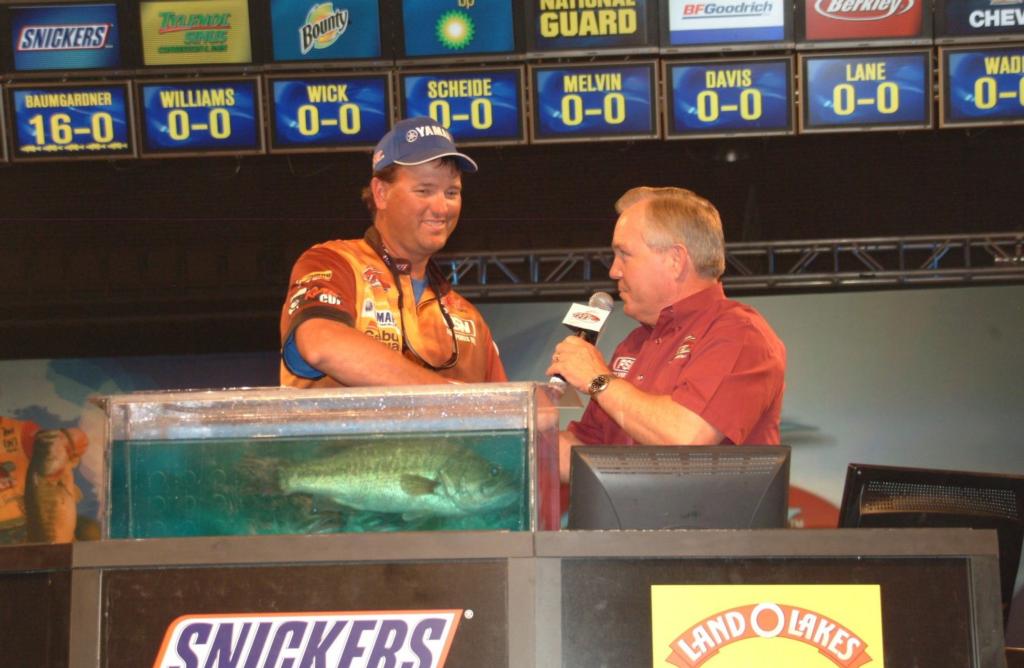 WASHINGTON – The tides weren’t right, the sun shined bright, and the bass were beat up from a week’s worth of pressure. But pro Chris Baumgardner still caught them. In fact, he caught them to the tune of a limit weighing 16 pounds, 7 ounces. Hot on his heels, however, is the FLW Outdoors all-time leading money winner, David Dudley.

Day three of the Wal-Mart FLW Tour qualifier on the Potomac River was considerably tougher. The big 30- and 40-foot cruisers were out in full force. The sun made its first real appearance and basically squelched a hot topwater bite. Still, each of the 10 pros caught five-bass limits, but only two were heavier than 15 pounds.

The biggest sack of the day belonged to Baumgardner, a pro from Gastonia, N.C. The Snickers-sponsored angler caught roughly a dozen bass Saturday. While that sounds like a pretty strong bite, consider that Baumgardner caught over 40 bass on Thursday and roughly 20 yesterday.

He tried his No. 2 spot in the morning, and it was largely unsuccessful. In fact, Baumgardner has basically written it off, saying he is down to one place. He ran to that place, which he considers mostly an afternoon spot, earlier than usual. The action was consistent – there were no real flurries, just a fish here and a fish there. 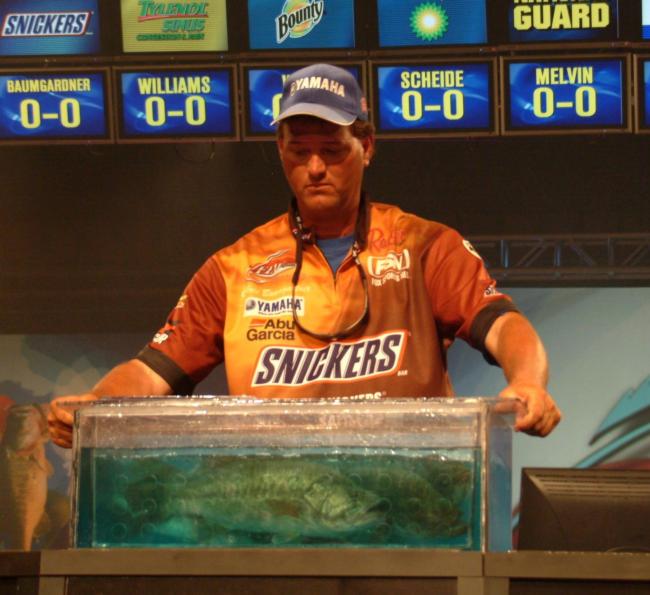 “It’s getting tougher every day,” said the impassive pro leader, who has amassed more than $295,000 in career earnings in FLW Outdoors events.

“I got some good bites today, but who knows what will happen tomorrow?”

In terms of location, Baumgardner is fishing approximately five miles south of Smallwood State Park, which is in Marbury, Md. That means he has to run roughly 40 miles from downtown Washington, D.C., to get to his fish each morning. That also means he has to cut his fishing time short in order to check in on time in the afternoon.

“It’s just a matter of getting in there and getting the right bites. I know I’m in the right place, and I know it has the right size of fish, but it’s getting tougher. I just have to have confidence and stay with it.”

Ever looked closely at Dudley when he’s in contention to win a major tournament? His eyes turn green as he locks in on yet another six-figure payday. Dudley recently surpassed Denny Brauer to claim the fourth spot on bass fishing’s all-time leading money winners’ list with more than $2.3 million.

What Dudley sees at this event is $125,000, but as usual, he still has time for outlandish quotes. 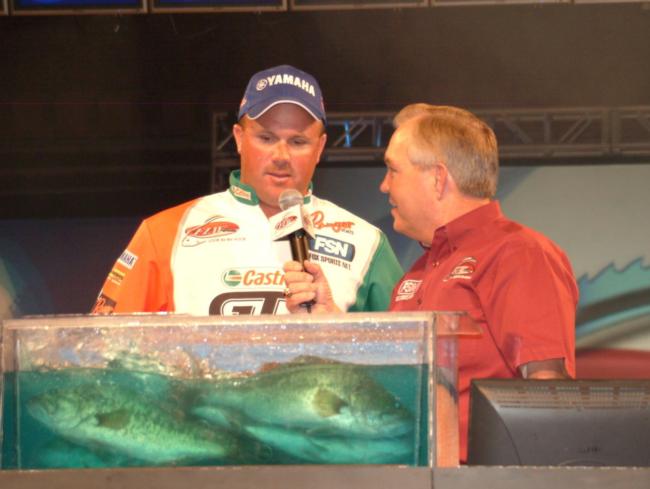 “Do I feel good about tomorrow?” Dudley asked rhetorically. “Yes. I caught a lot of fish today. But you’ll never hear me say, `I’m going to win or I’m going to go out and catch a big bag.’ You know how people do. But not me. Negatory, Big Cat. I’m never going to say that. Never. You don’t even know if you’re going to breathe 30 seconds from now.”

What we do know is that the Castrol pro caught five fish Saturday weighing 15 pounds, 7 ounces to advance to the final day of competition as the No. 2 seed. He concentrated on a stretch of water that ranged four to five miles on either side of Smallwood State Park. Dudley said he has been changing his techniques as well as his locations all three days.

“Every day I’ve been fishing somewhere different. I’ve fished some wood, some weedbeds. I’m just doing whatever feels right. This morning I just had a feeling to go to the grass.”

There, he flipped a Zoom Baby Brush Hog. He also used Senkos extensively. In fact, Dudley was seen after weigh-in barking commands at another angler (who was already eliminated from the event) to help him locate a certain type of Senko.

After day three, it looks like a two-man race between Baumgardner and Dudley. Behind those two anglers, the weights drop off considerably. In third place is Spiderwire pro Bobby Lane with 12 pounds, 15 ounces. Ken Wick trails Lane by 2 ounces with 12-13, and perennial Potomac stalwart Jerry Williams is fifth with 11-15.

Lane continues to fish in the Mattawoman Creek with a Pop-R and a Berkley Chigger Craw.

“I caught five or six limits today, but the fish got skinnier,” said the Lakeland, Fla., native. “I’m going to try to win this thing right on that same patch of grass I’ve been pounding the last two days.”

Wick is making his first top-10 appearance on the FLW Tour. Tomorrow he plans to burn a buzzbait in the morning because his jig pattern doesn’t start producing until the afternoon.

“Four pounds is nothing on the Potomac River,” said the Star, Idaho, pro. “That’s one bite.”

Conway, Ark., pro Williams actually got the worst of it in his boat on day three. His partner, Bob Blosser, won the Co-angler Division with a limit weighing 13-5. Williams’ weighed 11-15. Blosser was slowly swimming a jig, and he proved to Williams that he was fishing too fast.

Rounding out the top 10 pros heading into Sunday’s final-round action at the Potomac River:

Day four begins as the final-round field of 10 boats takes off from Anacostia Park in Washington, D.C., at 6:30 a.m. Eastern time Sunday. Saturday’s weights carry over to Sunday, and the $125,000 Pro Division winner will be determined by two-day combined weight.