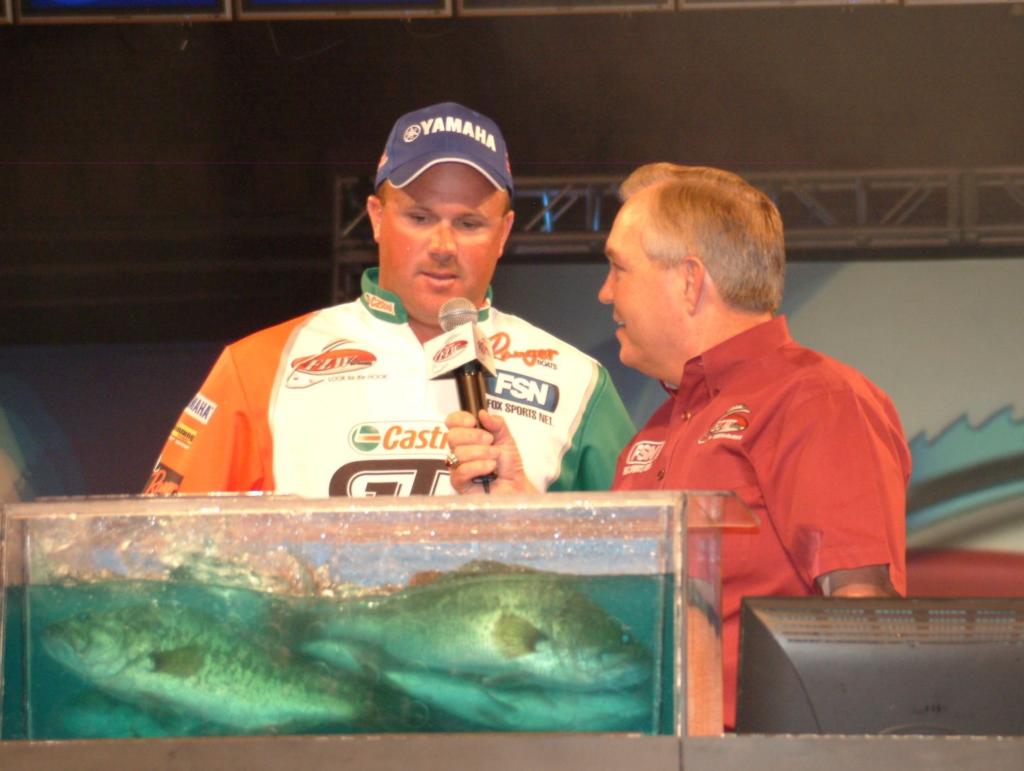 So money … By making the cut this week, David Dudley moved up into fourth place on the all-time money-winners list in professional bass fishing, surpassing legendary Denny Brauer. Coming into the event, he’d already collected $2,023,685 in FLW Outdoors money – most of it coming from the $500,000 FLW Tour Championship he won in 2003 and the $700,000 Ranger M1 in 2002 – and he’s guaranteed at least another $15,000 by making the cut this week. More likely, though, he’ll walk away from the Potomac River with a check in the tens of thousands, if not the whole $125,000 winner’s enchilada. As he did earlier this year in his $125,000 Lake Okeechobee Wal-Mart FLW Series Eastern victory, Dudley put a hurting on the competition when it counted today: in the finals. How does he do it? Bottom line: adaptability. “I just fish whatever feels right. This morning, I felt like going to the grass, so I went with it and just stayed with it,” he said. “Every day has fished somewhat different here. I only spent 30 minutes at the place I fished yesterday (and caught 20 1/2 pounds). With these tidal rivers, you have to move around a lot.” 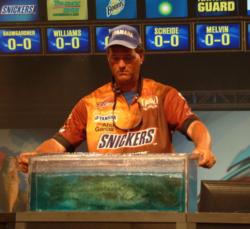 Go ahead, grab one … Dudley’s main competition, though, is Chris Baumgardner, who’s ahead of him by a pound and is no stranger to catching fish in northern lakes lake the Potomac River and Lake Champlain. Baumgardner has good timing too. He’s sponsored by Snickers, which is the presenting sponsor of this event. On Friday, Baumgardner caught the Snickers Big Bass award with a 7-pound, 6-ounce largemouth, which also stands as the heaviest fish of the tournament yet. Should he go on to win this thing, he’d clear the trifecta: day-two big bass, biggest bass of the week and victory – all awards sponsored by Snickers, at least this month. “I’d really like to do it for Snickers,” he said.

The tides, they are a-changin’ … The Potomac really was a different fishery Saturday than it was for the anglers the first two days. First, as usual when the field is trimmed to 10 boats, there was a lot less traffic. Second, the weather changed, with the sun making its first real appearance and the wind dying down. Third, the anglers had to manage their time differently: The check-in point was in Washington, D.C., which shortened their day of fishing, and it affected how they approached fishing the tides. Low tide was preferable, but it has come later and later each day in the afternoon, and that was reflected in slightly lower overall weights by the pros Saturday. Fifth and maybe most importantly, the anglers had to deal with a highly unusual shift in the minimum-length regulations in the middle of a tournament. The first two days the bass minimum on the Potomac was 15 inches, but due to a quirk in the state law that happened to fall right in mid-tournament, that minimum actually shrunk to 12 inches Saturday, June 16. So it was actually a change in their favor, but a change, nevertheless. 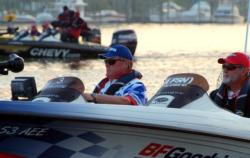 Everybody now: D’oh! … Thanks to the rule change, a couple of co-anglers ended up throwing back keepers Saturday, not the least of which was eventual winner Bob Blosser. Blosser’s blunder cost him an estimated 6 ounces and didn’t hurt him. There’s little excuse for James Dudley – David’s dad – doing the same thing, however. Dudley’s a veteran Potomac River rat and weighed in just three fish. “I had just gotten done telling my son not to throw back the little ones that morning (because of today’s rule change), and then I caught my first fish, put him on the board and he was 14 ¾ inches, so I threw him back,” James said. “After my pro partner, Mark Davis, caught one and threw it out, I just suddenly remembered and told him: `We just threw out two keepers.'”

“Let’s take a look at some video of you on the Potomac. … Oh, I guess we don’t have any video of you. We chucked it out because we didn’t think we had a keeper.”

“I just need a lake full of bass to catch them, I guess.”

– Chris Baumgardner, a North Carolina pro whose career resume includes two top-10s at the Potomac River – this year and last year’s Stren Series runner-up finish – as well as top-10 finishes at Lake Champlain (FLW Tour, 2004) and the Mississippi River at Welch, Minn. (Stren, 2004). Has also has a 2006 Stren top-10 from Santee Cooper lakes in 2006.

13: Number of top-10 final-round finishes accumulated by veteran co-angler David Hudson on the FLW Tour. He has never won one.