Hudson hauls in 11-9 for co-angler lead

Jasper, Ala., fisherman catches one of only four limits 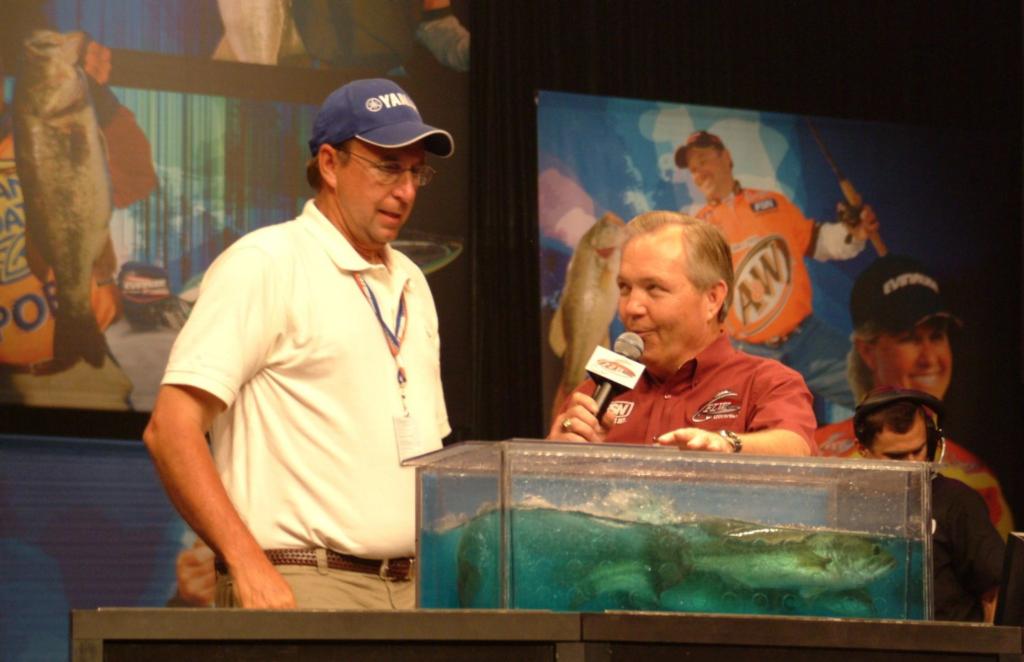 HOT SPRINGS, Ark. – It didn’t take all that much, but it’s a lead all the same for veteran co-angler David Hudson. Fishing with local pro Scott Suggs, Hudson caught a five-bass limit weighing 11 pounds, 9 ounces to lead day one of the 2007 Forrest Wood Cup.

Lake Ouachita was kind to the leader, but stingy to most anglers fishing from the back of the boat. In fact, only four co-anglers caught a five-bass limit on opening day.

“Scott is around the fish; there’s no question about that,” said Hudson, who lives near Lewis Smith Lake, a lake that fishes very similarly to Ouachita. “It seemed like everywhere we stopped, we got bit.”

Suggs’ strategy was to run and gun all over the lake. Hudson said they fished roughly 25 different spots throughout the day, most in water 20 to 25 feet deep. The Jasper, Ala., co-angler caught his bass four different ways. He caught two on a drop-shot, one on a grub and three on a 10-inch worm.

“I usually like to use a finesse worm. But I practiced all week with Mark Davis, and he showed me how to do some other things. He’s probably the best coach in the world.” 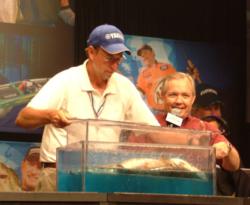 “I’ve been fishing with Mark since 1993. You just can’t beat the knowledge that he’s got.”

In his career, Hudson has 14 tour-level top-10 finishes. He also won the Co-angler of the Year award in 2000. He has not, however, recorded a tour-level victory.

“I’ve finished everywhere from second on down. For whatever reason, I just can’t close the deal. It’s my dream to do it right here.”

Hudson likely needs only two keepers tomorrow to safely position himself in the final round.

Bolstered by a five-fish sack weighing 9 pounds, 11 ounces, Dino Caporuscio of Coto De Caza, Calif., grabbed second place overall in the Co-angler Division. While Hudson was getting bit throughout the day, Caporuscio was just happy to get five bites. He described the fishing as extremely tough and said many fish were biting his baits short. 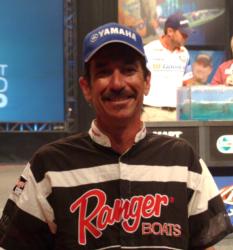 “The fishing was just a struggle, but it was a really enjoyable day,” he said. “I was paired up with Stacey King, and the last time I saw Stacey was back in 1995. He remembered me right away, so that was pretty cool. With a guy like Stacey, there’s no pressure at all.”

Caporuscio, who has qualified for the year-end championship each of the past three seasons, used a silver spoon and a finesse worm to catch his Lake Ouachita largemouths.

“We caught some shallow and some deep. I made a lot of casts, and that was the key. If you’re not feeling the grass, you’re not in the right place.” 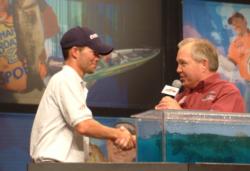 Kevin Koone of Greenbrier, Ark., finished the day in third place after landing an 8-pound, 9-ounce stringer. Fishing with pro Matt Herren, Koone caught only three fish, but they were quality keepers. Herren caught a limit and culled twice.

“I want to stick around for Saturday, so hopefully I can get two or three fish tomorrow,” said Koone. 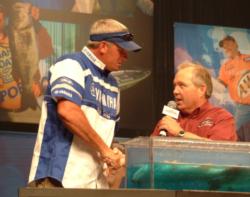 Matt Arey of Shelby, N.C., is in the fifth spot among the co-anglers with four bass weighing 7 pounds, 2 ounces. Arey won the 2006 Forrest Wood Cup and is looking for back-to-back championship victories.

“It was a productive day,” Arey said. “I fished with Greg Pugh, and he’s on really good fish.” 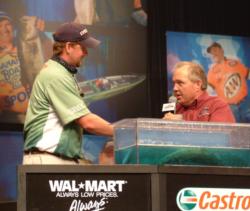 Rounding out the top 10 co-anglers on day one on Lake Ouachita:

The full field competes in the two-day opening round for 10 slots in Saturday’s competition based on their two-day accumulated weight. Weights are cleared for day three, and co-angler competition concludes following Saturday’s weigh-in. The top prize in the Co-anger Division is $50,000.