Hudson worms his way into final round 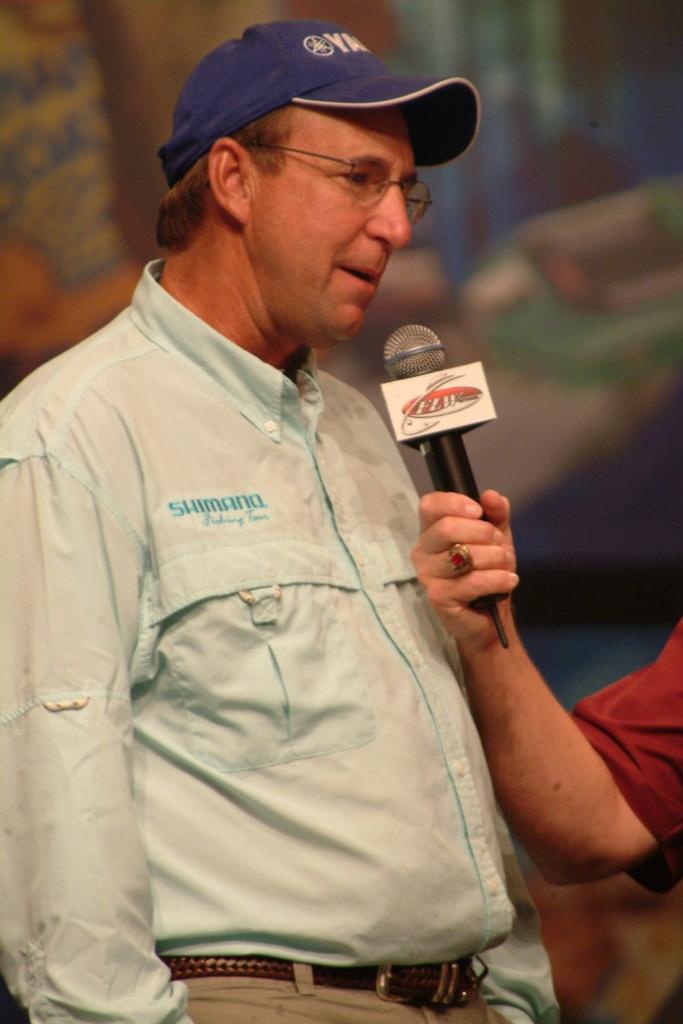 HOT SPRINGS, Ark. – With the high temperature nearly reaching triple digits, the bass were not in the biting mood on day two of the 2007 Forrest Wood Cup on Lake Ouachita. Many of the 81 pros were having difficulty finding and catching quality fish, but the co-anglers had it even worse.

David Hudson continues to make the best of the tough conditions. He caught another four bass on day two that weighed 6 pounds, 14 ounces, pushing his two-day total to 18 pounds, 7 ounces.

“My goal coming into today was to just catch a couple fish,” he said. “I felt using a drop shot gave me the best chance. After I caught two, I changed to the big worm and caught two more.”

More specifically, Hudson is using a 7-inch Roboworm in tequila color on the drop shot. On the ribbontail worm, he’s using a Zoom Old Monster in plum color.

On day two, he fished grass in 14 feet of water in Derby Creek with Totino’s pro Tim Johnson. 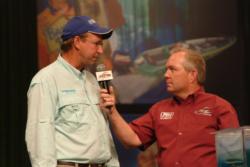 For the next three hours, he threw a topwater frog and tried flipping with a Brush Hog. Those baits yielded no fish, but Hudson is confident in his primary pattern.

“I spent six days of practice with Mark Davis and that was just invaluable experience. I’m just throwing what he told me to throw.

“This tournament is progressing the way I want it to. Thanks to Mark, I know what to do on this lake.”

In his career, the Jasper, Ala., native has 15 top-10 tour-level finishes. Without a doubt, he is one of the most accomplished co-anglers in the sport. He has not however, won a tour-level championship.

“I feel really comfortable in this atmosphere. I’m just going to do the best I can and see what happens from there.”

The only thing not in Hudson’s favor is the format. Tomorrow his 4-pound lead will be erased and he will start from zero just like the other nine co-angler qualifiers.

The lone Arkansan in the top 10 in the Co-angler Division is Kevin Koone of Greenbrier. Buoyed by a two-day combined stringer weighing 14 pounds, 13 ounces, Koone moved from third place to second heading into tomorrow’s crucial and final day of co-angler competition.

“I fished humps, deep grass lines and main-lake points today,” Koone said. “I feel like I can make a run at it tomorrow, especially if I get to fish grass.” 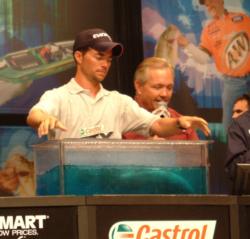 Koone’s key bait this week has been a 7-inch Berkley Power Worm in watermelon color with purple and red flake. On day two, he spent the majority of his time in Cedar Fourche and Crystal Bay.

This is Koone’s first Forrest Wood Cup appearance. He double qualified for this event, finishing third in the 2006 FLW Series points and 39th on the 2007 FLW Tour. On Lake Lanier in 2006, Koone won the first tournament of his young career.

“I’m shooting for 10 pounds tomorrow. It may take more than that, but that’s my goal anyway.” 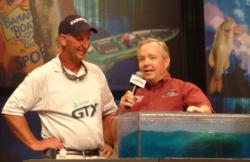 Bret Bell of O’Fallon, Mo., finished the day in third place after completing a huge comeback. Bell started the day tied for 35th, but moved up 32 places courtesy of a five-bass limit weighing 10 pounds, 10 ounces. His two-day opening-round total was 13 pounds, 6 ounces.

“I had a limit in the boat by 10 a.m.” said Bell, who used an 8-inch Zoom Speed Worm in watermelon-red color. “I think I have a real good chance if I get to fish deep like we did today.”

Partnered with pro Art Ferguson Friday, Bell presented his plastic bait in 20 to 30 feet of water targeting timber and grass.

“I think my bait is really the key, not many others are throwing it. They’re feeding on bluegills and my bait looks just like that.” 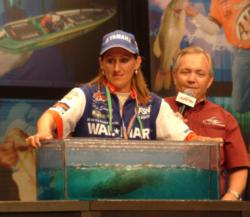 Karyn Sanchez of Midlothian, Texas, finished the opening round in fourth place with a catch of 12 pounds, 10 ounces. Sanchez is the second woman to make the top-10 cutoff in a Forrest Wood Cup.

Doug Caldwell, the mayor of Kane, Pa., finished in fifth place with a catch of 12 pounds, 2 ounces. 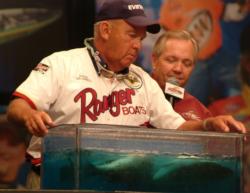 Caldwell was one of only three co-anglers to catch a five-bass limit Friday. He fished with local pro Scott Suggs, who is currently in second place.

Rounding out the top 10 co-anglers on day two on Lake Ouachita:

Weights are cleared for day three, and the co-angler competition concludes following Saturday’s weigh-in. The top prize in the Co-anger Division is $50,000.