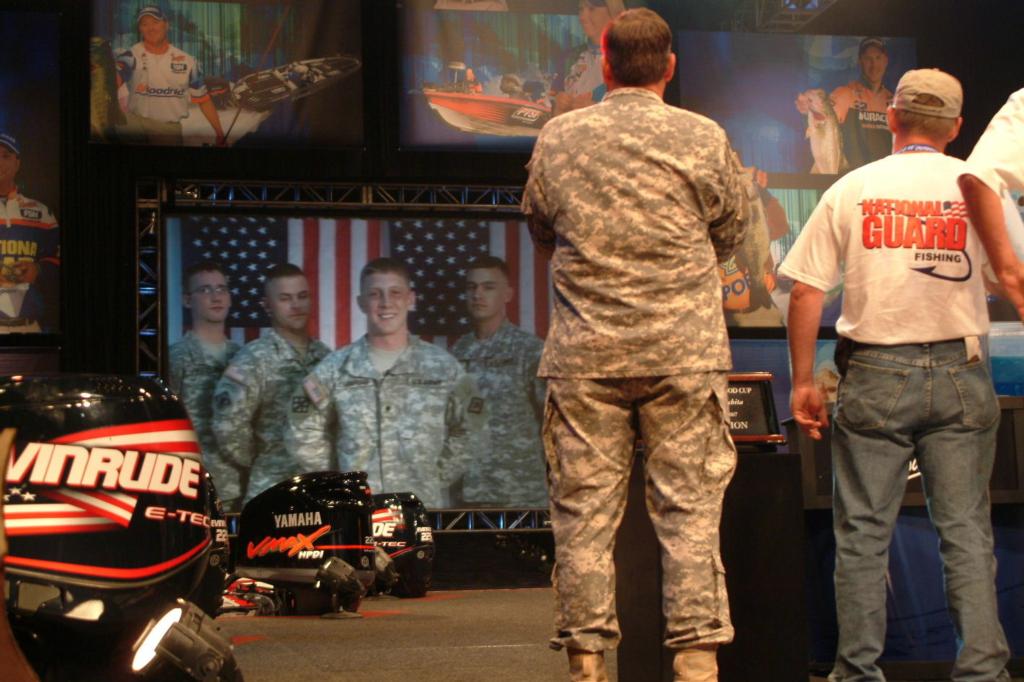 Family reunion … There was hardly a dry eye in the packed house today, as local military father Tommy Crawford was given the chance to see and speak to his son, National Guard soldier Levi Crawford, live via satellite. The young Crawford is a bass-fishing enthusiast who is currently serving our country overseas. Decked out in a National Guard T-shirt, the elder Crawford was surrounded by Forrest L. Wood, Hank Parker, Arkansas Governor Mike Beebe and two U.S. Army generals when Levi’s face appeared on the big screen in front of the thousands gathered behind his father in Summit Arena. “I hope there’s no pressure on you,” Tommy Crawford said to his son. “I’ve got two generals, a legend, the world’s greatest bass fisherman and the governor standing next to me.” Levi Crawford quickly responded, “World’s greatest bass fisherman? I used to be that.” The two were allowed to have a more private conversation via satellite backstage.

Hurry to Murray … Scott Suggs eliminated the idea of a local jinx today, as the Bryant, Ark., pro earned the sport’s first $1 million check on his home waters of Lake Ouachita. Last season, the Wal-Mart FLW Tour visited South Carolina’s Lake Murray, home of eventual 2006 Land O’Lakes Angler of the Year Anthony Gagliardi, and Gagliardi, too, broke the curse, winning $200,000 at that tournament. With the announcement yesterday that next year’s Forrest Wood Cup is headed to Lake Murray, Gagliardi is hoping he can pull a Suggs and win $1 million on his home pond. “I’ve been reluctant to think that (far) forward,” Gagliardi said. “I’ve been trying to concentrate on this event here.” Gagliardi said that on Lake Murray, the fish get a little tight-lipped in the summertime, much like they did this week on Lake Ouachita. But Gagliardi also said a couple of days ago that the reason why he always does so well at championship time is because he likes fishing in the summer. This is Gagliardi’s fourth consecutive final-round performance in the Forrest Wood Cup (formerly the Wal-Mart FLW Tour Championship). Can he make it a fifth at home? “Everybody talks about the local jinx,” he said. “I’ve already proven I can overcome that. Maybe I can prove it again.”

Rocking the country … The Summit Arena crowd was treated to a free pretournament concert today from platinum recording artist Tracy Byrd, who serenaded the crowd with a string of his well-known country hits, including “Watermelon Crawl” and “Keeper of the Stars.” What many in attendance may not have known, however, is that Byrd has long been an avid outdoorsman and has translated his love for fishing into good works for charity, most notably a crankbait he designed that benefits the Special Olympics. “There was a time in my life when I had to decide if I wanted to be a bass fisherman or a country singer,” Byrd said onstage. “Looking at how good these guys have become, I’m glad I picked country singer.” The crowd agreed, responding enthusiastically to Byrd’s hits, both old and new. However, as much as Byrd rocked the house, the cheers for him were no match for the rock-star-like reception Suggs received upon entering the arena this afternoon.

Slick performance … Castrol has been the presenting sponsor of the FLW Tour Championship for several years, and the company extended that sponsorship to the Forrest Wood Cup this year. It is remarkable, then, that this week’s top-10 field includes three Castrol pros: David Dudley, Mike Surman and Darrel Robertson. “We’re all really proud to represent Castrol,” Surman said. “To have four out of five (team members) make the championship and three out of the top 10 is unbelievable. We wanted one of the Castrol members to come home with a win.” That ultimately didn’t happen, though Robertson did come the closest, finishing second with 12 pounds, 8 ounces, a weight that ended up 4 pounds, 9 ounces behind Suggs. … Team Castrol wasn’t the only fishing team making noise this week. Two members of the Folgers team advanced to the final round, with Suggs, of course, ultimately becoming the sport’s first million-dollar winner. His teammate Gagliardi finished ninth, earning $30,000. “We’re talking about splitting the money among teammates,” Gagliardi quipped. 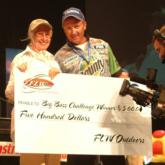 The other bass tournament … Suggs may be Arkansas’ newest millionaire, but he wasn’t the first one to win money for bass today at Summit Arena. Two viewers of KATV Channel 7 out of Little Rock earned a trip to fish with a pro today to try to earn a little cash in friendly competition. Ruth Woodruff hit the water with pro Craig Powers and emerged the victor in the bassing duel, as she and Powers brought in two fish that earned her $500. A $5,000 donation was also made in Woodruff and Powers’ names to the FishAmerica Foundation. The Woodruff-Powers team defeated another local viewer who fished today with pro Chris Slopak. Powers admitted he was a little concerned about taking her out in the heat, but she proved more than up to the challenge. “Ruth was a trooper,” Powers said. In her honor, Powers had his own $125 fee signed over to her. It may not be a million, but $625 is not bad for a pair of bass!

TBF Junior update … Dylan Peppers, 13, and Shane Lehew, 18, won their respective age divisions today at the conclusion of The Bass Federation’s National Guard Junior World Championship, giving the thousands of people in attendance at Summit Arena a glimpse at what the future of bass fishing may look like. “I’m excited, scared, a little bit of everything,” said Peppers of weighing in on the big stage just like the million-chasing pros. Both he and Lehew led their divisions on day one of the event and went on to earn $5,000 scholarships and a sponsor merchandise package. “This is awesome,” Lehew said. “I caught my big fish early and caught three back to back to back. Then I broke one off. It’s always bad luck to break one off.” Not today. Both Peppers and Lehew advanced to this week’s junior championship out of the TBF Southern Division. Peppers hails from Good Hope, Ga., and Lehew calls Charlotte, N.C., home.

61,976: Number of people who came to the outdoor show and Family Fun Zone surrounding the Forrest Wood Cup over the last four days.

24,000: Approximate number of people who attended the outdoor show today.

182,180: Dollars earned by Suggs in more than 10 years of FLW Outdoors competition before hitting the $1 million jackpot today. 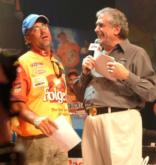 7-9: Heaviest stringer weighed in today, in pounds and ounces, caught by Jack Wade.

0: Number of five-bass limits weighed in today by the top 10 pros.

3: Number of bass bites Suggs said he got all day.

1: Number of those bites he lost.

12: Number of people inducted into the National Guard in a special ceremony that took place before today’s weigh-in. 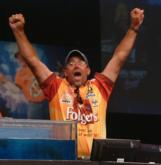 “More than anything, pleasing these people here.” – Suggs, discussing what all was at risk for him today. He was the crowd favorite by far due to his local status.

“If I can keep this up, I think I’ll be OK.” – Newly crowed Gain Rookie of the Year Bryan Thrift, on scoring three top-10 finishes this season.

“There are a couple of service stations who give you free coffee. It’s awesome.” – No. 7 John Devere, on the perks of scoring a top-10 finish at a major tournament. If he is excited about free coffee, we’re not sure his heart could have withstood winning $1 million.