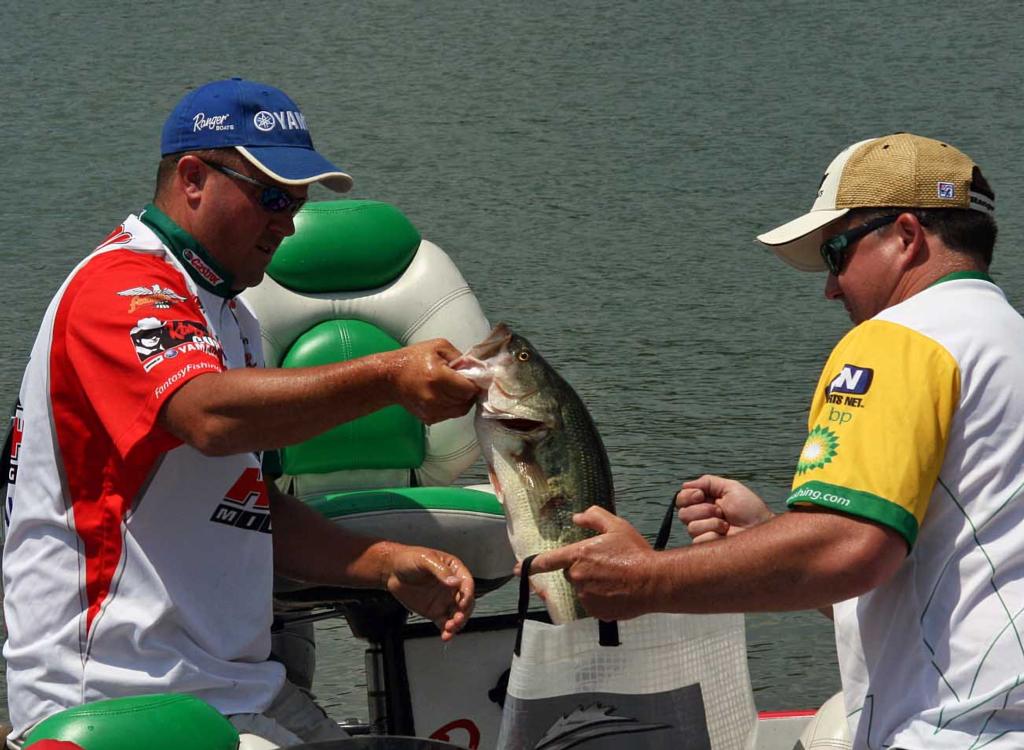 Martin’s big ride … A day before he would take the lead at the FLW Tour event at Fort Loudoun-Tellico lakes, National Guard pro Scott Martin of Clewiston, Fla., boarded a KC-135 refueling plane at the McGhee Tyson Air National Guard base in nearby Maryville, from which the aircraft took off and headed south to Pensacola, Fla. Over the Gulf of Mexico, the KC-135 linked with an F-22 Raptor for a refueling training mission. “That was a big deal, because the F-22 Raptor is a superstealth jet – a real top-secret fighter. So we were really privileged to see that plane.” Martin said he was able to view the refueling process 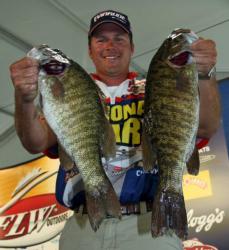 through an observation port in the belly of the KC-135. “We’re 25 feet away from this Raptor, and I’m looking into the cockpit – I can see everything. I can read the name on the (pilot’s uniform).” Most impressive, Martin said, was seeing the dedication and discipline of those who defend the nation’s freedom. “Yesterday was incredible. I had chill bumps the entire time. My job is cool, but what those guys do is incredible.” Did the experience give him a shot of enthusiasm for the tournament? “Yeah, absolutely.” The unit responsible for Martin’s once-in-a-lifetime trip was the 134th Air Refueling Wing.

Morgan planting his cover … Maintaining his lead in the Land O’Lakes Angler of the Year points race, Dayton, Tenn., pro Andy Morgan fished his way into third place with 19 pounds, 7 ounces. Placing high, he said, required a little habitat-enhancement initiative. Prior to the cutoff period, Morgan planted some brush piles in strategic locations in hopes of concentrating fish on spots that he could visit during the tournament. As it turned out, he did not need to utilize these spots on day one, so he’ll keep them in the mix for the tournament’s remaining days. “When you have this many people (fishing an area), you have to make something now and then. Thank goodness I was able to dodge most of it today.” Of the need to establish a competitive edge, Morgan said: “There are too many good fishermen, electronics are super – everything is (improved) from 10 years ago. If you don’t have a strategy, you’re not going to win one of these tournaments.” 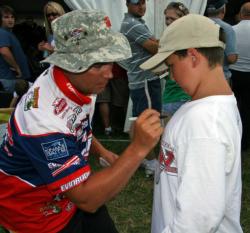 Hastings was exiting a creek after sundown when his Evinrude hit a submerged obstruction. He trimmed up his motor and found his skeg missing. “I thought that was the extent of the damage, so I drove 25 miles back to the (ramp), put the boat on the trailer and immediately started smelling oil.” With a cracked gear case, Hastings towed his rig to the Evinrude service trailer at 8:15 p.m., and the technician fixed the engine on the spot and had Hastings ready for his next day on the water. “I really appreciated that, because I lost no practice time. This is what I do for a living. It’s just like anyone else going to a 9-to-5 job. If I lose a day on the water, I’m not making any money and I’m not learning anything. Without the support of FLW and all the sponsors, that’s not possible to do.” 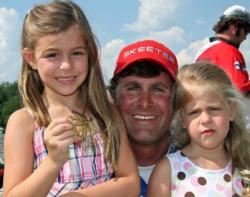 head jig with a skirt designed by his 6-year-old daughter, Callie. Sorting through her dad’s skirt materials, Callie selected watermelon, green-pumpkin and shad colors. Brandon fastened this selection to what he called the “Callie Jig” and put 16 pounds, 7 ounces in the bag.

6: Number of polka-dot colors on 3-year-old Andie Coulter’s sundress as she joined her dad, sixth-place pro Brandon Coulter, on the weigh-in stage.

9: Ounces separating first and second places on the pro side.

3: Number of packages of peanut M&Ms consumed by Dudley during his post-weigh-in interviews. (In fairness, these were snack-size packages.) 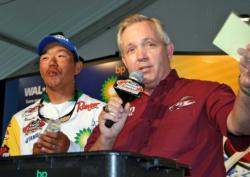 “Oh, I’m telling the truth. It was tough – for me.” – Pro Than Le, who joked that fellow competitors with big stringers were being less than honest about struggling on the water. Le said his 180th-place finish validated his statement about tough fishing.

“I’ve been lucky as all get out (on the water), but I’ve been really lucky to have the support of my family. My wife, my kids, my mother, my aunt – they’re all here.” – Prilosec pro Craig Powers.

“Otanjoubi omedetou.” – FLW Outdoors President and CEO Charlie Evans, instructing the audience on how to say “happy birthday” in Japanese to BP pro Shinichi Fukae, who turned 36 on the 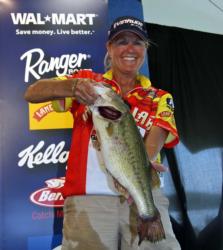 “There are so many boats on the water that you can’t sit still and really work a spot.” – Folgers pro Scott Suggs, lamenting the crowded scene on Fort Loudon Lake.