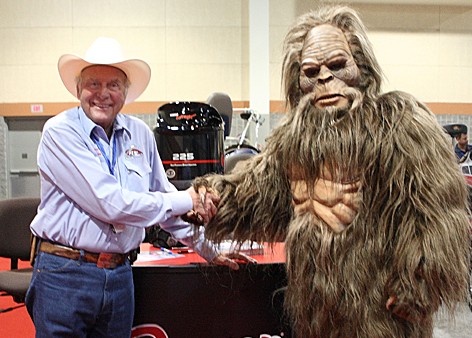 Sasquatch sighting … Have you heard the recent reports of Bigfoot being captured in northern Georgia? Well that’s nothing compared to what happened today in Columbia, S.C. Forrest L. Wood, the legendary founder of Ranger boats, actually shook hands with a live Sasquatch at the Ranger booth of the Forrest Wood Cup Outdoor Show. Not only that, Wood convinced the Sasquatch to pose with him for a picture. That obviously trumps finding a dead Sasquatch in the woods and keeping it in the freezer. All joking aside, Wood was posing with the Jack Link’s Sasquatch, who is competing in the annual Sponsor Mascot Tournament at the Land O’Lakes Trout Pond. One problem though – the Jack Link’s Sasquatch apparently doesn’t like to get wet. 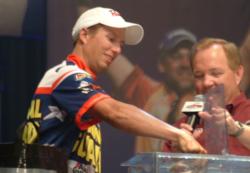 the Year award, but National Guard pro Brent Ehrler might get the last laugh. Dudley out pointed Ehrler 1003 to 1002 but failed to enroll for the Ranger Cup program. That means while Dudley won $75,000 for AOY, he also missed out on an additional $50,000 in Ranger money. Ehrler, who won Ranger Cup in 2007, will probably win again in 2008. In addition to finishing second in the FLW Tour points race, the Redlands, Calif., pro is currently on top of the standings in the National Guard Western Division of the FLW Series with two events remaining. For those not Ranger Cup informed, the program spans both divisions of the FLW Series and the FLW Tour. Anglers can pick their best five tournaments from the FLW Tour or they can go the FLW Series route. Since each division of the FLW Series has only four events, Ranger counts the East-West Fish-Off as the fifth event. 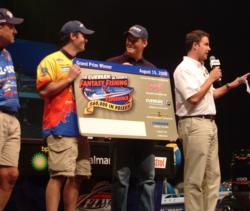 Evinrude outboard motor, Evinrude sponsored its own Fantasy Fishing game in conjunction with the launch of FLW Fantasy Fishing. Instead of picking a 10-angler roster, fantasy players picked three Evinrude pros, one from each allotted group. The overall winner gets a 2008 Ranger Z520 with a 250-horsepower Evinrude outboard, a $2,500 Cabella’s gift card, a $1,000 gas card and a day of guided fishing with an Evinrude pro. That winner turned out to be Phillip Little of Whitesburg, Ky. He chose to fish with 2005 Forrest Wood champion George Cochran. It may not be a million, but it’s still a heck of a prize package. 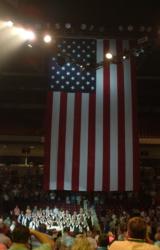 the singing of the national anthem. Two soldiers slid down cables from up above the Colonial Center rafters. The drop-in entrance startled the crowd in attendance. Then, a giant American flag was released from the concourse level and the Palmetto Mastersingers of Columbia began a beautiful rendition of the “Star-Spangled Banner.”

No practice necessary … Believe it or not, second-place pro Terry Bolton didn’t catch a single keeper bass in four days of practice on Lake Murray. Bolton is known as an awesome summertime jig fisherman. With years of experience on Kentucky Lake’s deep ledges, that type of fishing suits him best. So that’s what he started with on Lake Murray, but a workable pattern never developed. He eventually scraped the plan and started covering new water on the bank. To his delight, the shallow fish were cooperative. “I fished deep for 90 percent of practice and it was terrible,” he said. “So when the tournament started, I just went shallow and treated it like practice. Today was another pretty good day of practice.”

4: Number of five-bass limits weighed by the top 10 pros Saturday. 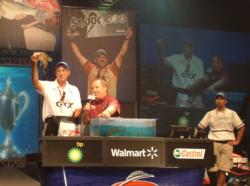 16-1: Weight, in pounds and ounces, of the heaviest stringer caught on day three by Duracell pro Michael Bennett.

27: Percentage of FLW Fantasy Fishing players who had Bennett in their top 10.

31: Percentage of Player’s Advantage members who had Bennett in their top 10.

“You know that game Who Wants to be a Millionaire? Nobody ever wins the million because they never take a chance. I took a chance today,” – Day-one leader Mark Rose. 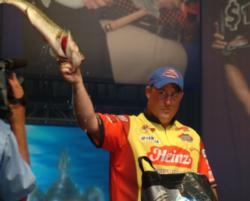 “This is the one. I’ve seen this fish three days in a row,” – TBF National Championship winner Brian Travis, who finally coaxed a familiar 5-pound bass into biting.

“I’ve been getting a ton of emails and texts from the club guys every night,” – Travis, on the support from his fellow TBF anglers.

“I actually caught that fish in practice and she was right where I left her,” – Pro Chris Baumgardner, on his 5-pound kicker.

The final takeoff is scheduled to take place at 7 a.m. Eastern time at the Lake Murray Marina and Yacht Club, located at 1600 Marina Road in Irmo, S.C.