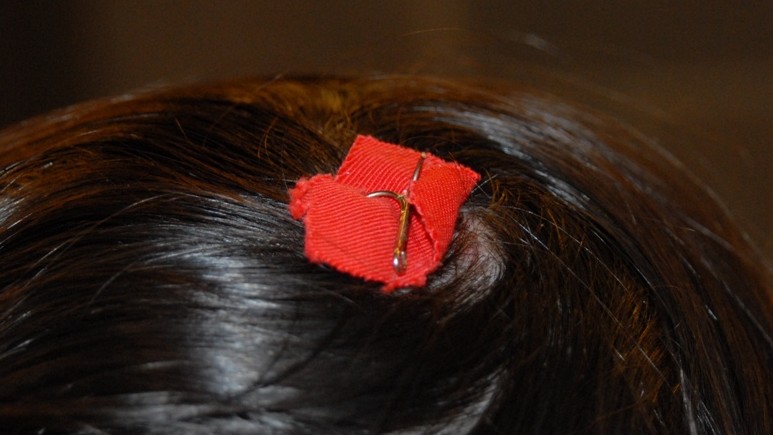 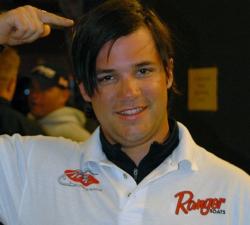 Bennett would be a dream come true. But for Alex Posey, it was an experience he would rather forget. After Bennett missed a fish, he aggressively cast his lure back in the water. It was a cast made out of frustration and instead of landing in the water it landed in Posey’s head. Rather than trying to pull it out himself, he left the hook in, which is technically the correct action to take. After showing it off to the Branson-area crowd, the Georgia co-angler will seek medical treatment for the injury, which was not serious. “I got a souvenir from the million-dollar man,” Posey said. Not only did the hook hurt, the fishing was bad as Bennett managed only two keepers and Posey took a goose egg.

Bold prediction comes true … No one has ever accused co-angler Frank Divis Sr. of having a lack of confidence. After weighing in two nice bass on day one, Divis made a bold proclamation. “I threw a jig today, I will throw a jig tomorrow and I promise you I’ll throw a jig Saturday when I make the cutoff,” Divis said Thursday. True to his word, the Fayetteville, Ark., native caught three keepers Friday and finished the opening round in sixth place. He remained sixth after catching one bass today. Amazingly, this was Divis’ 11th trip to the top 10 in FLW Tour competition. 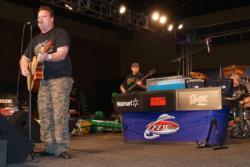 Encore for DoGtag … The band DoGtag gave its first FLW Outdoors performance at the Stren Series Championship last November. Today they hit the stage for encore performance and treated fans to hit songs such as “Take it Easy” and “Sweet Home Alabama.” DoGtag, which is based out of Branson, performs current and classic modern music hits. Not only are they musically talented, each member of the band is either currently enlisted or has served in the National Guard.

Nice trick … After weighing in four bass, Scott Canterbury went into a typical monologue about how tough the bite was and how he had never seen the lake until the Saturday before the tournament. Everyone in the crowd, including this writer and FLW Outdoors CEO Charlie Evans, thought 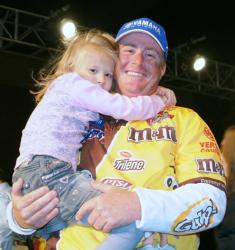 Canterbury was out of fish. Then out of nowhere he lugged out a 5-pound kicker. Bass-fishing pros frequently attempt stunts like this, but they are rarely successful. Scott Suggs tried a similar tactic later in the weigh-in but it wasn’t nearly as good. Credit Canterbury not only for catching a sizeable limit but also for displaying convincing acting skills.

Pressure mounts on Canterbury family … While Suggs failed at fooling the crowd, he did his best to put added pressure on Canterbury. “This is exactly where I want to be,” Suggs said of being second. “I was wanting the pressure to be on someone else going into tomorrow. Think about it Canterbury.” While the pressure doesn’t bother the 2008 Rookie of the Year much, it wreaks havoc on his wife. As a Player’s Advantage member, Dixie Canterbury receives mobile alerts which provide her with real-time catch updates during the final round. At the Chevy Open, her husband led after day three only to have his fish vacate his shallow-water area on day four. For most of the day, Canterbury didn’t have a single keeper in his livewell. “I know I get more nervous than he does – last time at Guntersville was just horrible,” said Dixie. “It (mobile alerts) just kept saying 0 (keepers), 0, 0, 0. Every time I got that text I cried. I was just so worried that wouldn’t have a fish to bring up. Once I saw that he had two keepers I relaxed.” Well Canterbury is back in the top spot so tomorrow promises to be another stressful day. “I told him not to be in the lead but here he is again.”

Ehrler gets a surprise visit … After missing the cut at Guntersville by the narrowest margin, Brent 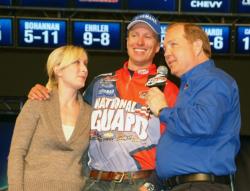 Ehrler got revenge and qualified for the top 10 at Table Rock. He also got a surprise visit from his wife today who traveled 1,619 miles from their home in Redlands, Calif., to get to Branson. She bought the flight ticket at 9 p.m. last night after watching the weigh-in on FLW Live. “I had to lie to him this morning,” she said. “I told him I was in bed and I was actually on the way to the airport.”

6: Margin of victory for Majors, in ounces.

4: Number of top-10 finishes for Canterbury in his last seven FLW Tour qualifiers.

10: Number of limits caught by the 20 finalists Saturday. 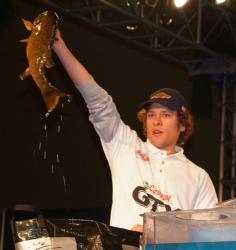 “I caught it on a 21-year-old Wiggle Wart, probably a year older than me,” – Co-angler Zac Cassill, a geology and ecology major at Winona State University in southeast Minnesota, on his 5-pound, 7-ounce smallmouth.

“Charlie I thought you were really building me up there by calling me a legend. But then you called Al Lindner to the stage,” – Co-angler David Lauer, who was the first person to weigh in.

“Fishing as a co-angler is like going to school. If you pay attention, you’ll learn. I’ve been doing this for 10 or 12 years so I’ve learned a lot,” – Divis.

“We’re about the same, expect Charlie wears those high heals,” – Castrol pro Carl Svebek, when asked by Chris Jones on day one if he was taller than Evans.