Hometown favorite delivers on day one of Forrest Wood Cup 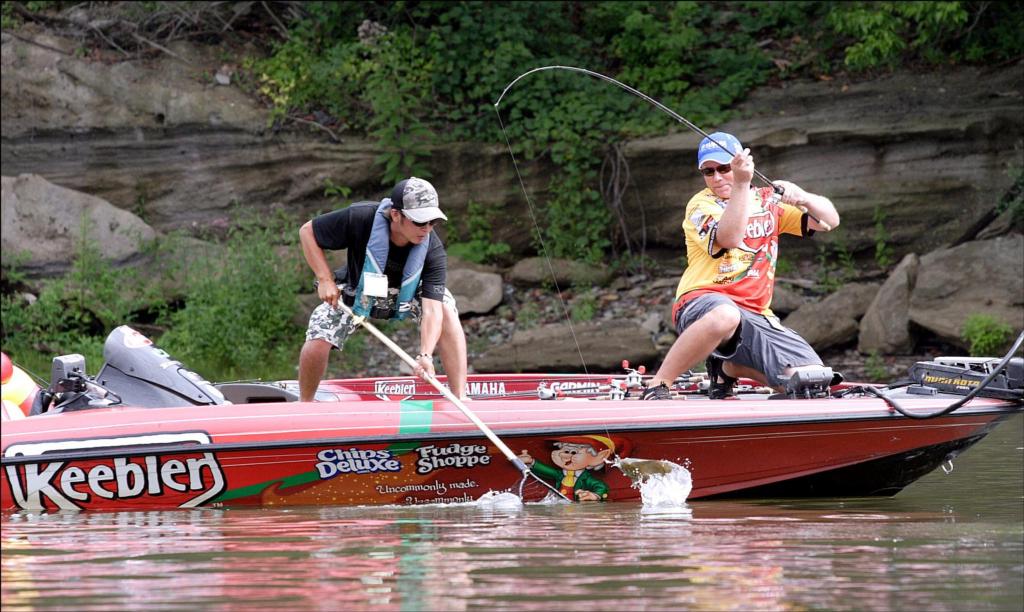 PITTSBURGH – Tournament bass fishermen are known as exaggerators, and when a $1 million first-place purse is on the line, credible information can be scarce. All week long we heard report after report of brutally tough fishing on the Three Rivers. But on day one of the Forrest Wood Cup, two dozen pros caught five-fish limits – some of them solid in size.

Pretournament favorite and Kellogg’s pro Dave Lefebre boated his limit by 9:10 a.m. after going through a few locks. That’s a heck of a start on lakes like Champlain and Guntersville, but it’s absolutely unheard of on the Three Rivers. But this is almost home water for Lefebre, who lives just two hours from Pittsburgh in Union City, Pa.

Years ago, Lefebre fished tournaments in this area, but he always focused his efforts on the Monongahela River. With so much at stake, Lefebre wanted to start fresh and approach the tournament with an open mind. 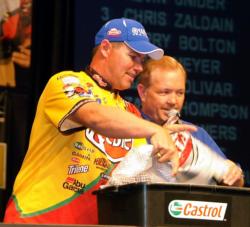 “I used to be a Mon guy,” he said. “I’d only fished the Allegheny maybe twice, and I’d never fished the Ohio. I basically started over, and it has worked great.”

Although he wouldn’t say which pool he is fishing, Lefebre is working a tailrace in the Ohio River. After catching a 3-pound kicker at 10 a.m., he camped on his spot all day. Fishing the same general area is the General himself – Larry Nixon. The Chevy pro also caught a limit early and hunkered down to stake his claim.

Nixon and Lefebre can see each other, but they’re not on top of each other, and neither angler feels threatened by the other’s presence. Lefebre said he has two specific rocks within the area that are 50 yards apart. Amazingly, those two spots produced 25 keeper smallmouths today. As far as presentations are concerned, Lefebre understandably didn’t want to get into specifics, although he admitted he is fishing both slow and fast.

“I thought I could do well, but I was just hoping to catch 5 or 6 pounds today,” added the former musician, who finished the day with 8-13. “I tried to make my spot work for today and hopefully make me the cut. And then I’ve got all my other stuff to fall back on.”

His weight could have reached double digits if not for a lost fish. After setting the hook, Lefebre began reeling in what he thought was a small keeper. He actually told his co-angler he didn’t need the net. Then he saw it was another 3-pounder, and before he knew it, the fish was gone.

“The conditions were almost ideal today – we had more current from the rain yesterday, and that really helped position the fish.”

Lefebre thinks this is a spot that will replenish, but he knows he still has to manage it. He didn’t intend to catch so many keepers, but that’s just the way it worked out.

“My plan was that I was going to leave it alone once they stopped improving. But with each fish, I’d gain an ounce or 2. There has never been a tournament where managing fish has been so important.”

In second place is pro David Curtis, aka the King of Texas, who caught 8 pounds, 12 ounces. Fishing 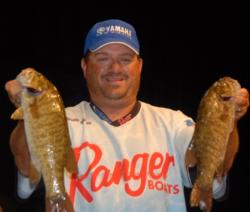 fans haven’t heard much from Curtis this season as he does not fish the Walmart FLW Tour or the Walmart FLW Series. But make no mistake, Curtis’ talents are on par with the best in the sport. By winning the Stren Series Championship on Table Rock Lake last fall, the Trinity, Texas, native punched his ticket to the Cup by being the highest-finishing Texas Division pro. Curtis also used the Stren Series Texas Division to make the 2008 Forrest Wood Cup on Lake Murray.

“I don’t really like smallmouth fishing, but summertime and fall are my favorite seasons,” he said.

Curtis’ summertime and fall accolades are astounding. In addition to winning the Stren Series Championship last year and taking third in 2007, Curtis has won the Texas Tournament Trail Championship three times. In short, he’s an angler that always fishes to win, and pressure does not affect him in the least bit.

Curtis did not expect to catch 8-12 Thursday, not in his wildest dreams. After spending 12 days on the Three Rivers during prepractice, Curtis was still confused with what the fish were doing. But on day one of the official four-day practice, he figured some things out. Not surprisingly, he returned to the site of that catch on day one of the tournament.

“I’m covering a lot of water. The bite was good in the morning, and then it slowed by about noon.” 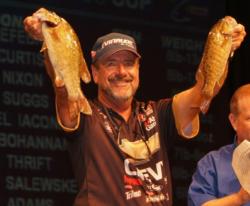 Nixon may not have caught what Lefebre did on day one, but it likely won’t matter as the weights are zeroed once the final round concludes Friday afternoon. Nixon caught 8-4 today, but what is more impressive is that his co-angler partner caught 7-10. That means 10 bass weighing over 16 pounds were caught from Nixon’s Stratos boat.

“When I found this place, I caught a fish; and when I was bringing him in, I saw about a dozen other fish following him up,” Nixon exclaimed. “They were competing for the bait. When I saw that, I thought maybe I was dreaming. I didn’t know there were that many bass in this river.”

Nixon left Steelers Quay this morning scared to death as boat No. 71. To his delight, there was no one in his area when he arrived. With a limit already in the boat at 11 a.m., he caught a 2 ¼-pounder and decided to play defense the rest of the day.

“I’m fishing a little current break with some structure on the bottom. I’m not sure what is down there, but I think it’s rocks. I’m casting a drop-shot, and I’m using several baits. I caught a limit so fast on that drop-shot, it made my head spin.”

Nixon admits he has no backup plan in case this spot runs dry.

“I’m just going to ride this like a horse. Just keep feeding it and keep riding it. All this means is that I don’t have to catch as much tomorrow.”

After catching a limit worth 7-12, Folgers pro Scott Suggs is in position to win another $1 million at the Forrest Wood 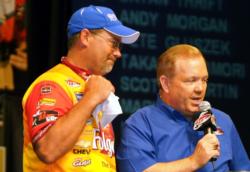 Cup (he was the first $1 million winner in 2007). But hot on his heels with 7-10 is Michael Iaconelli, who took fifth at the 2005 Bassmaster Classic on the Three Rivers. Ironically, the two are sharing water one lock up on the Allegheny River.

“When I got to my first spot, I was alarmed because it looked like solid mud,” Suggs said. “Then I caught one waiting for the lock. When I got to the next pool, I limited out in an hour; things just fell into place.”

Suggs said he used bigger, heavier soft plastics in green-pumpkin color today. He described his pattern as “old Arkansas River-type stuff.” Tomorrow he plans to use the same baits in black with red flake. The red-flake baits look great in dirty water, but he took them out of his boat Wednesday night, thinking they wouldn’t be needed.

“I’m just spot running – fishing key little spots and key little things. I didn’t get to fish some of my better spots today because of the mud. I think they still live there, and they will eventually adjust and go back to eating.”

While Iaconelli shared a stretch of the Allegheny with Suggs, he also fished the Ohio. He started his day by heading toward the first Allegheny lock. When he missed the lock by a matter of seconds, he nearly had an infamous Iaconelli meltdown. Instead, he calmly turned his boat around and began fishing 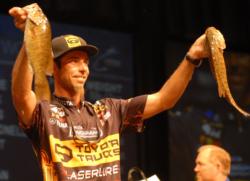 “On my very first cast, I caught a 2-pounder; it was crazy,” said Iaconelli.

The entire day was far from magical, as Iaconelli sorted through 20 bites, only one-quarter of which were keepers.

“Any time you catch a limit on the Three Rivers, you ought to be proud. I worked all day to catch what I did, and I was fortunate to get three quality fish.”

The Runnemede, N.J., pro said he used a combination of both finesse- and power-fishing on day one. The cloudy weather, in particular, allowed him to power-fish more than he initially expected.

“My best day of practice was only about 5 pounds, so I’m ahead of the game.”

Rounding out the top 10 pros at the Forrest Wood Cup after day one:

Tomorrow’s takeoff is scheduled for 7 a.m. Eastern time from Steelers Quay, located at Art Rooney Drive across from the South Plaza of Heinz Field in Pittsburgh.