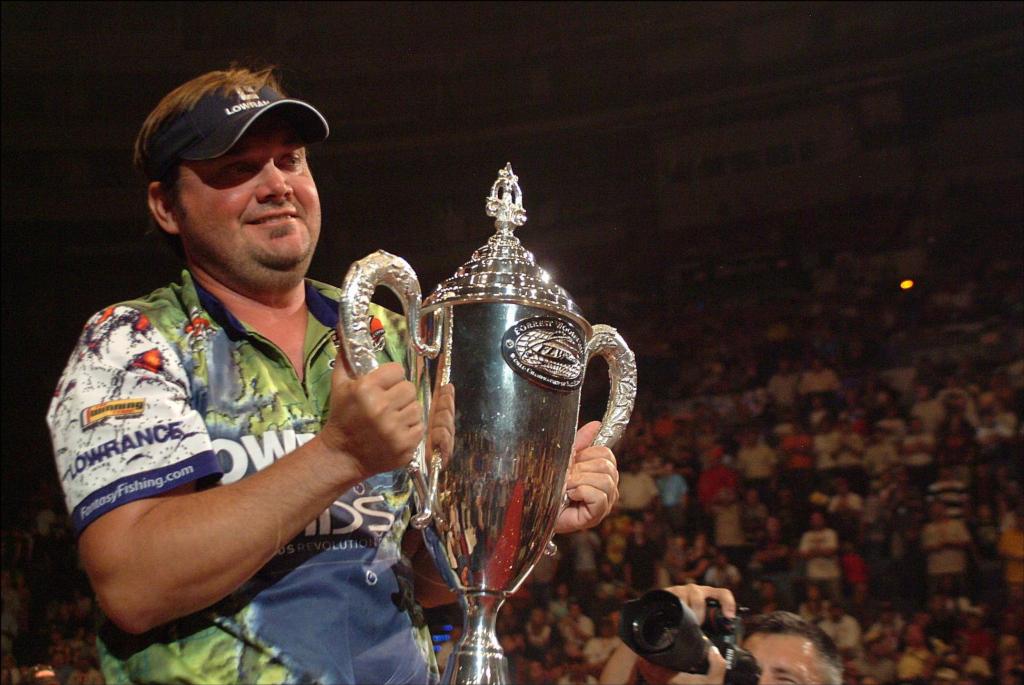 Hackney’s rollercoaster ride ends in victory… After day one of 2009 Forrest Wood Cup competition, Greg Hackney of Gonzales, La., found himself languishing in 36th place with a total catch of 3 pounds, 1 ounce. Obviously, at that rate, Hackney was destined to be nothing more than a small footnote at one of the preeminent bass-fishing events of the season. However, on day two the Louisiana native did something that made even the most seasoned bass pros drop their jaws – he landed an incredible 11-pound, 12-ounce sack on one of the most difficult bodies of water in the country – the Three Rivers. Even elite pro Michael Iaconelli couldn’t believe what he was seeing, remarking, “Did (Hackney) run to Lake Erie to catch those?” Neither the locals nor pros could quite grasp how Hackney could boat such a huge sack on Three Rivers. However, just when it appeared that he had regained his footing, Hackney could only manage a four-fish stringer weighing 4 pounds, 3 ounces on the second-to-last day of competition – an effort which dropped him back to sixth place overall. But then the finals resumed, and 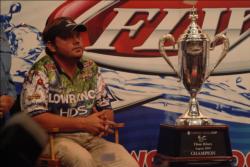 Hackney did what most great pros often do – he persevered to the end, fought through the obstacles and finished the day with the first-place trophy held high up over his head. “I don’t know what to say,” said Hackney, his voice shaking and eyes watering. “This is the most awesome day of my life. This is by far the highlight of my career. It’s going to take years to soak this in.” For the second time in four days, Hackney managed to land the biggest stringer of the day – this time recording a 5-pound, 6-ounce bag in the finals, on the day when it mattered most. But that’s not the only thing Hackney landed. He also walked away with a $500,000 first-place prize and one of the most prestigious titles in all of tournament bass-fishing.

Ike comes up short … One of the most recognizable and excitable anglers in the sport of bass fishing failed by a mere 3 ounces in his bid to write his own dream ending to the 2009 Forrest Wood Cup. With Hackney already having weighed in, Ike came to the scales, dropped five fish in the tank and waited patiently while Forrest Wood Cup tournament host Charlie Evans delivered the results. Unfortunately for Ike, his 4-pound, 10-ounce final-day catch wasn’t quite enough to catch the eventual champion. “It’s sickening to lose by 3 ounces,” said Iaconelli, who finished in fifth place during the 2005 Bassmaster Classic on the same body of water. “I lost one fish in the entire tournament, and it happened to be yesterday – so yeah, it hurts.” However, despite losing, Ike remained in relatively good sprits. “You know, I had a good tournament, and I really enjoy urban fishing,” said Iaconelli. “And honestly, I didn’t think that I had enough weight to win anyway, so it was kind of unexpected to have even had a shot at the title.” Unlike the other finalists, Ike completely abandoned his fishing area after the second day of competition, opting to pursue an entirely different strategy during the final two days of tournament action. While it was a risky move, it nearly paid off. “I knew that you had to fish for consistency and that you pretty much needed a limit each day,” said Iaconelli. “The first two days I fished Gulp minnows, drop-shots and a Jackal jerkbait. Then I switched to a 5-inch Gulp sinking minnow with a Tru Tungsten Ikey Head.” Unfortunately for Ike, after moving to an entirely different pool of water on Three Rivers for days three and four, the conditions changed to such an extent that it was difficult to fish his new area. “The problem was that my (final) water really dirtied up because of all the rain,” he said. “But overall, I had a great event. Greg is a great fisherman, and it was just meant to be for him. That’s fishing. If it’s meant to be, you’re going to win. There is no disappointment here.” However, Ike did walk away with a nice consolation prize. For his efforts, Ike took home a second-place check worth a cool $100,000.

Last-minute heroics salvage tourney for Lefebre … Heading into the 2009 Forrest Wood Cup, Dave Lefebre had plenty of pressure on his shoulders. After all, he was the hometown favorite, he had the stands packed with friends and family, and there was the little issue of fishing with a $1 million first-place award on the line. But while everything seemed to go smoothly over the first two days of competition, the rain and changing conditions really threw a monkey wrench into Lefebre’s efforts. Nearing the end of day three, Lefebre had exactly zero fish in the boat. “While all the other guys were locking back through, I decided to stay and fish a little longer because I really had nothing to lose.” As fate would have it, Lefebre hooked into a 3-pound, 15-ounce bass with time winding down for his only catch of the day. While it wasn’t how he’d imagined the tournament unfolding, at least Lefebre had a fighting chance in the finals as he was now only 2 pounds, 7 ounces off the lead. However, by the time Sunday’s finals rolled around, Lefebre once again found himself struggling mightily. “I had nothing again late in the day, and for the second time in a row, I stayed and fished while all of the other guys locked back through.” This time, however, Lefebre discovered that he was playing with fire. After landing yet another last-minute catch (ironically caught while sitting down in his boat being interviewed by Versus camera crews), he realized he had to get back to weigh-in in a hurry. “I knew I had to get back to Pittsburgh by 4:10 p.m., but when I went to the lock, they waved me off. There was barge traffic and another paddle-wheel boat already in the lock, and I didn’t have priority this time.” Whether it was fate, sheer determination or the overwhelming graciousness of the lockmaster, Lefebre managed to squeeze his Ranger boat into the lock. “I think I probably broke every state regulation possible. But the lockmaster went the extra mile for me. He was awesome.” In the end, Lefebre got back to weigh-in with “20 seconds left to spare.” As a result, Lefebre salvaged an eighth-place finish. “You know, I’m disappointed. But it’s been a great week overall. In a lot of ways, I lived the dream. I had people out on the water cheering me on all week. Sure, I would have like to have pulled it off. But it just didn’t work out. In a lot of ways, my fans got to live the downside of tournament bass fishing right there with me.” 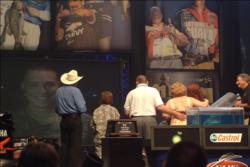 Greetings from Iraq … In many respects, perhaps the most emotional moment of the entire day transpired during pre-weigh-in ceremonies when National Guard Lt. Col. McHugh helped coordinate a satellite link hookup between Pennsylvania Army National Guard Spc. Eugene “Chip” Conrad – who is currently stationed in Iraq – and his family, who was in attendance at the Forrest Wood Cup in Pittsburgh. As Eugene (Chip’s father), Glenda (his mother) and Chip’s girlfriend, Mindy Demio, stood onstage, Chip appeared on a giant screen. The Conrad family, who has weathered three separate deployments of their son to Iraq, could barely contain their emotions. The family exchanged greetings and prayed for their son’s safe return. As an added bonus, the family was permitted to go backstage and continue the satellite hookup conversation with their son immediately after the onstage ceremony had ended. The audience, Ranger Boats founder Forrest L. Wood and fishing legend Hank Parker applauded mightily during the makeshift family reunion, a display which left few dry eyes in the entire arena. While the final weigh-in had yet to transpire, the Conrad family reunion managed to put the entire event into perspective for nearly everyone involved. It truly was a touching moment. 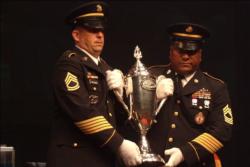 0: Number of anglers who have successfully captured two Forrest Wood Cup titles since the tournament’s inception in 1996.

2: Total purse, in millions of dollars, allocated for the 2009 Forrest Wood Cup.

2.98: Average weight, in pounds, of the catch of today’s pro field.

29: Total number of fish caught by the pros in today’s competition.

29-8: Total weight, in pounds and ounces, of fish caught on the final day by the pro field. 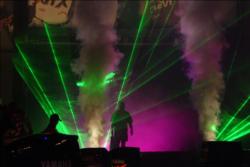 “There is a bond among fishermen that you don’t find anywhere else.” – Forrest L. Wood, commenting on the great sport of fishing.

“I’m ready to get back home and party.” – Terry Moberly of Berea, Ky., the $1 million grand prize winner of the 2009 FLW Fantasy Fishing contest, commenting on his future plans immediately following the conclusion of the 2009 Forrest Wood Cup.

“I had one of those special (fishing) holes where you can win. The problem was that the conditions changed, and I didn’t really have a backup plan.” – Cup finalist Larry Nixon, on how the changing conditions on Three Rivers sabotaged any chance for a tournament title.

“You can’t win this tournament on the first day, but you can lose it. And that’s what happened to me yesterday.” – Cup finalist David Walker, commenting on his disappointing day-three performance when he only managed to net 13 ounces total.

“That’s the first bass I ever caught sitting down.” – Forrest Wood Cup pro Dave Lefebre, who caught his only bass of the final day of competition while fully reclined in his boat during an interview with a Versus television camera crew.

“It’s been a crazy rollercoaster ride. I’m just glad it’s over; I need to take a nap.” – Lefebre, talking about the stress of competing in one of the most difficult tournaments of his career.

“I had to trash-fish. I don’t even call it junk-fishing. And I’m not very good at it.” – Finalist Scott Suggs, talking about his fishing strategy during the final few days of Forrest Wood Cup competition.

“I really enjoy places like this, where a keeper means a lot. It’s way better than a slugfest.” – Cup finalist Cody Meyer, on his preference of participating in difficult tournaments.