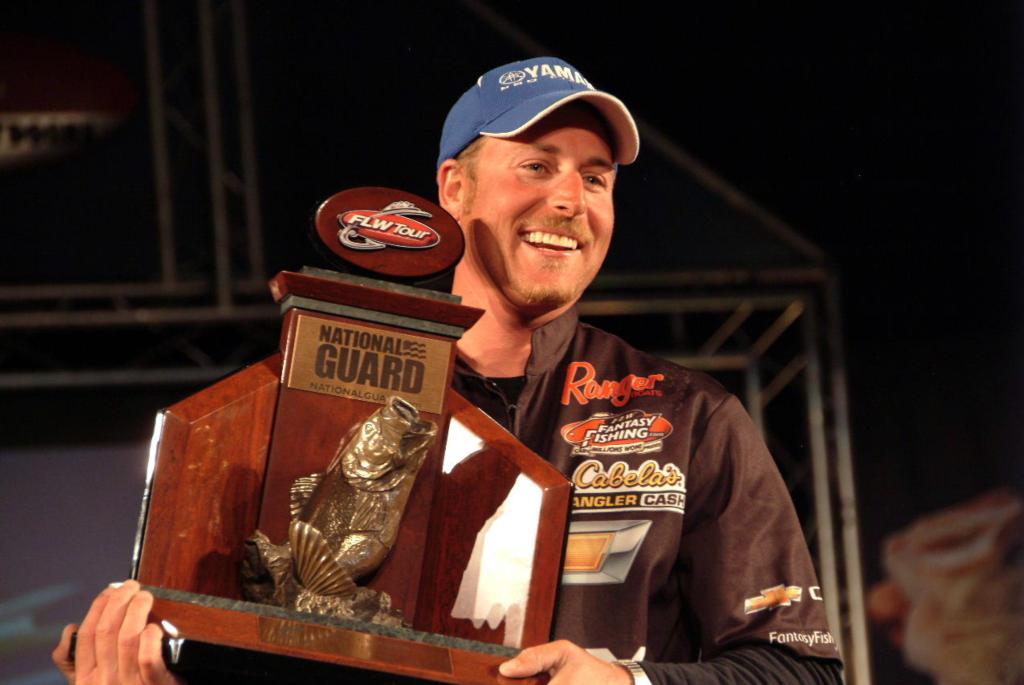 CHARLOTTE, N.C. – What a day for Bryan Thrift. Using a staggering four-day catch of 58 pounds, 5 ounces, Thrift cruised to an FLW Tour title on Lake Norman. While that alone would be enough cause for celebration, there were plenty of other remarkable feats that materialized with victory.

Throw in the fact that he won on his hometown lake, in front of family and friends, and has a new child on the way and it’s pretty clear that Thrift is living a dream come true.

“I’ve had a lot of top-10 finishes on the Tour (10 to be exact), so to finally get a win is really special,” said Thrift, who hails from Shelby, N.C. “When I fished here last year, I didn’t even get a check, so I got a little revenge today. We all thought 12 1/2 pounds a day would be enough to win the tournament. So this definitely exceeded my expectations.” 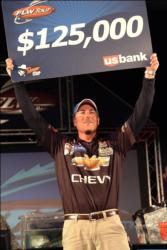 Thrift, who recorded nearly 15 pounds a day for four consecutive days, was nearly at a loss for words trying to explain his blistering hot streak over the past month.

“I don’t know what’s going on really,” said Thrift. “I just have a lot of confidence right now. Last year, I didn’t have that same confidence level.”

Thrift, who has spent years fishing Lake Norman, argued that he had an acute advantage over the majority of the field due to his local experience. Because the fish were largely in prespawn mode, the advantage that sight-fishermen normally would have was nullified. As such, Thrift was able to capitalize on his knowledge of prespawn fishing patterns, attacking docks housing underwater brush piles and targeting rocky banks holding staging bass.

“I probably fished 100 docks a day,” said Thrift, commenting on his run-and-gun type of fishing style this week. “I mostly used a 1/2-ounce jig in a crawdad color, square-bill crankbaits and a few Senkos. But I probably only went back to the same water about 30 percent of the time all week. If I caught a 3-pounder in an area, I went back. But otherwise I fished new water.”

During the final day of competition, Thrift started at the lower end of the lake throwing a crankbait. Then, once he got his limit, he started targeting bigger largemouth bass to augment his sack.

“I was extremely happy at about 9 a.m.,” he said. “I had a limit and tried to (cull), but I never could find the big bites. I actually started to get nervous because I thought (second-place qualifier) Rusty Trancygier was capable of busting a 15-pound bag.”

However, in the end, nobody came close to Thrift’s four-day total. And that was just fine with him.

“It feels good. It’s really nice to finally get this win,” he said. “Now we can ease our minds and go out and buy some diapers and stuff.” 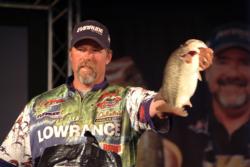 While most of the talk this week centered around the success of the local North Carolina contingent, Rusty Salewske of Alpine, Calif., quietly turned in one heck of a fishing performance – and one heck of a comeback as well.

Languishing in a tie for 69th place after the first day of competition, Salewske moved up to 17th place on the second day. Finally, on day three, Salewske managed to put all the pieces of the puzzle together, turning in a 13-pound, 9-ounce bag to grab the fourth qualifying spot heading into the finals.

While Salewske’s four-day weight of 49 pounds, 7 ounces came up short, the California native still walked away with a second-place finish as well as a check for nearly $39,000.

“I can’t even believe I ended up in second place. I just kind of hung in there,” said Salewske. “I had 13 pounds again today, and that surprised me. I didn’t think I had that much. It’s my best finish on the Tour, so I’m happy.”

Salewske, who targeted “dirty” water all week, said he used a combination of square-bill crankbaits and jigs to land the majority of his catch.

“The key was the dirty water,” said Salewske. “It didn’t really matter where I fished as long as the water was dirty and reasonably close to deep water. But I was catching them on docks, lay-downs, boulders, trash – you name it. I also figured out that once you caught a fish (on structure), you couldn’t go back to that spot. That was it. But you could throw immediately toward something else a foot away and still catch them.”

Salewske also said that had a few things gone differently, he just might have been holding up the trophy after today’s weigh-in.

“I lost so many fish that first day. I probably could have brought back 17 pounds if everything went right,” he said. “But, hey, that’s life.” 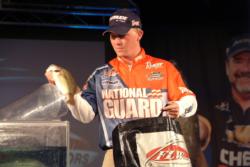 Thrift’s longtime friend and fishing partner Andy Montgomery of Blacksburg, S.C., used a total catch of 49 pounds, 3 ounces to walk away with third place overall as well as more than $29,000 in prize money.

Although Montgomery was considered one of the few anglers who could possibly derail the fishing freight train known as Bryan Thrift, Montgomery’s big-bite pattern went south when it mattered most in the finals.

“I caught five spots, but the key (to winning) is catching largemouth bass, and I didn’t catch any today,” said Montgomery. “It was brutal out there for me today. I didn’t catch my fifth fish until 2 p.m. It was just brutal. I really burned it up today. I probably fished over 100 docks. But I got in a bad habit of (fishing) history instead of running patterns. But my hat’s off to Bryan. He’s done one heck of a job this week.”

Montgomery said that his daily strategy included fishing pole docks for spotted bass in the morning. Later in the day, Montgomery would then target float docks to augment his sack with kicker largemouth bass. Montgomery’s bait of choice was a 1/2-ounce Shooter Lures jig.

While Montgomery didn’t walk away with the title, he said he enjoyed the experience of fishing one of his all-time favorite lakes.

“It was a great week,” said Montgomery. “I had a lot of fun, and I’m really happy for Bryan.” 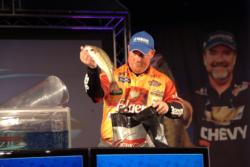 On the strength of a total catch of 44 pounds, 5 ounces, Brian Travis of Conover, N.C., finished the FLW Tour Lake Norman event in fourth place, cashing in on over $19,000 in winnings.

“If I had to have a finish like this, I couldn’t have asked for a better place to have it than right here on Lake Norman,” said Travis. “I really had a lot of fun this week. I’ve got no complaints.”

Travis said that his key bait this week was a homemade jig in a green-pumpkin color coupled with a Zoom chunk.

“I mostly targeted staging bass on brush piles in 8 to 10 feet of water,” said Travis. “During the finals, I had a good game plan. I was going get a limit and then run up the lake and fish for largemouth. But I think the cold front that moved in last night really shut down my fish. But I’ll tell you what, I’ll take a top-five finish here any day.” 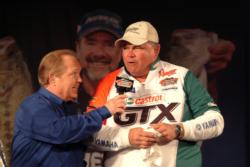 Although Rusty Trancygier of Hahira, Ga., started the day in second place overall, he experienced plenty of problems during the final day of competition. In the end, Trancygier only managed a catch of 2 pounds, 8 ounces in the finals, which dropped him to fifth place overall.

“They dropped the water on me 3 to 4 inches, and it was a real struggle to get in my area,” said Trancygier. “And that was basically the only good area I had. Because of the low water levels, it took me a long time to get in and get out, and I probably shouldn’t have stayed there as long as I did.”

Throughout the week, Trancygier targeted backwater pockets and coves with a combination of Lucky Craft crankbaits and Mann’s Baby 1-minus spinnerbaits. However, not being able to successfully take advantage of his main spot – known as the “Lily Pond Hole” – sealed his fate in the finals.

“I knew there were plenty of fish there, so I was really committed to that area,” he said. “It just didn’t work out today. But I had a great time.”

For his efforts, Trancygier walked away with nearly $17,500 in prize money.