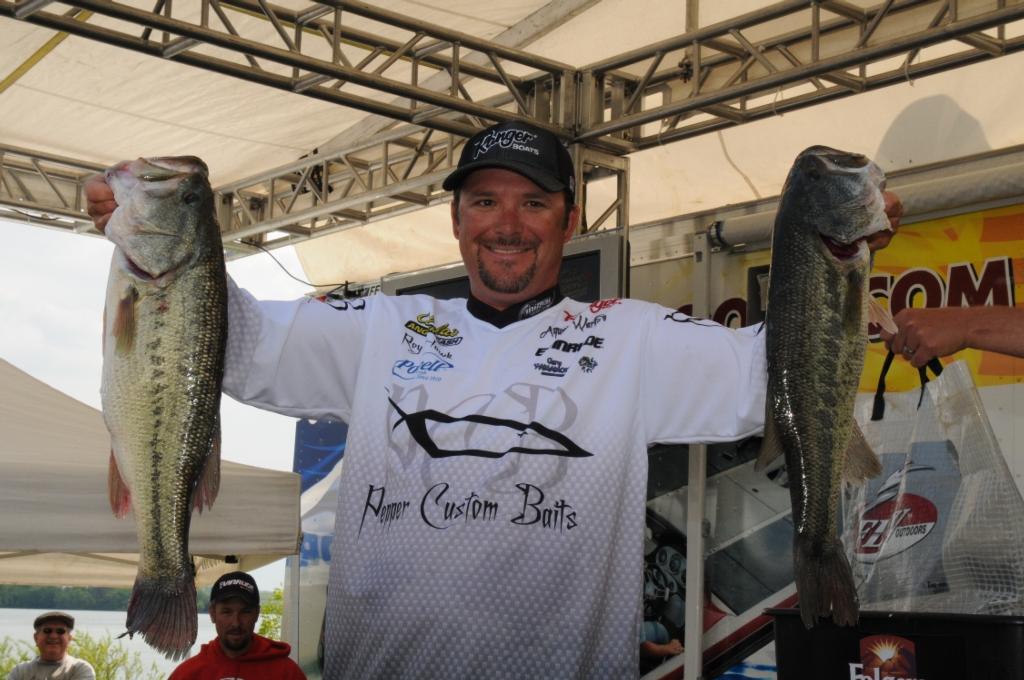 LENOIR CITY, Tenn. – Catching fish at the FLW Tour’s third qualifier of the year on Fort Loudoun-Tellico lakes isn’t a problem. The difficulty lies with locating the big ones. Many pros are sorting through a dozen short fish just to get one skinny keeper. But a handful of heavy hitters figured the big girls out on day one. Leading the tournament with 20 pounds, 14 ounces is Salt Lake City pro Roy Hawk.

Fresh off a top-10 finish at the American Fishing Series event on Lake Ouachita, Hawk experienced a solid practice. He was catching a few 4- and 5-pounders each day and was confident he could amass a limit. However, he never dreamed he’d surpass the 20-pound mark.

“I caught the two smallmouths early, and then I went to one of my better largemouth areas and caught 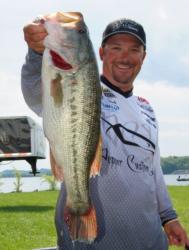 that giant,” said Hawk, who has three FLW Outdoors wins to his name. “I never saw the fish; I didn’t know it was there. I just caught it flipping.”

That largemouth weighed over 7 pounds and was unofficially the heaviest bass of the day. Hawk believes his fish are either spawning or already have spawned.

“If they’re on bed, I can’t see them. They seem like postspawn fish to me.”

Hawk doesn’t believe he can duplicate his opening-day success, but he won’t necessarily need to. Instead, he’s hoping to demonstrate some consistency.

“I don’t know where to find the giants, but I’ve got a couple good smallmouth and largemouth areas.”

Hawk estimated that he caught 10 fish on the day, and only seven were keepers. He’s throwing a bunch of different lures but his main weapon is a 1/2-ounce Pepper jig in sticky-green color.

“Everything went so smooth today. I had a great feeling about it this morning, and everything went perfect. It’s really neat when it all comes together.”

One month after claiming the FLW Tour qualifier on Lake Norman, Bryan Thrift is once again in contention to win. While he fished a prespawn pattern at his home lake, Thrift is admittedly sight-fishing 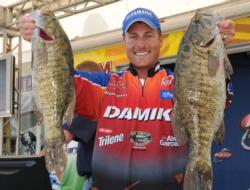 in Knoxville. He found five smallmouths spawning during practice, and today he caught all of them. They weighed an impressive 20 pounds, 3 ounces.

“I had five smallmouths on bed, and I caught all of them by 9 a.m.,” said the Shelby, N.C., pro. “I culled one smallmouth later in the day with a 3-pound largemouth.”

Thrift’s big fish was an impressive 6-pound, 2-ounce smallie. He hooked it earlier in the day, but it broke Thrift’s line. It took him about 15 minutes to get her to bite again. This time, she went for a ride in his Ranger livewell.

“The rest of the day I spent looking, but all I found is one more smallmouth. That’s it – I pretty much burned everything I had.”

Thrift caught his fish with a Texas-rigged Damiki Hydra (green-pumpkin).

“Tomorrow is going to be a hunt-and-peck day. I think it’s ridiculous that I can’t catch a keeper just running the bank. But I can’t.” 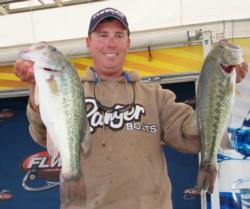 In third place with 17 pounds even is Ocala, Fla., pro Glenn Browne. Browne used a swimbait and a tube around lay-downs and docks to get off to a great start.

“I had what I weighed in by 11:30 this morning,” he said. “I caught two limits, and I actually shook off a few late because I didn’t want to waste anything. I thought I would catch 13 or 14 pounds; I had a good practice. I wasn’t getting a lot of bites, but the quality was there.”

Browne said most of his fish came on the tube – a Gambler 4-inch in black/neon. But the swimbait, a Gambler Big E-Z (white), tricked two of his bigger fish – one of which Browne shook off three days ago during practice. Oddly enough, it was a prespawn bass sitting in the exact spot (near a dock).

“That was weird; that fish basically didn’t move in three days. But I was happy to have her.”

Browne then reflected on how this tournament is shaping up.

“This is the way I like to fish – shallow dirty water. The shallower and dirtier the better.” 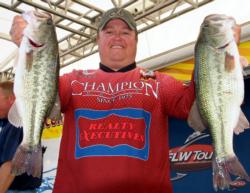 Rookie James Watson has had a rough start to his professional career – failing to cash checks at either Table Rock or Norman. But he’s come back with a vengeance at the Fort Loudoun-Tellico lakes. On day one, the Waynesville, Mo., pro sacked up 16 pounds, 8 ounces for fourth place.

“I had a pretty tough practice but it slowly got better,” said Watson, who fished Fort Loudoun Lake Wednesday. “Today they came scattered throughout and I caught everything that bit.”

Watson managed nine keepers and weighed all largemouths. Most of his fish are coming on a Carolina-rigged Luck E Strike USA curl-tail lizard. His kicker fell victim to a 1/2-ounce Luck E Strike jig with a Fighting Craw trailer.

“I think these are prespawn fish that are moving up. I think I can catch them tomorrow too, but I right now I’m just tickled to death to have what I have.” 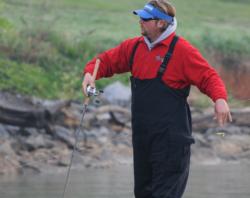 J.T. Kenney, known more for his prowess on the grassy Florida lakes, is slowly figuring out the smallmouth game. Today he caught five brown bass that weighed 16 pounds, 6 ounces. But more importantly, he thinks he has enough for two more days.

“I caught two on a Gambler Big E-Z swimbait and three sight-fishing with a drop-shot and either a Gambler Ace or a Gambler Little Otter.”

Kenney found some of these bedding bass while covering water with the swimbait.

“They wouldn’t eat it, but they’d come up and smack it and show themselves.”

Kenney is aiming for roughly 16 pounds a day. He found seven more fish on bed today, which makes him think it’s attainable.

“I think I can keep catching keeper smallmouths (size limit is 18 inches) – but I don’t know about 20 pounds or whatever.”

Rounding out the top 10 pros at the FLW Tour event on the Fort Loudoun-Tellico lakes after day one:

Three weeks ago co-angler Keith Honeycutt had surgery to repair his broken right hand. One would think that would put him on the sidelines for the third FLW Tour event of the season. But Honeycutt has 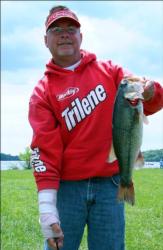 instead decided to adjust – using mostly spinning rods and moving the handle over to the right side of the reel.

“I’m dominantly right-handed,” he explained. “So I’ve had to learn to set the hook with my good hand and reel with my right. After today I really feel like I have a stronger hook set; it’s just a little awkward.”

“I really didn’t think 11 1/2 pounds would be leading it. I guess it was tougher than I thought.”

“There’s no doubt in my mind that the fish I caught were spawning. I couldn’t seem them, but we were sitting in like 2- to 4-feet of water. I’m extremely comfortable fishing with that shaky head. A lot of the success I’ve had over the years has come off of it. I bring it with me everywhere I go.”

If Honeycutt can keep up his strong pace he could have his second win of the 2010 tournament season. The first came at the American Fishing Series Texas Division event on Sam Rayburn.

Wilson fished with Alabama pro Kyle Mabrey on day one.

Hector Delagarza of Sunnyvale, Texas, is in third place with a five-bass limit weighing 10 pounds, 1 ounce. Delagarza is one of the more accomplished co-anglers and used to fish the American Fishing Series Texas Division as a professional.

Darrell Mitchell of Taneyville, Mo., is in fourth place with five bass weighing 9 pounds, 11 ounces. Mitchell finished 11th at the season-opening event on Table Rock – his home lake. Following him is Doug Caldwell of Kane, Pa., with three bass for 9 pounds, 3 ounces. Kane had one of the nicer largemouths in the Co-angler Division.

Rounding out the top 10 co-anglers at the FLW Tour event on the Fort Loudoun-Tellico lakes after day one:

Day two of the FLW Tour event on the Fort Loudoun-Tellico lakes will begin Thursday at 7 a.m. at the Tellico Recreational Area Ramp.