A look back at all the Cup holders, how they won 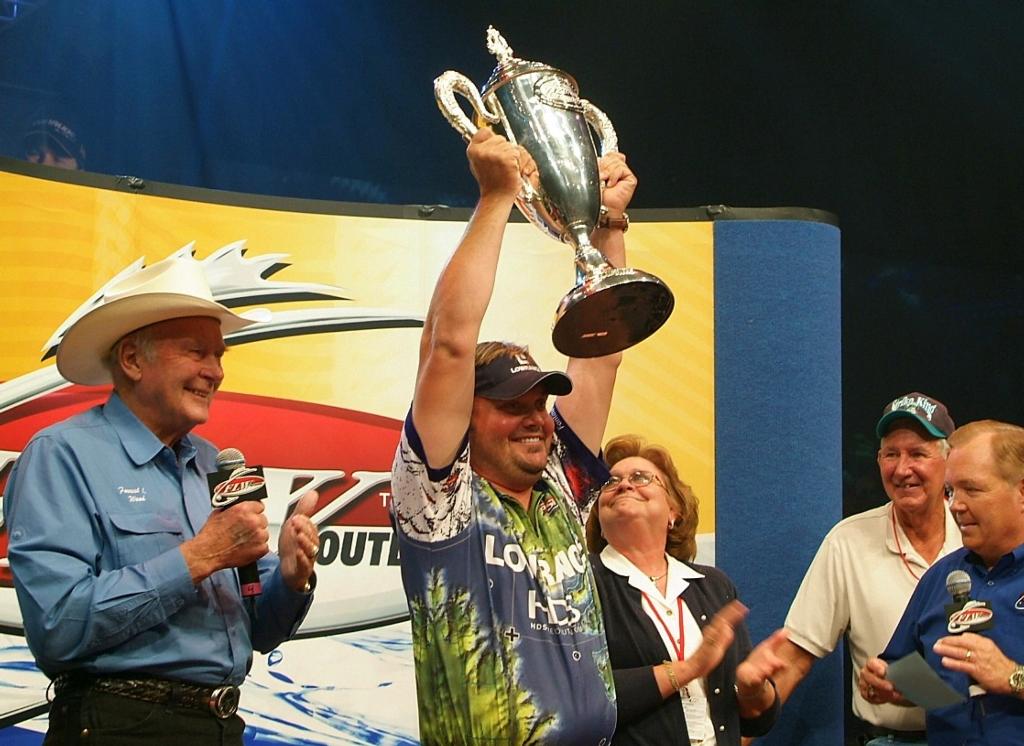 Editor’s note: If you like what you see here, be sure to check out “Game Notes,” a document devoted to the 2010 Forrest Wood Cup and past championships. It includes the following information: 1) a synopsis of the 2010 FLW Tour season; 2) a list of exclusive title holders; 3) a list of all-time money winners; 4) an Angler of the Year rundown; 5) a comprehensive list of activities surrounding and comprising the 2010 FWC; 6) and much more.

Keys to the Cup: Hackney looked for clear water that was less disturbed by the heavy pre-

tournament rains, and also ran a milk run of mayfly hatching areas. He downsized everything from his line to his lures, and even his rod. He used what he called “power finesse” lures such as small buzzbaits and spinnerbaits.

Keys to the Cup: Bennett turned his back on the tough deep bite that is usually good on Lake Murray in late summer. Instead, he focused on docks with patches of grass between them. Each day he fished new areas that conformed to the pattern. Most of his keepers came on a hollow frog, but he scratched out a few bass on a shaky-head worm when the topwater bite waned.

Keys to the Cup: While most of the field concentrated on fishing the sparse grass – a result of high water that spring – Suggs tempted suspended bass in deep-water treetops. He cast and “counted

down” a spinnerbait, swimbait or 10-inch worm and pulled it through the tops of flooded cedars. On the last day, when the wind made it too hard to control the lure and he couldn’t feel his way through the limbs, Suggs fished brush piles on deep structure with a large worm.

Keys to the Cup: Ehrler’s winning pattern of fishing finesse worms on light jigheads around shallow docks was not fancy, but it was effective. Though fishing with 8-pound-test fluorocarbon around the snaggy docks was nerve-wracking, Ehrler only broke off one fish during the tournament. He methodically picked apart a stretch of about 10 docks to capture the title.

Keys to the Cup: Most of the top finishers were throwing topwater lures, including Cochran, but his knowledge of the lake gave him the winning edge. Cochran took advantage of being the local favorite by catching bass on a buzzbait and a popper in a shallow area about 300 yards from his

house. The deciding factor proved to be a stretch of bank that Cochran saved for the last day. Not even touching it in practice, he knew he would be able to catch quality fish there to secure the win.

Keys to the Cup: The rookie dominated the event from start to finish and became the first angler to complete a four-day sweep in the head-to-head bracket-style tournament of that time. His finesse pattern of skipping docks with a 4-inch worm on a light jighead held up as a cold front and water fluctuations dissolved the other competitors’ game plans.

Keys to the Cup: Figuring out where the fish were positioned in the current and fishing a migration route was Dudley’s recipe for winning the event on the tidal fishery. No matter if it was low tide or high tide, a flat near the mouth of the Appomattox River was continually stocked and replenished

as the bass moved to and from the main river channel. Dudley threw a 1/2-ounce homemade spinnerbait with a 6-inch trailer, a combo he nicknamed the “rabbit dog spinnerbait,” to catch most of his fish.

Keys to the Cup: A late night of repainting crankbaits proved to be the difference between champion and runner-up. After Sappington realized that the chartreuse-colored crankbaits that produced in practice and previous days of the competition had lost their luster, he stayed up late before the final day and repainted them all a shad color. Sappington flipped to cypress trees and then moved to deeper water with the crankbaits as the day progressed. Bass liked the color change.

This event was cancelled due to Sept. 11.

Keys to the Cup: It took Hibdon just nine minutes to catch his limit on the final day. He used a Gambler Ninja Jig with a Guido’s Original crawfish trailer to catch his first five keepers, all under one log

at the mouth of a backwater area. Hibdon went on to catch three more keepers throughout the day to bolster his final-day haul of 10 pounds, 7 ounces.

Keys to the Cup: Fort Gibson and Grand Lake are separated by just a few miles and fish similarly. That was fortunate for Robertson, who lives near Grand Lake. The similarity with his home waters helped the pro adjust to the ebb and flow of fall fishing on Fort Gibson. Timing was critical, as Robertson hit feeding areas throughout the day, moving from one spot to another as the fish turned on and off.

Keys to the Cup: Hite knew he could win the tournament from a small area he found in practice — providing nobody else found it. Turns out Tommy Biffle had located the same area, but it still produced enough fish for Hite to win the championship and Biffle to earn the runnerup check. The winning spot was in Edick Lake – a small backwater area more than 57 miles from the launch site. Hite

and Biffle slugged it out over the four-day competition. Iin the end, Hite finished just 12 ounces ahead of Biffle. The South Carolina pro used a tube, frog and buzzbait to fish grass mats.

Keys to the Cup: Fritts admits his pattern was a simple one. With the exception of the last day, he caught nearly all of his fish working a soft-plastic worm through submerged wood cover – none of it was visible from the surface – in 7 or 8 feet of water. He did the same on the last day but eventually dropped back to about 15 feet of water where he caught some fish on a crankbait. The fish were

backing out deeper because the water was gradually dropping.

Keys to the Cup: Fishing was tough at the inaugural Forrest Wood Cup. Daniel found his fish along riprap on a point near a bridge with a Bagley’s Original DB2 with chartreuse sides, a black back and an orange belly. He stopped at the point sporadically on the first day, catching a keeper almost every stop. The second day Daniel repeated the pattern, but caught his best limit of the event with a spinnerbait. During the last two days, he camped on the point all day, rather than coming and going, to seal the victory.