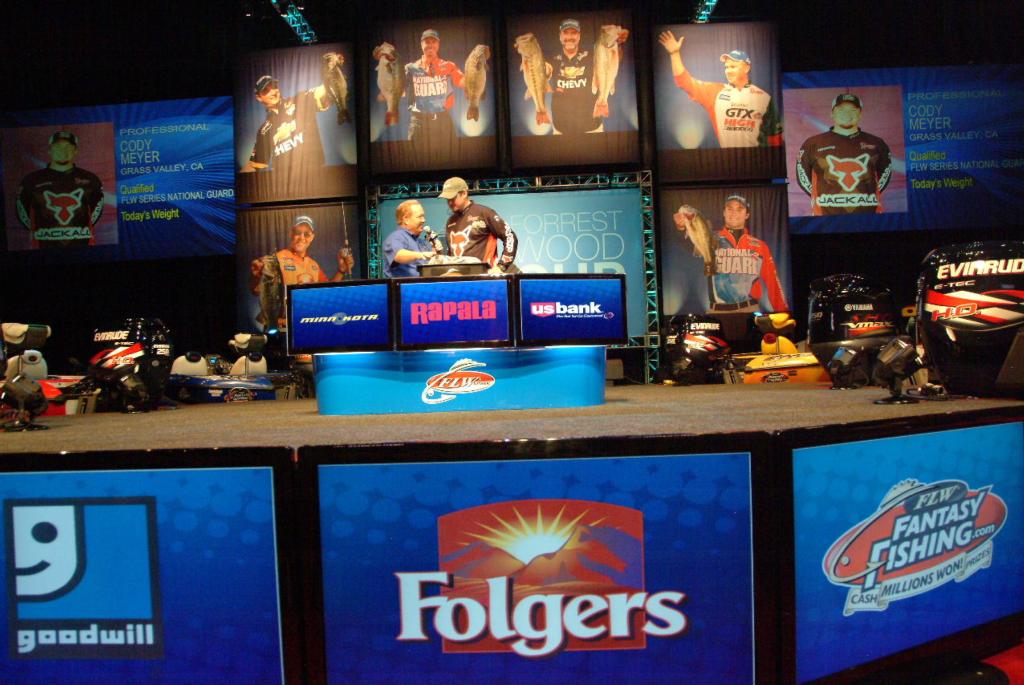 Mixed results for the Mann … Coming in the 2010 Forrest Wood Cup labeled as the pre-tournament favorite undoubtedly places a lot of pressure on an individual. And clearly that pressure was felt today by Tom Mann Jr. A resident of Buford, Ga., Mann is basically fishing on his home lake – which as anglers know can be both a blessing and a curse. Although Mann didn’t crash and burn, he didn’t exactly light the world on fire either. And he knew it. After spending months of intense preparation, it was clear at the end of the day he wasn’t entirely pleased with his 9-pound, 6-ounce catch and 21st-place finish at the end of today’s competition. “It was pitiful,” said Mann. “The day just didn’t go very good. I just can’t explain it. I realistically thought I could catch 12 pounds a day.” 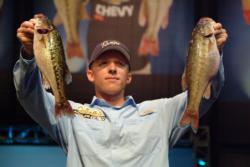 Hawk draws first blood … While all eyes were on the big-name pros and past Forrest Wood Cup winners during opening weigh-in, Kevin Hawk of Ramona, Calif., quietly grabbed the overall lead. Bolstered by a catch of 14 pounds, 12 ounces, Hawk – a soft-spoken western pro – now owns the day-one headlines. And if it was a surprise to most pundits to see Hawk on top of the leaderboard, it was equally surprising to Hawk as well. “I really wasn’t expecting to catch 14 pounds so I felt very fortunate to have weighed in what I did today. The key for me was fishing as many (different locations) as possible because that’s what it takes to get a good limit. I’m fishing a combination of fast and slow. And what I mean by that is that I move quickly from spot to spot but once you get to your location you have to fish slowly.” Whether Hawk maintains the overall lead from here on out remains to be seen. However, no matter what happens going forward, Hawk will always be able to say that he led one of the most prestigious bass-fishing tournaments for at least one day.

Anybody’s game … While that phrase is used far too often in bass-fishing tournaments, it is undoubtedly a true characterization with regard to the 2010 Forrest Wood Cup – at least so far. With day-one already in the books, a mere 2 pounds, 14 ounces separates the entire top-10 leaderboard. And with difficult fishing conditions abound and plenty of opportunities for anglers to either excel or stumble, it’s clear that the leaderboard will almost certainly undergo a major reshuffling before the 2010 Cup is in the books. 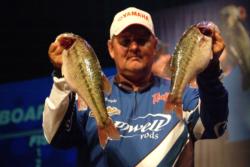 The Wright stuff … While the pro leaderboard featured a few surprises today, nobody should be surprised to see who finished atop of the Co-angler Division after the first day of competition on Lake Lanier. With seemingly relative ease, J.R. Wright of Truckee, Calif., recorded a tournament leading 12-pound, 5-ounce catch, a full 3 pounds more than his next closest competitor, to continue his torrid stretch of fishing prowess. To be sure, Wright’s track record is truly astonishing. Since beginning his fishing career with FLW Outdoors in 2006, Truckee has walked away with two titles (a 2009 FLW Series event on the Cal Delta and a 2008 American Fishing Series event at Lake Havasu) and 15 top-10 finishes in ONLY 38 events total. He has amassed nearly $100,000 in winnings, finished second in the FLW Series Western Division points race in 2008 and 2009 (and is currently in second place in 2010) and finished in the top 10 in the overall standings in the American Fishing Series Western Division from 2007-2009.

1: Number of anglers who qualified for this year’s Forrest Wood Cup and Bassmaster Classic (Steve Kennedy).

2-14: The total weight in pounds of ounces separating the top-10 pros after the first day of Cup competition on Lake Lanier.

3: Total number of women fishing in the Forrest Wood Cup (all as co-anglers).

6: Number of past Forrest Wood Cup champions who qualified for this year’s Cup. (Past champions who have a shot at repeating in 2010 include: George Cochran, Scott Suggs, Brent Ehrler, Luke Clausen, David Fritts and David Dudley).

216-13: Total weight in pounds and ounces of fish caught on day one by co-angler field.

537-7: Total weight in pounds and ounces of fish caught on day one by pro field. 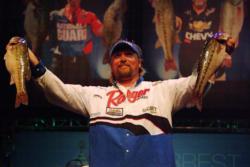 “It actually went the way I thought it would go and that doesn’t happen very often.” – FLW Tour pro J.T. Kenney who was more than pleased with his third-place finish at the end of today’s competition.

“Watching that video made me think about those 23 points more and more.” – FLW Tour pro and Forrest Wood Cup color commentator Jimmy Houston, after watching the video of past Forrest Wood Cup champions and lamenting about missing the championship cut by a few standings points.

“I thought the third time was a charm but today wasn’t charming.” – FLW Tour pro Greg Bohannan on zeroing on the opening day of Cup competition.

“At least I beat Tom (Mann Jr.) one day.” – FLW Tour pro Wesley Strader, finding another silver lining with regard to his 19th-place finish.

“It was a tough day out there. I expected to catch a lot more fish.” – BFL All-American champion Troy Morrow, who finished in 12th place despite being one of the big underdogs in the 2010 Cup.

“These spotted bass tough. I broke off two today and I don’t think it was because of the wood. I think it was just because they were so big.” – FLW Series pro Zack Thompson on what might have been. 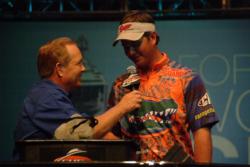 “I can still remember reading that a college (student) was going to get a chance to qualify for the Forrest Wood Cup. But I never dreamed that would be me.” – Florida Gator angler Jake Gipson who became the first college angler to fish in the Cup. Gipson qualified after winning the 2010 FLW College Fishing National Championship in Knoxville.

“It was tough out there today. During practice there were some days where I could see 15 to 17 pounds happening. But I saw a lot more days with zero happening. And today was one of those days.” – FLW Tour pro Scott Suggs after failing to bring a fish to the scales in today’s competition.

“I don’t know what happened out there today. They just jerked the rug out from under me.” – Forrest Wood Cup contender Robert Robinson trying to explain his 62nd-place finish in today’s competition.

“I had a good start. But it could have been a whole lot better. I was close to blowing this thing wide open today.” – FLW Tour pro David Dudley commenting on his 10th-place finish.

“It’s taken awhile but it’s pretty cool.” – FLW Tour pro Jim Moynagh on his guaranteed prospects of surpassing the $1 million mark in career earnings by the end of the 2010 Forrest Wood Cup regardless of outcome.