Mann rebounds, Meyer makes a name for himself and the Left Coast makes yet another run at a Cup title 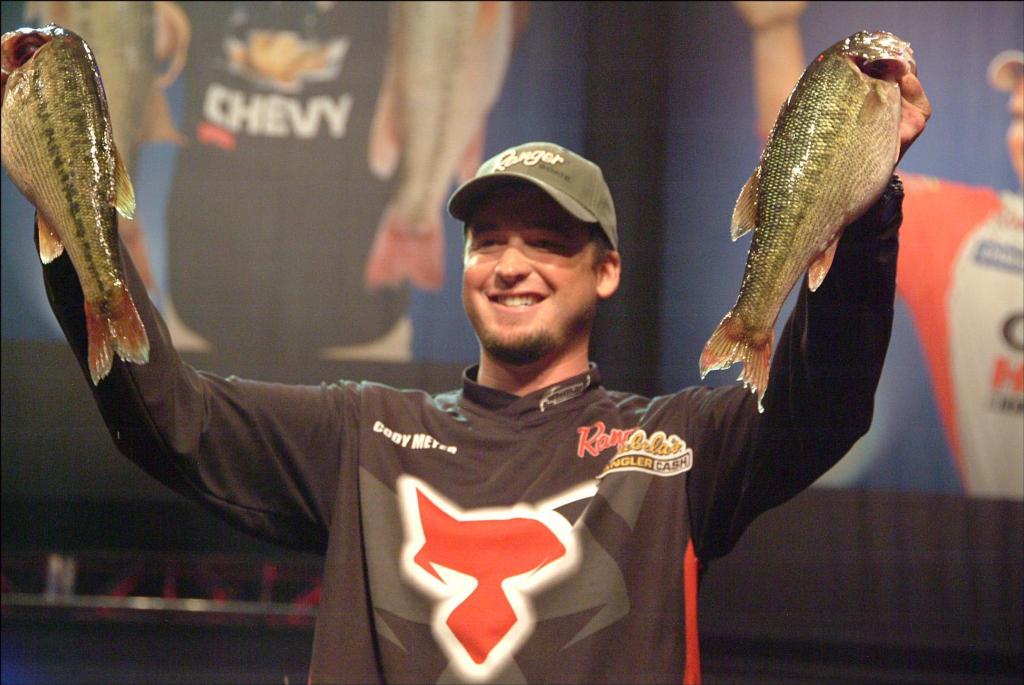 Something old, something new … By the end of day-two weigh-in, one of the youngest members of the FLW Tour, Cody Meyer of Grass Valley, Calif., found himself in first place overall with a total catch of 27 pounds, 6 ounces. Billed by many pros as the “next young gun to watch out for,” Meyer is certainly living up to the early buzz. However, right behind him in second place with a total catch of 26 pounds, 2 ounces was none other than “The General” himself, longtime pro and fishing legend Larry Nixon. The duo provided an interesting contrast in both age and style. However, despite leading the tournament, Meyer acknowledged that his success came with a healthy dose of panic. “It was a little tougher out there and I got pretty lucky today,” said Meyer. “I had two fish at 10 a.m. and caught my fifth fish at 2:45 p.m. so it was pretty scary. I’m just going to keep scrambling around and try to find some new water.” Meyer said that he relied on the drop-shot, a technique perfected on the West Coast, to land the majority of his catch. Meanwhile, Nixon, of Bee Branch, Ark., is trying to prove that the old guard can still compete with the younger generation and new breed of tech-savvy anglers. “I had a good day today,” said Nixon. “I just hope I can keep it up.”

Will the Left Coast prevail again? … In 2004, Luke Clausen, then of Spokane, Wash., took home the Forrest Wood Cup title. In 2005, long-time fishing veteran George Cochran of Hot Springs, Ark., won the Cup title. The next year, the West Coast prevailed again, when Brent Ehrler took home the top prize. In 2007, another Arkansas native Scott Suggs captured the Cup title, taking home the first $1 million payday in bass fishing history. In 2008, California native Michael Bennett reclaimed the title for the West Coast for the third time in five years. However, in 2009, the Cup once again made its way back east when Greg Hackney of Louisiana took home the Cup – providing a fairly significant statistical oddity. In the past six years, the Cup has oscillated between the southeast and West Coast exactly every year. Cut to 2010 where California native Cody Meyer is making a strong play to bring the title back to the West Coast once again. Throw in the fact that four West Coast anglers now sit in the top seven places overall (Meyer, Kevin Hawk (fifth), Brent Ehrler (sixth) and Ronald Hobbs, Jr. (seventh) and it’s looking more and more like the trend will continue for at least one more year. 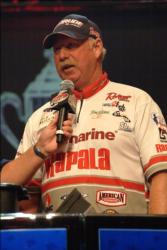 Mann regains his footing … After struggling a bit in yesterday’s competition and falling to 21st place overall, pre-tournament favorite Tom Mann, Jr., of Buford, Ga., appeared to finally right the ship. Bolstered by a 12-pound, 13-ounce catch in today’s competition, Mann is currently in 12th place overall and within striking distance of the leaders. “A lot of things went right today,” said Mann, who was clearly relieved by his performance in Friday’s competition. “I sure want to be (fishing) here on Sunday. I feel a lot better. At least now I have a chance (at the title). If I can get into the top six, I feel that I’ll have a really good shot.” Mann is definitely one angler to keep an eye on for the remainder of this event.

Spots or largemouth? … While the majority of the Cup field has been targeting spotted bass almost exclusively, a few savvy pros are finding it advantageous to zig while the rest of the field zags in an effort to capitalize on the largemouth bass bite. Today, both Ron Shuffield and Ronald Hobbs, Jr., took advantage of some key largemouth bass bites to climb the leaderboard. Currently Shuffield resides in 13th place while Hobbs vaulted up the standings to seventh place overall. “I pretty much have (largemouth bass) all to myself.” Time will tell if the strategy will pay off.

Wright stumbles … Although J.R. Wright of Truckee, Calif., appeared to be an unstoppable force after the first day of competition, he ran into some tough luck today, only managing to boat one keeper for 2 pounds, 8 ounces. Wright, who had maintained a significant 3-pound lead over his next closest competitor after yesterday’s competition, now resides in third place overall in the Co-angler Division, more than 3 pounds off the lead. However, Wright did find a silver lining in the day’s events. “I got to fish with Andy Morgan today and I’ve wanted to fish with him all year,” said Wright. “So it was worth it to catch that one fish.” Currently, Dearal Rodgers of Camden, S.C., owns the top spot in the Co-angler Division with a total catch of 18 pounds. 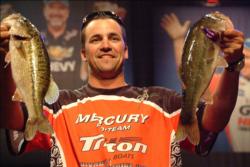 3: Number of California pros currently in the top six of the 2010 Forrest Wood Cup standings.

3: Number of anglers fishing in this week’s championship who have won both the Bassmaster Classic and the Forrest Wood Cup (Luke Clausen, George Cochran and David Fritts).

4: Number of ounces that kept Tom Monsoor of Lacrosse, Wisc., from making the top-30 pro cut. Monsoor finished the tournament in 31st place.

197-1: Total weight in pounds and ounces of fish caught on day two by co-angler field.

500-2: Total weight in pounds and ounces of fish caught on day two by pro field. 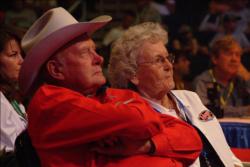 “It totally escaped me. I think I’m going to have to go back and re-learn a few things.” – Pro Mike Wurm lamenting the difficulties he had throughout the week on Lake Lanier.

“I room with Cody Meyer and I’d love to see him win this tournament. It wouldn’t be as special as me winning but it’d be really special.” – Forrest Wood Cup pro competitor Justin Lucas.

“I was in good shape but the river really fell apart for us last night.” – Forrest Wood Cup pro David Walker commenting on his dismal 3-pound, 10-ounce catch in today’s competition.

“I think this is going to be it.” – Forrest Wood Cup pro Greg Pugh responding to a question relating to the worst finish of his career in Cup competition.

“That’s terrible. Terrible. I feel like I owe Tom Mann Jr., an apology.” FLW Tour pro Dave Lefebre commenting on both his performance as well as his potentially ill-advised pre-tournament taunting of Tom Mann Jr.

“I went over 100 brush piles today and none of the fish were positioned like they were yesterday.” – FLW Tour pro J.T. Kenney describing how he fell from third place overall to 19th after today’s competition.

“I stunk this one up pretty good.” – Cup contender Robert Robinson, echoing the sentiments of many anglers who struggled on Lake Lanier today.

“It’s been a really cool experience just driving it around. It gets looks everywhere I go.” – University of Florida student Jake Gipson on what’s it’s like to drive around a custom wrapped boat and truck in Florida Gator colors that came as part of the prize package for winning the 2010 FLW College Fishing National Championship.

“I’m not here to make the cut. I’m here to win.” – FLW Tour pro David Fritts on his priorities this week. Unfortunately Fritts ultimately missed the cut by 15 ounces.