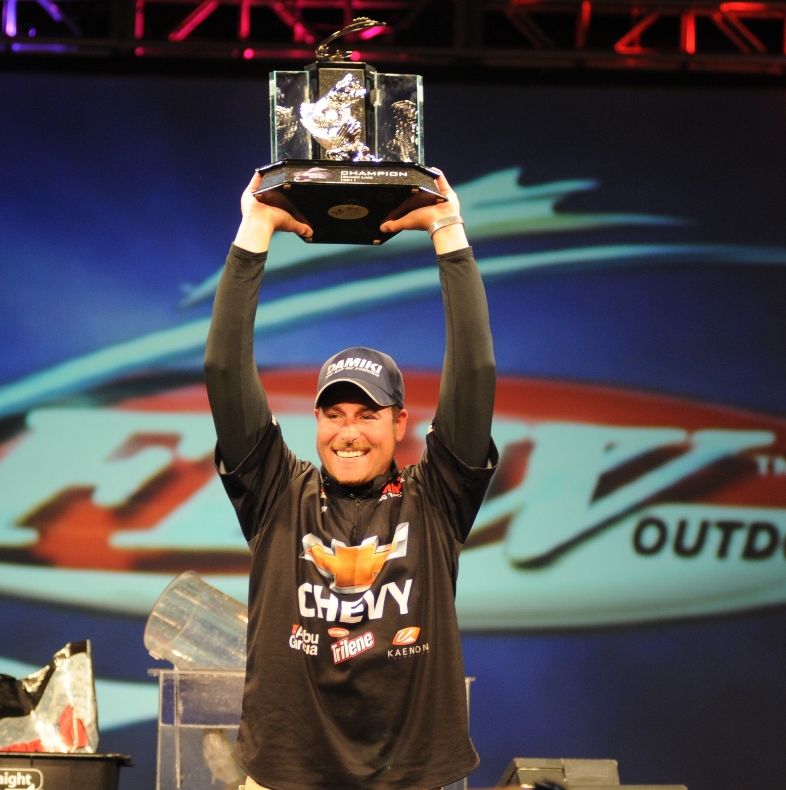 ROGERS, Ark. – The 2010 tournament season was a rollercoaster ride for Bryan Thrift. He claimed his first Walmart FLW Tour win on his home lake in front of family and friends. A few months later, he won the coveted Angler of the Year award. But Thrift also remembers 2010 for what he lost – his father, Tommy, to cancer. But 2011 couldn’t have started any better. Thrift and his wife, Allison, are proud parents to newborn baby Wylie Thomas. And at Wylie’s first tournament, his dad delivered another textbook thrashing.

Not too long ago, Thrift was known as a dock skipper and a bank burner. But as he ages, his angling arsenal continues to diversify. This week on Beaver Lake he demonstrated the ability to master cold water and make key adjustments in the tournament’s final hours.

On day one Thrift caught three quality keepers and then left his primary area. He was hoping to find a few kicker largemouths in Beaver’s muddy water, but he returned empty-handed.

“I thought after the first day I was done,” said the Shelby, N.C., native, who sat in 36th place. “I ran up the river and never got bit. Little did I know, where I left was where the big ones were at.” 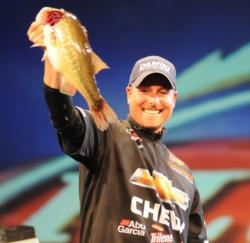 After a tip from friend and fellow North Carolina pro Matt Arey, Thrift put on a jerkbait clinic. Throwing to water waist deep, Thrift would work a Megabass Vision 110 as hard and fast as possible over rock piles and timber in the Rocky Branch area of the lake.

“Matt really showed me what I was doing wrong. Once I got the action right, I really figured it out. I ripped that thing until my arms got tired, and I then I’d rest and rip it some more. And the key for me was that 6-foot, 6-inch medium-heavy Damiki Dark Angel rod. It’s got backbone, but it’s also got a lot of tip, which is the exact action you want in a jerkbait-crankbait rod.”

While the Vision 110 (Pro Blue) was his primary lure, Thrift also weighed in a few keepers this week on a bluegill-colored Damiki DC-200 crankbait. Both were tied to 10-pound Berkley Trilene 100% fluorocarbon.

While Thrift stunned the crowd Saturday with a 20-pound, 8-ounce stringer, Sunday was much more stressful.

“I caught a 4-pounder in the first 20 minutes, and then it really got tough. At about 1 p.m. I decided to abandon my shallow-water program and fish deep cedar trees. At the time I only had three fish. Instead of working the bait fast, I’d dead-stick it and let it fall for 20 or 30 seconds, all the way down.”

That late-game adjustment made all the difference as Thrift filled out his limit. But he didn’t seal the deal until the closing moments.

“With about 10 minutes left in the day I pulled into Prairie Creek, about half a mile from the takeoff, and 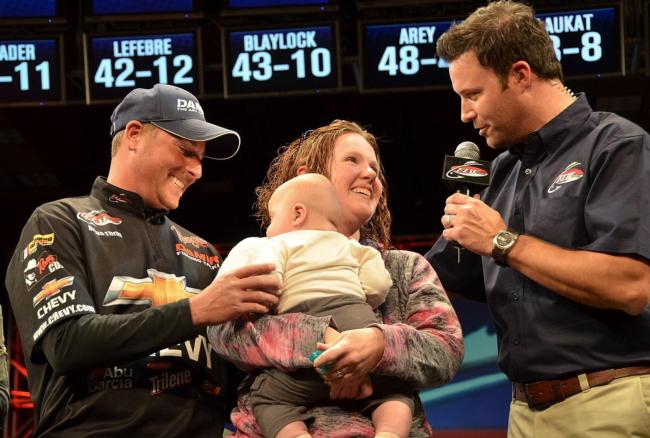 threw my jerkbait beside a cedar tree. It’s sinking down through there, and my line jumps and I catch a 4-pounder right before weigh-in. Hands down, that was the winning fish.”

The Chevy pro then reflected on his latest milestone.

“I don’t want to slow down,” said Thrift, who has posted seven top-10 finishes and two wins in the last eight events dating back to the 2009 Forrest Wood Cup. “I want to catch them everywhere I go. That’s my goal.”

He said this win might mean more to him than last year’s triumph at Norman, his first Tour win.

“I’d have to say it is, even though this one wasn’t at home with a bunch of friends and family around. But it’s my first win with my new son, Wylie. It was his first tournament, and he got to see me win.”

For a total weight of 54 pounds, 8 ounces, Thrift earned $125,000. He also set the record Saturday for heaviest single-day catch on Beaver Lake.

At the day-three weigh-in, veteran pro Stacey King made a prediction that not bringing in a fifth fish 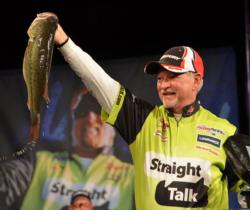 would come back to haunt him. At the time, King was more than 5 pounds behind Ron Shuffield and Thrift. But true to form, King made a huge rally, only to come up 2 pounds, 2 ounces short – approximately the size of a decent Beaver Lake keeper.

“It cost me the tournament, there’s no doubt about it,” said the Reeds Spring, Mo., pro. “I had a great week; I hate that I didn’t win, but I’m not upset.”

For most of the week, King used a Storm Wiggle Wart and a Megabass Vision 110. But being the wily veteran that he is, King had an inkling it was time to bail on the jerkbait.

“I wasn’t real confident getting bit in the calm, clear conditions. So I switched to a Cordell Super Shad tailspinner, and it worked great. When it’s still and bright in the Ozarks, it can be a great little bait. But that lure is probably 25 or 30 years old; they no longer make it.”

King would cast the tailspinner out into trees 20 to 40 feet deep and pump it off the bottom. On day four he weighed in three largemouths and smallmouths for a total of 16 pounds, 12 ounces. Of the five he weighed, four came on the tailspinner, the other on the Wiggle Wart. He also culled eight or 10 keeper spotted bass on the tailspinner.

For finishing in second place with 52 pounds, 6 ounces, he earned $35,000. In approximately two months, the Tour heads to Table Rock, King’s home lake.

After catching 16-4 and 18-10 on days two and three, EverStart pro Ron Shuffield fell back to earth 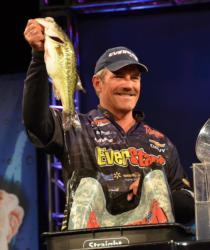 Sunday, catching three bass weighing 7 pounds, 14 ounces. Shuffield knew the high-pressure system, complete with bluebird skies and calm winds, would hurt his jerkbait bite, but he stuck to his guns.

“What really killed me was the lack of wind, and I knew it would,” said the Bismarck, Ark., native.

Shuffield fished Indian Creek, near the Starkey Marina and close to the dam in an effort to fish new water every day. Above all, he tried to fish cover that wasn’t obvious and hadn’t been pounded on during the four-day tournament. Some of his best spots had isolated rock formations, located halfway to the backs of the coves. Shuffield explained that the bass are trying to move into their spawn areas, so they’re staging and suspended over water 20 to 35 feet deep.

All week long, he kept three rods ready on the deck. One had a Storm Wiggle Wart tied on, and the other two featured Megabass Vision 110 jerkbaits. All three were tied to either 8- or 10-pound Berkley 100% fluorocarbon.

“The jerkbait accounted for a little more than half of my fish, but the occasional Wart fish seemed to be the bigger ones. Today I didn’t get a bite on the Wart; all three came on the Vision 110.” 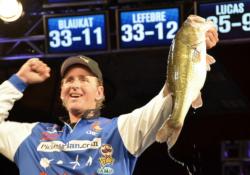 Pickens Plan pro Randy Blaukat improved his weight every single day of the four-day tournament. On day one he caught 9-5, and on day two he registered 11-13. Yesterday he caught 12-9, and today he finished with 14 pounds, 13 ounces for a total of 48-8. While it looks great on paper, Blaukat struggled for much of the day Sunday.

With only two fish at noon, he left his spot near Hickory Creek and returned to Prairie Creek. But instead of targeting the same fish he did the first three days, he backed off and fished deeper.

Blaukat used two baits all week – a Megabass Vision 110 Silent Riser and a Megabass Live-X Revenge, which has a longer bill and thus dives deeper. Both were tied on to 6-pound Seaguar fluorocarbon.

His day-four limit consisted of four largemouths and one spotted bass. For fourth place, Blaukat earned $25,000.

If the $125,000 purse was awarded to the angler who caught the most keepers during the week, then 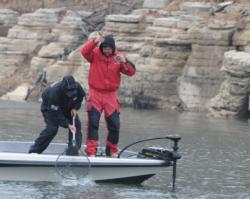 Arey would be heading back to Shelby, N.C., with a much larger bank account. During the first three days of competition, Arey was averaging approximately 30 keepers per day – absolutely unheard of on Beaver Lake. His bite slowed considerably Sunday, but he capitalized on the six bites he received and finished the day with 12 pounds, 10 ounces. Arey’s four-day cumulative weight registered 48 pounds, 4 ounces, good enough for fifth place and $20,000.

“I caught every fish this week throwing a Megabass Vision 110 on 8-pound P-Line fluorocarbon,” he said. “I was fishing mostly in the back two-thirds of the Blackburn arm. I would put my boat in about 20 to 35 feet of water, and the fish were positioned in 7 to 18 feet.”

Arey used an ultrafast motion with his jerkbait to trigger reactions strikes. And after day one, he told his good friend Thrift about it.

“You can’t give a machine extra oil. Then it was game over.”

Arey also finished fifth at the 2008 event on Beaver. That tournament saw vastly different conditions as the water was extremely high and warm.

Rounding out the top 10 pros at the FLW Tour event on Beaver Lake:

The next FLW Tour event is slated for Lake Hartwell in Greenville, S.C., March 24-27, the second of six Majors.