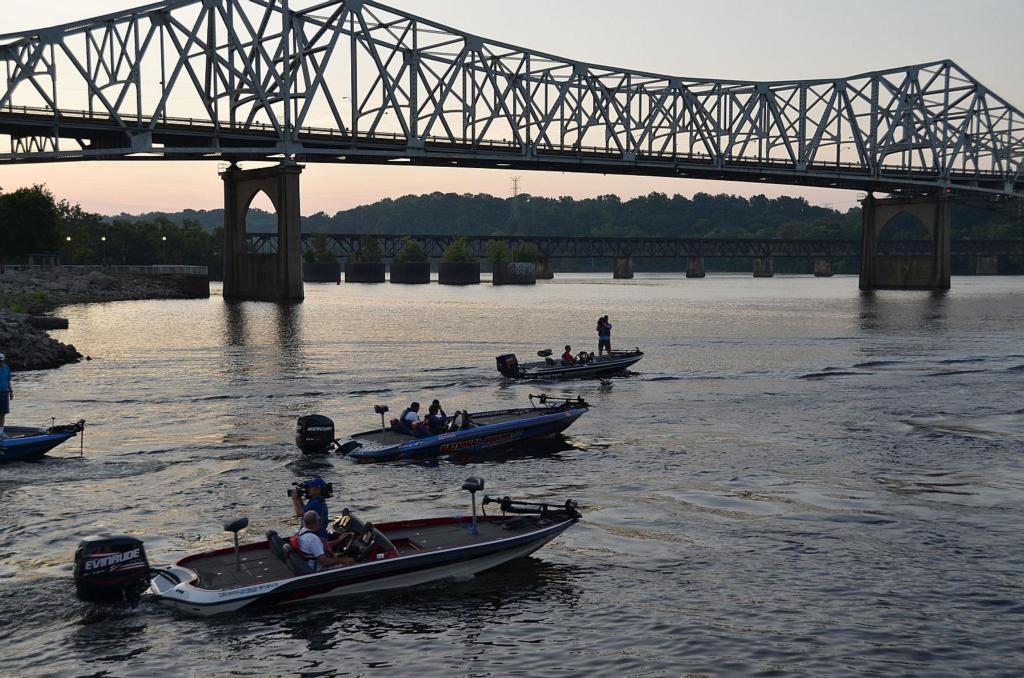 FLORENCE, Ala. – With another day of balmy temperatures, low winds and a slow bass bite in store for the field, the top-20 FLW Tour pros and co-anglers who survived Friday’s cut can now start focusing in earnest on the task at hand – procuring a tournament title.

However, as usual, it won’t be easy. With tough competition abound, local anglers hitting Pickwick Lake in droves and not much current to speak of, hauling in competitive sacks of fish during today’s competition could be as difficult as it has been all week.

As a result, some pros area rethinking their strategy while trying to remain as patient as possible on the water as they search for schooling bass adhering to deep ledges throughout the lake.

“I just set up on one spot over the last two days just waiting for them to bite,” said FLW Tour pro Jason Christie, who currently sits in 10th place overall. “But today I’m going to run to some more stuff. I’m going to do a lot more idling trying to find a new school of fish.”

“When you find a new school of fish it doesn’t take very long to catch 20 pounds,” Christie continued. “Yesterday was painfully slow fishing and I had a hard time getting those fish to bite. If I made a cast it would last two minutes which is absolutely against my philosophy of fishing. But here, you’ve got to do what you’ve got to do.”

Christie, who entered the Pickwick event ranked fifth overall in the angler of the year standings, said that the mid-summer bite on Pickwick Lake is notoriously slow and that it takes a tremendous amount of patience and finesse in order to compel the fish to start biting.

“The fish aren’t aggressive and they really don’t want to bite right now,” he said. “Yesterday, the big school of fish I was on never moved up in the water column where they’re a lot easier to catch. But if you see those fish starting to move up, you know they’re ready to start feeding.”

Although Christie has some real ground to make up if he’s to make a legit title run, he believes he still has a realistic shot at the title.

“I’m 6 or 7 pounds off the lead right now,” he said. “If there was only one day of fishing left, I’d be worried. But with two days left, I can make up (that deficit). It’s definitely doable.”

Currently, the entire pro field is trying to chase down Mark Rose of Marion, Ark., who boasts a two-day total of 42 pounds, 12 ounces.

Angler of the Year race at a glance 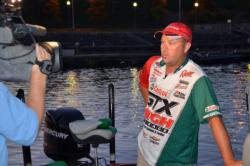 While six competitors entered the Pickwick Lake contest with a realistic chance of capturing the 2011 FLW Tour Angler of the Year title, the race has now boiled down to a duel between David Dudley of Lynchburg, Va., and Brent Ehrler of Redlands, Calif. Although Ehrler currently sits in sixth place overall at the Pickwick event while Dudley stands in eighth place, Dudley held a 16-point lead in the overall year-end standings so he has some cushion to work with over the final two days. As such, Dudley needs only a top-16 finish to claim the crown. However, if Ehrler finishes in the top four after Sunday’s final weigh-in and Dudley falls somewhere between 16th and 20th in the standings, Ehrler could walk away with the title.

With the AOY title carrying with it $100,000 in prize money and another $125,000 up for grabs with respect to the Pickwick Lake title, there is clearly a lot at stake for the remaining pro field over the next two days of competition.

Co-angler title and Cup berths up for grabs

While the pros will be jockey for position to see who can survive today’s top-10 cut, co-anglers are fishing their final day of competition.

Currently, Clent Davis of Montevallo, Ala., is in first place with a total catch of 35 pounds, 14 ounces. But Dan Thill of Lacrosse, Wisc., is right on his heels with 33 pounds, 8 ounces.

In addition to the co-angler competition, today’s tournament action will go a long way to deciding who receives the final 30 berths in this year’s Forrest Wood Cup. To gain automatic entry into the main event, anglers and co-anglers need to finish in the top 30 in the year-end standings. However, that being said, there is some wiggle room. If any of the top 30 pros or co-anglers has previously qualified for the Cup through another circuit, the 31st ranked angler/co-angler will be invited as well. If two anglers in the top 30 have already qualified, then the 32nd ranked angler will receive a berth … so on. 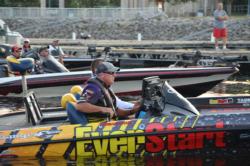 During FLW Tour competition, pros supply the boats, fish from the front deck against other pros and control boat movement. Co-anglers fish from the back deck and compete against other co-anglers. Anglers are permitted to weigh in their best five bass each day. Every angler who receives weight credit in a tournament earns points that determine angler standings.

Want to watch the weigh in live but can’t make it in person? Then tune into FLW Live on FLWOutdoors.com shortly before 3:30 p.m. Central Time to watch live streaming video and audio of today’s opening-round weigh in.

Fans will be treated to the FLW Outdoors Expo at Walmart on Saturday and Sunday from noon to 4 p.m. prior to the final weigh-ins. The first 300 kids 14 and under on Sunday will receive a free rod and reel combo compliments of KIX 96 FM. The Expo includes Ranger boat simulators, the opportunity to interact with professional anglers, enjoy interactive games, activities and giveaways provided by sponsors, and fans can learn more about the sport of fishing and other outdoor activities. All activities are free and open to the public.

Coverage of the Pickwick Lake tournament will be broadcast in high-definition (HD) on VERSUS. “FLW Outdoors” will air Sept. 11 from 1 to 2 p.m. ET. “FLW Outdoors,” hosted by Jason Harper, is broadcast to more than 500 million households worldwide. 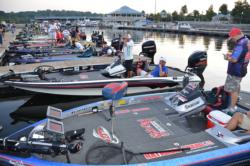 Wind: From the south-southwest at 4 to 7 mph