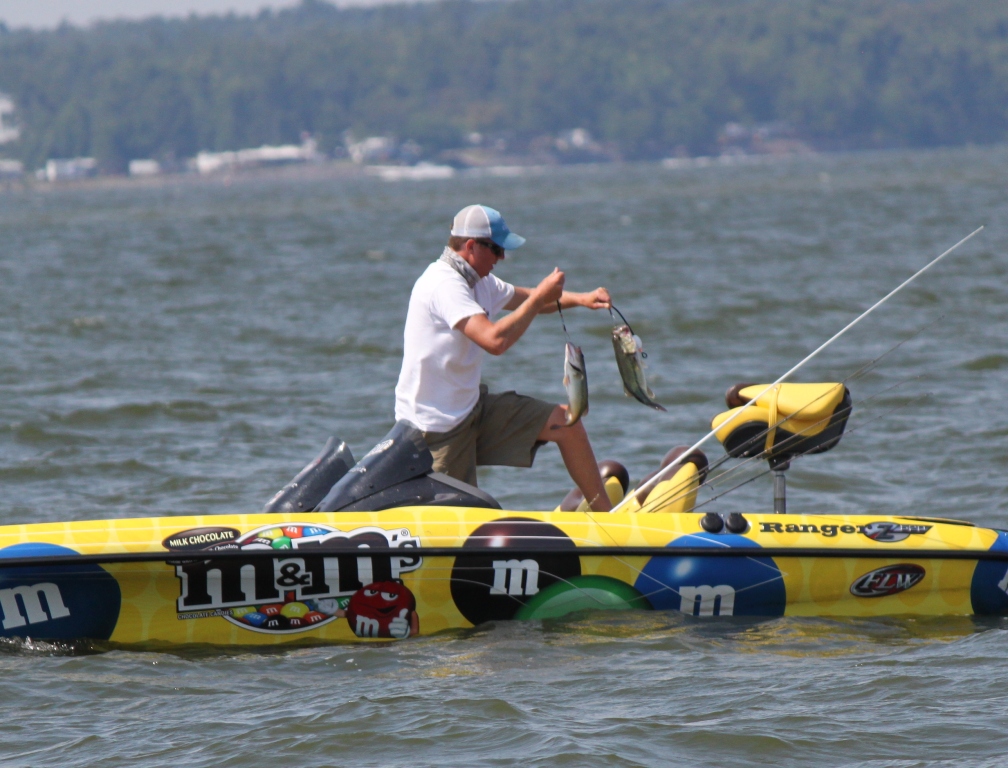 MURRAY, Ky. – Casey Martin of New Market, Ala., dominated the Co-angler Division of this week’s Walmart FLW Tour event on Kentucky Lake, leading the event wire-to-wire and claiming his third FLW Tour victory from the back of the boat.

Martin caught what was until today the tournament’s heaviest stringer, a 22-pound, 12-ounce limit, on day one and followed that up on day two with another 14 pounds, 13 ounces that gave him a 7-pound lead heading into the final day. That lead turned out to be insurmountable, as Martin caught another limit that weighed 13 pounds, 13 ounces for a three-day total of 51-6. That afforded him an 8-pound, 8-ounce margin of victory and earned him $25,000.

This was hardly the first time Martin has been the last man standing, as he claimed two Tour victories in 2011, one on his home lake of Guntersville and the other on Lake Champlain. Incidentally, the 2012 FLW Tour season will wrap up next month on Champlain, but his co-angler competitors can breathe a sigh of relief – he will miss that event to attend his brother’s wedding.

Martin caught all his bass today on a ¾-ounce Omega Derek Remitz Ozark Special football jig as well as a Strike King 6XD. That’s a change from the first two days, when he relied on a Picasso Finesse School-E-Rig, which he described as a small version of an Alabama rig. He fished today from the back of M&Ms pro Jim Moynagh’s boat.

Despite his dominance, Martin wasn’t completely convinced he had victory in the bag today.

“I thought I had about 12 pounds, and I figured someone would catch 20,” he said. “It was nice having a big lead, but it was tough today. The wind was blowing. The fish that Jim had found wouldn’t bite anything but a jig.”

Though Martin calls Guntersville home, he had plenty of compliments for Kentucky Lake.

“This is probably the best fishery in the south/southeast as far as the number of fish out there,” he said. “It was unbelievable during practice. Guntersville’s good, but it doesn’t have the numbers.”

Those Kentucky Lake bass handed Martin yet another fat check and something maybe even more valuable – confidence.

Smith thanks Hollowell for second-place finish 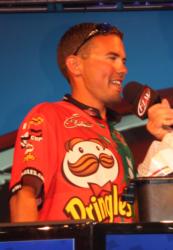 In the runner-up spot is co-angler Terrance Smith of Fishers, Ind., who brought in 42 pounds, 14 ounces of bass over three days, a catch that earned him $7,134. His best day was the first day, when he caught 15-11, but he remained steady, catching 14-14 the next day and 12-5 today. He is another student of pro Todd Hollowell, also from Fishers, Ind., who is currently in 10th on the pro side.

“A 7-pound deficit is tough to come back from, but I’m blessed with what I got and with what Todd taught me,” Smith said. “If you want to learn, that’s the guy to learn from.”

Smith was paired with Straight Talk pro J.T. Kenney today, and the two fished ledges all day long. He gives Kenney credit as well for his solid finish.

“J.T. is one of the nicest guys out there, and he left a lot of room for me to fish,” Smith said.

He caught his bass today on a 10 1/2-inch worm from River Rat Tackle. 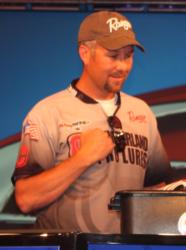 In third place on the co-angler side is Brad Roberts of Faubush, Ky., with a three-day total catch of 42 pounds, 2 ounces. He too had his best day Thursday, bringing in an impressive 17 pounds, 2 ounces, and he brought in 12-7 yesterday to make the cut. Today he weighed in a limit worth 12-9 to earn $4,750 as the third-place co-angler.

“Today we made a long run to the Paris (Tennessee) area,” said Roberts, who was fishing with pro Kyle Mabrey. “The fish were biting – we were doubling up the first hour and a half. It was fast and furious.”

Mabrey caught a limit within 30 minutes throwing whatever he felt like trying.

“They were biting everything – big worms, big jigs, swimbaits,” he said. “About 12 o’clock we moved to one more spot, and that wrapped up our day.”

Roberts, who won the co-angler title at the 2009 Forrest Wood Cup, lost a fish today that kept him from finishing second.

“I knew going out 7 pounds behind that I was probably fishing for second,” he said. “I thought I could, but I lost a 4 1/2-pounder early in the day.”

Helton, Taylor round out top five 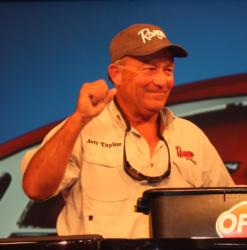 In fourth is Mike Helton of Jeffersonville, Ind., with a three-day catch of 41 pounds, 9 ounces. He fished today with Off! pro Terry Bolton, who wound up in 11th.

“He got me around some fish, and I managed to catch them,” Helton said. “I kind of just junk-fished them all week.”

Behind him in fifth is Jeff Taylor of Olmstead, Ky., with a three-day catch of 40 pounds, 9 ounces. He fished today with current Angler of the Year points leader David Dudley.

“I fished behind the No. 1 angler today, and it was a blast,” Taylor said. “The wind was blowing just right, and it gave me an opportunity to get what I got.”

Rounding out the top 10 co-angler finishers: