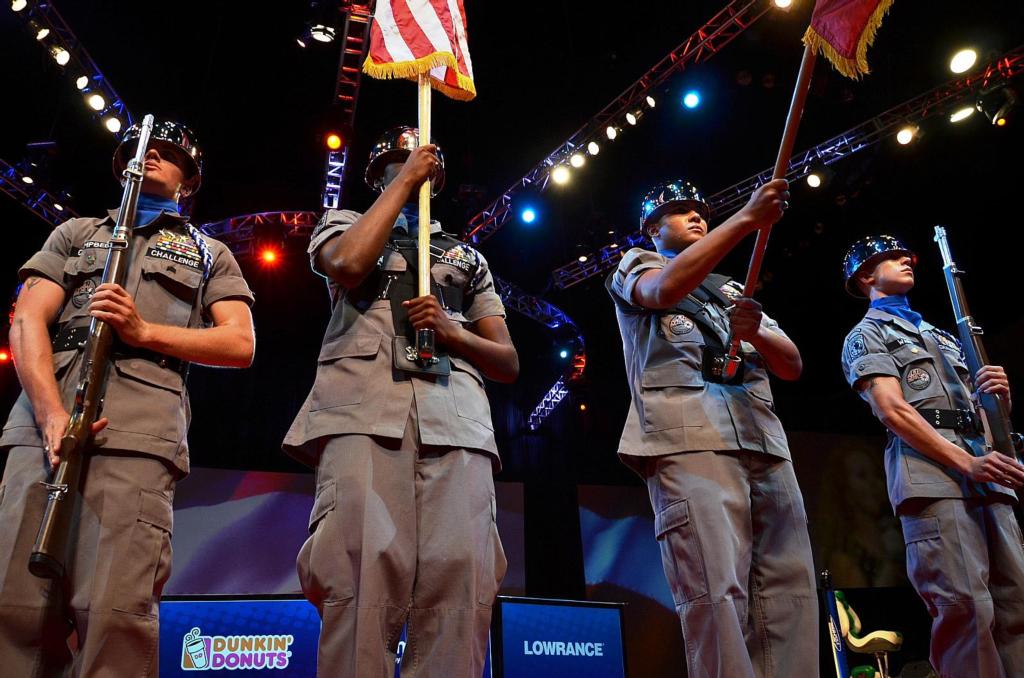 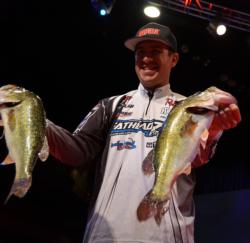 Wheeler blows away the field … With six returning Forrest Wood Cup champions, multiple FLW Tour Angler of the Year winners and a lethal group of veteran pros comprising the 46-member field, the day-one leader at the 2012 Forrest Wood Cup turned out to be none other than a 21-year-old rookie upstart named Jacob Wheeler. As the 2011 BFL All-American champion, Wheeler participated as an FLW Tour pro for the very first time this season, finishing 30th overall in the point’s standings while mounting a significant challenge for rookie of the year honors. While Wheeler’s rookie season was one of the truly feel-good stories of the 2012 FLW Tour campaign, few could have predicted that he would be challenging for the Forrest Wood Cup title on the very first day of competition – but that’s exactly what he did. After turning in an eye-popping 21-pound, 15-ounce sack, a full 5 pounds, 6 ounces greater than his next closest competitor, Wheeler is now the man, or more accurately the young man, to beat. “It was just one of those days you live for,” said Wheeler, flashing his patented ear-to-ear grin. “To have that type of day on the first day of the Forrest Wood Cup is unbelievable. There is no way I expected to catch 21 pounds, but everything just went my way today. Every place I went to, it seemed like there was a big one there.” However, despite his youthful exuberance, Wheeler said he is under no illusion that the title is wrapped up. “This is only the first quarter and you’ve got to get to the fourth quarter to win this game. I’m just going to go out there and go fishing. Tomorrow there is going to be a lot of hype, but you can’t get caught up with that. You have to focus on the prize.” And now the bass-fishing world gets to refocus as well – on a young man named Jacob Wheeler.

Battered, bruised and bitten … While it was a difficult day of fishing for many pros during the opening round of Cup competition (overcast skies, rain, lightning and a fickle bass bite), two anglers had to overcome some significant physical limitations as well. For starters, National Guard pro Brent Ehrler was reportedly still suffering the effects of a devastating car accident he had been involved in on July 16. Although he turned in a yeoman-like performance in today’s competition, finishing the day in 16th place overall, it was clear that he wasn’t 100 percent himself. Then there was Rayovac pro Jason Christie. Christie, like Ehrler, was considered one of the frontrunners to contend for a title at this event. But an extremely unfortunately incident involving a rain suit, a spider and a trip to the hospital is making that title quest a lot more difficult for the Oklahoma native. “Evidently I was bitten by a spider while I was at home on Thursday,” said Christie. “I remember it now. I was trying on a new rain suit and when I put it on I was bitten by either a black widow or a brown recluse – I’m not sure which one. On Friday while driving here I started to feel the effects. On Saturday, while I was at Walmart, my knee really began to swell. And by Sunday, I had one skinny leg and one fat leg. Then I spent most of Tuesday in the emergency room on an IV. It’s not an excuse, but it’s been pretty hard for me to stay focused. When I stand, my leg still tends to swell. I’m also on so much medicine that my body doesn’t feel good. I feel good mentally but physically I’m kind of in rough shape right now.” To his credit, Christie jumped into his boat this morning despite the pain and swelling and still turned in a 38th-place performance. 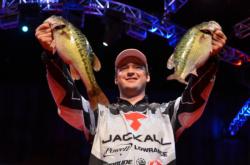 My name is Cody … Pre-tournament favorite Cody Meyer of Auburn, Calif., and Cody Bird of Granbury, Fla., both turned in remarkable performances in today’s opening round of Forrest Wood Cup action. In fact, their 14-pound-plus stringers were good enough for third and fifth-place respectively. “I love summertime fishing,” said Meyer, who has already logged third-, second- and seventh-place finishes in his last three Forrest Wood Cups, an outstanding accomplishment by any measure. “I like to fish light line and I like to fish the drop-shot and that has worked out really well for me over the past couple of years.” As for Bird, he said his previous experience on Lake Lanier has helped him out as well. “I’ve been here a few times,” said Bird. “I actually led a big tournament here not too long ago but fell off at the end. Hopefully, that won’t happen this year. Basically, I’m just junk fishing and I’m really mixing it up out there.” 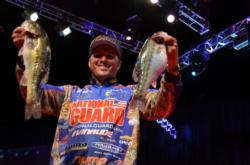 Martin lurking … The defending 2011 Forrest Wood Cup champion made sure that he didn’t repeat the same mistakes he made the last time the year-end championship was held on Lake Lanier. During that fateful event in 2010, Martin turned in an extremely disappointing 77th place performance. However, after the first day of competition in 2012, Martin now sits in sixth place overall with a realistic chance of making history as the first angler to ever win two Forrest Wood Cup titles. “It was a true blessing today,” said the National Guard pro who hails from Clewiston, Fla. “This lake didn’t treat me so well in 2010. But I caught some nice fish and that’s what it’s going to take to win this tournament. Two years ago I was on fish, but I couldn’t figure out how to make the fish bite. But I really prepared for this tournament. And my preparation really started right after the 2010 Cup.” 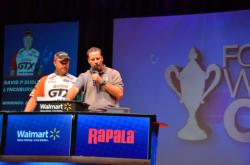 AOY dance fever … While reigning 2012 FLW Tour Angler of Year David Dudley is known for many things – his nearly unparalleled angling prowess, his routinely blunt assessments of the fishing industry, his largely unmatched competitive nature and his quirky quotations – one thing he hadn’t been known for was his dancing ability … that was until today. Although most pros opted to take the stage to a variety of country music, heavy metal and rock and roll anthems, Dudley decided to enter onstage to the much beloved and equally maligned “chicken dance” song. As Dudley slowly made his way to the weigh-in podium, with the chicken dance song cranking in the background, the Virginia native and 2003 Forrest Wood Cup winner broke out into a series of wedding-day chicken dance moves that had the crowd rolling in laughter. It was one of the lighter moments of the weigh-in to be sure, but also undoubtedly one of the more memorable entrances – fortunately or unfortunately – of any Forrest Wood Cup in recent memory. 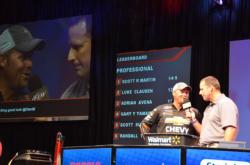 5-6: The total weight in pounds of ounces separating first-place pro Jacob Wheeler from his next closest competitor (Scott Canterbury) after the first day of Forrest Wood Cup competition.

6: Total number of stringers recorded over 14 pounds during the first day of 2012 Forrest Wood Cup competition on Lake Lanier.

195-1: Total weight in pounds and ounces of fish caught on day one by co-angler field.

470-14: Total weight in pounds and ounces of fish caught on day one by pro field.

“The pressure is on. But it’s a very fair lake. This lake gives you a lot of opportunities to show your strengths.” – Fishing icon and Forrest Wood Cup host Hank Parker extolling the virtues of Lake Lanier.

“My fish just disappeared on me. This place is just humbling. I was trying to fish shallow but I’m not sure the shallow bite is going to hold up. It didn’t today.” – Reigning TBF National Champion Gilbert Gagner on his tough day on Lake Lanier.

“Man, I don’t even want to talk about it.” – Kellogg’s pro Dave Lefebre on his early morning struggles which reportedly cost him a 15-pound bag in today’s competition.

“Standing back there at the tank looking at those (veteran pros) … I was just shaking.” – 2012 BFL All-American winner Brian Maloney on the magnitude of fishing against some of the best anglers in the world on one of the biggest stages of his career. 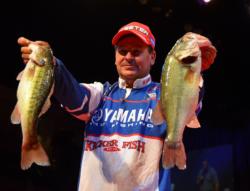 “It’s an awesome experience. This is a dream come true. I couldn’t be more excited to be here.” – 2012 FLW College Fishing National Champion Ryan Patterson on his experience at the Cup so far.

“I had an atrocious day. I can get them to bite, but getting them in the boat is a different story,” – Koby Kreiger.

“That’s not what I ordered.”- Than Le jokingly complaining about getting the wrong song choice, Twist and Shout, to accompany his walk to the weigh-in podium.

“I have about 213 or 214, but who’s counting?” – Co-angler Doug Caldwell jokingly acknowledging the total number of FLW events he’s fished in his long and storied co-angler career.

“I’m speechless. I can’t even comprehend it. It’s so awesome.” – Day-one pro leader Jacob Wheeler on his remarkable day of fishing.

“It was a fun day. I’m doing exactly what I like to do. I’m not sitting there staring at my depth-finder all day. I like casting.” – Dion Hibdon explaining that despite the relative success of the tedious drop-shot technique, it’s not in his DNA to fish that way.

“I was shocked by the weights today,” National Guard pro Brent Ehrler, who argued earlier in the morning that 12 pounds a day would most likely be enough to net a Cup title in 2012.