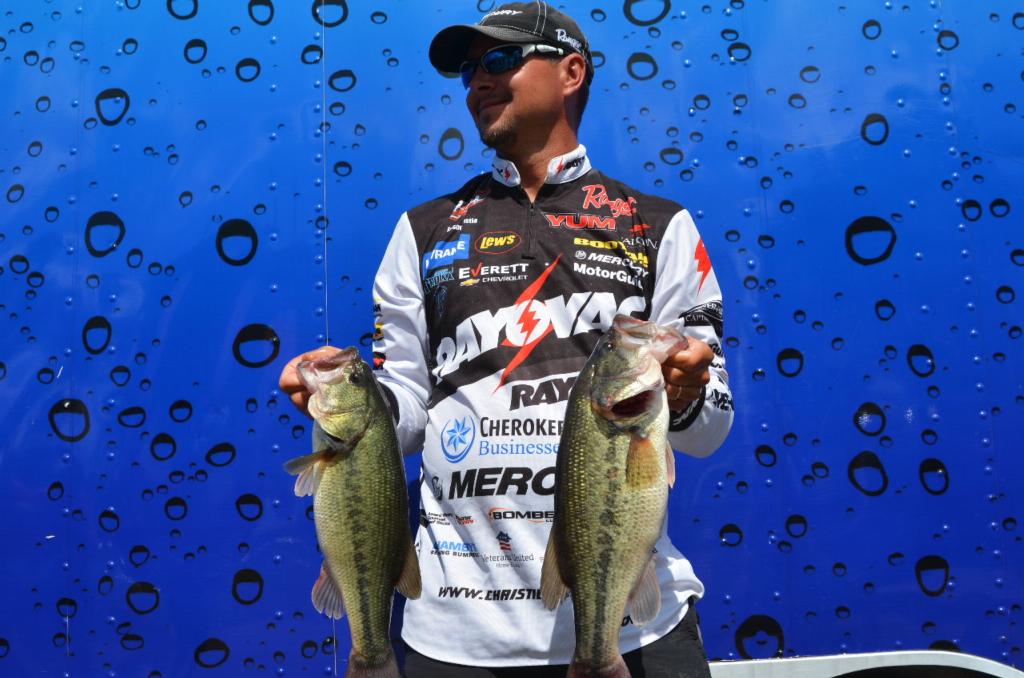 GROVE, Okla. – For the most part, the changing landscape of the FLW Tour event on Grand Lake has been a sight to behold. Water levels have shifted somewhat dramatically, starting off nearly 4 feet above normal pool and then receding steadily with each passing day. The muddied up waters that greeted anglers upon their arrival have slowly given way to more gin-clear conditions throughout significant portions of the lake. Throw in the fact that anglers witnessed sunny and calm conditions today, in stark contrast to the overcast skies and medium winds on day one, and it’s obvious that anglers have had much to process throughout this tournament. 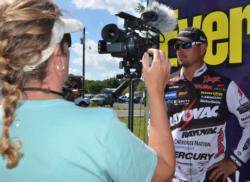 However, given all of the significant changes anglers have had to battle through this week, the one constant appears to be the standing atop the leaderboard. For a second day in a row, pre-tournament favorite and Rayovac team pro Jason Christie of Park Hill, Okla., has dominated the headlines. Bolstered by a total, two-day catch of 40 pounds, 10 ounces, Christie took a 5-ounce lead after yesterday’s competition and inflated it to nearly 3 full pounds after Friday’s weigh-in.

And although Christie – who considers Grand Lake to be his hometown water – had attempted to argue at the start of the tournament that the conditions left him with no local advantage, the results say otherwise. Christie is clearly on top of his game. And he’s now obviously the man to beat.

While weights were down across the board in Friday’s competition, including Christie who recorded nearly 2 pounds less than yesterday’s catch, the Oklahoma pro still managed to haul in the day’s biggest stringer in either division with a whopping 18-pound, 14-ounce stringer. 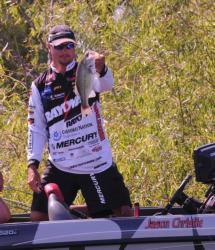 “I have three different patterns going on in three different sections of the lake,” said Christie. “And I’m using all three patterns each day. I have about 1,000 places on this pond, but it has to be the right deal. A stretch that was good today might not be good tomorrow. The water levels are starting to stabilize and there’s still plenty of fish. But you have to be in the right place at the right time. Believe it or not, I’ve never fished a four-day tournament here and I’m learning just like everyone else.”

While Christie lost two nice fish today, he basically chalked it up to the way he’s fishing.

“I’m basically flipping a Yum Wooly Bug in two different colors and throwing a Booyah spinnerbait. But I’m mostly flipping,” said Christie. “I did lose two big fish at the boat today so that was kind of aggravating. But that’s going to happen. I didn’t catch as many keepers as yesterday, but I still caught 20 to 25 fish. So overall, I’m pretty happy with how today went.”

One of the keys to Christie’s success has been an area in deeper water where he’s been able to haul out some of his bigger largemouth. While Christie didn’t want to divulge much, he did note that it was “off the bank” and that he appreciates windier conditions where fish continue to get prodded out into deeper water.

“I’m fishing at different depths,” said Christie. “Tomorrow I’m going to have to (adapt) to the conditions like everyone else. I’m just going to go out there and go fishing.” 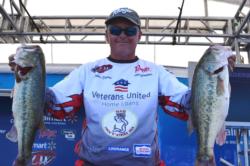 Based on a total, two-day catch of 37 pounds, 14 ounces, Robbie Dodson of Harrison, Ark., leapfrogged from eighth to second place overall.

“I feel good about where I’m at,” said Dodson. “I started out in practice fishing deeper water but didn’t have much success. Then the last day of practice I went shallow and started to get some good bites. So I’ve been fishing shallow the whole tournament.”

While some pros are keying in on a few areas, that’s decidedly not the case for Dodson.

“I’m running all over the place,” he said. “I’ve been fishing all the way from the dam plum back to (the marina). I’m trying to cover as much water as I can.”

Dodson said he’s been using a 3/8-ounce Lucky Strike jig with a Junebug twin-tail to land the majority of his catch.

“I had about 30 bites yesterday and only about six or seven bites today. But they were good ones,” he said. “I’ve mostly caught them really shallow, although I have caught some fish suspended off of the bank in about 2 feet of water. But for the most part, I’m not targeting anything in particular. I’m just running down the bank covering as much water as I can.” 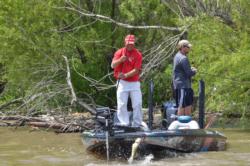 Longtime fishing veteran Zell Rowland of Montgomery, Texas, also made a nice move up the leaderboard in today’s competition. Although he started the day in ninth place, he managed to parlay a two-day catch of 36 pounds, 6 ounces, into a third-place finish after Friday’s competition.

Todd Auten of Wylie, S.C., slipped from third to fourth after today’s competition but is still only about 4 pounds off the lead with two days of competition remaining. 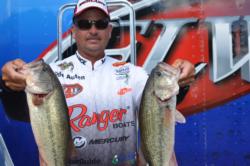 “I was waiting for that kicker bite today but never got it,” said Auten. “I’m fishing two main ways, flipping and moving baits – spinnerbaitrs, crankbaits and ChatterBaits. For the most part I’m fishing the same water but giving the fish different presentations at times. Today was a lot tougher with the sun because a lot of the fish seemed to have left the bank.”

Auten, like many pros, said the key to victory is being constantly able to adapt to the changing conditions as well as the changing positioning of the fish.

“The fish do move a lot here,” said Auten. “I have a couple of good areas, mostly shallow type of cover. I’m targeting shallow brush and yard grass – at least that’s what I call it. I’ve also caught some fish on willow trees so I’m mixing it up as well.”

As for being in fourth place, Auten said he doesn’t mind at all.

“I kind of like not being in the lead,” he said. “It kind of takes the pressure off.” 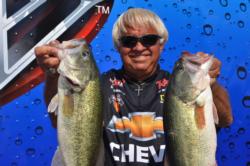 “They were bigger than I thought they were,” said Houston, who was characteristically upbeat about his day’s catch despite his fall in the standings. “I had a limit at about 7:30 but it was a small limit. I got some good bites early and kept pounding this little area all day. I just wasn’t able to get the bigger bites later in the day.”

Houston said his prime fishing area was a “one small bush” where he caught an amazing seven keepers today alone.

“I was throwing a spinnerbait and ChatterBait but I caught my biggest fish on a buzzbait,” said Houston, known as a shallow-water fishing specialist. “I caught a world of fish today and had a 3-pound average, but here you really need a couple of 5-pounders. My best place is reloading. But it’s just not reloading with big fish right now.” 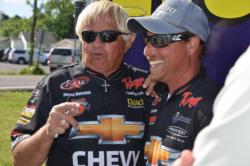 Houston said that the calmer conditions and increased pressure hurt him a bit today as well.

“The dead calm conditions really hurt me this morning because of a lot of the big shallow fish left my (areas) today,” he said. “I also had a lot of traffic that I didn’t have yesterday.”

Houston said that while he’d rather be higher up in the standings, he remains undaunted about his prospects.

“I’m tickled to death right now,” he said. “I’m only about 4 pounds (behind) Christie so I’m not too far behind. I know one thing, I can’t do anything worse than 20th place.” 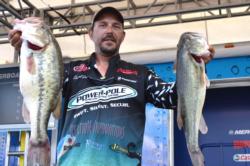 Darrell Davis of Dover, Fla., won the 3M ScotchBlue Big Bass Award with a catch weighing in at 6 pounds, 3 ounces. For his efforts, Davis won $500.

Like Christie, co-angler Keith Honeycutt of Temple, Texas, held onto the top spot on the leaderboard for a second consecutive day. Bolstered by a two-day catch of 30 pounds, 8 ounces, Honeycutt managed to increase his lead over his next closest competitor from 2 ounces on day one to 1 pound, 11 ounces by the end of day two. 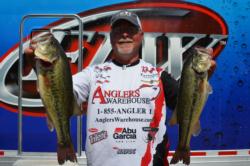 Honeycutt said that he landed all of his fish in shallow water on a Lucky Craft 1.5 crankbait.

“I was shallow cranking, targeting shallow flats near points and rock,” he said.

“I’m going out with Jason Christie and he’s a great fisherman. But it could be tough fishing behind him,” said Honeycutt. “So I’m just going to go out there, go fishing and let the chips fall where they may.” 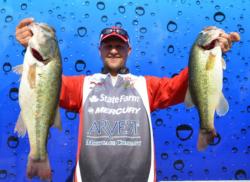 Anthony Goggins of Auburn, Ala., finished the day in second place with a total catch of 28 pounds, 13 ounces.

Jeff Sprague of Point, Texas, landed in fourth place with a total haul of 28 pounds, 7 ounces. 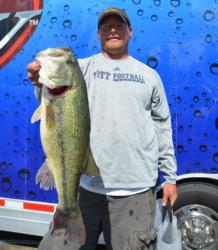 FLW Tour action on Grand Lake continues with Saturday’s takeoff, scheduled to take place at 6:30 a.m. at Wolf Creek Park, located at 963 North 16th St. in Grove, Okla. During day-three competition, a co-angler champion will be crowned and the top-10 pro finalists will be announced.