All but over for Ashley 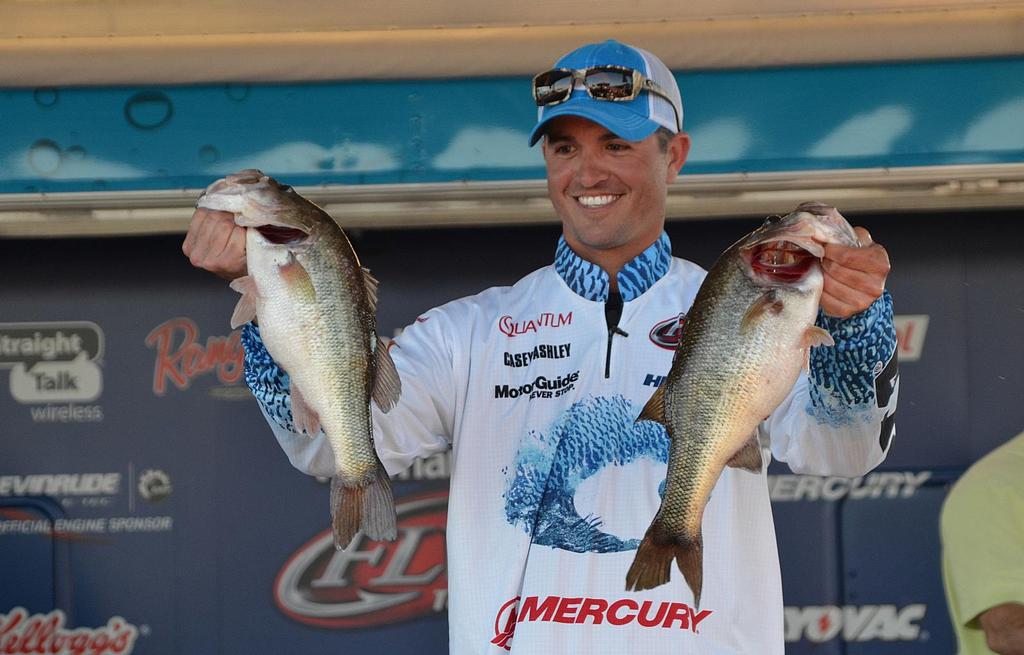 SENECA, S.C. – It seems nothing can stop Casey Ashley when it comes to catching bass on Lake Hartwell, his home pond – not cold, not wind, not rain and not even a three-hour fog delay. While most of the pros struggled just to put a limit in the boat Saturday, Ashley caught a 15-pound, 7-ounce stringer and built nearly a 10-pound lead.

Thanks to thick fog, day three didn’t technically begin until 10 a.m. By that time, Ashley decided to scrap his schooling spots because the sun was already too high. Instead, he immediately targeted his handful of productive brush piles, located in 35 to 40 feet that set up over ditches under boat docks. Needless to say, Ashley is probing precise pieces of structure.

“I was really worried because we had such a short day,” said Ashley, a BASS veteran and FLW Tour rookie. “My first bite was a big one and that lightened the mood. I’m not catching a lot of fish in one place, and I’m having to move around a lot and run a lot of stuff.”

Once he arrives to his areas, Ashley fishes incredibly slow with a 1/2-ounce Shooter Lures jig and a Zoom Super Chunk Jr. He also mixes in custom shaky heads (3/16 and 1/8) with a Zoom finesse worm. 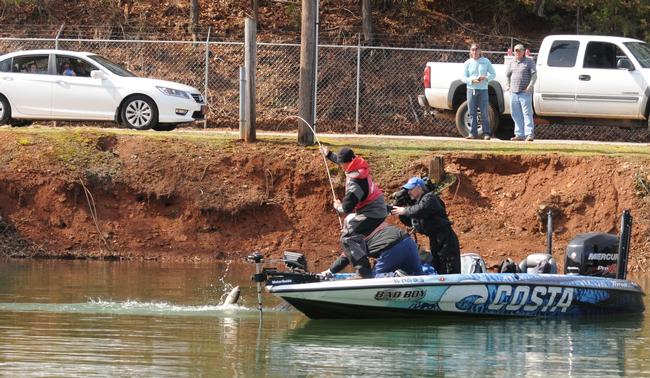 “Most of the big ones have come on the jig, but the shaky head is great for filling a limit. I learned a long time ago that Gourd Green is the best color when the water is cold.”

Ashley fully admits he’s a shallow-water stick at heart. But he knew the shallow-water fish would get hit hard by the Andy Morgans and Randall Tharps of the world. So he dug deep, both literally with his lures and figuratively with his local knowledge bank.

“The thing with local help is that it either really helps you or really hurts you. This week it has really helped me. It seems like I can do no wrong.”

The biggest obstacle with Ashley’s pattern is getting the fish out and over the crossbars of the docks.

“I’m going to stick with what got me here, but I’ve still got some stuff that I haven’t even fished yet. You can only cover so much water in five hours. It takes some time to keep fishing how I have been, and there is just not enough time in the day, especially today.”

After weighing in all largemouths on day one and mostly spotted bass on day two, Ashley brought a mixed bag to the scale on day three consisting of two largemouths and three spots. His total weight with one day remaining is 52 pounds, 11 ounces.

“I’m really looking forward to tomorrow. This is the greatest feeling ever – to do well in your home state. Winning this close to home would mean a lot. Most of the time I have to scratch and claw to get where I’m going. Taking a 10-pound lead into the final day is new to me, but I’m ready for it. That’s exactly what I wanted.” 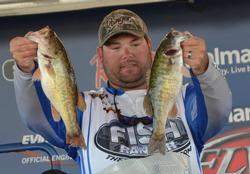 Clent Davis wasn’t happy with his day-three performance, but he was one of only six pros to catch a limit. His five keepers, the only five he caught, weighed 9 pounds, 3 ounces, bringing his total weight to 43 pounds, 1 ounce.

“I got two of the right bites, but they broke off on boat-dock cables,” said the Montevallo, Ala., pro. “Eight-pound test and boat cables don’t get along.”

Davis is using both a shaky head a wacky-rigged Mr. Twister Comida in water 15 feet or less. The docks he’s targeting are located along flatter, 45-degree angle banks down on the lower end of the lake.

“Today the corners of the docks were the deal.”

While Davis’ weight was considerably lower, he knows he’s around the right fish.

“The water is pretty clear where I’m at down by the dam and when I got there this morning there were 15 4-pounders swimming around one dock. I couldn’t get them to bite, but I’m most definitely around them.” 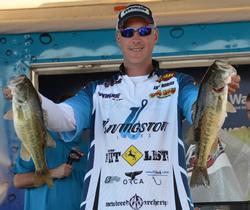 “That fog made for a tough, short day,” said Morgan. “Some of my best stuff was blown out by the mud. It kind of put me in panic mode. I had to force myself to slow down. I finally pulled into one spot and caught three. I’m basically winging it, trying to stay ahead of the fish, but I look forward to more and more sunshine.”

The defending Angler of the Year said he’s fishing Zoom plastics, a ChatterBait and an old-school big War Eagle spinnerbait.

“I caught a couple pitching, but it’s mostly a winding bite for me.” 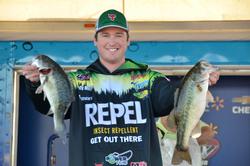 Outside of Ashley’s dominance, Cody Meyer’s 12-pound, 14-ounce limit was the story of the third day. The Repel pro rallied from 12th to fourth with a total weight of 40 pounds even.

Meyer is naturally drop-shotting brush piles in anywhere from 15 to 40 feet. He said he has 10 really productive piles, some located on red-clay points (which heat up quicker) and others under docks. His bait of choice on the drop-shot is a wacky-rigged Jackall Flick Shake worm. Occasionally, he’ll mix in a G Money jig.

“We started at 10 this morning but I didn’t get down to the dam where I’m fishing until almost 10:45. With more time and more sunshine tomorrow, I think the dock bite will be better.” 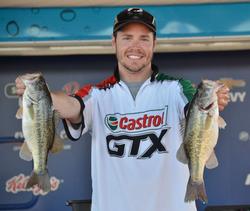 Rookie pro Ryan Davidson of Huntington, W.V., continues to mix it up with the big boys. He has two things working this week, but said it’s all area specific, not really a pattern.

While he culled a 12-pound limit yesterday, he caught only five largemouths today that weighed 10 pounds, 1 ounce.

“Yesterday my 6-pounder came in inches of water on a spinnerbait. I also caught some on a jerkbait and some on a football jig. I’m actually worried my staging fish area cleared up too much. It’s got to have some color along with the bait.”

Rounding out the top 10 pros on Lake Hartwell after day three:

The final day of FLW Tour competition on Lake Hartwell begins at 7:30 a.m. from the Clemson Marina, located at 150 Clemson Marina Drive in Seneca, S.C.