He’s comin’ in off a win and looking for more 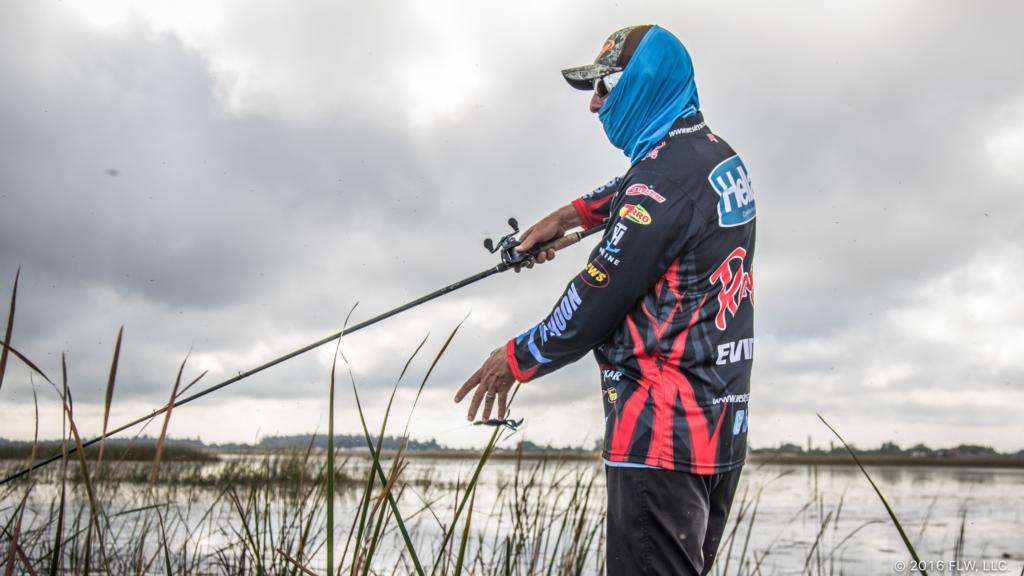 Wesley Strader is known and admired for his unique wit and constant cheer, but his consistency is what has been the true hallmark of his successful fishing career. Last week, that consistency paid off with the first big win he’s had since 2002 at the B.A.S.S. Open on the Kissimmee Chain in central Florida. Now he’s got his eye on starting the Walmart FLW Tour season on the right foot a few hours south at Lake Okeechobee.

We hopped in the boat with the Spring City, Tennessee, native for a look at how he approached the final morning of practice. 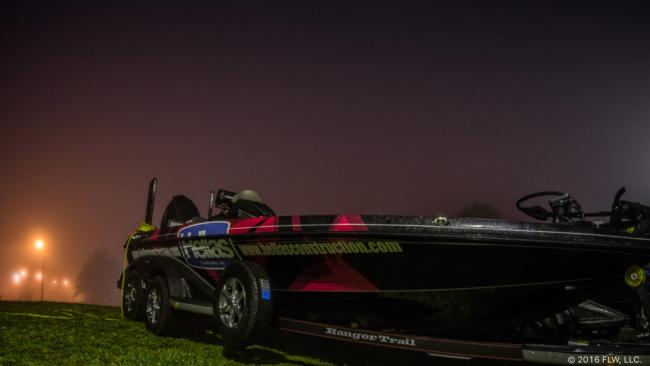 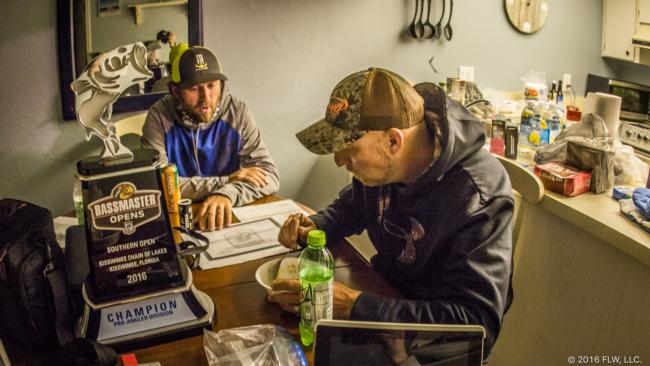 We started off in a sensibly imposed fog delay. As is common in South Florida in the spring, everything was dripping wet and blanketed in fog that would make navigating Okeechobee’s winding back trails dangerous. For Strader and Luke Dunkin, his practice partner last year and a rookie on Tour this year, the fog was a chance to move a little more slowly and for Strader to polish off a bowl of oatmeal to start the day. 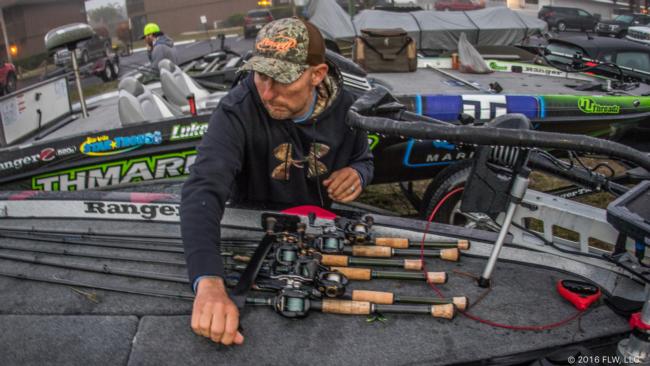 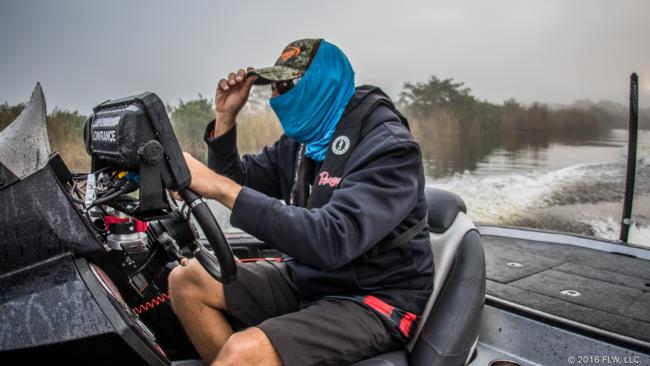 After moving his rods from inside to the deck of his Ranger Z521, Strader hit a gas station to fill up and was rolling on the lake by about 7:30. He had in mind to make a long run away from Clewiston to hunt for spawning bass in a few old haunts made newly accessible by the high water. Unfortunately, the fog was still fairly thick on the lake, so he elected to begin the day near Clewiston looking for a concentration of good ones. 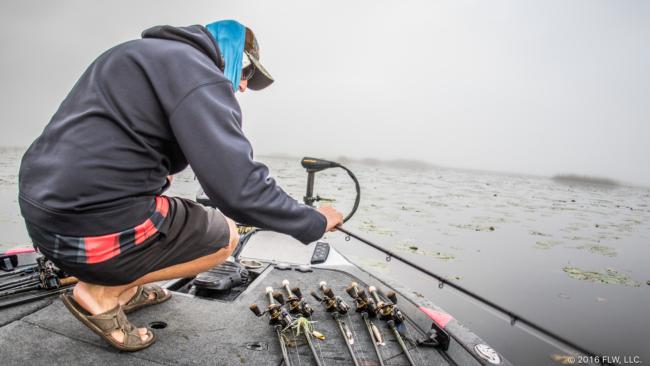 “You’ve gotta find those 50- to 100-yard magic stretches,” explains Strader. “It’s almost like ledge fishing, except you can’t use your electronics to find them.” 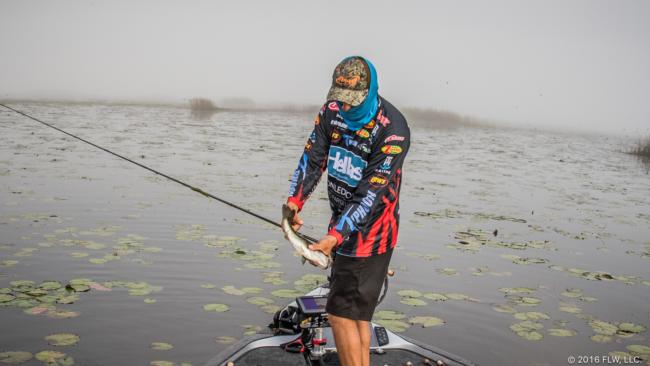 Strader’s first bass was a smallish keeper. He showed off how white it was and remarked that the fish had only just moved in off the main lake or outside edge and into the spawning grounds. The fact that little bucks are so prevalent in the shallows suggested that there are big females on the way soon. 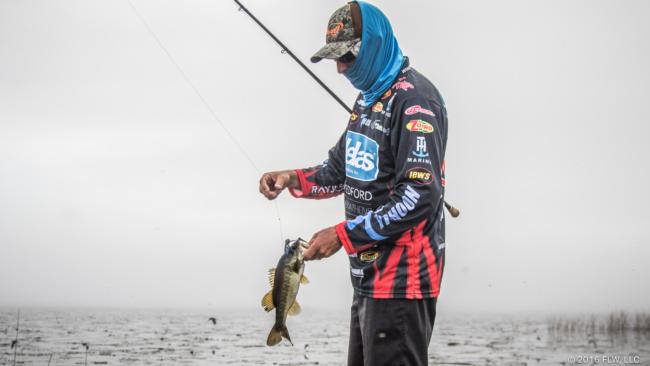 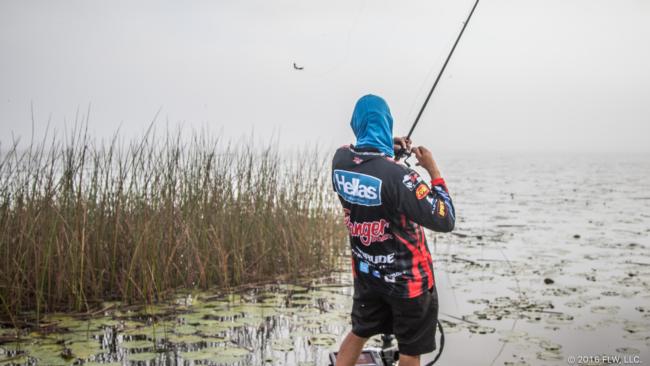 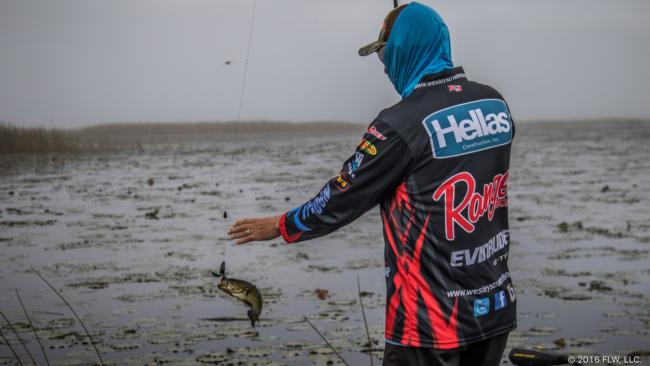 Of course, little fish aren’t the name of the game, and Strader really wanted to find a group of spawning males in the 2- to 3-pound range that could be solid keepers and a draw for the big females that win tournaments on Okeechobee. Unfortunately, he wasn’t having a whole lot of success finding those bigger fish.

“Catching little ones is kinda like riding a Moped,” quips Strader. “It’s fun, but you don’t want your buddies to know you’re doing it!” 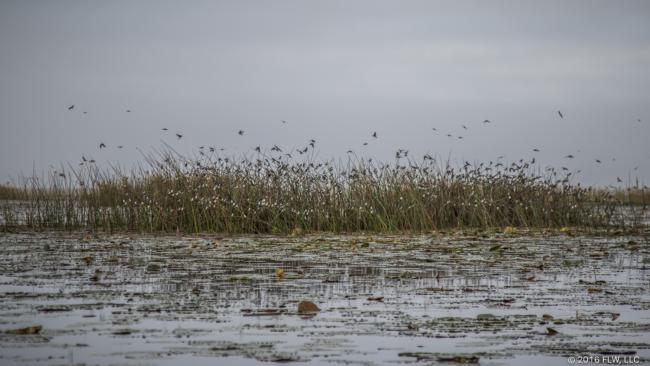 According to Strader, the reed heads with swallows roosting on them are particularly good targets. The swallow poop attracts shiners, which in turn attract bass.

Come to think of it, he might not have been all that serious. 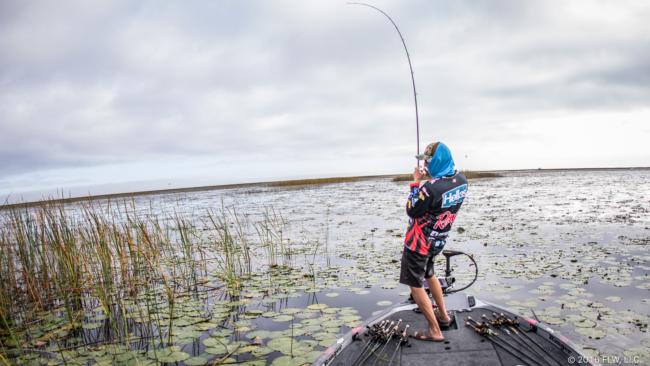 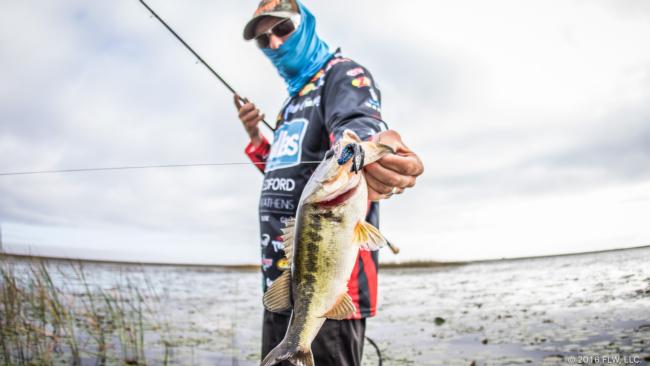 As the morning wore on and the fog burned off, Strader turned his attention from the pads to the reed heads interspersed throughout. Flipping a Z Hog, he put the best of the morning in the boat and hooked up with a few others that he felt had potential. The tournament certainly isn’t in the bag yet, but Strader finally had something to go on. 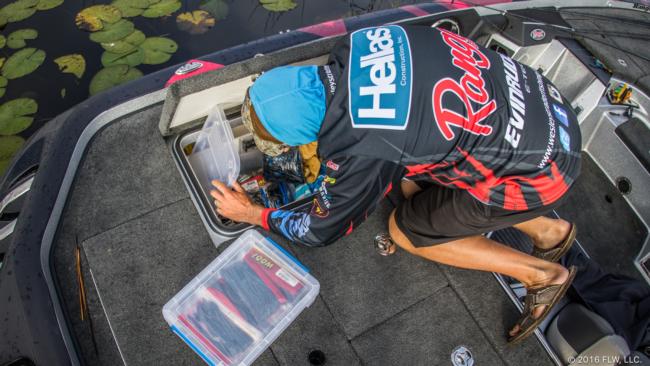 Strader’s burst of success had him digging for more baits. He keeps the majority of his bulk plastics in the back compartment, but had other bags that he knew he needed handy scattered throughout the boat for easy (though perhaps not perfectly logical) access. 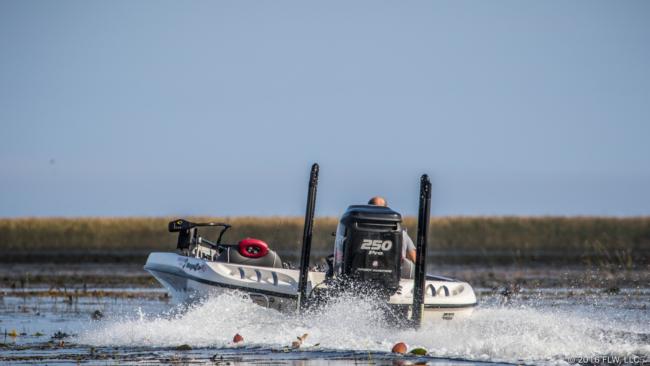 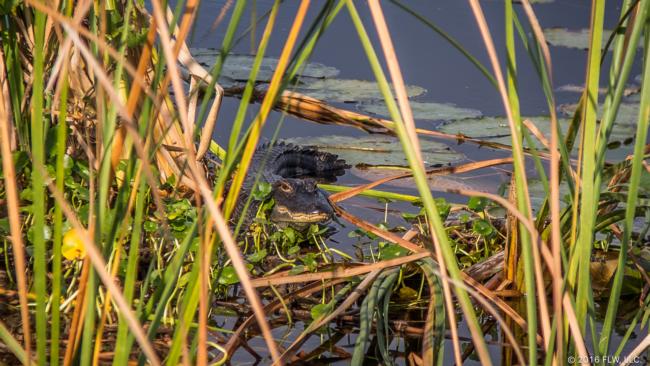 We weren’t the only ones on the water. Though Strader’s area wasn’t crowded, we could usually see another angler or two in view or passing by. There were also plenty of other non-human critters present, such as this gator sunning herself in the cattails. 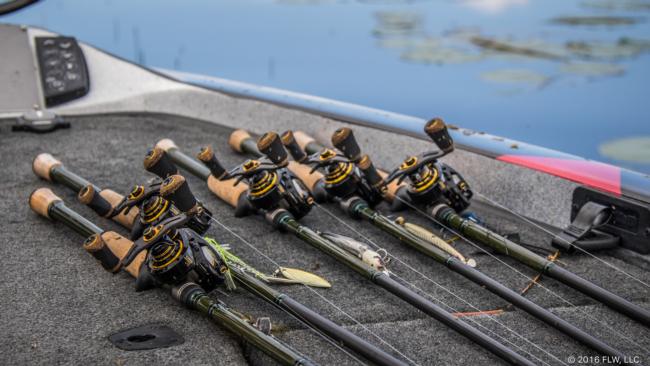 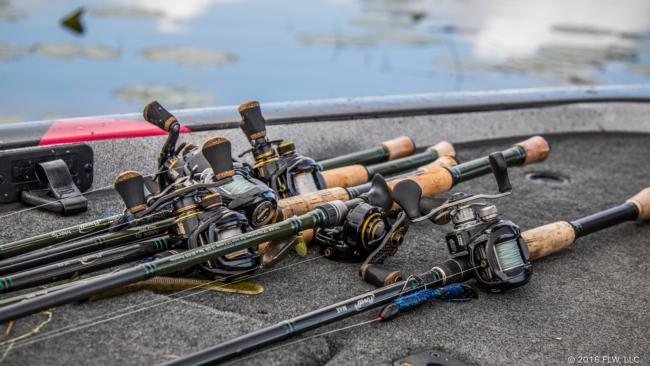 Even though he only picked up a few different rods while we were on the water, Strader had a number of other options on the deck. They included a few different vibrating jigs, his favorite Florida prop bait, some other staples and plenty of different soft plastics to sling in the grass. 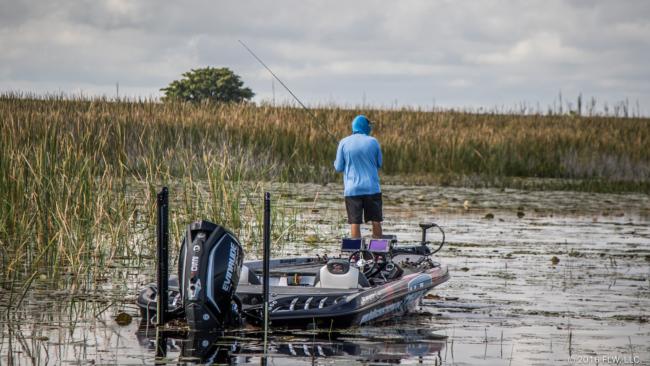 Midmorning, I left him fishing so I could get back to do some work. The last I saw of him, he had picked up to run clear across the lake looking for gold. Despite catching a few, he didn’t find the winning spot while I was in the boat. But who knows what he found at his next stop? We’ll see.