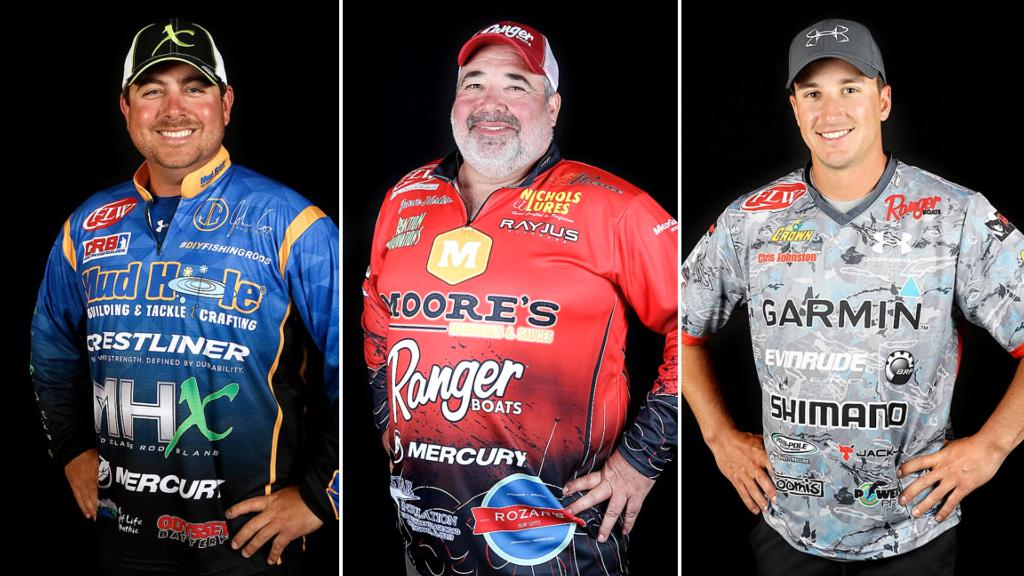 It might seem hard to believe considering we’re only two tournaments into the Walmart FLW Tour season, but the Tour’s Angler of the Year race is already one-third of the way over. The early contenders for the title have emerged, while some of the preseason favorites for AOY have slipped out of contention.

Also of note is that a few Forrest Wood Cup preseason favorites are in a dangerous place in the standings and must make up points at the next tournament on Beaver Lake in April if they even want to have a shot at the Cup.

Let’s dig a little deeper on a few of the contenders. 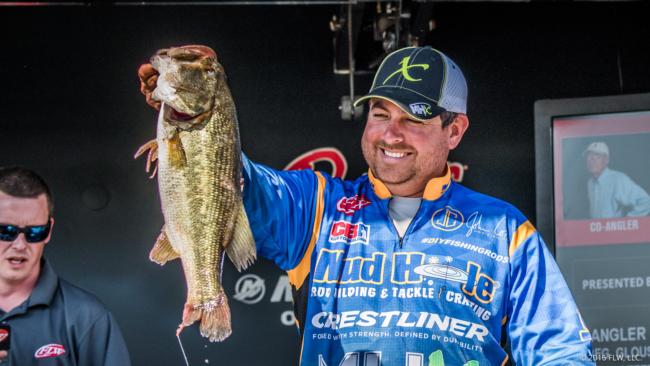 Cox is fast approaching the $600,000 career earnings mark thanks to his recent $100,000 victory at Lake Hartwell. The Florida pro is also on an incredible run. He finished second to Scott Martin in the 2015 AOY race and currently sits atop the 2016 standings.

In his last six regular-season events, which include the 2015 season and the first two tournaments of 2016, Cox is averaging a finish of 20.66th place. That’s about what it takes to win AOY – a top-20 finish at every stop.

Cox continues to prove that his minimalist, shallow-centric approach to tournament fishing can produce big results on the Walmart FLW Tour. Generally, the Tour presents him with a string of tournaments that fall on the prespawn, spawn and postspawn seasons, and that’s a big part of why he’s been so successful. There are always hawgs shallow that time of year.

Lake Hartwell was right in Cox’s wheelhouse. The fish moved up, and he was able to sight-fish and target bank-dwellers the entire event. Now the Tour heads to Beaver Lake, where Cox made a top 10 last year and there’s almost always a shallow largemouth bite in spring tournaments, and there could be a sight bite this time. Last year he ran way upriver to an area so shallow and wood-strewn that FLW’s media team honestly considered borrowing a kayak to reach him. Perhaps that strategy will be in play again for Cox and his aluminum rig.

Winning AOY will not come without its challenges for the sixth-year pro. After Beaver, the Tour heads to Pickwick. Most assumed there’d be plenty of fish shallow on the Tennessee River lake, and probably there will be. But with the warm spring most of the Southeast has experienced, it’s highly likely that there’ll be a mix of deep and shallow patterns. For Cox, success could depend on how many shallow anglers he’ll have to contend with, and just how good the offshore bite will be. After that, Kentucky Lake is practically guaranteed to be won offshore – the entire top 20 might come from the ledges. But, there are always big fish shallow there too. The season wraps up on Champlain, where everyone will be catching them and Cox will have to consider making the big run to Ticonderoga in his aluminum modified-V-hull boat. That’s a tough call.

Cox has proved he can catch them shallow anywhere, anytime. Should be exciting to see how the rest of the season goes. 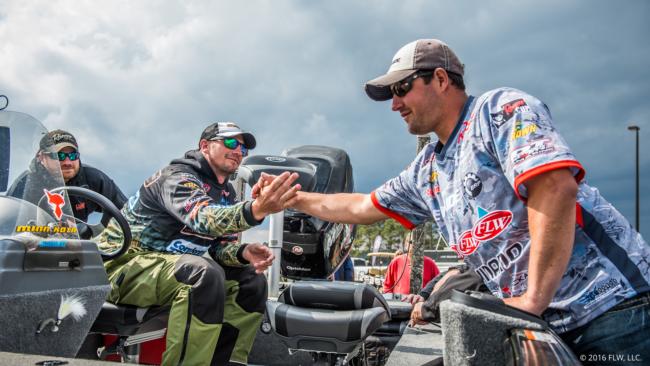 Honestly, it’s not fair to lump the Johnston brothers and Gussy together into one group just because they’re all Canadian and all in the top 10 of the AOY standings. Each is a fantastic angler in his own right. Yet, I’m going to do it just this one time anyway.

The three are good friends and room together at some events. The Johnstons share all fishing information, and Cory says they share some intel with Gussy, though Gussy found his own program at Hartwell and rode it to a top 10.

Most importantly, the willingness to work together is a huge advantage on Tour, especially since the Johnstons are rookies. The strategy worked at Okeechobee, where Cory finished third. At Hartwell the Johnstons sight-fished. Next up is Beaver, a lake where pattern fishing wins and having two anglers working together could shorten the patterning process. Oh, and Gussy has done well there before.

After that, the Tour goes to Pickwick. Gussy has a top 10 on his resume there. Then it’s Kentucky Lake, where practice is spent idling for hours on end. Imagine how many schools two anglers could find in three days of searching.

And finally the Tour wraps up on the one lake where you’d most likely expect the Ontario trio to do well: Lake Champlain.

Currently, Chris is just two points behind Cox in a neck-and-neck race. Gussy is 25 points back. It’s a hill, but it’s by no means insurmountable with four tournaments remaining. Ditto for Cory and his 33-point deficit. One of these three will still be in the hunt at Champlain, where Chris and Cory will probably also be duking it out for Rookie of the Year. 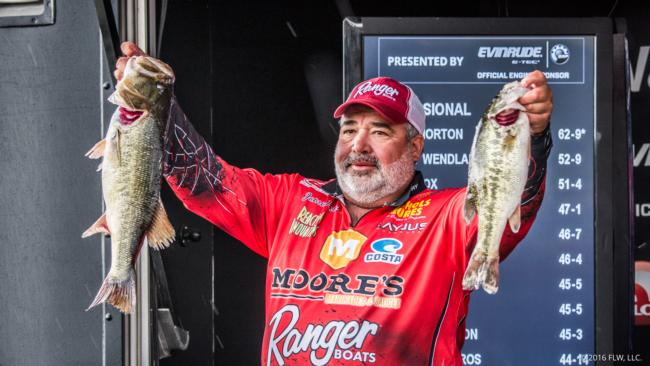 Though he’s a first-timer on the Walmart FLW Tour, Horton isn’t a rookie angler. The Centerville, Ala., pro spent a few years on the Bassmaster Elite Series before joining the Tour. The switch seems to have suited him well. Horton finished 18th at Okeechobee and third at Hartwell and is only eight points behind Cox.

Horton has a long track record of FLW Bass Fishing League success on Lake Martin, Logan Martin, Neely Henry and Lay Lake, as well as others, and it sounds like his preferred types of fishing line up perfectly with most of the lakes on Tour.

“I’m a big-time largemouth guy versus spots,” says Horton. “My favorite type of fishing is swimming a jig, I love sight-fishing and I like fishing ledges a lot. My weak points are finesse fishing and clear water. The only way I can catch them in clear water is if I can see them on beds.”

Obviously, the conditions at Hartwell played right into Horton’s hand. It’s a clear lake, but he was able to sight-fish the entire tournament. He’s also been putting in the prep time. Horton works four 10-hour days each week as a fabrication manager for a construction company. On Fridays, he bugs out and practices for events that are within a reasonable drive, or on lakes that are similar to those on the Tour schedule.

“Beaver is going to be extremely challenging for me, especially if they’re not on beds,” he adds. “I have spent a lot of time in the last month or so preparing for the two together, Hartwell and Beaver. By that I mean I’ve spent a lot of time fishing clear water. I know that’s the weakest point I have. It scares me more than anything. I’m learning that fish bite better in clear water probably than dirty water. You just have to change what you’re doing, and it’s more of a head thing for me.”

Horton says he’s more comfortable than ever now that he’s with FLW. He’s fishing around old friends, and his confidence on the water is high. If he can get on a few at Beaver, expect more solid finishes from the Alabama pro. 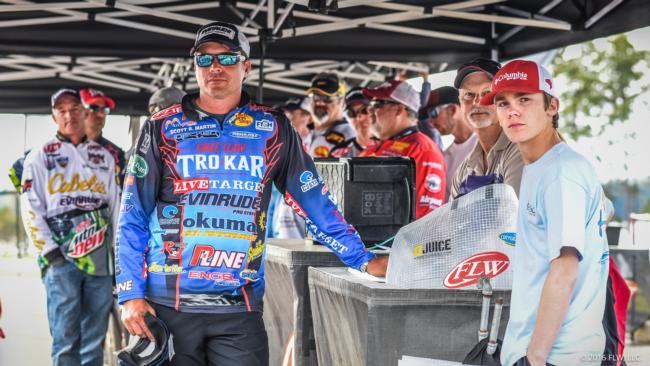 Cox can’t be comfortable having these two just a few spots behind him in the AOY race. Martin ruined Cox’s AOY dreams last year when Cox slipped at the Potomac and Martin made the top 10. Martin should stay strong the next few events. He has as much experience as anyone on Beaver Lake and probably doesn’t get as much credit as he deserves as a solid ledge fisherman. And if this race comes down to Cox and Martin at Champlain, the nod has to go to Martin, who’s won there before.

Wendlandt is a three-time AOY who has returned to his old form the last couple of seasons. Expect him to stay right at the top of the standings after Beaver Lake. After all, he used to be known as Mr. Beaver Lake because of his success on the White River impoundment – he won there twice. If Beaver becomes a sight-fishing contest, Wendlandt is one of the best ever at “lookin’ at ’em.”

One of these veterans will be in the top five when the season ends; you can almost bank on it.

Cup contenders on the bubble

It’s early, sure, but a few anglers who most would consider to be favorites at the Forrest Wood Cup on Wheeler Lake – if they make it – are already at risk of not qualifying. The top 35 in the standings go to the Cup.

– Jonathan Newton doesn’t live far from Wheeler. He’s in 34th place and is safe for now – but barely.

– Alex Davis, in 40th, finished runner-up at Okeechobee but bombed at Hartwell with a 105th-place finish. He’s a guide on Guntersville, which is one lake upstream from Wheeler.

– Cody Meyer might not be known as a Tennessee River stick, but it’s noteworthy that he’s in 52nd in the standings. Since 2011, he’s never finished lower than 15th.

– One of rookie Luke Dunkin’s motivating factors to move from co to pro this year was the Cup site at Wheeler, which is one of his home lakes. He’s in 56th.

– Bryan Thrift recovered from his 132nd-place showing at Okeechobee by finishing fifth at Hartwell and now sits in 57th place in the standings.

– Tom Redington is an offshore whiz, but he’s currently in 93rd.

– The most notable angler who’s in danger of missing the Cup is Jason lambert. Currently in 159th, Lambert is probably the local favorite if he makes it to Wheeler.