Almost time to cut to 20 for day three! 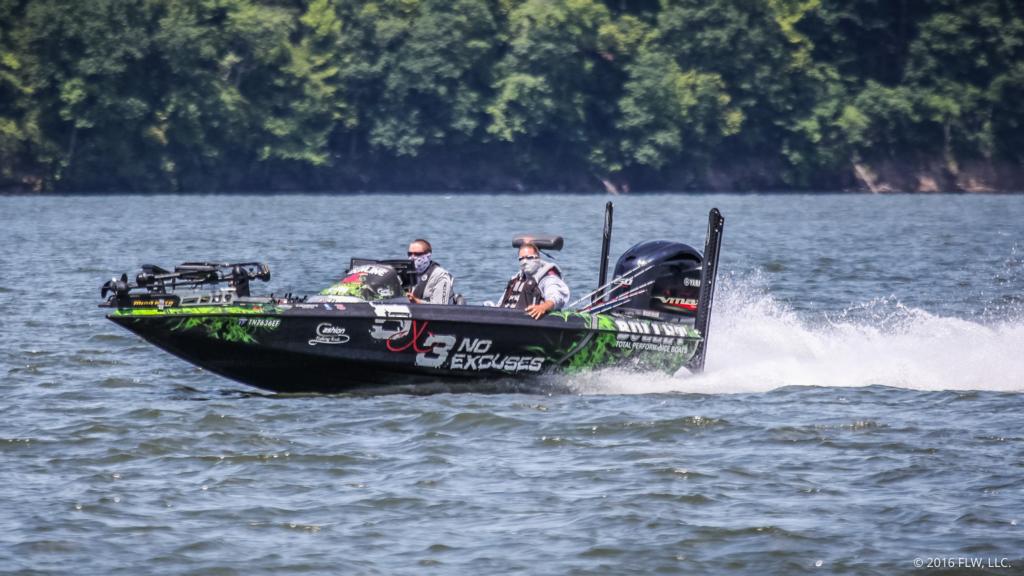 Places to fish on Pickwick and Wilson

Only the top 20 fish tomorrow, and from the looks of it, making the Buck Knives Cut is going to be very close today. There are a lot of limits around the field and some big names we haven’t hit yet. Long story short, a lot could happen at weigh-in.

One thing to watch is the lock at Wilson. Yesterday it sank a lot of anglers, but some double-dipped and went back and a few even ditched Pickwick (Brad Knight in particular) and headed to Wilson for a change of pace. If someone can make something special happen up there we’ll have a whole new ballgame.

So buckle up for a wild weigh-in!

Watch the day-two weigh-in live at FLWFishing.com starting at 3 p.m. CT or come down and watch in-person at McFarland Park at 200 Jim Spain Drive, Florence, Ala., 35630. 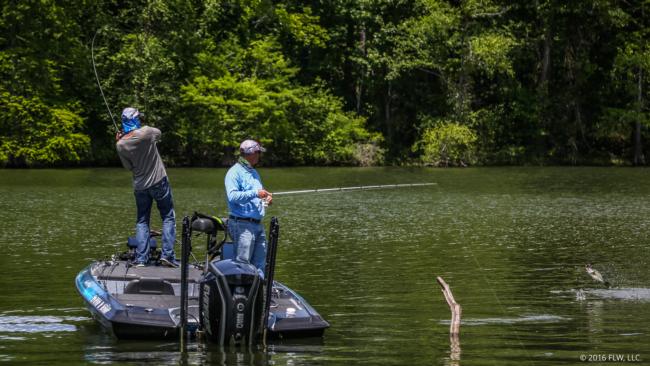 Matt Arey just checked in with 14-15 pounds and Andy Morgan and Glenn Browne are also building solid 12+ limits. The shallow bite seems to be pretty steady so far, which isn’t unexpected at all. Pros are approaching it with a lot of diversity. From Morgan flipping down the bank with a little bit of everything to Matt Arey (and others) slinging shallow crankbaits, there are apparently lots of ways to catch a bass. 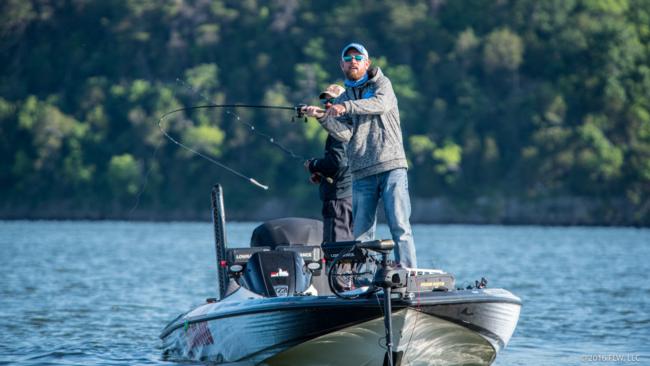 Day two seems to have entered a bit of a lull and a large part of that is the fact that very fishable bass on the ledges simply won’t fire. Right now, Jason Lambert has about 11 pounds and is sitting on a school with about 30 bass in it that he can’t get to fire. Not only can’t he make them bite, another six of his schools have completely disappeared off the face of the earth (or the ledge). The same goes for Travis Fox, who has a good limit and will likely be fishing Saturday, but he has also failed to upgrade for a shot at the lead and his inability to make it happen on the ledges is holding him back. Heck, even guys like Clark Reehm and Michael Wooley, who caught them decent on the ledges the first day have struggled to fill limits today.

Around the field, Alex Davis still just has two in the box, Rick Cotten hasn’t had a bite in hours and is just sitting on the two big ones he caught early. As for pros just looking to make a check, Troy Morrow has a limit with a nice smallie and is looking for just one more to bump a dinker so he can make 10k.

After a frighteningly good morning on day one, Scott Canterbury is struggling on day two. He’s got four in the box, but none of them are very big, and he’s had to run all over the place to do it. Making stops from above Natchez Trace to right on the Pickwick Dam, Canterbury is currently long lining mid-lake and still hunting No. 5. Even with a fifth in hand, he’ll need a few more big bites to stay tight to the leaders. 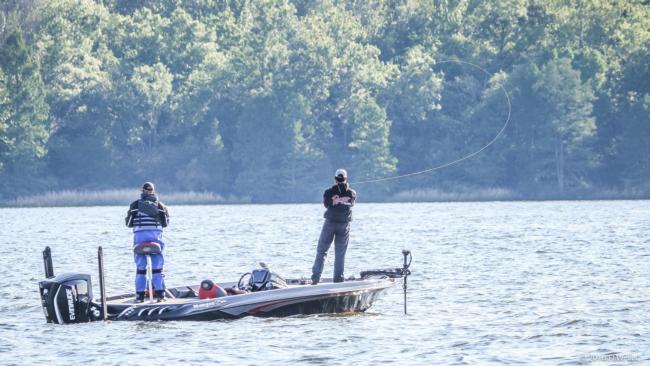 So far on day two, despite mostly calmer and warmer weather, the ledge bite hasn’t really fired up. There are for sure anglers out on them, and obviously a few have done well there, but the electric crankbait bite that early ledges are known for hasn’t materialized. In fact, the main ledge tactics across the field right now are a mix of jigs, Carolina rigs (always a killer on Pickwick), hair jigs and spinning rods.

Up shallow, around the grass and flipping grounds, it’s a pretty standard mix of vibrating jigs, soft plastics for casting and jigs, beavers and Brush Hogs for flipping.

It seems like the quality should be out deep, but it’s hard enough to come by that the angler sup shallow can keep pace on the backs of decent (but not huge) fish.

Finally, one mystery of the day is Wilson. We didn’t put a camera boat up on the smaller lake today because so many headed there likely busted on day one. Nonetheless, there’s some rumor that a few pros who did okay on Pickwick may have tried Wilson today, and the conditions should be better there today as well.

After some morning struggles, Michael Neal seems to be getting back on track a little bit. In the last 10 minutes or so, he’s put his third and fourth in the boat and is now up to about 10 or 11 pounds. Not quite the giant bag he had on day one, but certainly a good start. If he can add a kicker or two the rest of the day he’ll stay right in the thick of things.

Also among the leaders is Scott Suggs. The former Forrest Wood Cup champ says his shad spawn bite got blown out by muddied water, but he’s still doing decent. He’s fishing offshore at the moment and has four fish for 12 pounds in the box.

Around the field, Wesley Strader and David Dudley are up to about 12 pounds, Clark Reehm and Michael Wooley each have one, Randy Haynes didn’t have any about an hour ago and Bryan Schmitt only has one.

Buddy Gross says he’s up to about 17 or 18 pounds now and he could very well keep working on them to catch a few more.  However, that’s not his decision at the moment. Instead, Gross has elected to put his rods down for a while and do some idling in hopes of finding the motherlode and preparing for the weekend. With 25+ in the bank after day one, he’s certainly making the top 20 and the weekend. 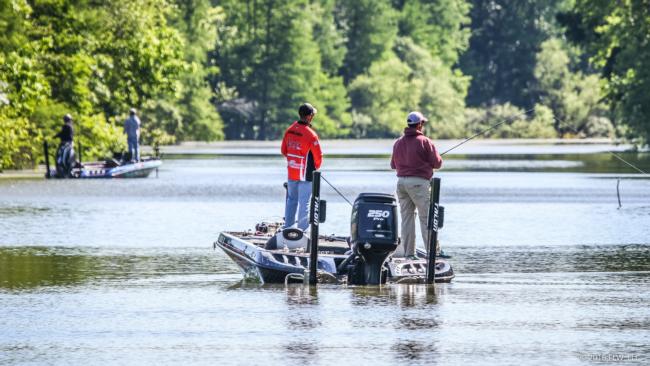 Though the Pickwick was beaten pretty hard by the wind and waves yesterday, it is much calmer today, warmer and still very sunny. For sure, Buddy Gross and some have been in rough water, but overall, the lake is a lot calmer. On parts of the lake, like down by Bear Creek, it’s even continuing to calm down after the last gasps this morning.

The current is up a little more today as well, and the TVA is pulling around 17,000 CFS at the moment. It isn’t projected to get any stronger, and that isn’t a tremendous amount of current, but it’s better than nothing. 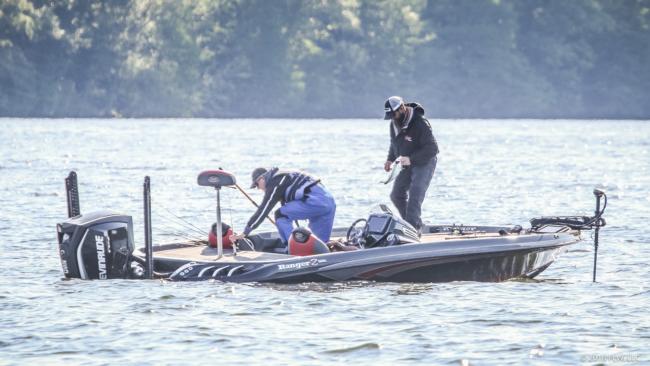 Around the field, Pickwick has produced a mixed bag today. For Zack Birge, who only has one, it isn’t that great. For Travis Fox, who’s still rolling from Kentucky Lake, Pickwick is treating him alright. So far this morning, he has four in the box (two good ones) and is around the 10-pound mark already. On the other side of things, Michael Neal’s hot start has fizzled a little. He’s still on two bass and he says the biggest school he had located is now just white bass.

Also on the board are Cody Meyer (two keepers), David Dudley (one keeper) and Jonathan Newton, who has started with two good ones. 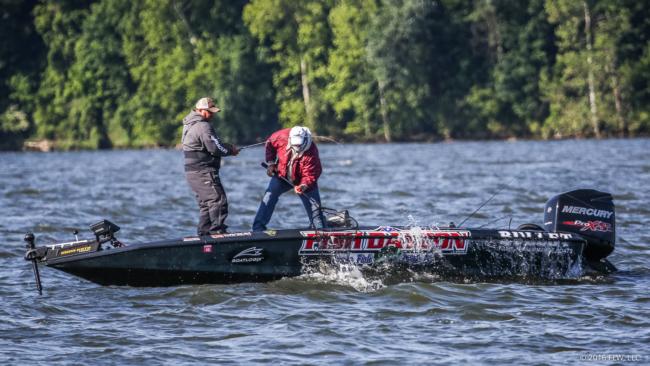 It took us a bit, but we’ve got up on day one leader Buddy Gross and he’s off to a pretty good start again. So far, he has five in the boat for a total of 15+ pounds.

He seems to have a pretty unique grass/ledge deal figured out and is fishing in pretty rough water out in the main lake. Like Cotten, he isn’t burning, but instead relying on slower, more finesse ledge tactics at the moment. 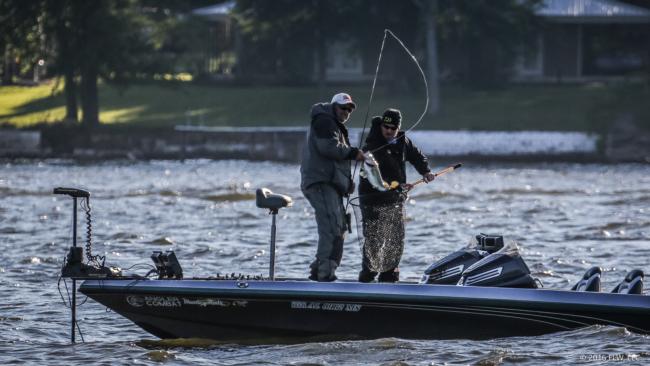 After getting on the board with a 4+ to start the day, Rick Cotten is back at it with another quality fish that may be a little bigger than the first. Perhaps best of all, the wind isn’t killing him and everyone who started with him has since left. If there was ever a time to really pour it on, this is it.

Contrary to the usual convention of cranking and throwing aggressive baits early in the season on the ledges, Cotten is fishing nice and slow on a breakline, but not a main river ledge. As for any other details, we’ll let him share those – perhaps at weigh-in this afternoon. 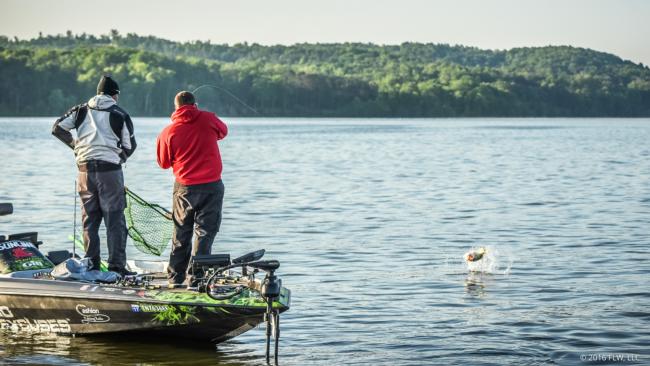 Right off the bat, Michael Neal is rocking again. After a valiant comeback for second place last time the Tour stopped at Pickwick, it looks like he’s gonna be in contention for a win this time around too. So far, he’s already got two in the boat for close to 7 pounds off his starting spot.

As for Rick Cotten, perhaps helped by the departure of Chris Johnston, he started his day with a solid 4+. Though there might not be a ton of easy biters on his spot, it certainly has some good ones.

Jeff Sprague in action on day 1

Rick Cotten rolled up to the same place he started day one to start day two. Yesterday, with only four bass, he had enough weight to place in the top 10. He didn’t have the place entirely to himself on day one, but he’s got a little more company on day two. So far, Alex Davis, Chris Johnston and Kurt Dove have joined him. Reportedly, Cotten and Johnston aren’t too happy with each other. Davis and Johnston at least, were for sure on the same spot day one as well. Ledge events nearly always lead to some kind of conflict – hopefully things get worked out peacefully today. 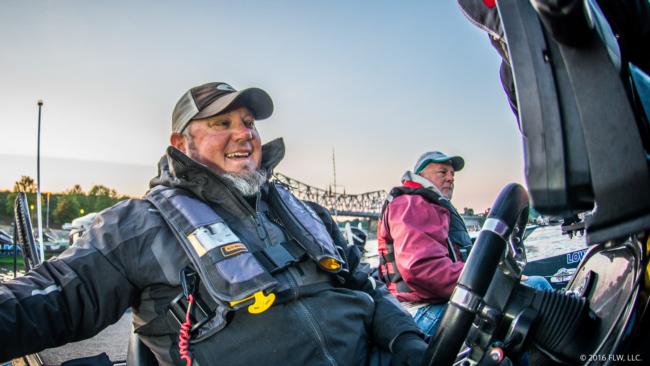 Day two of the Walmart FLW Tour presented by Quaker State on Pickwick Lake looks to be much friendlier to the anglers than day one. Though it is still cool, the wind at takeoff is basically nonexistent and it's only forecast to get to about 10 mph today – far less than yesterday’s gale force gusts.

With less wind comes more opportunity for the pros keying on offshore bars and deep ledges on Pickwick. It may not change things too much for the cadre who have stayed shallow (some, like John Cox and Glenn Browne with a lot of success),  but for anglers like Michael Neal and Randy Haynes, the offshore bite should be much easier to manage.

Buddy Gross is heading out with the lead after catching 25+ on day one, bot he’s not far in front. Especially on Pickwick, where a 30-pound bag is just five casts away.

Watch the day-two weigh-in live at FLWFishing.com starting at 3 p.m. CT or come down and watch in-person at McFarland Park at 200 Jim Spain Drive, Florence, Ala., 35630.