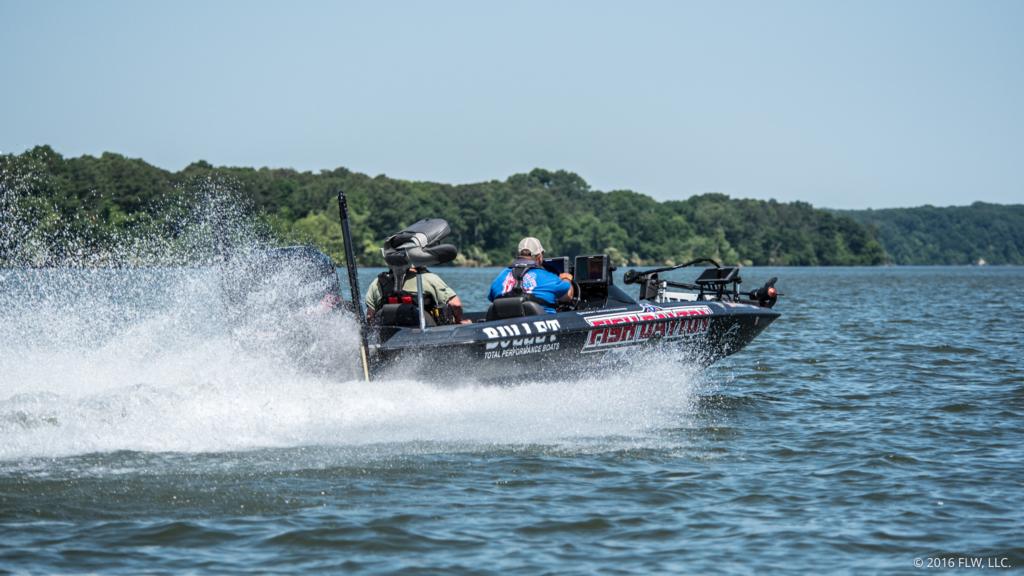 With check-in at 3:15 p.m. CT, most of the pros are at least working their way back by now, with perhaps a stop or two thrown in along the way. Though there’s hardly any question who’ll be leading at the end of weigh-in, there should be a tremendous competition for the rest of the top 10. Plenty of pros in the top 10 have either very small limit or no limit at all, and guys like Wesley Strader, Peter T, Stephen Patek and Andy Morgan have done some damage today. Do they have enough to bump pros like Scott Canterbury, Travis Fox and Jeff Sprague out? Only time will tell.

Watch the day-three weigh-in live at FLWFishing.com starting at 4 p.m. CT or come down and watch in-person at McFarland Park at 200 Jim Spain Drive, Florence, Ala., 35630. 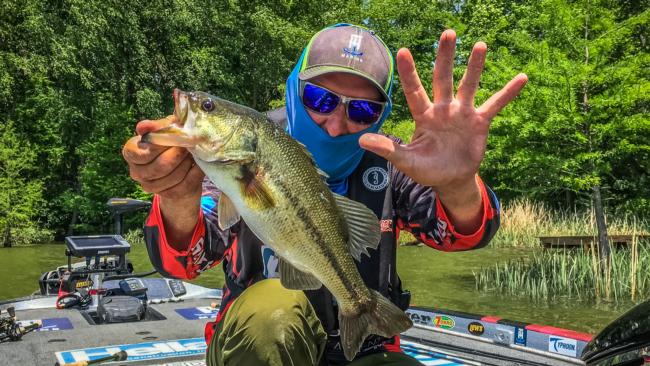 We just got Wesley Strader back into cell coverage and he rolled in with a pleasant surprise. Lo and behold, the Tennessee pro has cracked up 13+ (including a dandy 4-pounder) that might put him in the hunt to move from 18th into the top 10. As usual, Wesley has been near the bank most of the time junking along as he is wont to do.

Also of note, Scott Suggs has finished a limit for about 10 pounds, Scott Canterbury has about 9 pounds with only three fish and Michael Neal is still stuck on four bass.

We’re heading into the final hours of the day and there are still a surprising number of pros short a limit. From Scott Suggs to Scott Canterbury, Michael Neal and Travis Fox, there is a good chunk of pros who simply haven’t connected on a wicked stingy Pickwick. Why the fish aren’t biting is likely unexplainable. What’s definite fact is that some of the best in the business need to figure something out really fast.

Andy Morgan started the day in 19th place, but he’s going to move up a pretty good bit by the end of the day. He’s flipping in the Coffee Slough area and has put at least 13 pounds in the boat so far (and probably more).

His bite picking up could be a sign for the rest of the field as well. Barry Wilson just finished his limit at about 13 pounds to secure his place in the top 10 for tomorrow. Also upgrading is Randy Haynes, who has about 13 now and has made a few culls.

Perhaps most notably, Jamie Horton (who started the day in 5th) has cracked a 5-pounder to put him at about 15 pounds. Now, outside of Buddy Gross, he’s got the big bag of the day by a decent margin.

For some reason, perhaps the lack of current or lack of wind (it’s pretty slick in many parts of the lower lake), the fishing has been tough for most everyone outside of first place.

Sure, Randy Haynes has limited and culled into the low teens, Jay Kendrick just added a 2+ to put his three-bass total around 9 pounds and Peter T finished his limit at about 12 pounds, but it’s tough. The fact that Stetson Blaylock, Andy Morgan and Haynes are notable for merely having small limits is somewhat stunning.

Below are the weight estimates we have for some of the pros fishing on day three. Keep in mind, the weights are very unofficial. 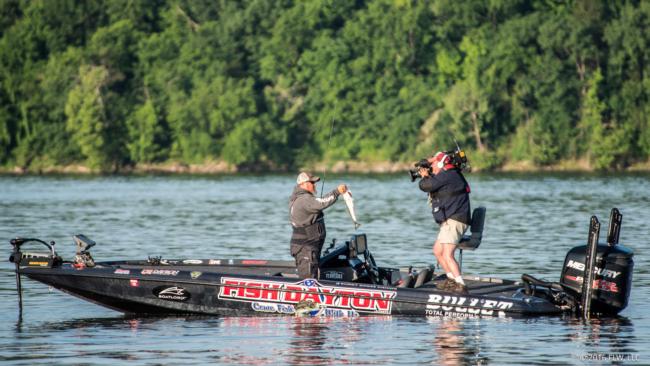 After moving a little ways off his primary area, Buddy Gross may have just won the tournament. In quick succession, he put his fifth and sixth in the boat and culled up to at least 19 pounds. Now, he's back to running and idling and looking for another school or two as bonus fish. If Gross keeps it up, he’ll be having pizza for lunch at the docks about noon on Sunday.

There’s still a chance that someone else catches a few really big bags in a row, but adding 18+ to a lead that was already nearly 9 pounds might make him unassailable, especially as nobody has approached his level of success thus far today. 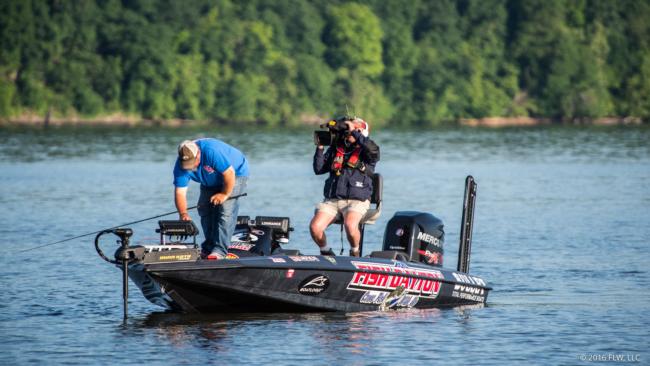 10:10 a.m.: Gross is sitting still and others are working to catch up

Buddy Gross has been pretty quiet the last couple hours. Though he lost one and caught a short, he’s still sitting on just four bass. Obviously, he’s got a big lead, but we’ve seen even experienced pros spin out a bit on the weekend, and the crew behind him isn’t going to be cutting Gross any slack.

Behind him, Michael Neal is doing the best, having added a third fish for a total of around 8 pounds. He needs more – if catching Gross for the win is the goal, it is almost imperative to catch more weight than he does today.

In third, Scott Suggs has had a pretty good morning. He sputtered to start up shallow, but recently got on a school offshore and has one shy of a limit now. Still, he only has around 8 pounds.

Back in ninth, Randy Haynes is moving up a bit with three in the boat, including two that are around 3 pounds. Naturally, he’s been fishing offshore. 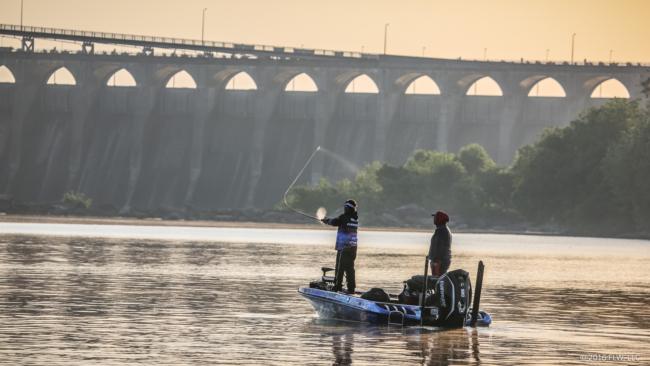 There might not be a single element more important than current on the Tennessee River lakes. What the TVA is doing with the water usually has a huge effect on the fishing and more current is almost always better. It sets the fish up on ledges more distinctly and usually triggers the bass to feed. The TVA is actually running more current today than the first two days, so that should be good. Right now, there are two generators open at the Pickwick Dam and it is pulling almost 18,000 CFS. Per the TVA app, three generators will be running from 2 p.m. on into the night this afternoon. If that third generator kicks in early, or if something changes, we can almost surely expect a flurry on the ledges.

Rick Cotten had a promising start to the tournament, boating a giant on the first day that staked him to a place in the top 10. He did the same on day two, each time taking advantage of an early bite and then failing to fill his limit in the afternoon. Today, Cotten has nothing at nearly 9:30 in the morning. If his day goes like the previous ones, he may well have missed his chance to make the top 10.

For a while, Buddy Gross had a lock on the news from the top pros, but that isn’t the case anymore. Michael Neal finally got on the spot he wanted to be on to start and promptly cracked a pair of 4-pounders to start his day. Working a shad spawn deal with a spinnerbait, Jamie Horton just put a 3-pounder in the box and seems to be on track for another good day. Not quite up there after a tough day one, Scott Canterbury is nonetheless catching them. It took a bit, but a while ago he finally pulled up on a totally new ledge and caught a 4-pounder right off the bat and then added a solid keeper smallie with it. 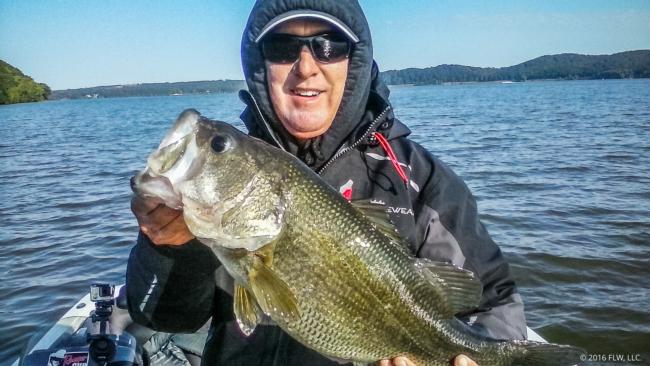 Mike Surman just popped a 6-pounder to add to a 2-pounder he already had in the ‘well. Couple more like that and he’ll have a very strong case to move from 14th into the top 10. Also of note, Jay Kendrick started his morning with a 4-pounder. That’s also a pretty good way to go. Even from someone in 14th (Surman) or 17th (Kendrick) could move up big today and get in position for a run at the lead tomorrow. Huge bags in the upper 20s aren’t that unusual on Pickwick, and there is a solid chance that someone will catch a really big bag today and make it interesting.

So far the fishing is still pretty good across the board, but the early flurry seems to have died off. Other than Buddy Gross (who just added a 2-pounder for his fourth), nobody has really shown out yet, but it might be coming.

Scott Suggs has put his first in a boat, a 2-pounder he caught on a spinnerbait in the grass. Andy Morgan has two in the box that go about 5 pounds (caught very close together). Peter T has his second, a decent keeper, but the big story for him is a 4-pounde the lost right at the boat. Finally, Jeff Sprague is sitting on three keeper that are all around 15 inches.

Nobody has a better shot at catching Buddy Gross than his travel partner Michael Neal, but so far things aren’t going great for him. Fishing out of a borrowed boat due to mechanical issues, the first two spots Neal headed for were occupied by locals. Once he sat down on his third spot, a barge almost instantly rolled by and pushed him off. Now, he’s moved on down to a fourth spot, still with no luck.

Elsewhere, Randy Haynes is on the board with a small keeper, Stetson Blaylock has his first, Wesley “Superbass” Strader his a 2+ in the boat, Scott Suggs is still on a blank and Travis Fox has two for a little more than 5 pounds.

7:13 a.m.: The fish are biting and Gross is still cooking

Day three is off to a pretty blazing start so far. Top of the heap is Buddy Gross, who caught a 2-pounder on his fifth cast of the day and caught a 3+ largemouth shortly thereafter. Moments ago, Gross stuck a 5-pounder as well. Looks like someone is really going to have to beat him to win this thing.

Behind Gross, there’s a lot of catching going on as well. Travis Fox has landed one 2+ smallmouth so far, and he’s got a big school of them fired up. Unfortunately, he can’t get them to stick on his swimbait so far. Elsewhere, Barry Wilson and Mike Surman have landed 2-pounders and Peter T is on the board with a 3+. 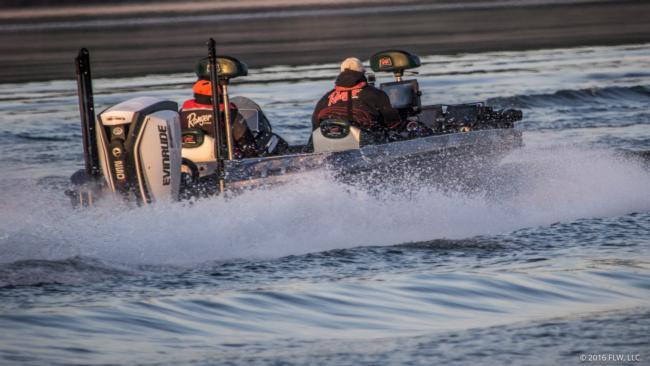 Day three of the Walmart FLW Tour presented by Quaker State on Pickwick Lake looks to be just about perfect. It’s cool, but far from cold to start and the wind is forecast to stay under 11 mph all day. All told, this is likely the best day yet for pros to really make the most of the legendary fishery that Pickwick is.

The goal of the day for Buddy Gross is to extend his lead, or at least maintain it. For the rest of the top 20, it’s about closing ground before the final day in hopes of knocking off the rookie pro who has convincingly lead each day of the event.

Ledges, smallmouth, a shad spawn or something shallow – it’s still all in play on Pickwick.

Watch the day-three weigh-in live at FLWFishing.com starting at 4 p.m. CT or come down and watch in-person at McFarland Park at 200 Jim Spain Drive, Florence, Ala., 35630.