Day two of practice with the former motocross racer 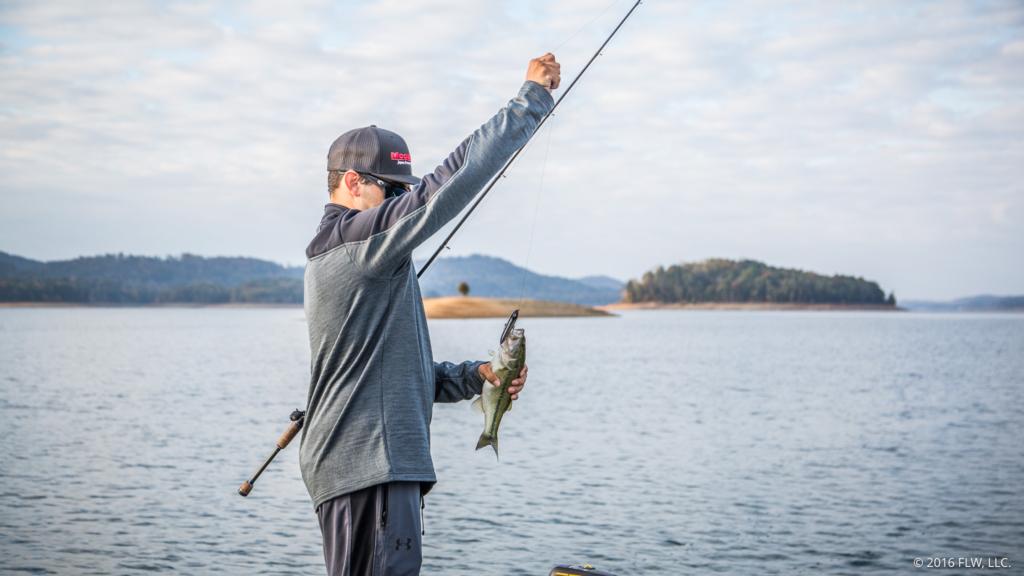 Norris Lake is new for many fishing the Walmart FLW Tour Invitational presented by Quaker State this week, but it is especially new for Chris Gosselaar of Fresno, Calif., who has spent the majority of his fishing career out west to this point. After making the cut at the first Invitational on Lake Norman, Gosselaar seemed like a good person to check in with to see how his practice is shaping up at Norris. We tagged along on his second day. 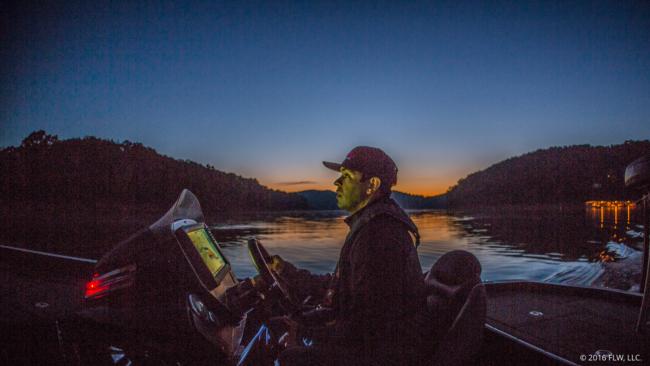 I meet Gosselaar at a group of condos where he’s staying for the week. Staying on the water puts you a little bit farther from town, but it has its advantages. Being able to walk down and untie your boat to start the day is much easier than navigating a bunch of windy east Tennessee roads to get to the ramp. After idling out of the no-wake zone by the docks, he makes a short run to a clay and gravel bank to start the day. 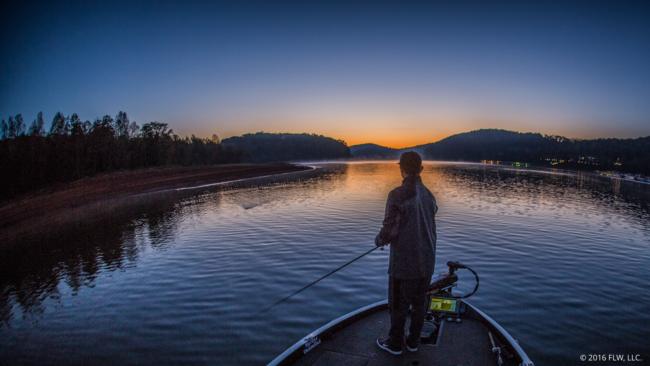 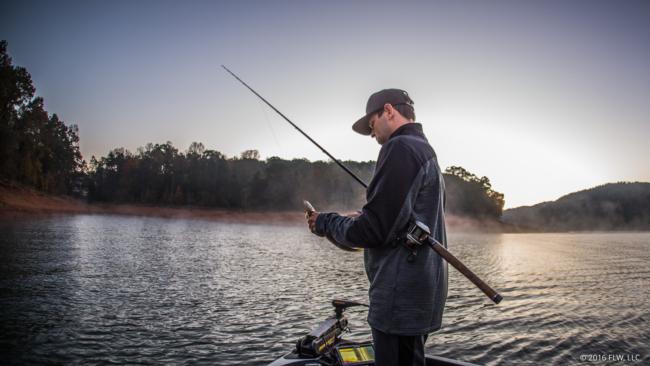 Gosselaar begins with a pair of topwaters that he methodically works down the bank. He’s looking for a repeat of the first morning, where a quick flurry produced nearly 16 pounds and a few smallmouths that surpassed the 18-inch minimum size limit. On Norris, that 18-inch smallmouth is a premium fish. It’s a pretty standard limit in Tennessee, but it can make targeting brown fish tough, even on stellar smallmouth fisheries such as Norris and Dale Hollow.

This morning, Gosselaar starts with a small largemouth that is almost certainly under 14 inches, but can’t replicate another flurry. Though he does see one fish break that he’s almost certain is a smallmouth, he leaves for the next stop with just the one bite. 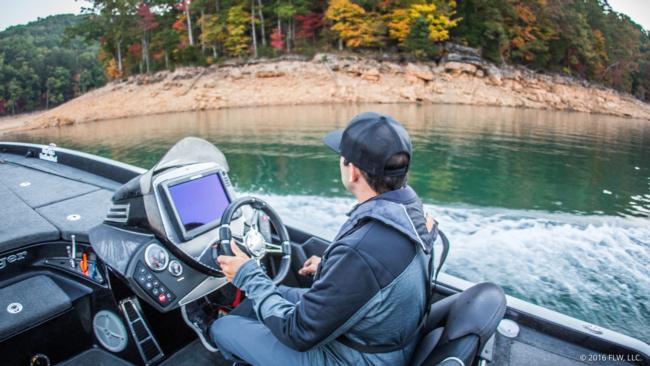 After changing out one topwater for a different color, Gosselaar cranks up and rolls from his main-channel bank to the back of a pocket.

Gosselaar says that he’s only been fishing about four years. Before that, he made a living as a motocross racer.

“I did that my whole life,” says the low-key Californian. “Until I was 30. You either age out of it or break yourself out of it.”

Now, he’s doing his best to find a way into professional fishing. 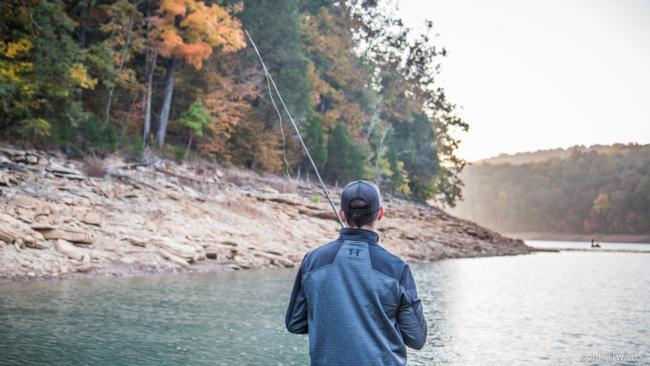 After working down a bank studded with laydown trees (Gosselaar says he hasn’t caught a fish off wood yet), he picks up and moves again. The next stop is another pocket, this one with less wood and a steep rocky bank.

Mixing between a topwater and a shaky head, he explains that though he’d rather fish fast, he’s turning into a shaky head fan.

“I’m not a finesse fisherman,” says Gosselaar, defying the West Coast stereotype. “But, this year, just about anytime I cash a check it’s with this bait.”

Though he spots an otter swimming in the back of the pocket, Gosselaar doesn’t connect with any bass. It’s time to go again. 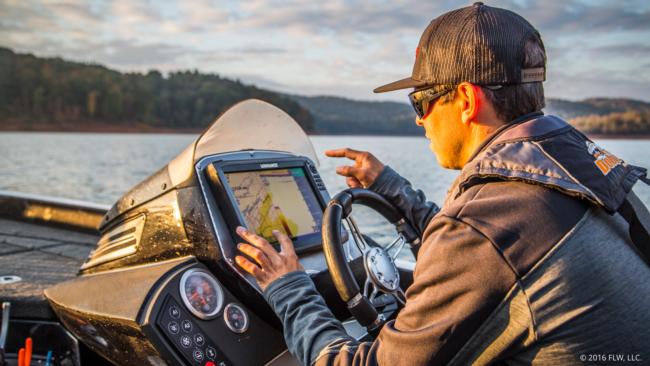 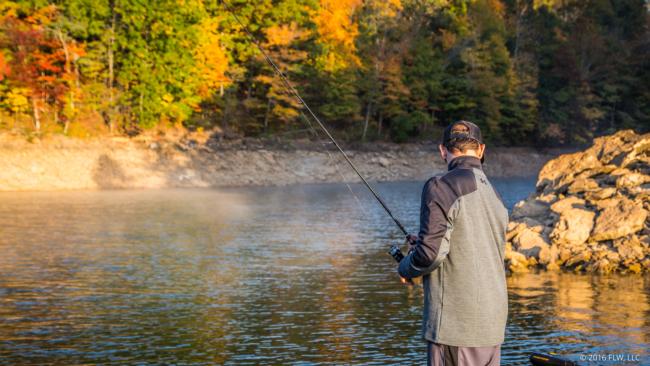 Gosselaar takes a moment to consult the Navionics map on his Lowrance and then cranks up and runs to a bluff end, where the point of a pocket meets a bank that transitions down to a nearly sheer bluff. In the summer, it’d be hard to pick out the bluff along with the rest of the bank, but Norris is about 20 feet below full pool now (normal for this time of year), and a whole lot of extra bank is high and dry.

At the point, Gosselaar grabs a drop-shot and crawls it through a pile of rock and brush while he keeps a close eye on his electronics. He gets no takers, and the experience adds to the mystery of Norris. For a lake with some real dandies in it, Norris has challenged Gosselaar, and he’s struggled to get bites of any kind. 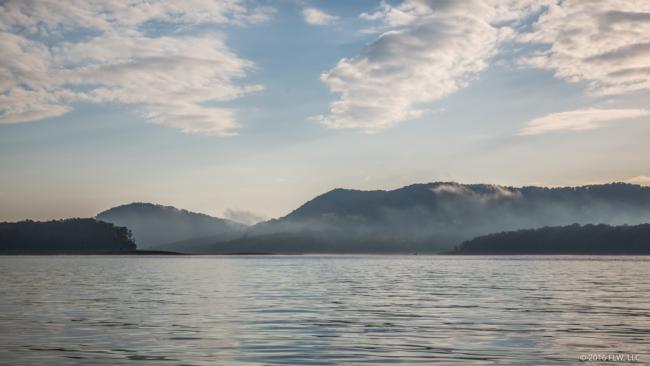 His next move is out into the eastern basin of the lake. Norris is huge and sprawling. To the north and west of takeoff at Anderson County Park there are three large arms (Cove Creek, Big Creek and Powell River), each of which could be a decent lake in its own right. To the east, the Clinch River forms a big basin (the Loyston Sea) and then continues winding northeast for miles. The majority of the shoreline is undeveloped. The Chuck Swan Wildlife Management Area spreads between the Powell and Clinch arms, and the Appalachian Mountains cradle the whole thing. 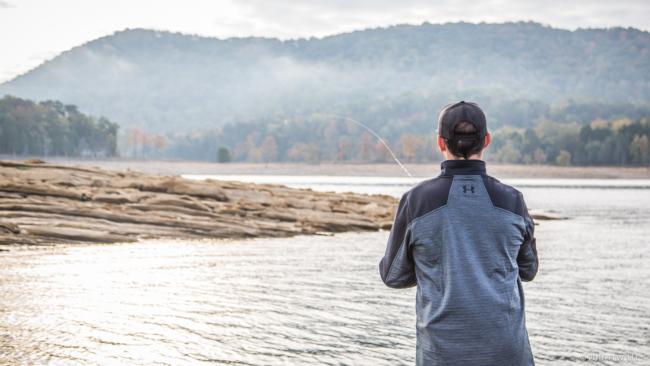 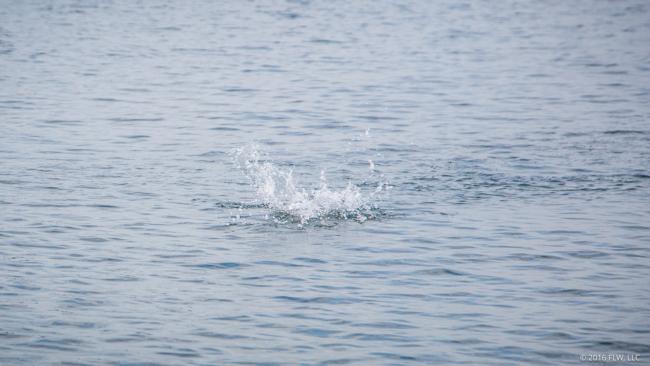 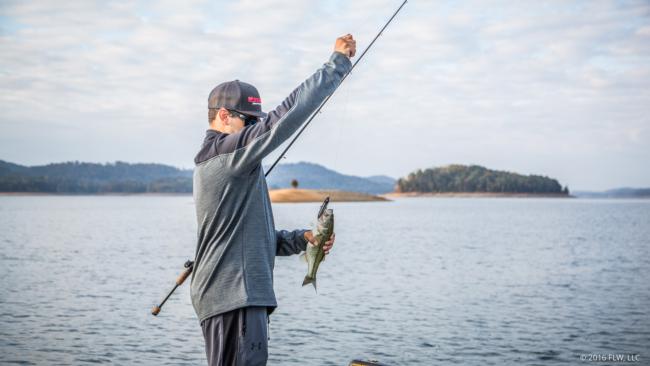 The first stop in the Loyston Sea is at a recently exposed hump on the west shore. As the sun begins to rise into some light clouds, Gosselaar picks up a topwater. He works three-quarters of the hump before connecting and bringing a keeper largemouth into the boat. Because of that, Gosselaar makes a quick and fruitless stop at another hump before changing things up. 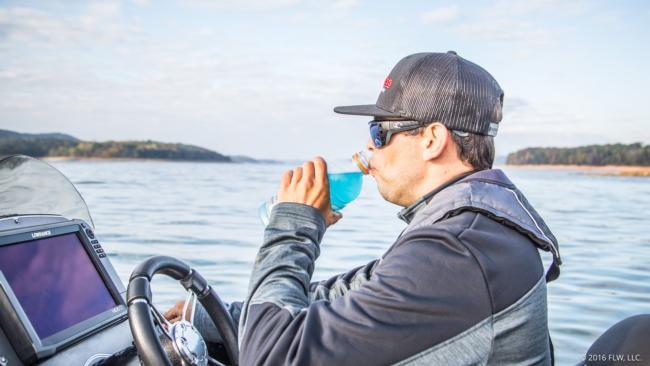 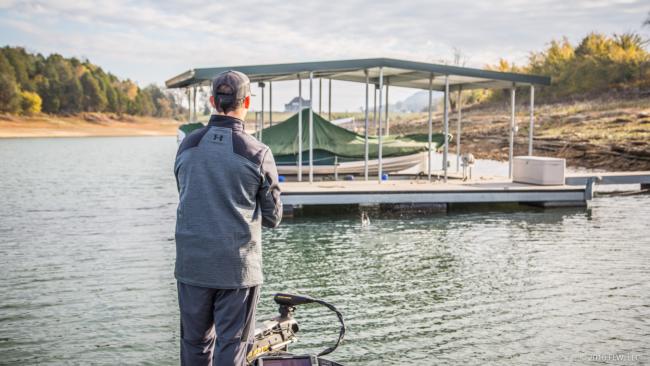 Gosselaar grabs a swig of Gatorade before moving to the next stop – one of the rare non-marina docks on Norris. He makes a few quick casts under and around the dock before hanging on a cable. He says that most of the docks on Norris have more cables than you can shake a stick at, which ratchets up the degree of difficulty for dock-fishing by a significant margin. 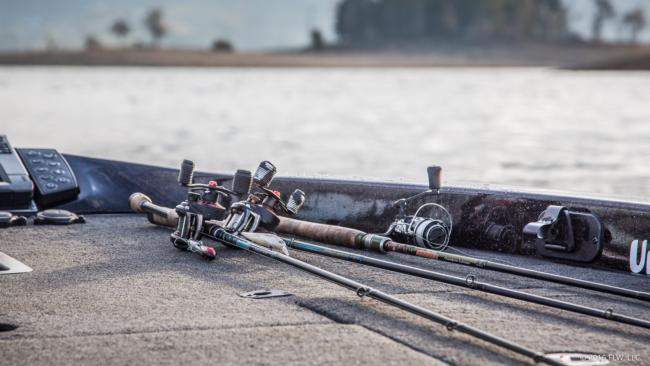 Through the morning, Gosselaar keeps his selection of Dobyns rods to a minimum. He says that by the end of day one he had a huge pile on the deck and is making a conscious effort to be a little more of a minimalist today. With a group of topwaters, a jerkbait and some finesse stuff on deck, he’s giving himself a good range of options. 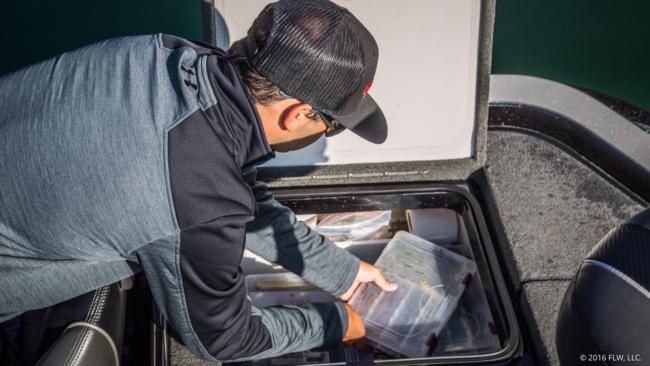 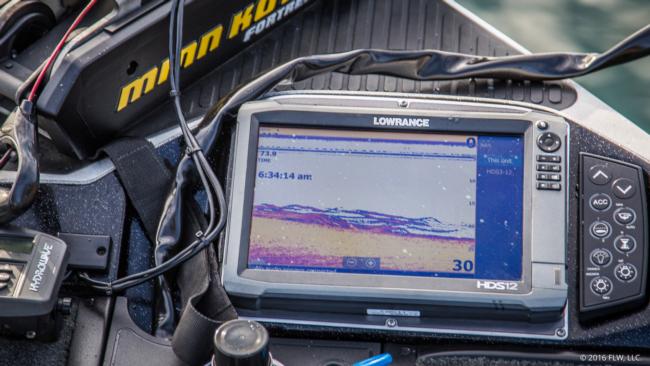 Moving again, Gosselaar begins the hunt for some bait. He says the place where he caught fish on day one had plenty of small minnows, and he’d like to replicate it. On the hunt, he runs into a very interesting pile of fish, but he can’t get them to bite. He doesn’t quite throw the tackle box at them, but he gives it a good go. He also makes a note to set the clock on his Lowrance – Norris ain’t on Pacific Saving Time. 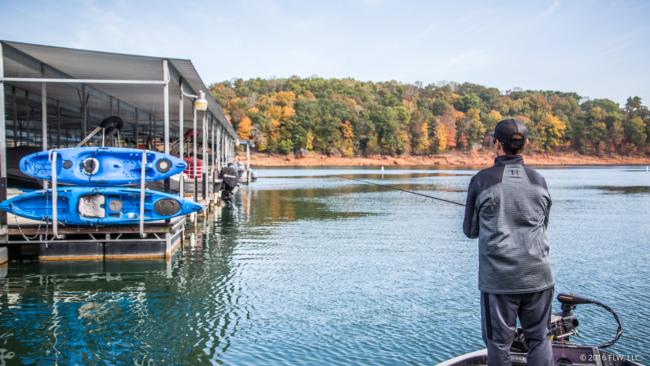 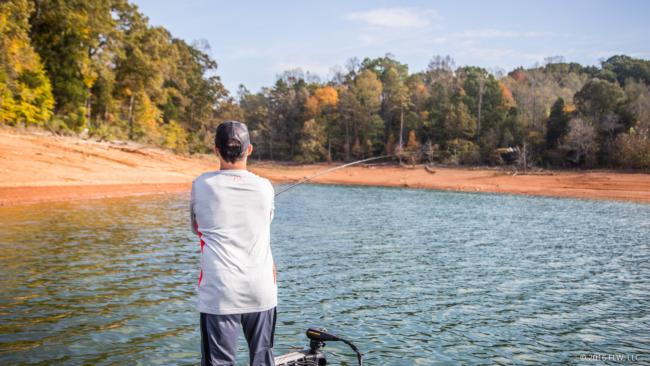 Gosselaar makes another stop out in the basin before rolling back into the narrows for a stop at a section of docks and another stretch of bank. Though it all looks good, it doesn’t produce. 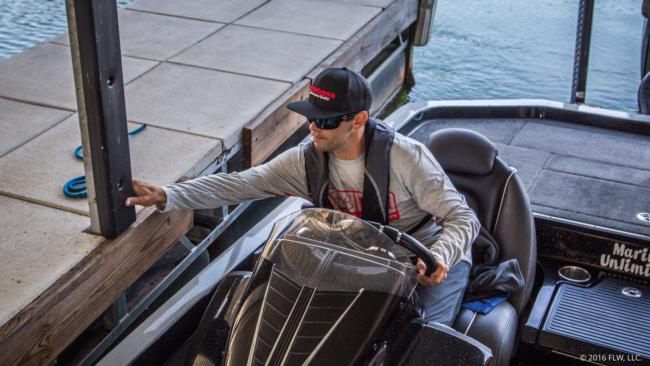 With that, it’s time to call it a morning. Gosselaar needs to run into town to pick up a prescription, and I need to get off and write. After tying his boat up at the docks, we climb up a seemingly interminable stretch of stairs to get back to where the truck is parked.

Four years ago, Gosselaar quit racing and bought a 17-foot Ranger boat and started fishing nearly every day. Last month, he made the top 20 in the Invitational on Norman, his first foray above triple-A competition. After our day on the water, he’s got about a day and a half of practice left before his second at bat in the big leagues.