How much will Norris’ smallmouths factor into the Invitational outcome? 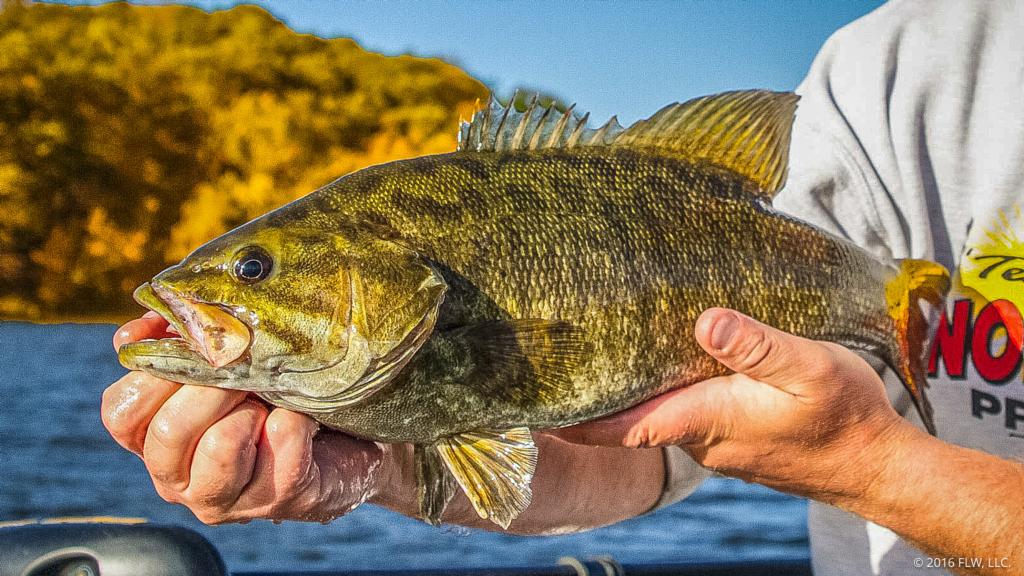 Smallmouth fishing in east Tennessee in early fall can be a frustrating job. You run around the lake, casting and graphing, and the whole time you know there are 5-pound-class smallmouths somewhere right around you. Yet, they just don’t seem to cooperate. That’s because it’s not quite “smallmouth season” in this part of the country until the baseball playoffs come to an end and deer hunting picks up.

The pros fishing the Walmart FLW Tour Invitational on Norris Lake in Tennessee are dealing with that very scenario to some extent this week.

Norris is loaded with smallmouths – big ones – but many of the lake’s biggest brown fish are still in transition or even still in their summertime patterns. The region’s famous fall and winter smallmouth bite is still a few weeks away.

Most of the pros have suggested that cooler weather would greatly help the smallmouth bite, and there happens to be a cold front and storms in the forecast for the region on Thursday, with temperatures forecast to drop some 20 degrees on Friday and Saturday.

Will the change ignite the smallmouth bite or be too little too late? To get a prediction and learn a little more about what’s up with these obnoxious Tennessee smallmouths, we tracked down a couple of FLW Bass Fishing League Volunteer Division standouts – Derrick Snavely and Tim Smiley – to seek some intel.

They offered a pretty good picture of what to expect. 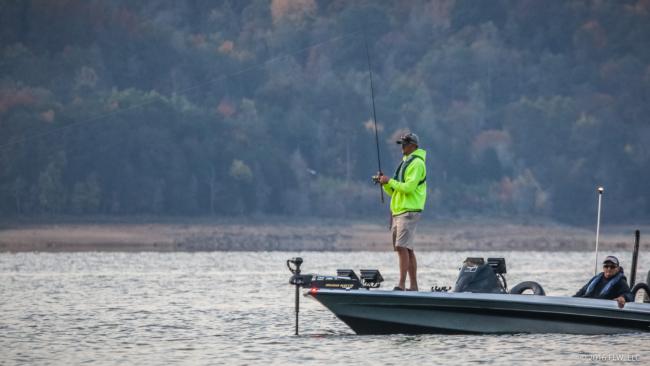 Anglers in practice have located some smallmouths shallow, in various areas with topwaters and also out deep, though few have been willing to admit to a really strong pattern.

Snavely and Smiley agree that the bulk of the big smallmouths are still suspended in deep water at Norris. Suspended bass are regularly some of the toughest to catch for tournament anglers. East Tennessee smallmouths are also notoriously unreliable, particularly when suspended. They’re nomads, you could say, and they just go where the shad and alewife schools go.

“They’re in a transition period, moving from summer locations into fall and wintering locations, and they’re just chasing bait more than anything right now,” says Snavely.

A former Tour pro and one of the anglers who tied for the win in a BFL on Norris back in March, Snavely isn’t fishing this tournament because he took a week off from his job in insurance sales earlier this month to fish the Kerr Lake BFL Regional and qualify for the All-American. Though he couldn’t get more time off to fish the Invitational, he’s been on the lake recently and had a pretty good outing by vertically fishing for suspended smallmouths hanging out about 24 feet deep over a 35-foot break line on the edge of a flat.

“I think they’re pretty easy to catch, but the one thing is there’s always some mystery to them,” Snavely says about the deep smallies he caught. “They’ll be there one day, and the next day they won’t.”

Don’t be misled by “pretty easy to catch,” however, as Snavely indicated that the potential right now is not as good as it is later in the fall, when 20-plus-pound stringers can be had by fishing crankbaits, jigs and jerkbaits in shallow water, which is the pattern most of this week’s competitors wish they were fishing.

Two factors are working against the Invitational field right now. First is the moon, which was full over the weekend and is currently in the waning gibbous phase. In other words, it’s big and bright, which makes the nighttime feed even easier for smallmouths (the night bite is pretty dang good in this region throughout summer, by the way). The biggest factor is the temperature. Daily highs recently have approached record levels in the upper 80s. The heat has held back the water from cooling off.

“It’s more about water temperature for smallmouths than it is anything else,” he adds. “They just like cooler water. It [smallmouth fishing] is normally really good when the water is in the mid-60s to mid-50s. It’s still mid- to low 70s. They’ll bite at night but won’t bite too great during the day.”

Thursday’s high is forecast to be 84, but the storm that’s supposed to be coming should cool things off into the low 60s for highs on the last two days of the tournament.

That in mind, Snavely and Smiley agree that there’s a good possibility of a strong topwater bite as the cold front makes its way through the region. Ensuing wind, rain and overcast conditions – smallmouth weather – will extend the topwater bite, particularly in the mornings, since the fish will still be shallow from nighttime feeding.

However, they disagree on how the tournament will be won.

“Topwater could get better with the cooldown,” says Snavely. “It should be a really good opening day of the tournament. I don’t think the biggest majority will be caught shallow. I think whoever finds that deeper [smallmouth] pattern is going to shine.

“With the TVA, especially on these northeast Tennessee lakes, they’re always changing the water levels. I like something deeper because it’s a lot more consistent. If they do drop the water they’ll still be around.”

Smiley is in the largemouth camp.

In the end, it’s fall in the South, and fall fishing is almost always a challenge. Mother Nature hasn’t helped the smallmouth bite leading up to the tournament, but she might gift the anglers the type of “smallmouth weather” that can change the bite in the short term. We won’t know if it’ll be enough to fend off the largemouth crowd until the anglers start to weigh in at Anderson County Park at 3 p.m. on Thursday.