What got the job done on the massive Kentucky reservoir 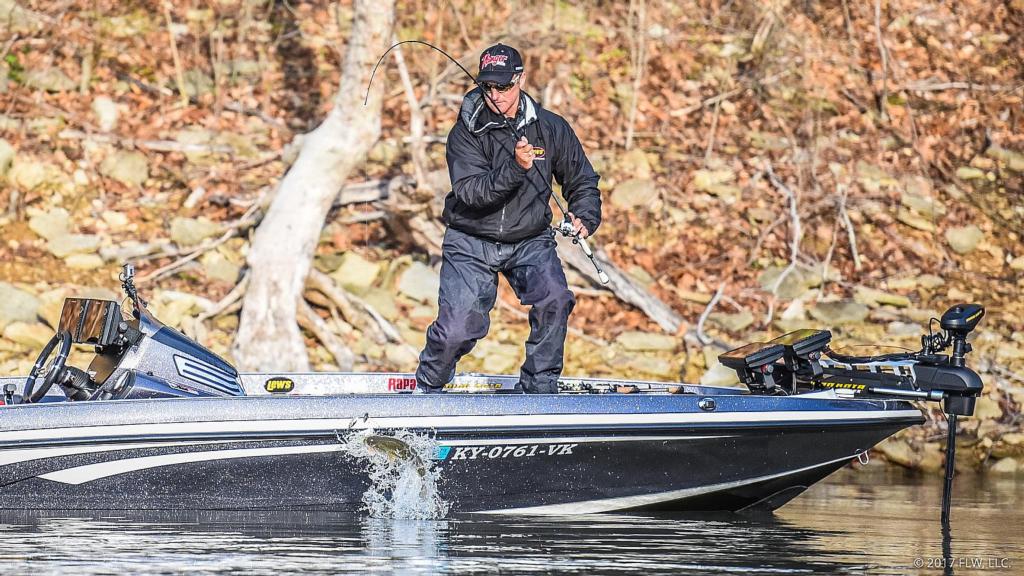 Despite Lake Cumberland’s overwhelming size and sprawling complexity, those who did well in the FLW Tour presented by T-H Marine actually kept it quite simple for patterns.

Scott Martin won the event throwing a deep-diving suspending jerkbait and a wake bait around a multitude of bush-lined drains and pockets in the lake’s lower end.

Jerkbaits were a big player throughout the top 10, as were spinnerbaits. Some top pros went “old school,” fishing gaudy ½-ounce spinnerbaits in flooded bushes. In general, the smallmouth favored jerkbaits out on the points and the largemouth were more partial to spinnerbaits in the bushes in the backs of the drains. 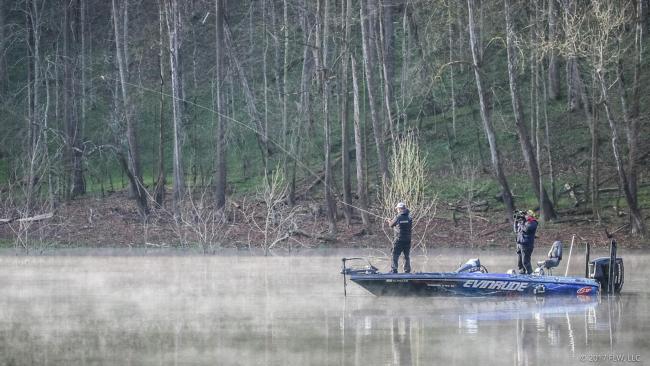 Barry Wilson of Birmingham, Ala., turned in the best performance of his FLW Tour career at Lake Cumberland, finishing second with a total of 58 pounds, 6 ounces.

While others were running far down the lake to fish mixed species water, Wilson made a serious run at the trophy with a largemouth game plan in the back of White Oak Creek near Burnside.

“The spot was loaded with shad, I could see them flicking on the surface across the entire area,” Wilson says. “The more they flickered, the more active the bass became, which usually happened in the warmth of the afternoons.”

Wilson’s best lures for fooling the largemouth included a Booyah squarebill (craw) crankbait and a ½-ounce Z-Man ChatterBait teamed with a YUM Pulse swimbait (both white) and both fished on 15-pound test P-Line Ultimate Fluorocarbon on Lew’s rods and reels.

He used the squarebill to cast up into the flat to fish shallow objects like bushes and grass and then used the ChatterBait to fire out into the main channel and work the ChatterBait up the ledge with a lift and drop retrieve. 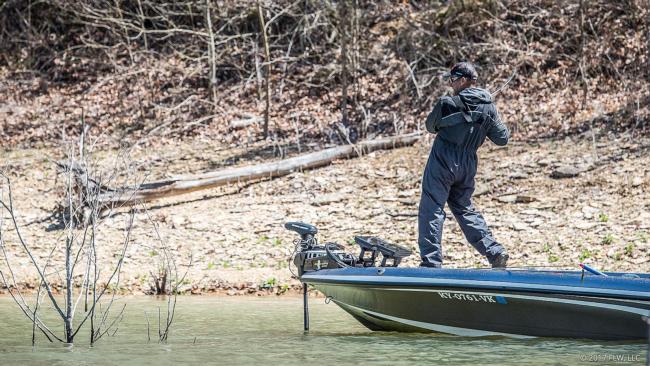 Terry Bolton of Paducah, Ky. moved up to his best spot of the week to finish in third with a three-day total of 57-5.

Bolton targeted largemouth from the beginning in the Caney Creek area.

“It was a pretty simple week for me, really,” Bolton says. “I just went fishing old-school in flooded bushes with spinnerbaits. I would slow roll the blades so they just ticked the tops of the submerged sycamore trees in 4 to 8 feet of water.”

His choice of spinnerbaits included a ¾-ounce Accent River Special and a ¾-ounce War Eagle, both with willow leaf blades and trailed with a Zoom Split Tail Trailer. He fished the spinnerbaits on 20-pound test Suffix Elite monofilament on a Lew’s Custom Speed Stick Lite 6’-10” spinnerbait rod. 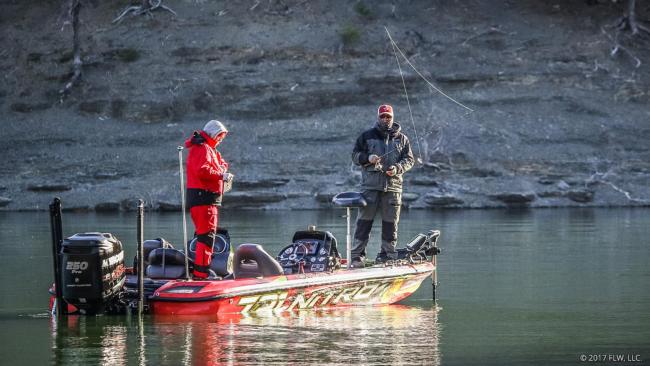 After finishing fifth at the FLW Tour stop on the Harris Chain of Lakes last month, Matt Reed of Madisonville, Texas, scored another top five at Cumberland, finishing fourth with a total of 55-15.

Reed says he “just went fishing” all four days with a jerkbait to amass his catch.

“Seldom do I put my trolling motor down and just fish the banks until it’s time to go in,” Reed says. “But that’s pretty much what I did here. I ran to Beaver Creek, picked a different section each day, and just fished what was in front of me until it was time to go in. Some of my better fish came off the standing bushes that were sitting in the middle of the drains.”

Reed’s primary bait of choice was a SPRO McStick jerkbait in a blue bandit color fished on 10-pound test fluorocarbon line. He also caught a couple off of a Profound Azuma Boss Hawg, which runs 8 to 10 feet deep. 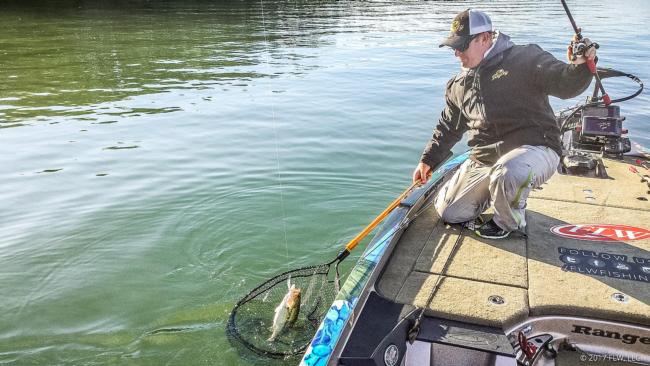 Scott Canterbury of Springville, Ala., finished the tournament in his best position of the week, fifth with a total of 55-7.

Lake Cumberland’s vastness landed right in Canterbury’s wheelhouse, giving him plenty of room to run and gun, which is his favorite way to fish. He started the event with a jerkbait, but ended it by flipping a jig.

“The first day, with all that weather, I fished the jerkbait all day, but once the sun came out and things got calm later in the week, I think a lot of those fish moved to wood, so I pretty much flipped a jig all day on the last day.”

When jerkbaiting, Canterbury used a chartreuse colored jerkbait in the cloudy, rainy weather and then switched to a shad-colored model when the skies cleared. He fished the jerkbaits on 10-pound test fluorocarbon on a 7’-2” Halo medium action rod with an Ardent reel.

For a jig, Canterbury used his own signature series Dirty Jigs Canterbury Flippin’ Jig in ½- and 5/8-ounce sizes. His preferred jig color was Canterbury craw and he used a NetBait Paca Chunk as a trailer. 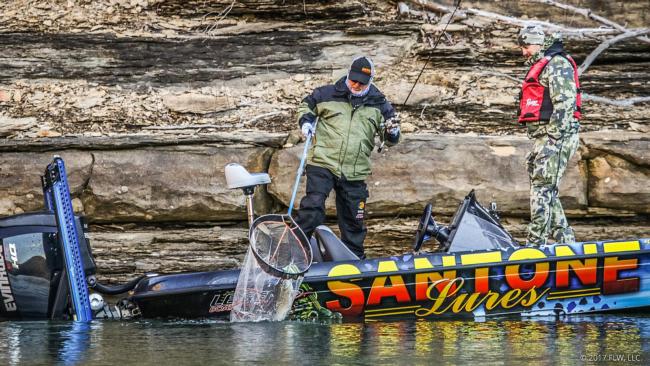 Chris McCall of Palmer, Texas finished the event in sixth place with a total of 53 pounds, 10 ounces.

Before the cutoff McCall got a tip that pink spinnerbaits were a thing on Lake Cumberland, so he had Santone Lures make him some pink spinners and sure enough, they worked.

His choice of jerkbaits included a Lucky Craft Slender Pointer 112 and a Megabass Vision 110, both in a blue chartreuse color fished on 12-pound-test fluorocarbon.

“I fished in the Indian Creek area and I used the jerkbait to catch smallmouth out on the points and the pink spinnerbait to catch largemouths out of the bushes in the backs of pockets,” McCall says. “It was a great one-two punch for catching both species.” 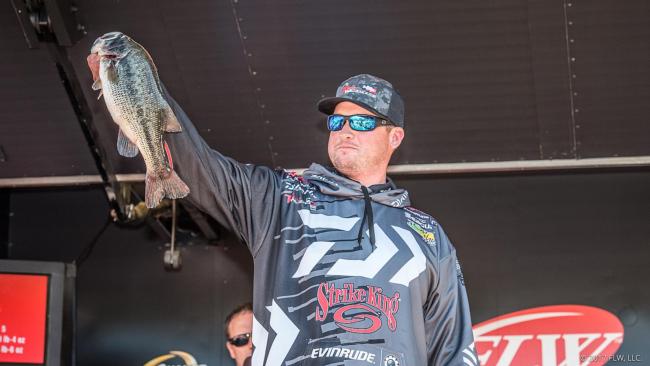 While many in the top 10 used jerkbaits and spinnerbaits, Cody Meyer of Auburn, Calif., found success with swimbaits for a seventh place finish with a total of 53-8.

“I used one bait all week,” Meyer says. “A 3.75 Strike King Rage Swimmer (ghost shad) on either a 3/8-ounce or ½-ounce head. I used it to targets points, trees, docks, bridge pilings – really anything vertical in the water.”

Meyer swam the bait down to 7 to 10 feet on 15-pound-test, Seaguar Tatsu line trying to target spotted bass that were suspended around the vertical objects.

8. Scanlon ‘homes in’ on eighth

Casey Scanlon of Lenexa, Kan., was “right at home” on Lake Cumberland, fishing it just like he would Bull Shoals or Table Rock back home. Scanlon reached his highest point in the tournament after day two when he was in second, but eventually fell to eighth with a total of 51-11.

“I had an area down in Indian Creek that reminded me so much of the Ozarks back home,” Scanlon says. “I could catch all three species in the areas I was fishing; it’s not like I was excluding a species with my water selection – I weighed in all three species during the week.”

Scanlon’s lure choices included a Luck-E-Strike RC STX suspending jerkbait in herringbone chartreuse. To get the bait down deeper into the 5- and 6-foot zones he added weight to the belly of the jerkbait and fished it on 10-pound test Maxima fluorocarbon. He fished the jerkbait out on points and down the sides of pockets.

When Scanlon fished into the back of a pocket with bushes, he used a ½-ounce spinnerbait with white and chartreuse blades.

“That was like old school springtime fishing in the Ozarks,” Scanlon says. “I’d roll that spinnerbait through those bushes and the largemouths would clobber it – it was some awesome fishing.” 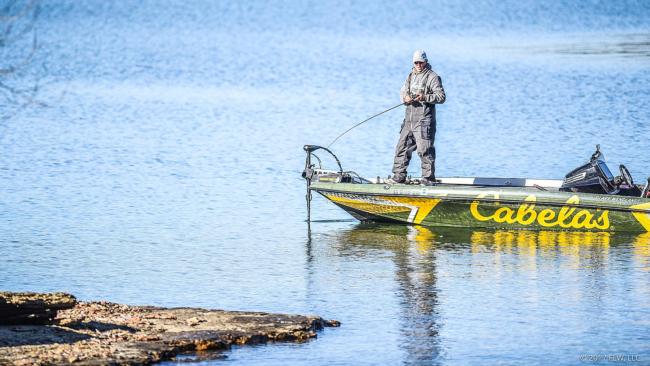 One of the complete shockers of the week was when tournament leader Clark Wendlandt of Leander, Texas showed up empty-handed at weigh-in on day four, losing his lead and falling all the way to ninth place.

All week Wendlandt chose to dance with the dicey smallmouth game and he made it work for three days, weighing in mostly hefty smallmouth keepers to lead on days two and three. But on the final day, the keeper smallmouth gave Wendlandt the slip in a big way, refusing to cooperate at all.

“Those reservoir smallmouth are pretty fickle,” Wendlandt says. “The windows for catching them are so short and specific. The first three days I did a pretty good job of keeping up with them. On day three I made an adjustment from a jerkbait to a crankbait that I thought was going to be the winning move for day four and it just didn’t pan out. I never made contact with those bigger smallmouth on the final day. All I can guess is that they finally went on beds and I was fishing over them because I refused to slow down and fish on the bottom.”

During the week Wendlandt did most of his damage with a pair of suspending jerkbaits – one had a deep lip and the other had a shallow lip. He used the deeper-lip model when fishing down the steeper sides of points and the shallower lipped model when fishing bushes in the actual backs of the pockets. He fished both jerkbaits on 10-pound test Sunline Sniper.

On day three, Wendlandt switched to a crankbait (10-foot runner) and paralleled ledge rock on 12-pound test Sunline Sniper to get the bait down to the 9 to 11 foot zone. 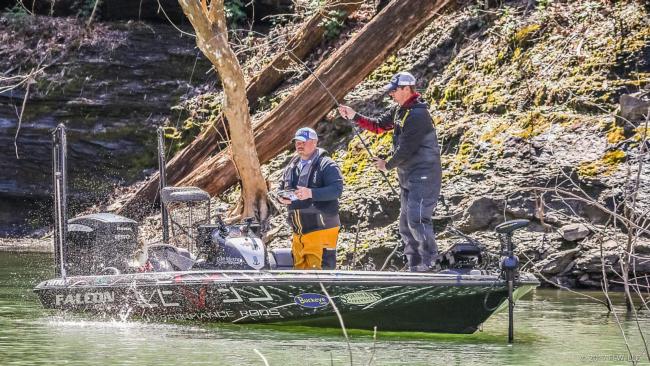 Anthony Gagliardi of Prosperity, S.C., rounded out the top 10 mostly by using a floating worm fished around bushes in the Conley Bottom and Beaver Creek areas of the lake. His worm of choice was a weightless Tightlines UV 6-inch straight-tail worm (merthiolate) tied to 10-pound test fluorocarbon leader and 8-pound test braid.

“I was focusing on the pockets where the bushes were sparsest,” Gagliardi says. “I didn’t much care for those pockets that were so packed with bushes I couldn’t even make a cast to the bank. If a could find a pocket with just a couple of bushes with a run-in in the back, those were the best ones for largemouth.”