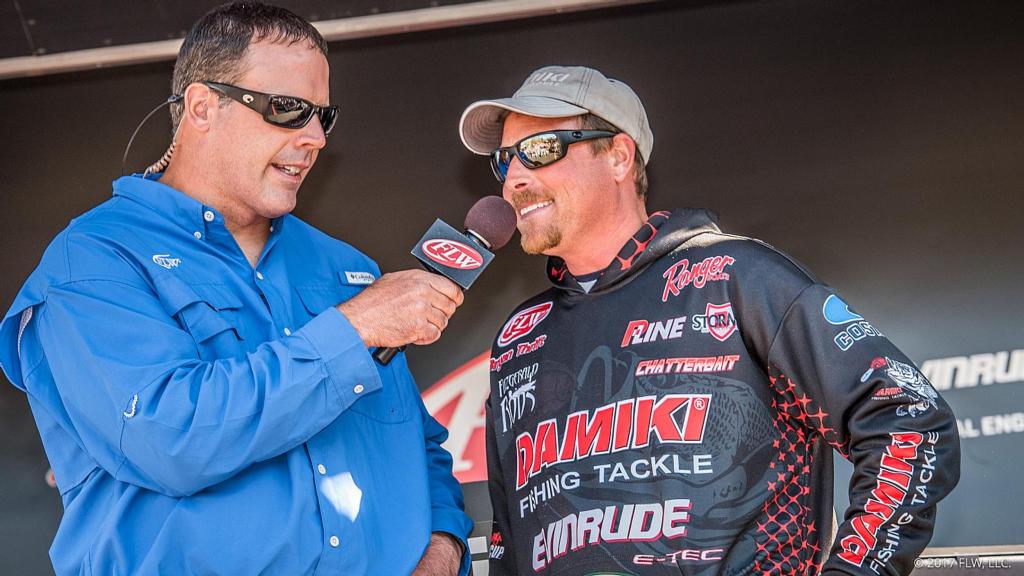 Bryan Thrift finally faltered. In a stunning turn of events, the hottest angler in the world finished outside the top 10 for the first time this season, chalking up a 12th-place showing in the FLW Tour event presented by T-H Marine on Lake Cumberland.

Clark Wendlandt held steady in his pursuit of Thrift at Cumberland, but some of the other prime contenders dropped out of the race.

Here’s how the AOY race breaks down with only three events remaining. 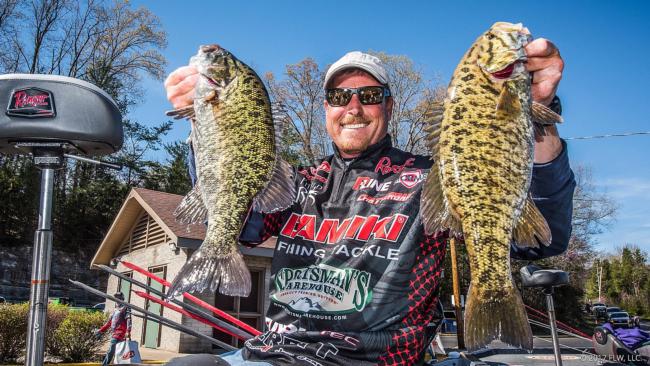 Bryan Thrift is setting a pace unseen since 2014 when Andy Morgan and Cody Meyer lapped the field and battled until the end for the AOY, with Morgan coming out on top. In four tournaments this year, Thrift has finished second, second, sixth and 12th. It’s pretty unreal. He now holds a 52-point lead over Clark Wendlandt, who is his closest competition.

With three tournaments left, Thrift has a significant lead, but it’s not insurmountable. The last two events on the Mississippi River and the Potomac River figure to be particularly interesting. It was at the Potomac in 2015 that Thrift coughed up the AOY lead to Scott Martin, and he quickly admits his distaste for river fishing. Even though the last two events aren’t strictly in Thrift’s wheelhouse, it’s hard to see the wily North Carolinian giving up the lead easily. He almost never truly bombs an event. 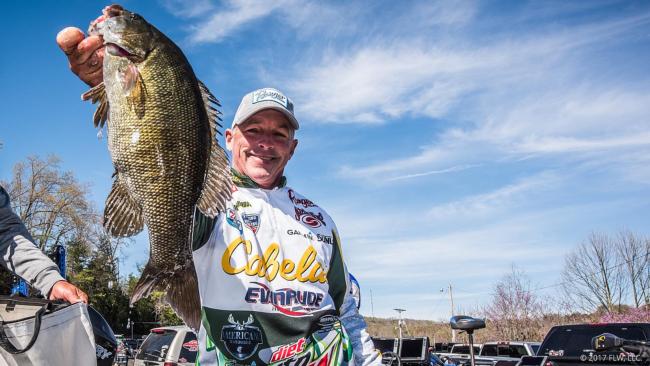 Clark Wendlandt might well be leading in an ordinary season in which everyone has settled for at least one or two “decent” finishes, but Thrift isn’t fishing in an ordinary way this year. Wendlandt’s stumble came in the opener on Guntersville where he finished 49th, only bringing three to the scale on day two. Other than that, the lowest he’s placed was 11th at the Harris Chain.

If Wendlandt is to catch Thrift, he’ll have to get back to his roots as “Mr. Beaver Lake” for the next tournament, figure something out at the Mississippi and then look to continue his excellent record at the Potomac (he won there in 2015). None of it is out of the question. Wendlandt is a living legend, and he’s fishing as well as he ever has. Of course, Thrift letting anyone catch him is far from a certainty.

If the race comes down to single digits at the end of the year it will be hard not to look at Wendlandt’s zero on the final day at Cumberland. Falling from first to ninth with a significant lead is tough. If he’d only caught a few 18-inch smallmouths or some keeper spotted bass he could have easily salvaged a few places. 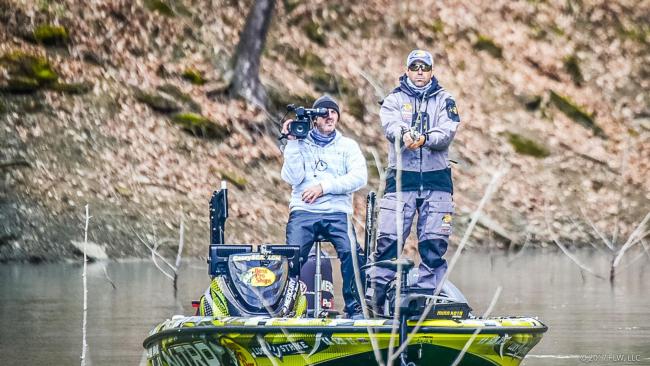 In his first year on Tour, Casey Scanlon, an Elite Series transfer, is having one of his best seasons ever. Like Wendlandt, his only real stumble was at Guntersville, where he still finished 48th and earned a $10,000 check.

Scanlon was all about fishing Ozarks style on Cumberland, so he should be prepared to do well at Beaver Lake. He’s also got some decent history with B.A.S.S. on the Mississippi River, booking a nice 69th-place finish there his first time, and 14th- and 46th-place showings in subsequent journeys. In his one tournament with B.A.S.S. on the Potomac, Scanlon finished 86th, but he doesn’t have enough history there to say for sure that he’s ill-prepared to do well. 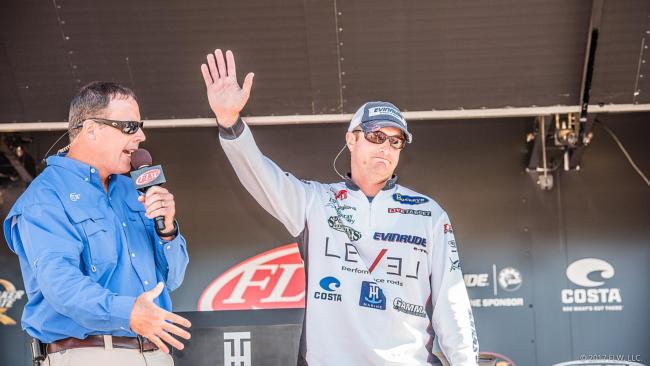 Mark Rose, Scott Canterbury and Anthony Gagliardi are legitimate lurkers. All 80-ish points behind Thrift, it’s a truly terrifying group of superstars to have on your tail. The remainder of the schedule probably sets up best for Canterbury, but the margin is super thin, and it’d be easy to make an argument for any of the three. When it comes down to it, the main thing is that one of this group is virtually assured to be waiting if Thrift somehow stumbles. There’s simply too much talent among them for them to all fall off.

The top 35 pros in the standings will qualify for this year’s Forrest Wood Cup on Lake Murray, and with only three events left in the season, we’re already in the stretch drive. If the season ended today, the Cup cut would extend down through 38th place, as Jeremy Lawyer, Andy Morgan and Bryan Thrift are well inside the cut at the moment and pre-qualified for the Cup via their accomplishments in 2016.

In 39th place (572 points), Jim Jones might be in decent shape to make his first Forrest Wood Cup as a pro. The second-year pro hails from Big Bend, Wis., and definitely has some experience on the Mississippi and the surrounding Northern river systems. A good finish at La Crosse and decent showings at Beaver and the Potomac might put him in.

Matt Stefan missed the Cup last year after qualifying for it in back-to-back seasons. Sitting in 40th (570 points), he’s in a similar position to Jones, with home court advantage in one of the final three events. Considering Stefan’s track record, he looks like a decent bet to make it back to the Cup.

Austin Felix isn’t a big fan of the Mississippi, but he is from the Upper Midwest, and could be in decent shape to do well at the Mighty Miss. At 41st with 570 points, he’d love to get another crack at Lake Murray after struggling there the year he qualified for the Cup as the YETI FLW College Fishing National Championship winner.

Cody Meyer and Matt Arey (both with 567 points) are uncharacteristically scuffling this year, but their all-around excellence and dominance at Beaver Lake ought to put them in the Cup as well. Dylan Hays also has 567 points and is having a great rookie season. He’s hard to project, but there’s no particular reason he can’t hang tough the rest of the season and make it.

In 45th place, Jimmy Reese has 563 points and is coming off an 11th-place showing in the 2016 Forrest Wood Cup. It’s taken the Western veteran some time to truly gain his footing on Tour, but Murray seems like the kind of place he might do well. In 2015, a poor showing at the Potomac River cost him a shot at the Cup. He’ll likely need to master the big East Coast tidal fishery if he’s going to make the Cup this year.

Check out the full standings through four events here. The top 35 in the FLW Tour standings qualify for the Forrest Wood Cup, with additional invitations given when anglers above the cutoff double-qualify through other FLW circuits. The Angler of the Year wins a six-figure payday and a spot at both the 2017 and 2018 Forrest Wood Cups.