Storylines: Pros Jammed Up by Debris 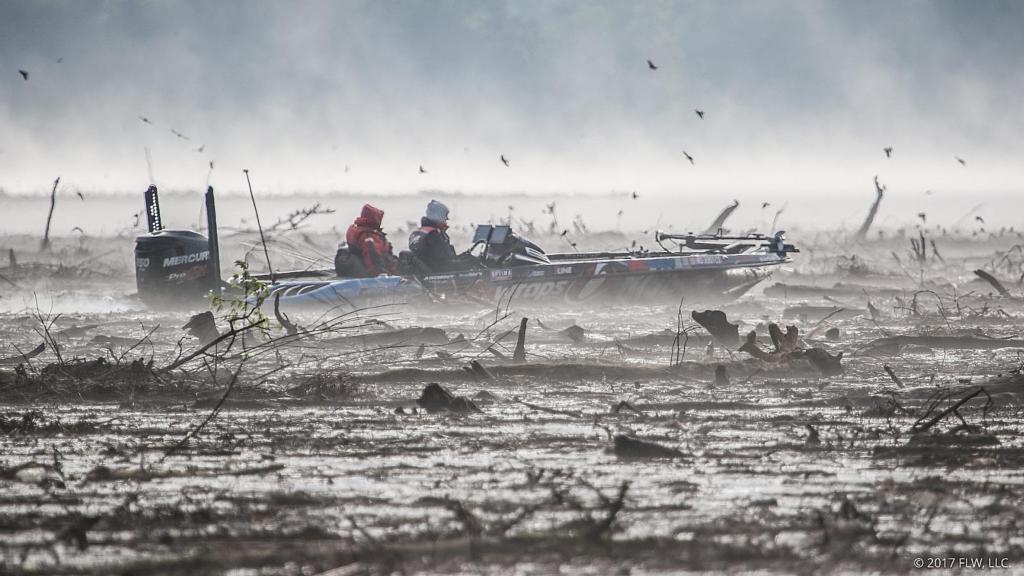 There’s an official off-limits area on Beaver Lake delineated by signs and no-wake buoys around takeoff in Prairie Creek. There’s now also a much larger unofficial one, and it impacted a significant portion of the field on day one. Even worse, no one knew about it until after takeoff on day one of the FLW Tour presented by General Tire.

Greg Bohannan may have been one of the first to find it, and by “it” we mean pretty much anything south of Monte Ne Creek. Recent storms have caused a surge of muddy, cold water into the lake from its tributary rivers and the water has risen more than five feet since Tuesday as a result. As a result, massive amounts of debris have been floated off the bank and into the lake. How massive? When Bohannan turned the corner just south of Monte Ne he encountered a logjam roughly 15-yards wide. After breaking through that, he turned the next bend to find yet another logjam, this one at least 60-yards wide and spanning from shore to shore.

“I was headed to Hickory Creek, but once I saw that I just spun around and went fishing,” says Bohannan.

His was the tale for many pros who had found a great bite in the upper reaches of the lake, where Scott Canterbury won the event last year. Bohannan says he knew the water would get muddy, but being a relative local, he says he’s never seen the lake rise and get this muddy and dirty so quick.

“I’m done up there,” says Bohannan. 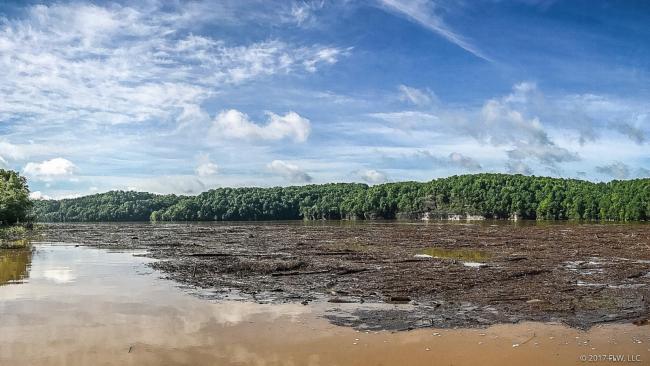 Bryan Schmitt and Brian Latimer both echo that sentiment.

Latimer actually was one of the few pros who attempted to break through the larger log jam, and did so thanks to his familiarity with fishing rivers back home.

“Most of that stuff is just floating,” say Latimer. “So long as you don’t run in too fast and just work your way through, it’ll move out of the way.”

It didn’t do him any good, though, as all he found on the other side was water with maybe an inch of visibility and water temps roughly 8 degrees colder than on the lower end.

Schmitt didn’t attempt to break through the larger jam, but he did idle through the smaller one to hit an area where he caught them well in practice. He and his co-angler both caught fish in the area, but with the water temps so cold he opted to leave and let it warm up before hitting it later in the day. Only, when he came back in the afternoon, both log jams were gone, with much of that debris now covering up the pockets and creeks he wanted to fish.

“I couldn’t even get in,” says Schmitt. “You could walk across the creeks there’s so much debris in them.”

Our on-the-water team monitored the area throughout the day and found creeks as long as 200-yards were completely covered in debris all the way to their mouths, with zero water visible. Also, despite the log jams breaking up, a run a couple miles further found significant debris scattered across the water, making running on pad nearly impossible.

With the water projected to continue rising and more rain in the forecast – which should bring more debris and mud – the upper end of the lake looks like it might be nearly unfishable for the rest of the event.